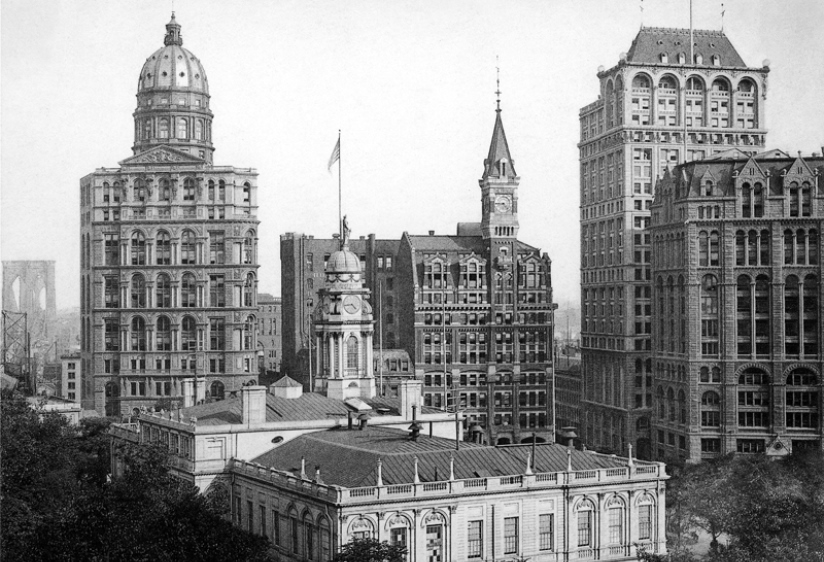 Above: from right to left, the New York Times, Herald, and New York World newspaper buildings, known as ‘newspaper row,’ circa 1906.

The New York World has been accused of sensationalism ever since it was briefly shut down for printing forged documents attributed to Abraham Lincoln, and the paper’s reputation has only deepened as a property of publisher Joseph Pulitzer. Yet it has also been an innovative newspaper, printing the first crossword puzzle two years ago and was first to experiment with color printing two decades ago. The World has also balanced the business-class bias of its rival the Times with muckraking journalism in the tenements and factories, while reporter Nellie Bly broke barriers and helped invent modern investigative journalism — altogether, a good track record of independent and groundbreaking news.

So on August 15th, when the World broke the story of an Austro-German conspiracy to buy American journals and build a nationwide propaganda apparatus, the respected newspaper made waves on both sides of the Atlantic. The German government was embarrassed by the disclosures, which included direct links to Chancellor Theobald von Bethmann-Hollweg and the role of ‘unofficial ambassador’ Bernhard Dernburg. Especially embarrassing was Dernburg’s note, printed on the front page for all to see, asking German-American George Sylvester Viereck for financial control and “an understanding regarding the course in politics which you will pursue, which we have not asked heretofore” in order to fund his Fatherland.

Now embattled by the US State Department, which has requested his withdrawal, the Austro-Hungarian ambassador Konstantin Dumba was also named in the memorandums and receipts. So were the German ambassador, Count Johann Heinrich Count von Bernstorff, as well as German spymaster Franz von Papen and his right-hand man Wolf von Igel.

This correspondence reveals unmistakably that the leading officials of the German Government have had a hand in the promotion of ventures directed not alone at its belligerent enemies with whom it is at war, but, in some instances, at the laws of the United States as well.

The name Dr. Albert Heinrich was also prominent, and that is because the New York World‘s scoop has in fact been supplied by the US Secret Service, which stole his briefcase in July. Two days after the first story, the World published more documents concerning a project to keep liquid chlorine, a byproduct of the American chemical industry, from being supplied to the allies for use as a poison gas. Two days later, another story further exposed plans to monopolize the American munitions industry. The hits have kept on coming. 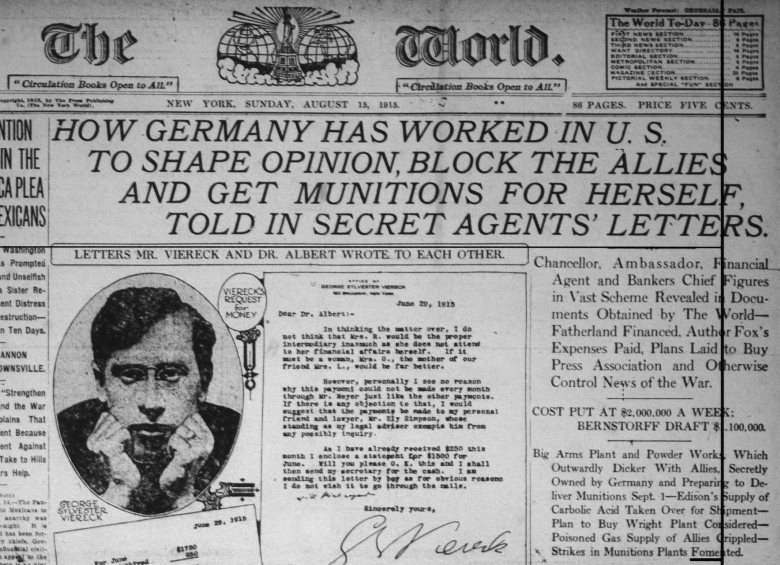 Of course, the Germans are hardly the only belligerent power to expand their public relations footprint in the United States; British intelligence is feedings stories to American newspapers all the time. But the Central powers stand accused of going much further than trying to buy better press. Today, the World publishes its latest investigation of Austro-German efforts to stoke labor battles and mob violence in a front-page piece focusing on the International Longshoremen’s Association and its network of local unions, whose leadership was recently offered generous financial inducements to create chaos in the allied supply system by shutting down the nation’s ports.

(On) the day the Lusitania sank, William P. Dempsey, the secretary-treasurer of the Atlantic Coast International Longshoremen’s Union, met Dennis Driscoll, a Boston labor leader and former city office-holder, at the old Quincy House in Hanover Street. Driscoll said that Matthew Cummings, a wealthy Boston grocer, had outlined to him the plan for the strike, and said he was acting for parties who were willing to pay a million dollars. Dempsey maintained his poise when the startling information was recited, but he was frightened, and at the conclusion of the interview he telegraphed at once to T. V. O’Connor, the president of the union, requesting an interview. The two union men met in Albany and discussed the affair pro and con, arriving at the conclusion that they had best reveal the plot to the Government. O’Connor accordingly told of the negotiations to Secretary Wilson of the Department of Labor, and then in connivance with the Secret Service, went on dealing with the grocer, constantly pressing him for the identity of the principals who, he said, were prepared to supply all the necessary money. He implicated George Sylvester Viereck, the editor of a subsidized German propaganda-weekly called The Fatherland, and said that he had been introduced to him by Edmund von Mach. Neither of those men figured except as intermediaries, and Cummings suggested that Dr. Bernhard Dernburg, a loyal propagandist then in the United States, was the director of the enterprises.

Owing to the high pitch of public feeling over the Lusitania, Cummings could not receive permission from his superiors to go ahead with O’Connor, but he did his best to keep O’Connor interested. The latter, fearing that German agents were at work on the Pacific coast, took a trip to the far West, and during his absence Cummings telegraphed him twice. There the affair ended, for O’Connor ignored the message, and on July 14 returned to New York to find that a German attempt to force a walkout on the New York waterfront had failed, and that Cummings had stopped playing with fire and had gone back to his grocery in Boston.

Particularly alarming to London, the Germans have made special efforts to target Irish-Americans to their anti-British cause. British intelligence is well-aware of these activities, which extend around the world as part of the German conspiracy to foment insurrection across their rival empire. The neutrality violations are what chiefly concern the government of the United States, however; neither the nation nor the president is ready for a call to arms, and the World does not frame the disclosures provided by the Secret Service in warmongering words. Rather, Washington is practicing a policy of diplomatic drift with the Central Powers — and drawing ever closer to a new transatlantic intelligence partner in London. That security relationship still defines our modern world a century later. 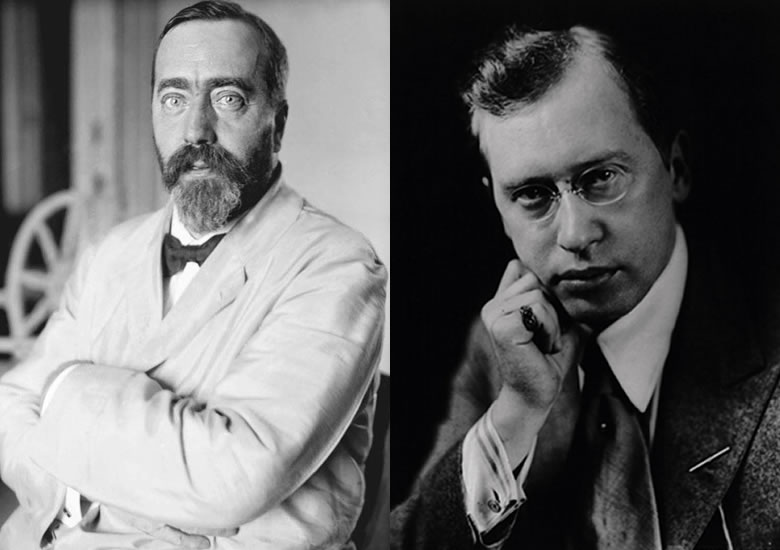 Left: Bernard Dernburg, who modeled German exploitation of Africa on the debt peonage system of the southeastern United States. Right: George Sylvester Vierek, whose fawning pro-German writings eventually lead to support of Hitler and the Nazis