Destroyed a century ago during Napoleon’s defeat by the Russian Army, the Lithuanian capital of Vilnius (see above) has empty streets today, for the Russian Army began pulling back forces from the area a week ago, and over the last few days the sounds of battle have rung over the city, drawing closer by the day, closing now from three sides. German raiding forces and cavalry have attacked the Russian 10th Army’s railroad and communication lines, even derailing a train on the Smorgony-Soly line four days ago during a sharp battle with Siberian infantry. As civilian authorities in the surrounding area began to evacuate, setting fire to government buildings in accordance with Russian scorched earth policy, the roads clogged with refugees, making resupply virtually impossible once the 249th Reserve Infantry Regiment won control of the Vilnius-Daugavpils line yesterday.

Only today do the advancing Germans of the 10th Army realize that Vilnius has been left undefended. So stealthy was the Russian withdrawal last night that the British military attaché Major General Sir Alfred Knox observes: “the town was abandoned, the decision to do so having, as usual, been kept such a profound secret that several officers were left behind in cafés.” Despite a counterattack along the Dvina River today, the German military frontier presses on like a wave through and past the city.

There is still resistance, but not all of it is effective. In the evening, the 249th surprises a Russian unit in the act of digging their defenses, scattering them in the twilight. “Everywhere Russians are on the run,” the unit diary records. “Blood red sky with the reflection of burning villages, the characteristic street lights of retreating Russians.” The wet weather of the last few days lets up tomorrow, relieving everyone who must trudge down the poor roads, allowing the orderly retreat to continue to a new line as the Germans struggle to keep up. 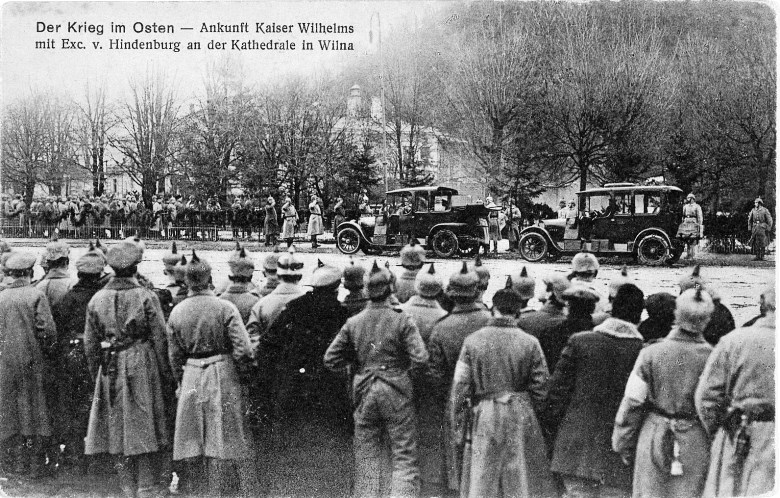 Kaiser Wilhelm II visits the cathedral at Vilnius, the newest conquered jewel in his crown, with Hindenburg in December 1915

Yet the German wave is in fact cresting at last. Field Marshall Paul von Hindenburg and his right hand man, Erich von Ludendorff, have enjoyed extraordinary success over the Summer. Having designed this final offensive push in hopes of once again surrounding and destroying a Russian army from two directions like they did at Tannenberg, the enemy has instead escaped their clutches, and they can feel the season changing with the first chill nights. Their own lines of supply now stretch farther than ever along the same creaking and inadequate railroads that challenged Russian logistics. Hindenburg and Ludendorff are all too aware of their extended position, and their armies are also being diminished according to the new priorities in Potsdam.

Having brought Bulgaria into the war on their side, the Central Powers want to finally crush Serbia at last, supposing that it will shorten the conflict. Erich von Falkenhayn, rival to Hindenburg and Ludendorff but also Chief of the General Staff, has intelligence of allied preparations to launch new offensives in France, so he has already begun draining off divisions to meet the threat, calling a halt to their operations — which they ignored. Gaining little ground over the next week, Hindenburg nevertheless ends his offensive on the 26th and orders his subordinates to prepare Winter quarters on a new forward line of defense. Vilnius will remain in German hands for the remainder of the war, becoming a major supply center. 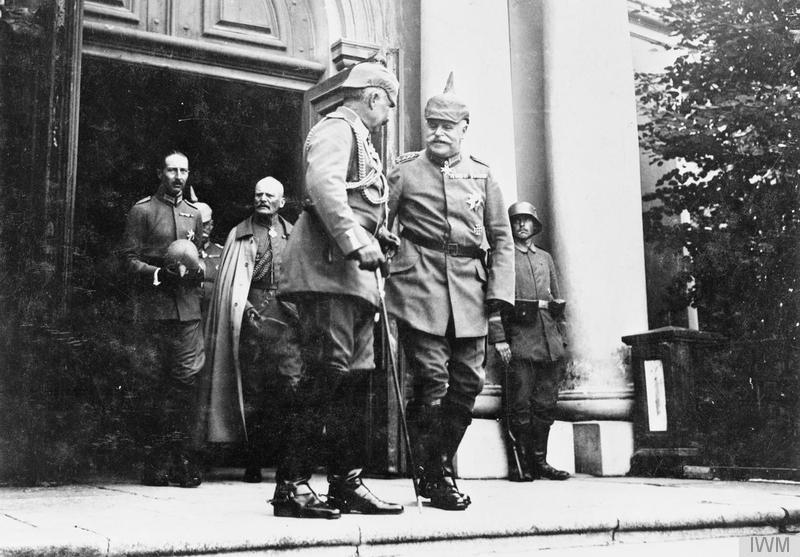 A 1917 photo of the Kaiser meeting Field Marshall Hermann von Eichhorn, commander of the 10th Army, in Vilnius

Vilnius will also be the wellspring of a new movement for an independent Lithuania, for German rule is hardly beneficent. Just like occupied territories in the West, or the hapless people left behind in Poland, Lithuanians who do not leave with the Russian Army are subject to exploitation, and so is their property. Forced labor, expropriated materials, and requisitioned food supplies enhance local resentment of the occupation authority. Initially eager to annex and assimilate his new prize, the Kaiser is instead forced by declining war fortunes to accommodate and then recognize a new Taryba, or council, representing the non-Bolshevik political forces in Lithuania.

It is the beginning of a tumultuous century for the Baltic state. Gaining independence as a result of the war, Poland will occupy Vilnius in the chaos of revolution and counterrevolution. Policy clashes between Warsaw and Berlin over the status of the city will feed the fires of a second, even more destructive conflict, after which Lithuanian independence will once again be snuffed out until 1991. 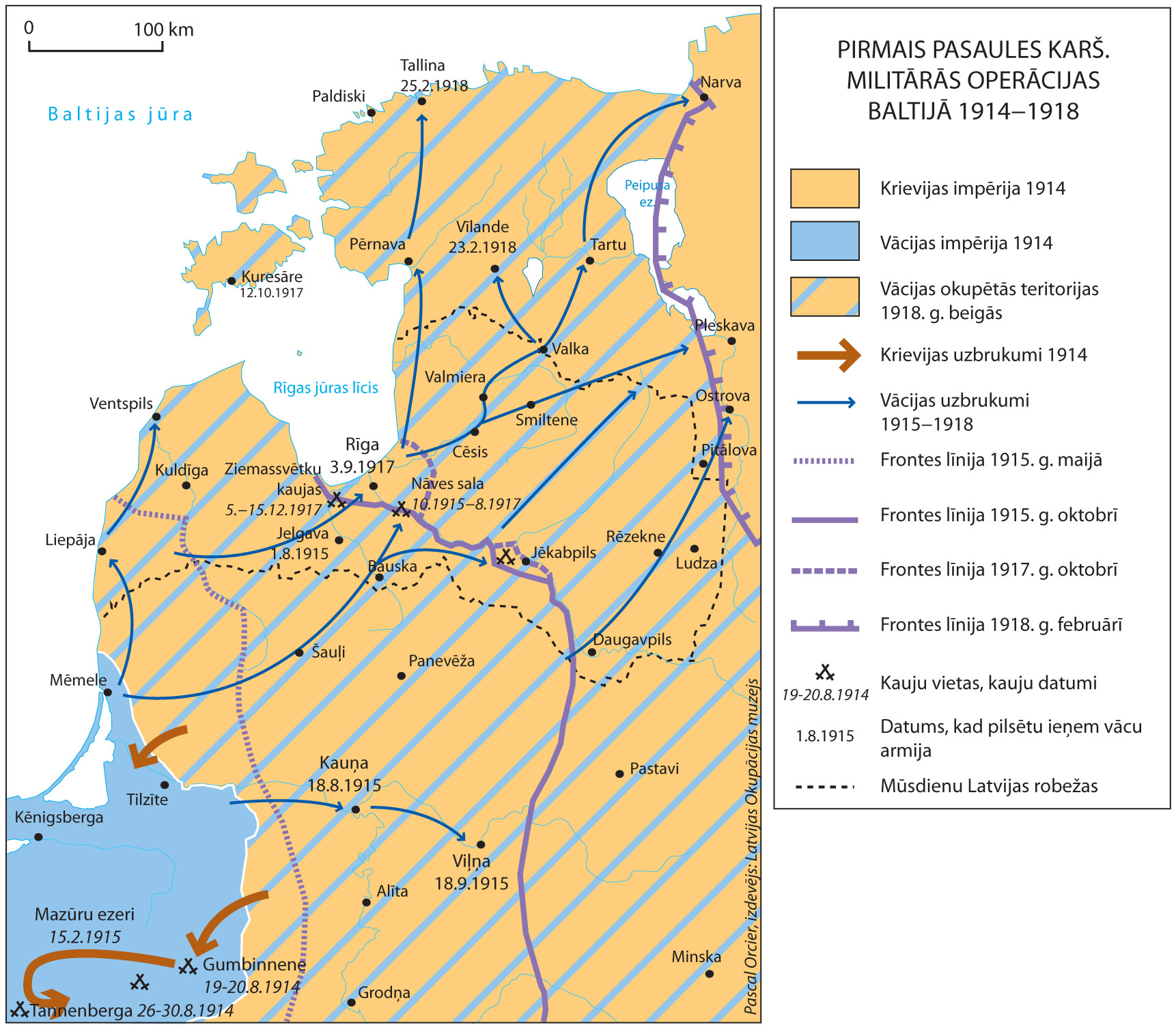 A Latvian map of the changes on the Eastern Front from September 1915 to the end of the conflict. Click to embiggen