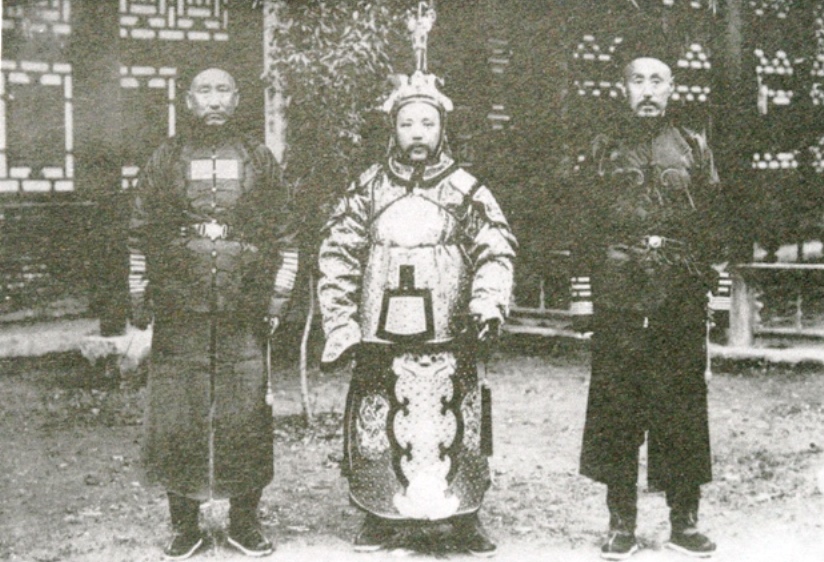 The year 1915 has seen Yuan Shikai,  China’s highest-ranking general, follow his ambition to exceed his already-great powers. As president, he already enjoys virtually unlimited authority over the military, state finances, foreign relations, and civil rights. His rise has ended an era of representative democracy; after dissolving the parliament and replacing it with his own 66-man ‘Council of State,’ which drew up a new constitution in 1914, Yuan began restoring many of the Confucianist traditions and Qing Dynasty religious rituals at the Temple of Heaven which had upheld the imperial system for so many centuries until 1911. He also did away with the regional assemblies, replacing them with military governors responsive to him alone. This disestablishment of native Chinese democracy is setting the stage for decades of turmoil.

After months of private discussions, monarchists in his clique first publicly floated the idea of a restored monarchy in August, drawing an intensely-negative reaction from Japan at the end of October. The Japanese Empire has its own ambitions in China, and Yuan’s diplomatic surrender to Tokyo’s twenty-one demands in May led to sharp criticism of his presidency and a boycott of Japanese goods. Arguing that China needs the stabilizing influence of a strong leader, Yuan has made that brush with war into his primary exhibit for a new imperium, disregarding popular opinion. Holding a political convention in November, Yuan first won a fig-leaf endorsement of the return to monarchy without actually being named to the new throne. Like his cabinet, Yuan’s hand-picked National Assembly is widely seen as a rubber-stamp, and today that body unanimously votes to elect him emperor, surprising exactly no one. 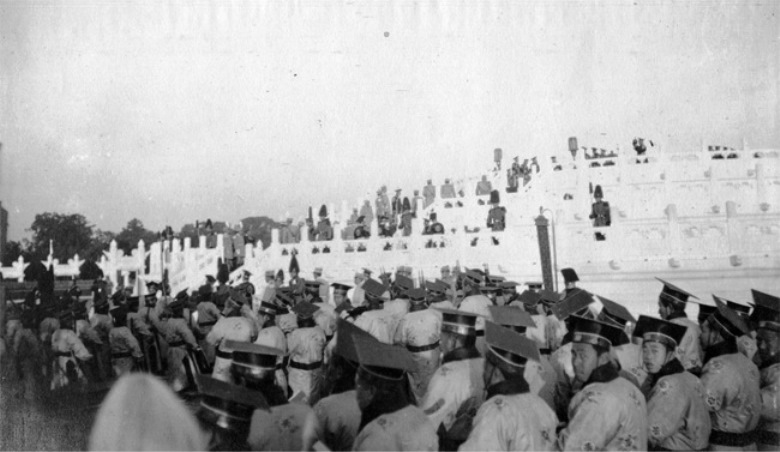 The imperial accession ceremony. This photo was taken by an American named John Zumbrum

Initially, Yuan declines the offer as a pretense of modesty. But then the National Assembly petitions him to accept the title again, so by tomorrow morning he has ‘decided to relent’ and ‘answer the call to serve.’ Taking the title of Hongxian Emperor to found his own dynasty, Yuan puts off the formal accession rites until January 1st, which will be the fifth anniversary of the end of the Qing Dynasty and the erection of the Republic. By the time the big day arrives, however, his decision will have already turned into a debacle. Fitted for his new ¥400,000 ceremonial robes (see photo at top), Yuan Shikai will wear them for just 83 days.

On December 25th, Generals Cai E and Tang Jiyao declare Yunnan Province independent in Kunming, the provincial capital. Deposed by the republican revolution, the Aisin Gioro family discusses marrying one of its princesses to Yuan, prompting one of his three Korean concubines to sabotage a dress rehearsal for the ceremony. Upon taking the crown, he orders the former imperial potters back to work on a ¥1.4 million, 40,000-piece set of porcelain, infuriating an impoverished country with his profligacy. As other regional governors join the rebellion in the new year, forming the National Protection Army (NPA), the new Hongxian Emperor hands out titles of nobility with abandon trying to win new friends and influence key people, but to no avail. 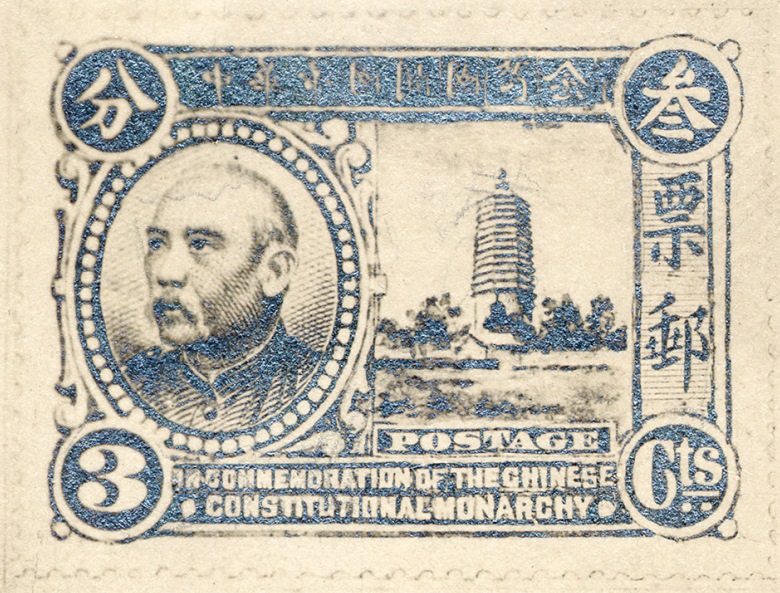 A militant Japanese Empire threatens to invade, but chooses to support Yuan’s enemies instead. Declaring their Chinese neighbors to be “in a state of war,” the Japanese government encourages citizens who live and work in China to aid the rebellion, cutting the nascent monarch off from financial lifelines and forcing him to take out large foreign loans. Despite being better-equipped and trained than their enemies, Yuan’s New Army soon recoils from battles with the NPA in Sichuan Province during a series of demoralizing standoffs and defeats. Yuan had relied on personal loyalty of generals to consolidate his power, but now that Beiyang system begins to unravel, ruining the authority of the central government. His sons begin to fight among themselves in public over the title of ‘Crown Prince.’ The domestic and international support that Yuan had expected never does materialize; instead, open protests and denunciations rock the regional capitals of China, and foreign powers refuse to recognize the new monarchy.

Fifty-six years old, as he finally steps back from his imperial pretensions in March Yuan Shikai suffers from kidney failure, dying in June. The generals of China will thereafter turn on each other, plunging China into darkness. Japan, which has already advanced its interests in China during the Great War by conquering Germany’s Tsingtao colony, will take advantage of the weakness. 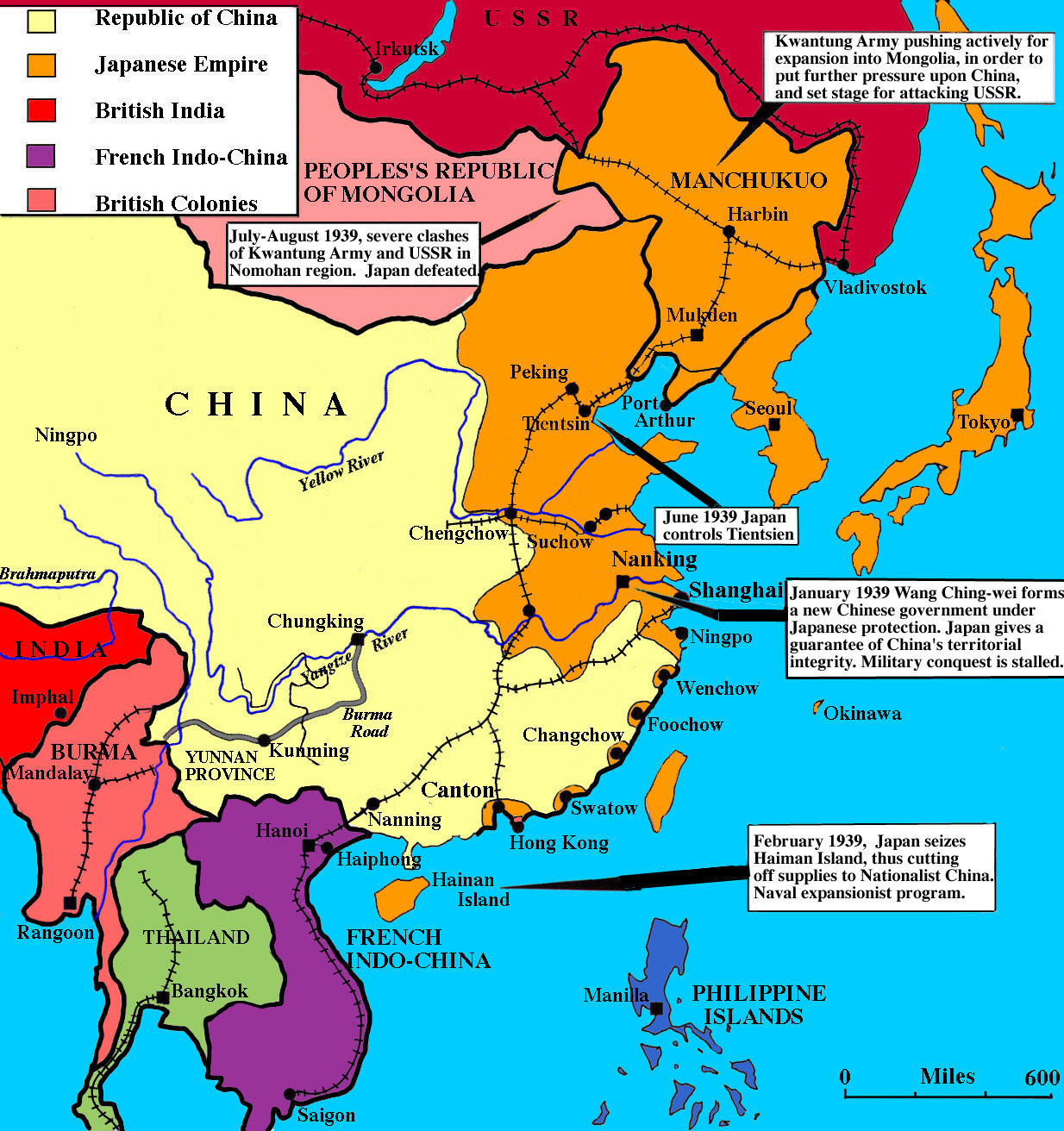 A map of China under Japanese domination at the beginning of World War II. Click to embiggen