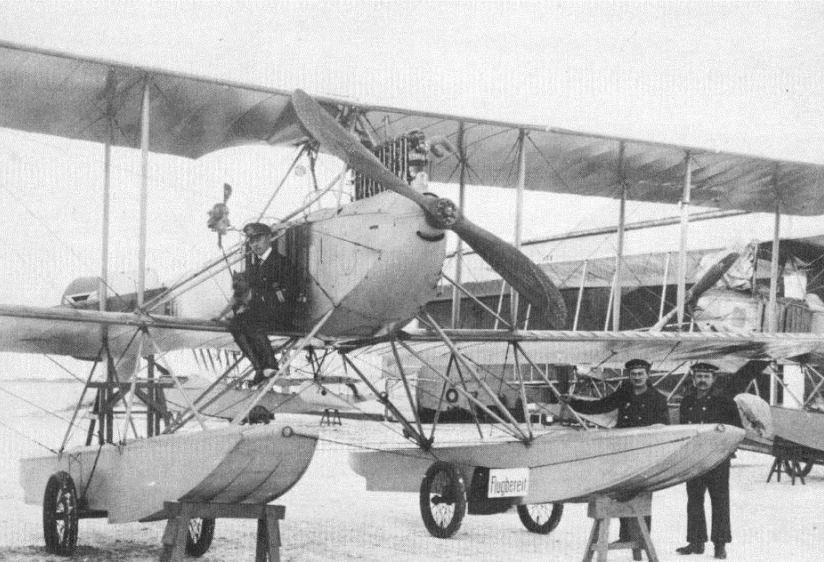 Today, four Friedrichshafen FF33s like the one seen above take off from a ramp at the German base at Zeebrugge in occupied Belgium. Accompanied by a Hansa-Brandenburg NW and the unique Gotha Ursinus WD, the six seaplanes of the 1st Seeflugstation Feldflieger Abteilung (SFA 1) roar out over the English Channel bound for Dover on a bombing raid against British civilians. Their attacks have grown more frequent in the last fifteen months, and more daring, with occasional efforts to sting the odd merchant steamer. Although one seaplane seems to have returned to base before reaching the target zone, it is still the largest fixed-wing air raid on Britain to date.

Civil defense measures and an early warning system are in place, but today they do not work. Spotting two of the incoming marauders flying at 5 or 6,000 feet just after 2 PM, the lookout tries to use his direct phone connection to the Westgate Seaplane Base, but gets no answer and must forward the message through the Coastguard line to Foreness for radio transmission to Westgate. He is able to reach London, however, and so the British capitol knows about the raiders’ flight path towards Ramsgate before its residents do.

Meanwhile, the other three aircraft have already appeared over the Admiralty harbor. The first four bombs fall close to the historic castle, damaging only the lawn. One strikes a troop shelter, killing four men of the 5th Battalion, Royal Fusiliers and wounding eleven. Turning over the town, a plane from SFA 1 drops bombs on Castle Street and Folkestone Road; one destroys a tram track, while the other kills a young woman on a bicycle an a 7 year-old boy on his way to Sunday school. Turning again towards the harbor, the pilot drops ordinance in Northampton street, killing one woman and injuring two. His final charges land at Wellington Dock and the Commercial harbor, doing little damage. 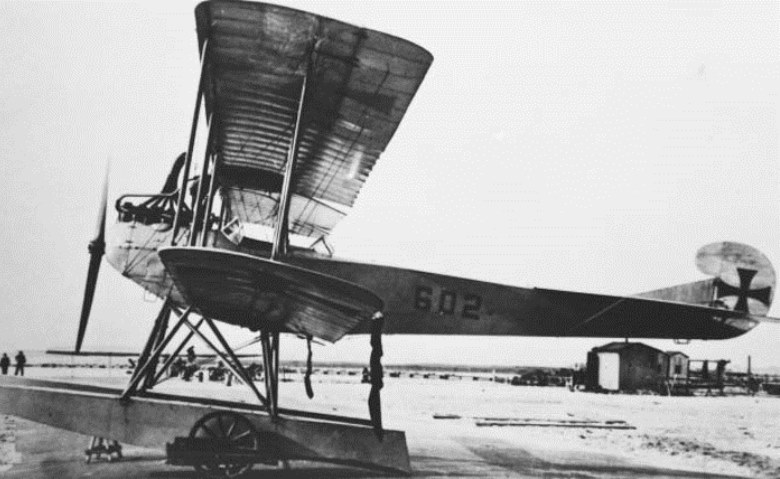 The Hansa-Brandenburg NW. One of a profusion of seaplane types purchased ad hoc by the German Admiralty

A second seaplane hits an orphanage at Eastbrook Place, injuring a nun and damaging the roof but thankfully missing the children as they scramble into the basement. The rest of the bombs from this attacker land in Church Street, King Street, Russell Street, and the corner of Woolcomber and Trevanion, doing some damage but killing no one. Two raiders continue towards Deal, with one of them dropping nine bombs in a north-south line that kill only a chicken in its coop. Moments later, two airplanes converge on Ramsgate from different directions. One bomb strikes a taxi, detonating the gas tank and throwing the dead driver into the air. The blast also kills five children between four and twelve years old who, like the boy on Folkestone road, are on their way to St. Luke’s church for Sunday school. It is one of the most crowded streets in the area; a 23 year-old female pedestrian later dies of injuries sustained from the same bomb.

Miraculously, nine 14-pound high explosive bombs fall all around the gasworks without causing significant damage. One strikes the Chatham House School, which is being used as a hospital for wounded Canadians, but hurts no one. The raiders’s last bomb lands on a house in Margate that is used as a headquarters for a cyclist company, merely damaging the roof and chimneys. Altogether, 14 people have been killed and 26 injured, with damage and loss estimated at £3,809 — in today’s money, about £250,000 or roughly $365,000.

Yet the fight is not over. Stirred like hornets, up to 26 aircraft take to the air from Dover, Eastchurch, Grain, and Westgate in a bid to intercept and destroy the raiders. A Farman FE2b floatplane that was being ferried to France when the air raid began takes off instead. The most successful of them is Flight Commander R.J. Bone of the Royal Naval Air Service, who was flying in a Nieuport 10 float plane of his own and now pursues two of the German seaplanes out to the southeast. During his chase, one of the enemy aircraft — either an FF 33 or the Hansa-Brandenburg — is either struck by fire or experiences a mechanical breakdown, and is forced to land thirty miles past the harbor lightship. Credited with an aerial victory, Bone is almost out of fuel, unable to loiter or strafe the enemy; a second German lands to float alongside its companion until it can be towed back to Zeebrugge. 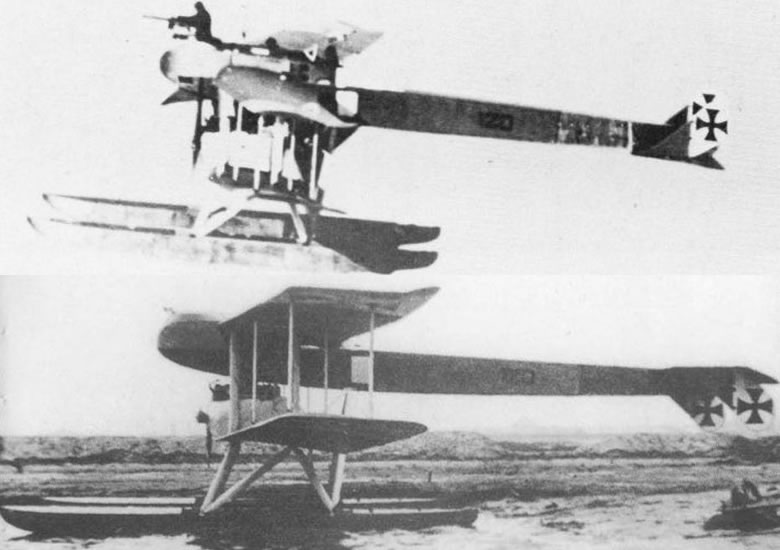 Two views of the only Gotha Ursinus WD ever to fly in combat: at top, taking off for today’s mission; bottom, afloat

As a consequence of public dissatisfaction with the failure of their early warning network, two days later a train of motorized anti-aircraft guns, searchlights, and a platoon to man them arrives in Ramsgate. The scenic West Cliff is closed to the public as they are deployed to protect the city from airplanes coming in off the sea. On March 23rd, St. Luke’s Church holds a funeral for the children who died in the raid, and a large crowd attends, including hundreds of wounded Canadian servicemen.

Yet the most important lesson from today’s events concerns German procurement practices: quite simply, the mission involves three different types of seaplane using incompatible parts. The Kaiser’s Admiralty is not buying these aircraft on a consistent basis, but in small bunches, and of varied design, as needs are identified. It is still early in the history of flight, but this diversity of machines built by separate manufacturers is creating a logistical headache for German supply officers. As a squadron’s assigned aircraft vary, so is a multiplicity of spare parts necessary to keep them all aloft. Motors and propellers and flight controls that are unique to one model cannot be repurposed for a different one built on very different engineering tolerances, and German manufacturers often diverge from the blueprint during a production run, modifying and experimenting so much that the last item in a production series is very different from the first to roll off the assembly line. This is not simply a problem for the Navy, but a profoundly bad habit metastasizing across all service branches — and it will continue to hold back German military success for decades to come. 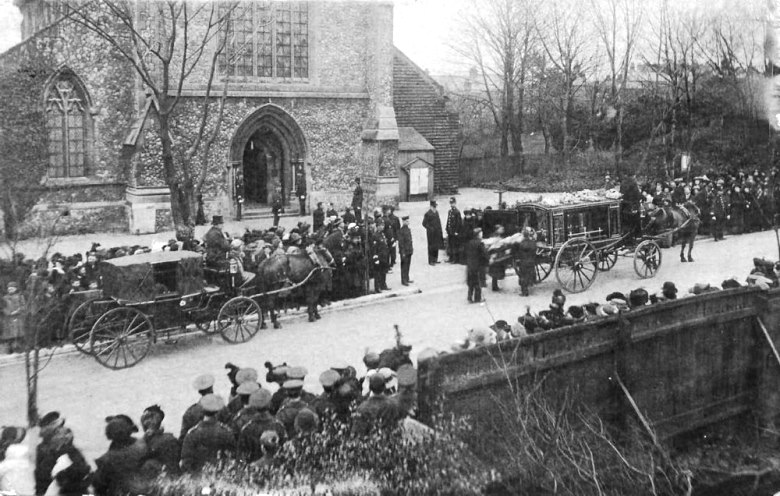 The funeral at St. Luke’s Church in Ramsgate, near the scene of the day’s deadliest blast