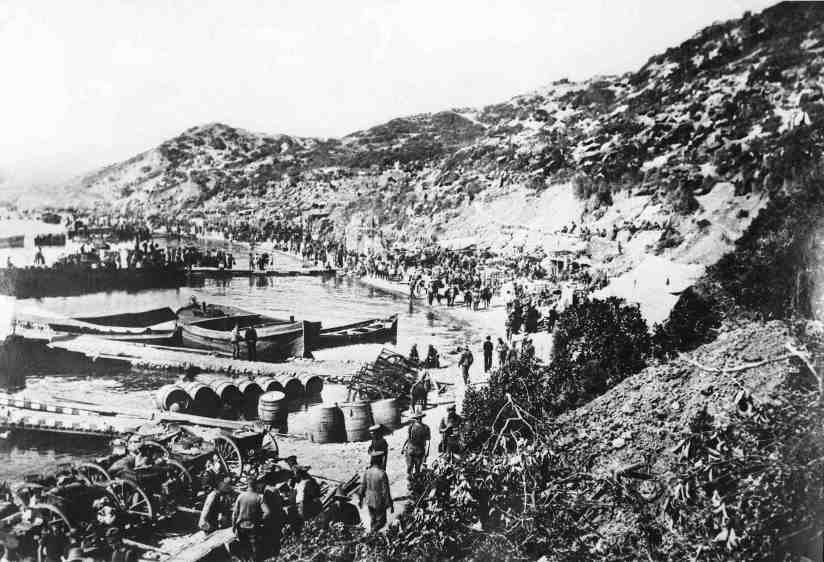 One week after IX Corps began their abortive final attempt to break out of the new beachhead at Suvla Bay, a scratch force begins making their last try at the heights over Anzac Beach in an effort to link the two landing zones into one. The objective is Hill 60, known to locals as Kaiajik Aghala, a low knoll at the northern end of the Sari Bair range. Sir Ian Hamilton, commander of the Gallipoli campaign, has always considered the Sari Bair chain most critical landform to seize if he is to dominate the peninsula. Today is therefore the last example of Hamilton’s failing efforts to win the objectives he had planned to achieve on the first day of landings in April — and the final offensive effort of his tenure in command.

Like every assault at Gallipoli before it, today’s operation begins with its own share of poor coordination and planning. The preparatory artillery bombardment is diverted at the last moment to support another flailing attack by the British IX Corps, alerting the defending Turks without doing anything to soften them up. Designed to advance along a two-mile front, the plan requires two regiments of the New Zealand Mounted Rifles, two battalions of the Australian 4th Infantry Brigade, and three battalions of the 29th Infantry Division to attack over a ridge line, descend through steep draws, cross the Kaiajik Dere Valley, and then attack uphill — all while under fire. Two battalions of Gurkhas from the 10th Indian Division are supposed to advance over open ground to secure their left flank as far as Oglu Tepe again under fire the whole way.

The plan is a mess, and it shows.

A prewar photo of the 10th Gurkhas, one of today’s Indian Army units. Each row is a platoon; about 800 men are in frame

Like always, the attack is uncoordinated. After waiting a half-hour to see if their artillery support will rematerialize, the New Zealanders begin their quarter-mile approach march, and the Turkish skirmish units fall back from the forward line after just fifteen minutes. The Connaught Rangers, one of the 29th Division elements, also reach their first objective quickly. But the Indian units and Australians are lagging behind, and the Connaught men charge uphill in a confused tangle of companies, easy targets for accurate Turkish fire. Riflemen and machine guns sited on the crest cut them down; accurate artillery fire blasts holes in their ranks. The shattered survivors hold their captured trench at the bottom of Hill 60 until relieved by the 5th Gurkhas after 5 PM. The 4th Australians and the 10th Hampshires, another battalion of the 29th Division, make their own crossing of Kaiajik Dere Valley without support, taking a larger share of deaths and injuries for it.

A century later, armchair generals often discuss the battles of Gallipoli as a series of technological what-ifs: would better landing craft have created a decisive advantage? More grenades? More artillery, as on the Western Front? More aircraft? These things might surely have made some difference, to be sure, yet the most important item of modern battle-gear missing from the Gallipoli campaign is a man-packable radio. Equipped with the sort of battery-operated handsets available at any given electronics store in our time, the attacking units a century ago today might very well have managed to better-coordinate their movements, perhaps even altering the outcome of the battle. Theirs is hardly the only example of a disjointed effort in the broken terrain of the peninsula which might have gone better with improved communications, for telephone lines are cut almost as soon as fighting starts, while message runners are quite vulnerable to sniper and artillery fire. In such terrain, it can be extremely difficult for flanking units to maintain contact with one another. 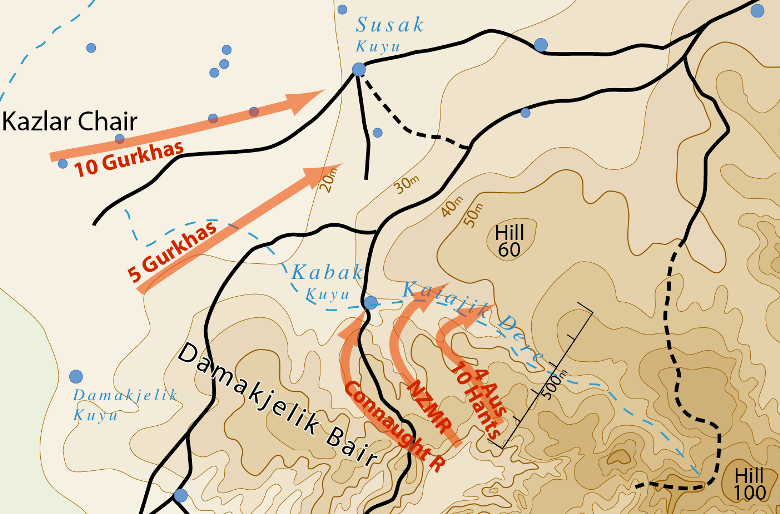 A decent WikiPedia map of the battle for Hill 60 today. Actually, this is probably better than the maps the attacking force used

Another attack at dawn tomorrow by a fresh battalion of the Australian 2nd Division is launched with insufficient artillery preparation. Ordered to fix bayonets, the men of the 18th Battalion suffer more than fifty percent casualties and fail to take the vital hill-crest. On the 27th, three dismounted Australian Light Horse regiments join the struggle for the objective, finally taking the summit after two bitter days. But the Turks cling to the landward side of the hill which overlooks Suvla Bay, and with the 18th Battalion at a third of its previous strength, the fighting force at Hill 60 is just too exhausted to continue.

Underlining the communications problem which is giving allied commanders a false impression of the situation on the ground, General Birdwood receives an incorrect report that the entire hill is in their hands. Patting himself on the back, Hamilton calls it “a big tactical scoop,” but the situation is merely a stalemate like so many others on the Western Front, where the high ground has itself often become no man’s land. With no reserves left to commit, Hamilton’s final victory is as hollow as all of them. The campaign is a failure, and so is he. 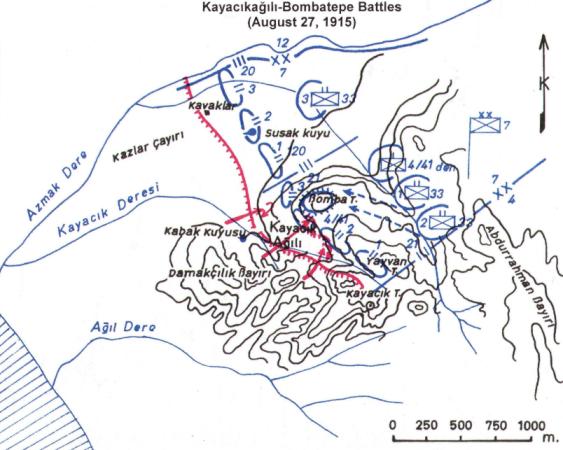