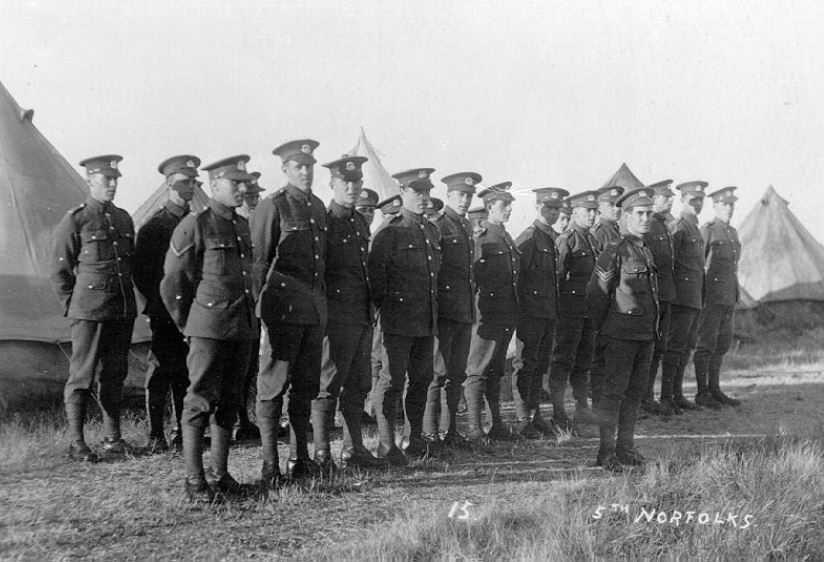 As an exercise, examine the above photo of two squads from the 1/5th Battalion of the Royal Norfolk Regiment, taken in camp this February. Study each man closely as he peeks at the camera, which is still a kind of rare and magical invention in 1915, especially within a camp where cameras are forbidden. But then as you look in each man’s eyes, say goodbye to all and every one of them, for they are about to be butchered like so many Spring lambs. Turkish troops are in no mood to take prisoners today, for the men you see above are an undifferentiated invader, while many a British breakfast ration has been some Turk’s first meal in days after long marching and sustained stress. Displaying continued disdain for his enemy, British commander Sir Ian Hamilton’s latest attempt to secure the heights of the Gallipoli Peninsula is reinforcing all his previous failures at a tremendous cost, for the Turkish infantry soldier is eager to inflict wholesale slaughter by lots.

The lone survivors of today’s mission for the 1/5th Norfolks are a fourteen year-old private who is unable to advance due to exhaustion, a not-uncommon problem in sweltering heat and alarmingly-low water rations, and wounded Private Arthur Webber of the Yarmouth Company, who is saved by the intervention of a German officer. The rest of them go over the top, climb uphill under sustained artillery fire from competent Turkish gunners, lose friends to sniper fire, and finally plunge into a burning wood amid a confusion of contradictory orders. Unsure of the objective, attacking in the broad afternoon daylight with bayonets flashing, issued the wrong maps, the ragged remnant of a battalion of 250 men and 16 officers is last observed advancing into the teeth of the Turkish defenses at a farm near Kavak Tepe Ridge a little after 4:30 PM behind their commander, Sir Horace Proctor-Beauchamp, never to be seen again.

The Norfolks include a very special company E. Raised from the household staff at the Sandringham royal estate, E Company is an example of Lord Kitchener’s ‘New Army,’ an all-volunteer force raised from social cohorts that will come to be known as the ‘Pals battalions.’ King Edward VII personally requested the unit to form in 1908, and its rank structure — local notables being officers, senior servants of the estate being non-commissioned officers, the field and stable hands being private soldiers — reflects the universal arrangement by which the New Army is sorting itself into leaders and followers. Shocked by the sudden loss, King George V takes great personal interest in the fate of E Company and their comrades throughout the war, but to no avail. Only when the fighting is finally over will War Graves Commission search parties find the remains of 1/5 Norfolks, determining they were all bayoneted and/or shot through the skull within a square-mile area.

Dotting the surrounding hills, stark cairns of sun-whitened bones testify to the savagery and brutality that thousands of Englishmen endure together in the chaos of their final moments during these senseless days. 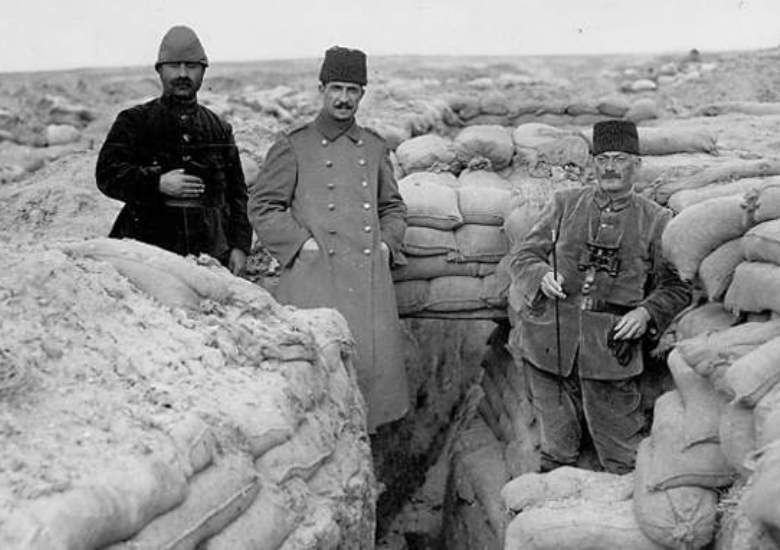 This appears to show German General Otto Liman von Sanders (right) with Turkish officers in trenches that could have graced the Western Front, reflecting parallel development of technologies and tactics

Half a century later, a New Zealand pioneer soldier named Frederick Reichardt claims to have seen “six or eight” loaf-shaped clouds hovering over the scene, with one of them floating low until the 1/5th Battalion marched into its billowing vapor — whereupon it joined its fellow clouds, which floated away into the sky. While this fanciful tale is popular, it is of course nonsense, a fabulist fairy tale concocted over time and through the magic of memory in order to soothe the pain of so much sudden death. Like many Great War hoaxes, Reichardt gets the unit wrong and even gives an incorrect date for the event. Yet his account is credibly published in Spaceview, a New Zealand UFOlogy magazine, in 1965, and given a veneer of secondhand credibility by another campaign veteran the following year. As a result, the Imperial War Museum and the Ministry of Defence will receive countless demands for the release of Top Secret documents confirming a flying saucer cover-up.

It is a strange sort of honor to invent such fantastic fictions, but Reichardt is hardly the only such case. In February, a phantom air raid shut down Ottawa, Canada, an event which will later be transformed into another alien encounter when revisited by the fringe. On the 30th of July, the U28 sank the 5,223-ton steamer Iberian off the southwestern coast of Ireland with shells and torpedoes. Nearly two decades later, the submarine’s captain, Baron Georg-Günther Freiherr von Forstner, will spin a yarn about having spotted a twenty-meter long sea monster struggling in the wreckage of the ship. Picked up by a maritime folktale collector named Bernard Huevelmans, his account also includes an incorrect date and contradicts the testimony of the ship’s 61 passengers and crew in their lifeboats, but achieves widespread fame nonetheless.

Angels, ghostly archers, and chimerical aircraft make it easier to discuss the 36,000 dead being produced by this misbegotten campaign, or the 14,000 whose remains will never be found, or the fact that 13,000 corpses are never identified. Comforting falsehoods make the numerical horror more palatable for people who dare not gaze into the abyss of an ugly, empty, meaningless, monstrous truth.