This post was originally scheduled a month late due to a clerical error on my part.

The Gallipoli campaign is a fiasco, and there is no better sign of failure than the slow uphill progress of the British and French allies along the peninsula from their toehold at the tip. Of the two camps, the French contingent has the harder struggle, for they occupy the southern slopes of the battlefield that are constantly exposed to Turkish fire from the Asiatic shore across the strait. 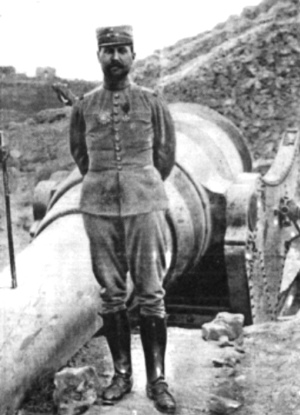 Henri Gouraud next to a captured Turkish shore gun

But the men of France have not shirked their lot, and indeed have displayed tremendous fortitude under terrible conditions. Undoubtedly, one very big reason why today’s attack, which takes seven lines of Turkish trenches and keeps six at the end of the day, is more organized and successful than most British operations so far: General Henri Gouraud (see above), one of the best officers the French Army has ever produced.

Today’s assault begins in the early morning after careful planning, reconnaissance, and preparation. A fortress complete with communications trenches, bunkers, and galleries cut from the rock, the four-sided fortress only falls at a terrible cost in casualties, so Gouraud is at the casualty evacuation center on V Beach below Sedd-el-Bahr supervising the movement of wounded soldiers when an 8-inch high explosive shell fired from the Asian side of the strait explodes close by, hurling him over a seven-foot wall.

Both of Gourad’s legs are broken; his right arm is badly torn by shrapnel, and infection sets in, requiring amputation. Sent home on board the battleship Tchad, overall commander Sir Ian Hamilton reckons the loss of Gouraud as great as that of a whole brigade. Leadership counts, as this change of command will show. Contrary to popular imagination, the Great War is the most dangerous war in history to be a general, and Gouraud’s injuries are also a testament to that reality. 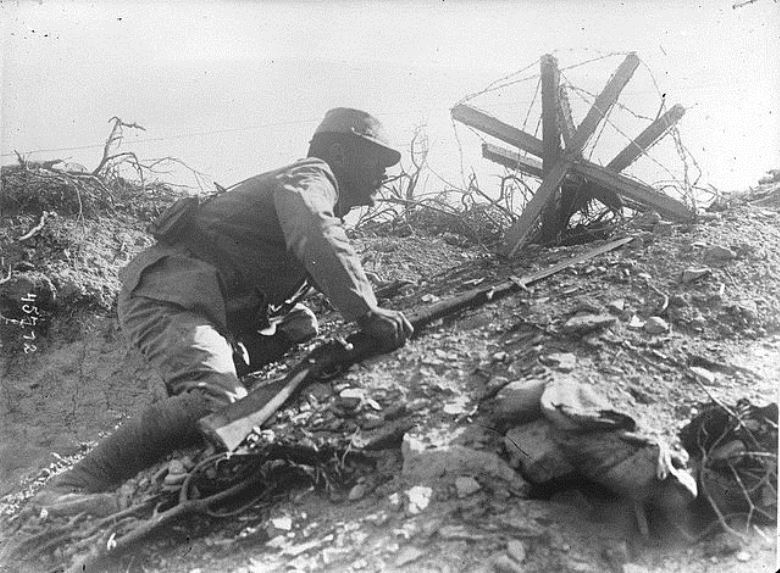 A French soldier keeps watch at the front line during the Gallipoli campaign. Note the barbed wire obstacle

The youngest general when World War I began, Gouraud is 48 years old. His replacement, General Maurice Bailloud, is twenty years older and far less energetic, immediately reducing French efforts overall. Meanwhile, Sir Maurice Hankey, Secretary to the British War Council, is visiting the Gallipoli front. He forwards his impressions of Bailloud on the 5th of August:

Hamilton has described him so accurately that I shall not repeat it. He is the most confirmed pessimist I have ever met since the war began, not only about the situation here but everywhere else. You may judge the value of his views by the fact he is quite convinced that the German submarines will shortly cut the Peninsula off from all communications with the outer world! […] He is a stupid old man and ought to be superseded…

Gouraud will serve in other roles and campaigns with distinction, but he is not done husbanding his beloved corps. Upon arriving in France, he informs the French government that the shelling from Kumkale on the Asian shore puts the French force in jeopardy, as his own wounds again bear witness. After recovering, his meeting with War Minister Kitchener in November prompts the withdrawal of allied forces to Salonika in January — an operation that will require the greatest organization and sacrifice to conduct safely. Even getting out is hard, and even in retreat leadership still counts.