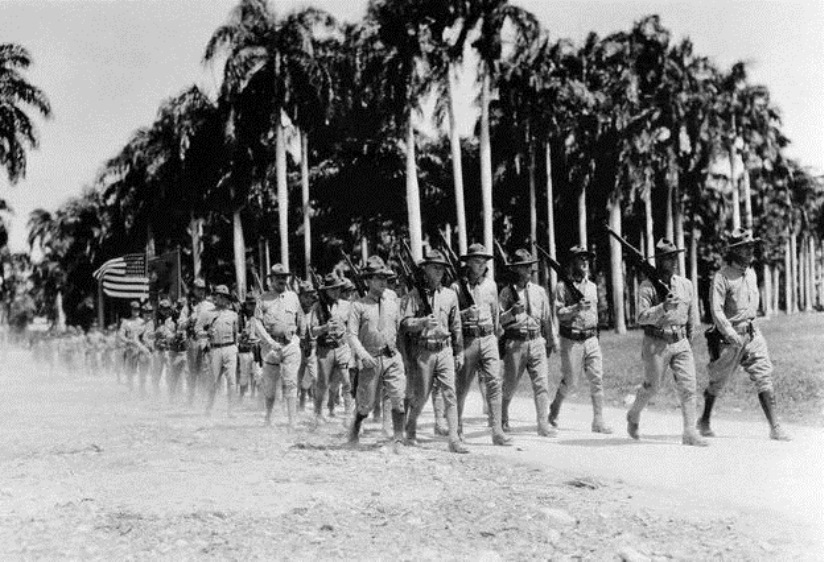 Born in a slave revolt, Haiti has always been fiercely independent, but endemic poverty and delayed social and administrative development have left the Caribbean nation vulnerable to economic exploitation. The country is deeply indebted to American and French banks, and four years of political chaos driven by warlordism has left the country extremely unstable. Yesterday, President Vibrun Guillaume Sam ordered the execution of 167 political prisoners, enraging a mob which pursued him into the French embassy and tore him apart in the streets. American troops have been in Haiti since January of 1914, but today the USS Washington’s Marine detachment, the 12th Expeditionary Marine company, and three companies of seamen — more than 340 men in all — land in Port-au-Prince in response to the death of President Sam. One Haitian soldier is killed when he refuses to surrender his post.

The mission is to restore order and secure American lives and property. That last point is the most controversial, for American corporate interests are undoubtedly being advanced in Haiti. Viewed in isolation from the bloodbath which is taking place all across the strife-torn island nation, the role of capitalist investment in the occupation seems deterministic: on August 12th, an impromptu election held under American supervision makes Sudre Dartigurnave, a friend of American policy, President; within a month, he concludes a treaty with the United States that puts Navy officers in charge of Haitian customs houses, with forty percent of the proceeds earmarked for repayment of national debts. Military officers also supervise public health and civil engineering administration, while Admiral William Banks Caperton, who oversees the landings today, will essentially govern Haiti through martial law. Future president Franklin D. Roosevelt will brag of having personally written the Haitian constitution of 1918, in which the law forbidding foreign citizens from owning property is repealed to the benefit of American corporations such as the United Fruit Company and the Haitian American Sugar Company.

It is the golden era of the banana republic. Underlining what is effectively an American colonization of Haiti, one of the most decorated Marine officers to ever wear the uniform — a veteran of American police actions and humanitarian interventions in Mexico and elsewhere — is on the scene. Becoming an isolationist years afterwards, Lieutenant Colonel Smedley Butler will one day denounce war as a racket, and point to the occupation of Haiti as an example of the ‘disaster capitalism’ he helped to install during the Banana Wars. Yet a myopic focus on these aspects of the story does not reveal the full scope of Wilson’s decision today, for his motives are far more complex than mere American commercial empire. 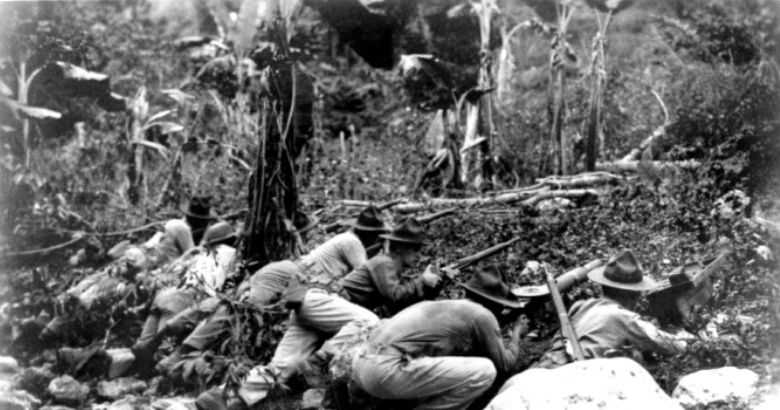 US Marines fighting the cocos, or mercenary gangs. Whereas these are trained marksmen, the cocos were infamously-bad shots

It is now quite forgotten that in 1914, Germany had the largest espionage network in the world, and had been meddling in the affairs of New World states for decades. In that sense, Wilson’s occupation of Haiti is a classic application of the Monroe Doctrine, the longtime foreign policy objective of the United States aimed at keeping European imperialism and Old World aristocratic traditions out of the neighborhood. While the Kaiser’s factories are now largely cut off from their former global trade empire, German communities are still extremely active in Chile, Mexico, and other countries south of the US border. American counterintelligence agents have already foiled one German plot to stoke a Mexican war with the US, for example, and German civilians in South America have supplied far-flung commerce raiders with coal. Though small, the German community in Haiti is one of the most successful foreign cohorts in the country, with some individuals even marrying into the mulatto families which form the backbone of local civil society in order to circumvent the citizenship requirement to own land.

These concerns predate the Great War, and while President Wilson is not eager to embroil his country in the global conflict, his decisions are nevertheless affected by legitimate worries that the German Empire might erect a regional power-base from which to further destabilize the Americas. Wilson wants to nip any such projects in the bud, and it is actually quite hard to blame him. Viewed from a century’s distance, his motivations resonate with the superpower standoff during the Cold War, when nations like Haiti once again host American interventions meant to keep the Russians at bay. 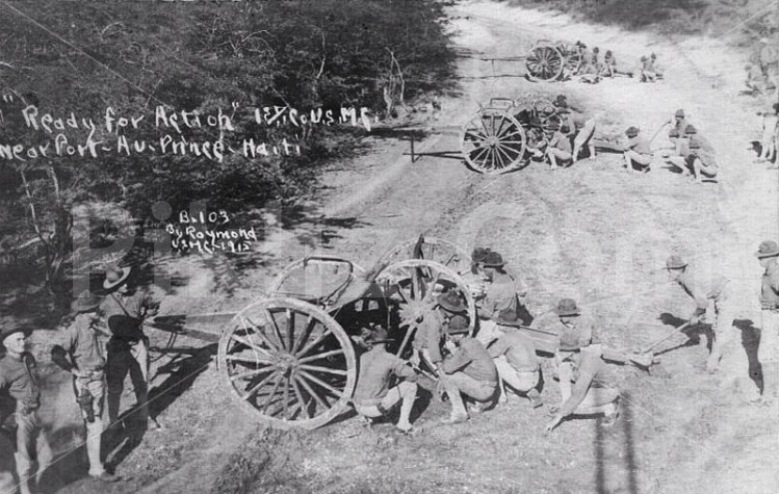 Which is not to suggest that the occupation of Haiti isn’t brutal at times, incompetent at others, or uniformly successful. On the contrary: during the nineteen-year period in which Haiti is practically an American territory, violence and mismanagement are almost routine. Men of their age, most of the white American officers share a deep racial bias, and look down on the folk traditions of Haitian culture as superstitions to be ignored, producing paternalistic policies and forced modernization programs that inspire deep local resentments. Butler later writes that Marines felt themselves “the trustees of a huge estate that belonged to minors. That was the viewpoint I personally took, that the Haitians were our wards and that we were endeavoring to make for them a rich and productive property, to be turned over to them at such a time as our government saw fit.” And with Haitians only in charge of their own courts and schools, bitterness at the usurped functions of government will only grow with time. How are Haitians supposed to learn to manage their affairs themselves when foreigners control all the levers of power, even the police?

Ostensibly humanitarian, the occupation will also kill at least three thousand Haitians and perhaps thousands more. Open rebellion by the cocos, armed bandits who rule the northern highlands, will require Butler to lead Marines into the bush, inaugurating a cycle of bloody struggle and leading to his being named Commander of the Gendarmerie d’Haiti in December. Invoking a fifty-year old Haitian law that allows peasants to be drafted for labor in lieu of taxes, Butler will also oversee construction projects, such as a road from Port-au-Prince to Cap-Haïtien. While he is personally fair and scrupulous in these endeavors, the men who take charge after him are not. Despite the best of intentions, the American occupation will spiral into waste, fraud, and abuse, eventually spurring President Herbert Hoover to begin withdrawing.

But Haiti will still be a mess, and the Americans will be back. 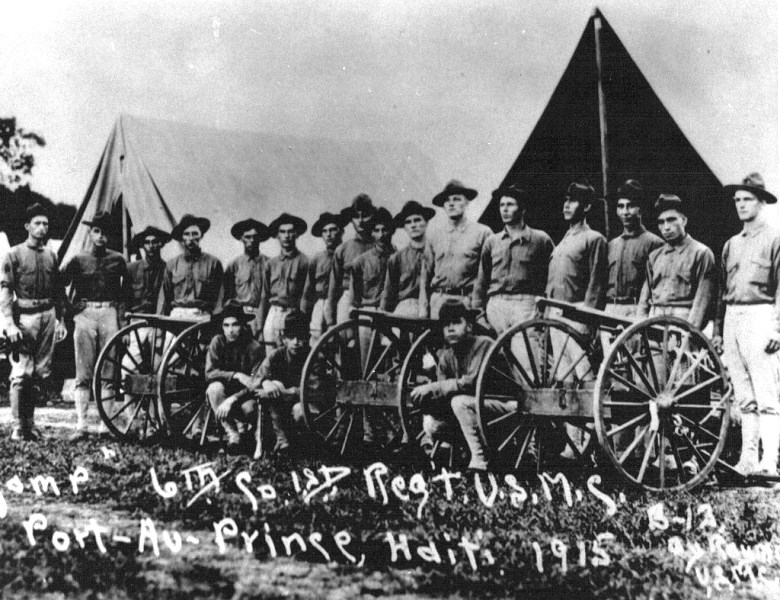 Marines with obsolete wheeled machine guns. The American military was small and poorly-equipped compared to other powers