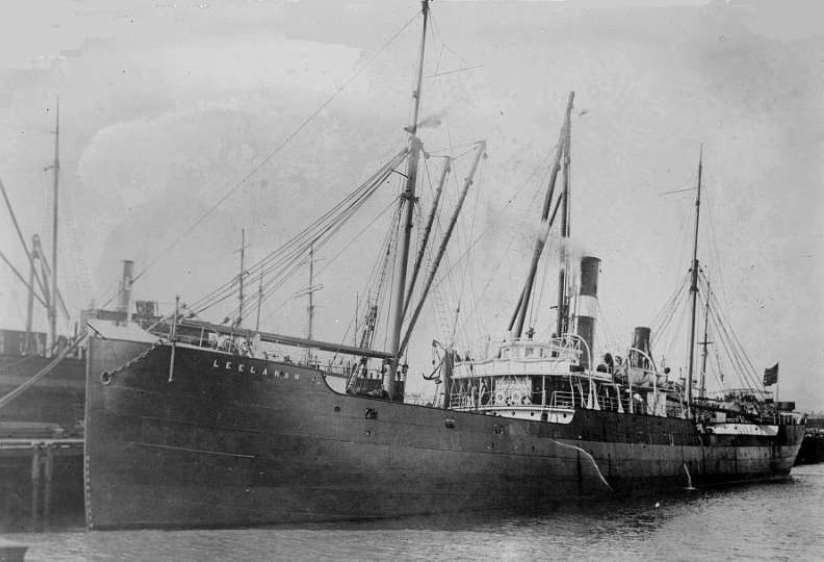 Laid down at Newcastle in 1887 as the SS Earnwell, the 1,924-ton steamer Leelanaw is currently owned by a shipping entrepreneur in San Francisco, and thus flies an American flag. A little after 2 PM today, she is on her way from the Russian White Sea port of Arkhangelsk to Belfast, Ireland with a cargo of flax and hemp fiber when the German submarine U-41 surfaces and orders her to stop for inspection about sixty miles from the Orkney Islands. Her captain first tries to evade the submarine, stopping only when the splashes of its deck gun shells strike the water perilously close to the Leelanaw‘s hull. Coming to a full stop, he takes to a small boat and steps onto the deck of the U-41 with his shipping papers in hand to plead his case. 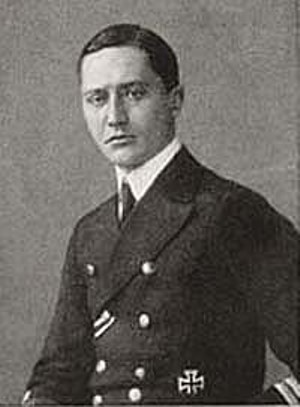 Meeting him there is Kapitänleutnant Claus Hansen. He is leading his third patrol since the U-41 launched in April, and he has already been busy today, for his records show the destruction of four little British trawlers and a tiny coaster on this date — small fry compared to the Leelanaw, and barely enough to whet his appetite for destruction. Taking the captain’s papers, Hansen is already becoming one of Germany’s most successful U-boat captains due to his ambition and aggression, but he is not uncivilized or cruel, as the day’s events bear out.

For the flax on board the Leelanaw is simply contraband according to the published rules of the German blockade, and he has no time to escort the boat to a German port as a prize; when her captain begs leave to put the offending cargo overboard, Hanson asserts a personal, not national or naval, policy of sinking contraband vessels. Yet he allows the crew plenty of time to escape the doomed boat, and upon shelling her to the bottom, Hansen takes an immense risk for humanity by towing the hapless crew towards the Orkney Islands, cutting them loose to submerge only when he spots an unknown ship approaching as they come within sight of land.

It is not the first time that the U-41 has fired on an American ship — Hansen’s crew damaged the 4,409-ton steamer SS Nebraskan with a torpedo in May, though the vessel survived without injury to her crew. Nor are they the first German ship to sink an American vessel; that dubious feat was achieved by the armed passenger liner Prinz Eitel Friedrich in late January. But the U-41 is the first German submarine to actually sink an American-flagged ship, and that makes the event newsworthy. 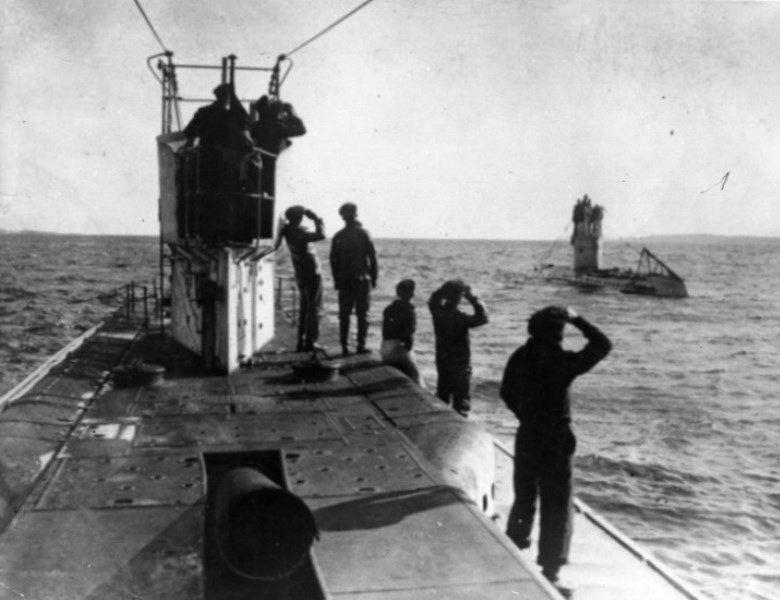 U-35 and U-42, sister ships of the U-41, surfaced in the Mediterranean Sea after transiting the Strait of Gibraltar. Via Getty Images

However, the sinking of Leelanaw does not rise to the level of war, or even bring America a step closer towards the global conflict. Hansen’s respect for the safety of the crew satisfies American humanitarian demands, and his courteous tactics are exactly the kind of changes that President Woodrow Wilson has demanded of German U-boat policy ever since the Lusitania disaster. The most warlike voices in the American press are therefore reduced to leveling the mild complaint that Germany has violated the 1828 Prussian-American Treaty by not allowing the Leelanaw to jettison their cargo and sail on. There are no sanguinary calls for war, no bitter crowds screaming for vengeance. Instead, the entire matter is shuffled off into another flurry of diplomatic correspondence over the details of eventual compensation. One German memorandum to the United States in October reads like a legal arbitration document:

The commander…acted in conformity with the principles of international law. The legality of the measures taken by him is examinable by German prize jurisdiction according to article 1, No. 2, of the German Prize Ordinance; article 51 of the Declaration of London. The ship’s papers have already been sent to the prize court at Hamburg. This court will have to decide the questions whether the destruction of the vessel and cargo was legal, whether the property sunk was liable to confiscation, and to whom and in what amount indemnity is to be awarded, provided any claim therefor is before it. […] It appears from information received from the prize court that the American shipping have already intrusted a Hamburg attorney with a representation of their rights before the prize court. The foreign office begs to reserve a note concerning the outcome of the proceedings of the court.

Three days after the Leelanaw sinks, another U-boat shells the fatefully-named Leyland liner Armenian off the coast of Cornwall when she tries to outrun the submarine, drowning twenty American Negro muleteers still aboard her. This, too, is not enough to bring America into the Great War, or to change the transatlantic conversation.

Such a shift will only come when Germany stops accommodating American demands to hew to the ‘cruiser rules’ for commerce-raiding and warfare, and German submariners will only demand the return of unrestricted U-boat warfare, and the right to fire torpedoes without warning, after a series of losses to British ships using deceptive tactics to attack them while they are surfaced and vulnerable according to the very requirements of the ‘cruiser rules.’ Kapitänleutnant Hansen does not know it, but he is sailing his crew straight towards a fateful meeting with the British Navy in September that will shake the German Admiralty — and eventually put the German Navy back on a collision course with the United States of America.