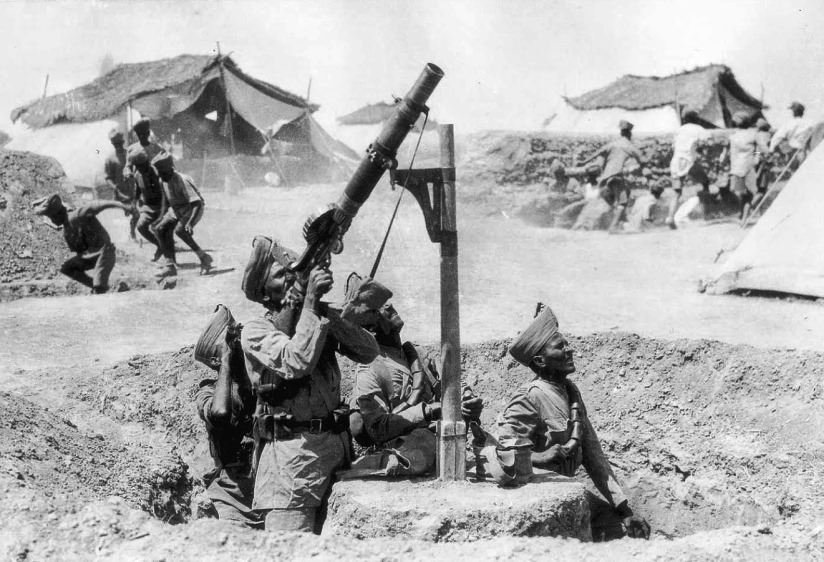 Twelve days ago, Sir Charles Townshend had to retreat from a Turkish force dug in at the site of the ancient city of Ctesiphon when forty percent of his force had become casualties. Unable to sustain that rate of attrition with reinforcements or resupply, he withdrew to the town of Kut al-Amarah, which his command captured in September. Home to six thousand civilians, most of whom are Arab Shi’a Muslims living alongside Christians and Jews in the mud brick homes and dirt streets, Townsend’s refuge is in fact a strategic trap for the exhausted survivors of his 6th (Poona) Division, placing them at the mercy of an enemy who can surround the town while they are dependent on river boats for food, bandages, and everything else. Surrounded on three sides by water, the location only offers an illusion of safety.

Surviving wounded men who limped, crawled, or rode into Kut on springless wagons impressed as ambulances have been leaving as quickly as the scratch fleet, which includes two stern-wheel paddleboat veterans of the 1898 Khartoum Expedition shipped from the Nile to Abadan and reassembled, can manage. Plying the Tigris with them are two side-wheel merchant steamers that have 18-pounder guns fixed to their decks and a few purpose-built river monitors; together, however, the flotilla will prove insufficient to maintain Townshend’s garrison. 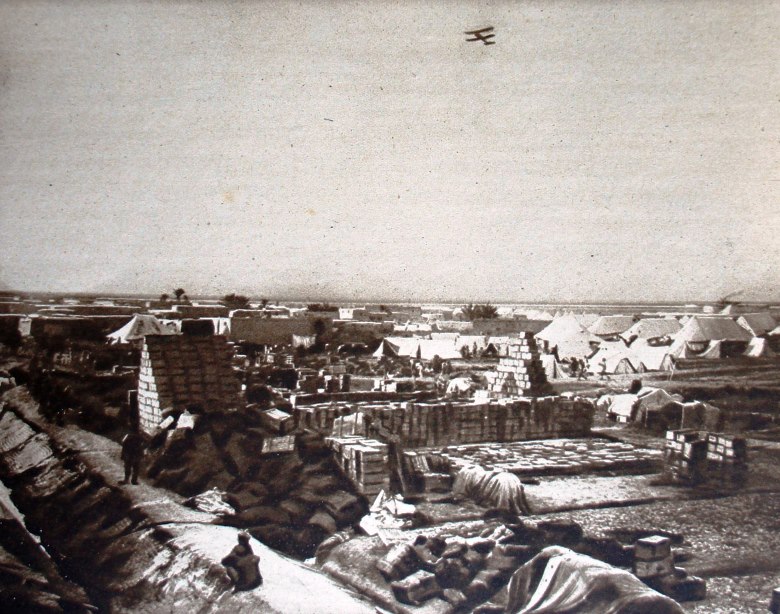 The British base at Kut al-Amarah proves vulnerable to harassing raids by Turkish aircraft. Note the stacked supplies

The Ottomans allowed Townshend to escape at Ctesiphon, but today they invest Kut, and Shammar tribesmen serving as cavalry make the prospect of escape daunting for civilians. For Townshend, this settles the question of whether to expel the inhabitants, so he overrules the advice of his staff on humanitarian grounds, increasing the scale of his responsibility even at the tenuous end of a weak logistical chain. The execution of six perceived Turkish agents serves to pacify the civilians, who settle down for the siege with a dispirited resignation as an artillery firebase occupies the bazaar.

In the wee hours of the next morning, Turkish guns announce the opening of what is to become a 143-day siege with a barrage that indiscriminately falls on the town itself as well as the defenses, devastating homes and families. Commanded by Colonel Nur-ud Din Pasha, the besieging force lacks shell stockpiles for a sustained preparatory bombardment, however, so as dawn breaks he orders Turkish infantry to throw themselves on the mud-walled fort and the front line of defense held by the men of Indian Expeditionary Force D, digging approach trenches into the stone-hard ground with deathless courage. 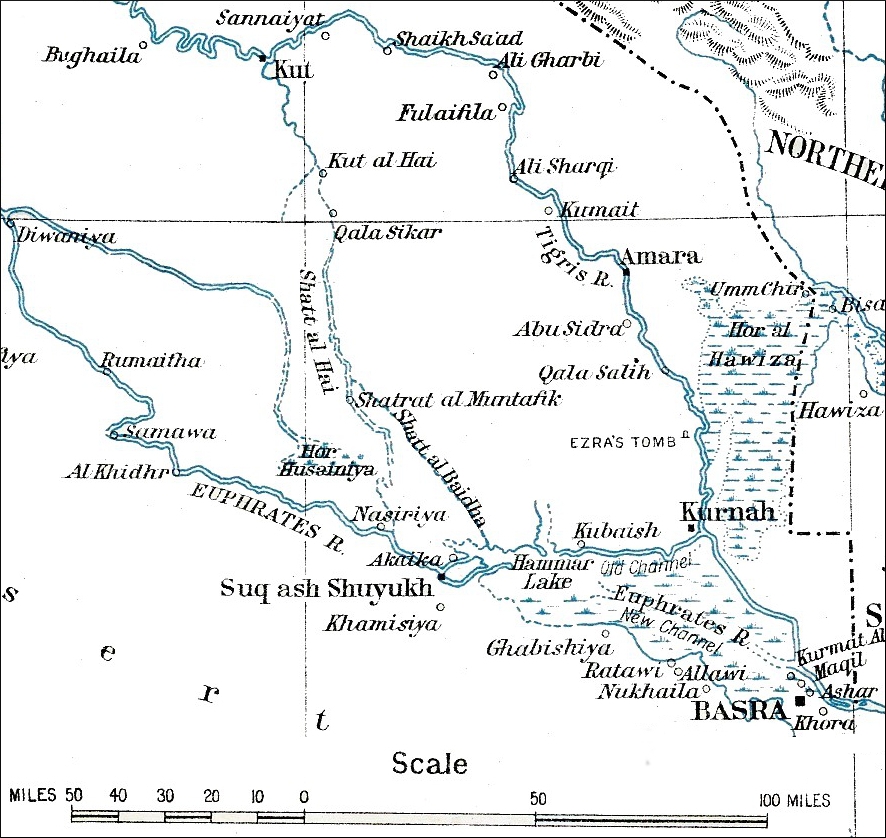 A map of the Mesopotamian theater in 1915. Water was the only transportation infrastructure

To give himself options for counterattacking, Townshend has ordered his engineers to build a pontoon bridge across the Tigris near the fort. After two days of stoic trench fighting, Nur-ud Din concentrates against the 66th Punjabis defending it, threatening to force a river crossing directly into Townshend’s defensive perimeter. Resistance on the east bank remains determined until the white officer commanding the Indian soldiers is killed, whereupon they fall back across the bridge to the fort. The day is saved by the 7th Gurkhas, who advance with a machine gun to stop the Turkish advance and engage in a seven hour, cross-river rifle fight until sunset. The next day, engineers destroy the bridge, leaving town and garrison cut off.

Having begun the year as a sideshow to other theaters of war, Mesopotamia has risen in importance to London commensurately with how matters have gone badly elsewhere, especially the Dardanelles. Townshend’s military superior Sir John Nixon, as well as his superior Charles Hardinge, the Governor-General of India, have pushed him into offensive overreach in hopes of giving the British Empire a badly-needed victory at Baghdad; instead, at their behest one of the greatest blunders in British military history has now begun. 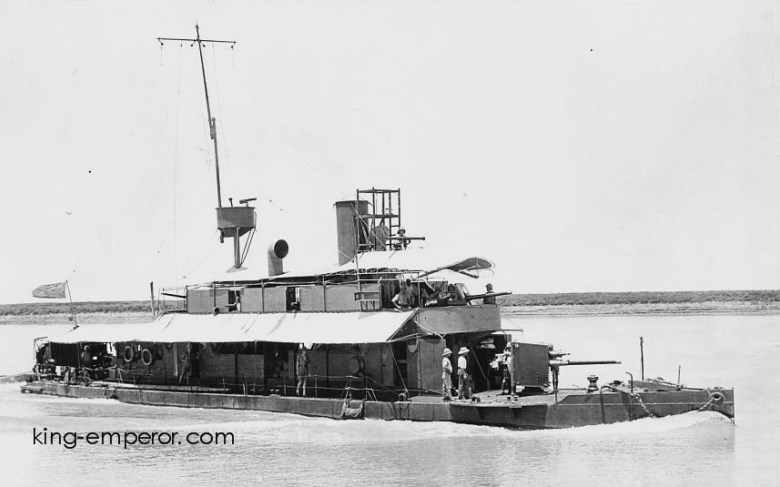 The HMS Greenfly, one of several river monitors built in Britain for the campaign on the Tigris and Euphrates rivers