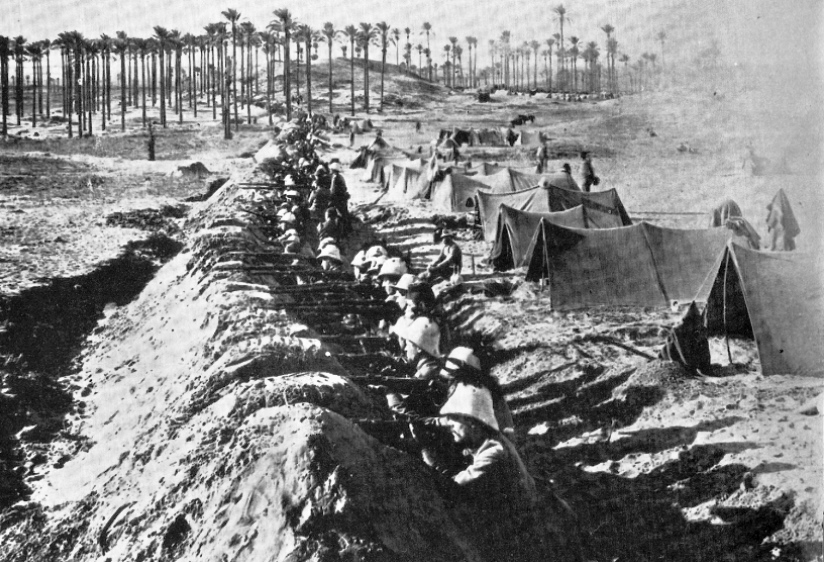 Above: Italian troops entrenched at Tripoli in October 1911.

When Italy became the first power in southwestern Europe to expand their imperial interests at the expense of the decrepit Ottoman Empire, a modern army complete with Alpini special forces and equipped with the latest heavy weaponry quickly overwhelmed the scant Turkish military forces in the territory, but the Teşkilat-ı Mahsusa (Special Organization) never surrendered. Indeed, Turkish support for local insurgency, especially by followers of the Senussi sect, has never really diminished even with the peace between the King Emmanuel and the Sublime Porte, and that proxy relationship has deepened ever since the Ottomans declared war.

Italy, which had pressed the last holdouts into the border region of modern-day Libya and Egypt by 1914, has been forced to withdraw its best weapons and men to Europe, where they are currently being consumed in the fire of war with Austria-Hungary. Indeed, the Italian nation has declared war only on the Hapsburg Empire, not Germany or Turkey. This absurd formality has proven no impediment to either Empire, for German-built submarines have delivered Turkish agents of the Special Organization to the shores of modern-day Libya, where they have evangelized and recruited and armed a fanatic element. Among them are two brothers, one uncle, and two aides to Enver Pasha, Minister of War. 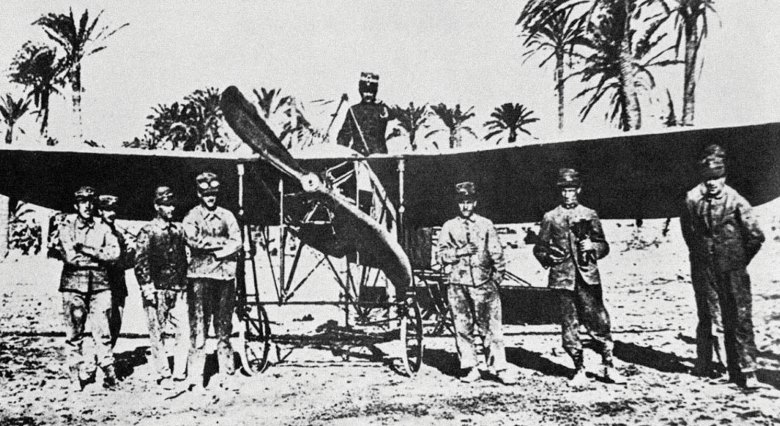 A photo from Italy’s 1911-13 campaign of conquest in Libya, an offensive which featured history’s first close air support sorties

News of this clandestine Turkish operation breaks in the Italian press today, raising outraged calls to expand the nation’s war further. But the truth is that Italy has barely enough military forces to fight the war in Europe; in fact, the best units and the bulk of the best weapons in Libya have been withdrawn to become ‘wastage‘ in the Alpine foothills of Slovenia and against the walls of the mountain-fortress called the Trentino. Inevitably, on April 7th the Italians were defeated at Wadi Marsit; then three weeks later, the Italian Army suffered another defeat in battle near the central coastal town of Sirte. With the killings of Italian colonists spurring an evacuation to Tripoli and Benghazi, the Senussi now control most of Cyrenaica and Fezzan, leaving only the northwestern region known as Tripolitania and the eastern coastal towns in Italian hands. As a result of today’s headlines, Italy does declare war on the Ottomans on August 21st, but the official state of war with Germany will not happen for another year.

Having connived and schemed to win new territories, the Italian state thus finds itself nominal master of lands it cannot defend. Despite receiving the Dodecanese Islands off the western shore of Turkey in their humiliating peace agreement, for example, the Italian Navy is hard-pressed just trying to control the Adriatic Sea, much less the Aegean or the Mediterranean. Negating the presence of French and British naval forces, lack of coordination by national commands leaves all three allied combatants working alone instead of in unison against the common foe. Italy’s token contribution to the British defense of the Sinai — a mere 500-man force, about two companies of infantry — is indicative of Italy’s general shortcomings in production and mobilization. Luckily for the allies, the Turkish campaign of conflict-enlargement is even less coordinated or successful.

Already bearing much of the responsibility for the Armenian genocide, the Special Organization seeks to spread the Kaiser’s jihad across the Middle East and reassert the caliphate’s dominion over the Muslim world. Overall, a very small number of Muslims respond to this message, yet this fact belies the scattershot effect of the Ottoman jihad during 1915: Turkish hands have spread the call for holy war to regions as far away as Peshawar, Oman, Yemen, Italian Eritrea, Kurdistan, and Singapore; often working with Austrian gold, German and Turkish agents are helping drive proxy wars in the European colonial periphery of the Balkans, Morocco, Persia, and elsewhere. None of these smoldering conflicts will come to much, and some of them are already blowing back on their authors, but a few of them will prove distracting to the British Empire and its Indian Army component.

The Senussi uprising is one of those, for it complicates the British Empire’s hold on the Egyptian trade and communications lifeline with its South Asian prize, requiring the assembly of an ad hoc formation to decisively deal with the threat. Italy, which claims their African ‘Fourth Shore’ in deliberate invocation of Rome’s ancient imperial conquests, will lack the strength to reassert their brutal rule until 1920.