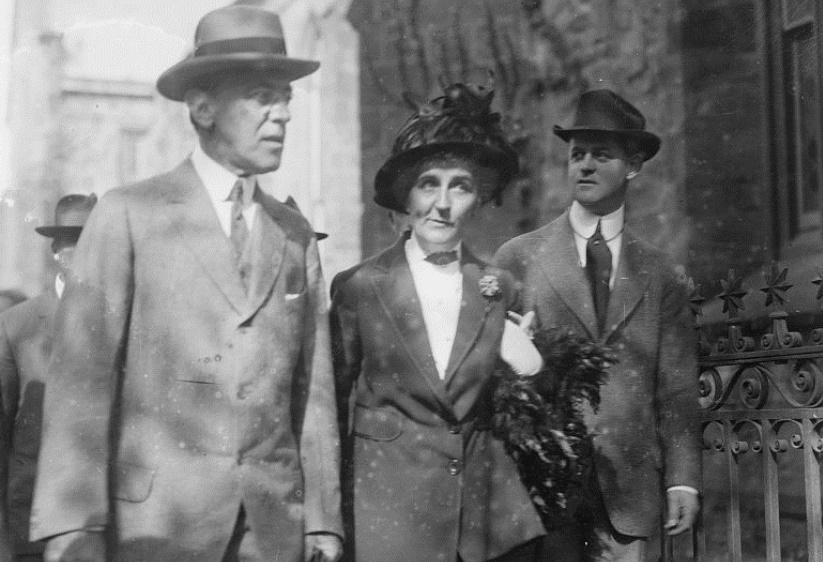 Above: Woodrow Wilson with Edith Bolling in October.

If you were looking for an easy explanation for the way Great War unfolded, this is the wrong July to find it. You were looking for a different July, one in which shell factories don’t make the difference between victory and defeat. You were looking for the war everyone hoped to wage last July, and has been trying to wage ever since: the breakthrough campaign, the strategic stroke, the decisive advantage. Instead, every state at war grapples with the need to provide guns and shells and the full kit of modern war to millions of men so that they might win through weight of fire, and every enlargement of the conflict merely seems to make it worse, not shorter.

This was not how the war was supposed to happen. No one expected that fighting would rage a full year, or that the real bloodletting would only just be getting started. A universal faith in offensive action led every combatant command to plan for, and expect, a short, victorious war; philosophers of every stripe and flag had predicted that industrial-scale slaughter would make long wars impossible, but no such foreshortening has occurred. Rather, all of the powers at war have discovered themselves trapped within an enduring conflict cycle in which material, not moral factors, determine victory. Mobilization is not simply a phase of war, but a constant process of enrollment, training, equipage, and deployment.

It has taken almost this full year of mutual annihilation for the effects of the allied blockade on the Central Powers to start having serious effects on German industry, and neutral powers are still trading with Germany or Austria, complicating the task of enforcing allied sanctions. (Strangely, the economic records of Russia and Germany include $1.5 million in trade over this past year via neutral ports.) Meanwhile, Germany’s U-boat campaign against allied trade has achieved real damage to the British ‘war effort.’ At the diplomatic risk of angering neutral powers, including the United States, Germany had extraordinary success answering the British blockade with the asymmetric technology of submarine torpedoes…until disaster struck.

Today, Woodrow Wilson sends his third diplomatic note to Germany regarding the May 7th sinking of the Lusitania. Asserting America’s rights as a neutral power, he is firm, but not belligerent, in rejecting the novelty of submarines as an excuse for sinking a passenger liner. Wilson also indicates some satisfaction with recent reversals in U-boat tactics.

The events of the past two months have clearly indicated that it is possible and practicable to conduct such submarine operations as have characterized the activity of the Imperial German Navy within the so-called war zone in substantial accord with the accepted practices of regulated warfare.

The whole world has looked with interest and increasing satisfaction at the demonstration of that possibility by German naval commanders.  It is manifestly possible, therefore, to lift the whole practice of submarine attack above the criticism which it has aroused and remove the chief causes of offence.

These tactical changes are already resulting in dead and captured German submariners, however. The British Navy is investing in technological and tactical solutions for the U-boat menace all the time, making His Royal Majesty’s undersea service the second most dangerous one to join, airships being the first. The German submarine fleet is itself a material challenge of production limitations and technological breakthroughs; having begun the war with only a few dozen unterseebooten and having lost many at sea, the German Navy struggles to keep four dozen of the ships out of port at any given time right now.

With time, there will be dozens more available, and the toll in merchant shipping — already heavy — will increase in proportion, too, even with the heavy losses among submariners. In fact, it is not until the Kaiser has more than one hundred of the vessels mobilized that he re-declares unrestricted submarine warfare, triggering America’s entry into the war. In the meantime, Wilhelm’s undersea sailors chafe at the inherent dangers of following a ruleset determined in Washington.

The Government of the United States, while not indifferent to the friendly spirit in which it is made, can not accept the suggestion of the Imperial German Government that certain vessels be designated and agreed upon which shall be free on the seas now illegally proscribed.

The very agreement would, by implication, subject other vessels to illegal attack, and would be a curtailment and therefore an abandonment of the principles for which this government contends, and which in times of calmer counsels every nation would concede as of course.

As Wilson writes these words, the United States still has no merchant marine of its own, depending largely on friendly powers and a ‘free market’ to move the nation’s goods throughout the world. Germany, which once had the world’s second largest merchant marine (a factor often discounted in discussions of their naval arms build-up) has seen its once-great shipping capacity reduced to a few ships plying the Baltic Sea. In 1915, the Kaiser has little to fear from America’s military, for the US Navy lags even other New World powers, and the American Army is tiny compared to European states. Between now and 1917, Wilson and the United States Congress will do relatively little to ameliorate this calculus.

The Government of the United States will continue to contend for that freedom, from whatever quarter violated, without compromise and at any cost.  It invites the practical cooperation of the Imperial German Government at this time, when cooperation may accomplish most and this great common object be most strikingly and effectively achieved.

Wilson’s diplomatic passive-aggression was enough to make William Jennings Bryan resign as Secretary of State, but it hardly heralds a warlike disposition in America’s president. Wilson is far more interested right now in making love, not war, and so the Great War will continue to burn its way through the Middle East, Europe, the Balkans, and Africa without American intervention. Yes, if you are looking for an easy explanation for why America does not go to war yet, but awaits further changes in the nature of the conflict, this one is as good as any: the president has a girlfriend, and he would much rather romance her than mobilize the nation for war. 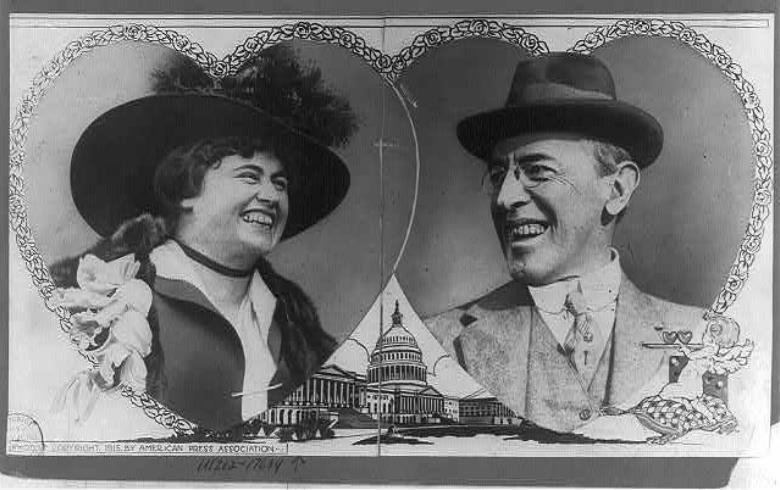 Wilson’s staff kept a tight lid on his infatuation with Edith Bolling, whose racist Southern outlook was already rubbing off on him