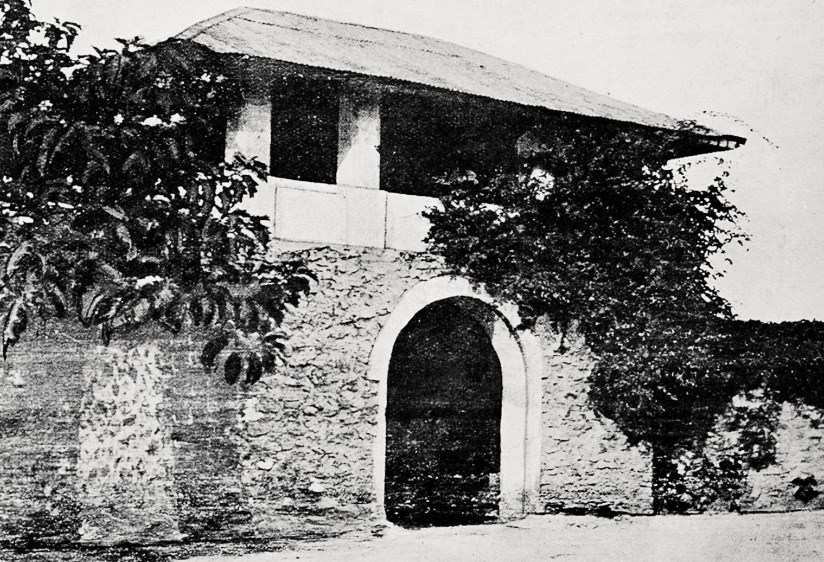 During their four-day raid, the moment of greatest misery and danger for the force returning today from Bukoba (see above) has taken place on board their small steamers. Forced to share the decks with mules that foul the planks with dung, during their return to Kisumu across the width of Lake Victoria the small force encountered swarms of biting insects, while a storm made the men seasick. As a result, wounded men succumb to injury and sickened men are too weak to fight again. The Great War is the first armed conflict in history to see fewer deaths from disease and infection than wounds, for it is also the first to see widespread use of vaccines and insecticides and antiseptics, but the African continent will still see a higher proportion of casualties to disease than the Western or Eastern Front, for the conditions here are quite harsh even on a good day.

The successful operation has only claimed ten dead from the the 25th Battalion, Royal Fusiliers, better known as the Frontiersmen for the preponderance of big game hunters and other white adventurers recruited to its ranks, and its accompaniment: Indian sappers from Faridhkot armed with shovels, men of the 29th Punjabis, a battery of mountain guns, signal and engineering elements, black soldiers of the King’s African Rifles, and a detachment of Maxim guns. The motley assemblage is emblematic of the British campaign in this theater of war, which is the farthest-flung center of resistance remaining to be reduced, and therefore the hardest to supply with men and weapons.

Progress against the colony’s defenders has therefore been slow, with most of the action taking place along its coasts. Like the successful attack on Shirati, the German stronghold on the eastern bank of Lake Victoria, in January, or the recent raid on the shores of Lake Nyassa, or the continuing naval blockade operations against Dar es Salaam, or even the amphibious operation at Tanga in November 1914 which turned into a fiasco, the point of this mission is to cut off the colony’s defenders from the world so that Britain can assemble a force strong enough to finally crush resistance. Slowly but surely, German East Africa is being surrounded, isolated, and outgunned. 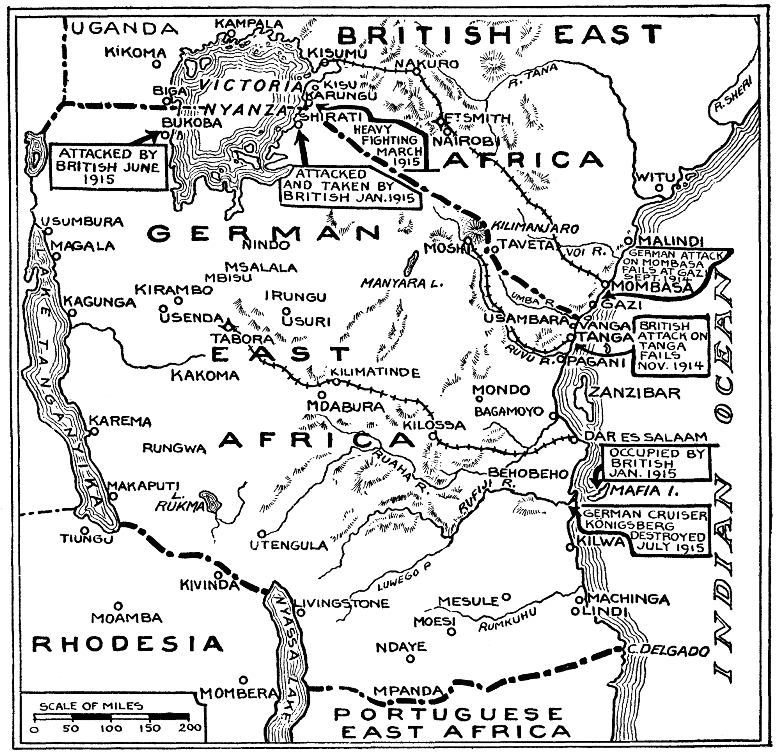 As wide as the Western Front is long, and longer than the Eastern Front, the huge colony borders four bodies of water

Indeed, ‘outgunned’ is the key word for victory in this campaign. Unexpectedly landing north of the town in the morning to catch the Germans off guard, the force was unopposed at its most vulnerable moment. The East African Regiment’s machine guns provided adequate support to the force as they attacked, and while the German defenses included trenches and fighting positions, the mountain guns quickly pummeled them with high explosives. After a sharp two-day fight, a column entered Bukoba in the late afternoon to find the Schutztruppe evacuated to the hills south of the town. In the face of their overwhelming fire and numbers, the German commander saw no other option.

Upon securing their objective, the task force immediately set about its appointed task of destroying the wireless station and the fort. Radio facilities have been primary targets in Britain’s global campaign against the German Empire, especially here in Africa, underlining the fact that the war here is just as ‘modern’ as any other theater. Similarly, railroads will prove as vital to the defense of German East Africa as they have been in the allied conquest of German Southwest Africa. This campaign features fighting in the shadow of Mount Kilimanjaro, so only the low troop density and tenuous logistical conditions prevent these combatants from replicating the conditions of the Western Front in the middle of the African wild.

The British force stopped to take pictures of their destruction in Bukoba, but it was hardly “wanton.” Via Kaiser’s Cross

To be sure, when the task force reembarked two hours after entering the town, they had left a significant amount of destruction behind. The brick pilings of the radio antenna, which was capable of reaching not just every point within the colony but also Berlin, were torn down by the Faridhkot men; the armory was looted of rifles and ammunition, then burned; a magazine was blown up; the commandant’s house and a bazaar were torched. But well after the battle, an English captain named Richard Meinertzhagen will claim that Lieutenant-Colonel Driscoll, commander of the 25th Royal Fusiliers, requested and won the permission of the operation’s overall commander, General Stewart, to pillage Bukoba.

This scenario is not only quite unlikely, given the well-documented and rather short amount of time that the task force actually spent inside the town, but it is also a likely example of Meinertzhagen’s abiding fraud, for rumors about the supposed ‘Sack of Bukoba’ persist despite the deep flaws and narrative weaknesses of the story’s sole source. An Englishman with a German name, Meinertzhagen was relieved of his military post in Kenya in 1906 and even court-martialed for conduct unbecoming of an officer. His claim to personal heroism in attacking snipers during the fight for the town is unsupported by any of his peers. Later in the war, he will take credit for the British victory at Beersheba by claiming to have fooled the Turks with planted disinformation, a claim that does not hold up to historians’ scrutiny. And long after the war, many of the ornithological specimens Meinertzhagen presents as his original discoveries turn out to be stolen from museums, while his fanciful biography is filled with dubious adventures in Europe and Russia that border on the fantastic. His tale of atrocity at Bukoba is therefore suspect at best, at worst a smear reflecting personal jealousy, and represents the appearance of another modern phenomenon: the technology-empowered, mass-media enabled bullshit artist.

Most of the units involved in the operation ending today will be withdrawn or disbanded by 1917. Over time, the small but steady toll in battle casualties and disease weakens them to the point of being ineffective for combat, and the remaining men must be combined into other units. 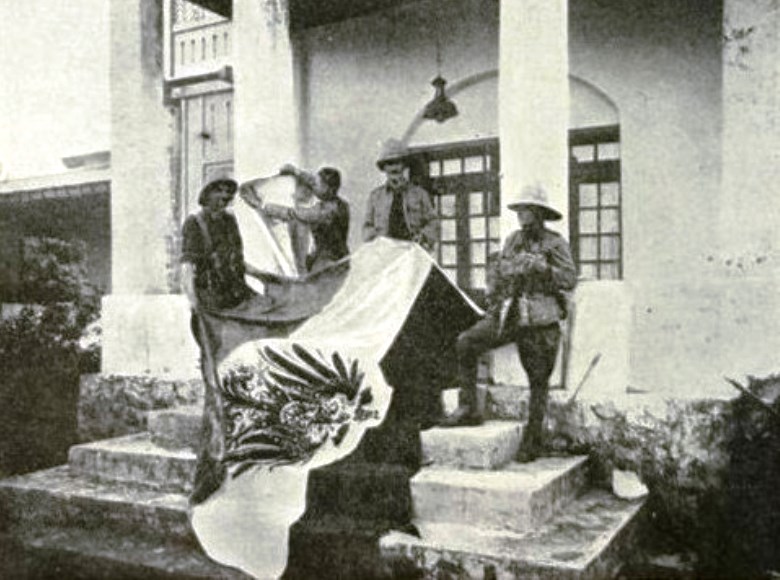 The town hall flag torn down by Australian Frontiersman Wilbur Dartnell, standing right. On September 3rd, he will earn a Victoria Cross by staying behind to die protecting his wounded comrades from enemy African troops known to slaughter prisoners