Today, a telegram arrives at the State Department in Washington, DC from Constantinople, where the American ambassador has been monitoring the systematic Ottoman campaign against their imperial Armenian subjects with increasing alarm. In progress since November, reaching even beyond Ottoman borders, this program of forced relocation and mass-murder will give us the very word ‘genocide’ to discuss the deliberate destruction of a people. Morgenthau’s consuls throughout Asia Minor, Kurdistan, and Armenia have provided timely and accurate intelligence on the matter, but there has been little that he could accomplish — a fact reflected in his cable today.

Deportation of and excesses against peaceful Armenians is increasing and from harrowing reports of eye witnesses it appears that a campaign of race extermination is in progress under a pretext of reprisal against rebellion.

Protests as well as threats are unavailing and probably incite the Ottoman government to more drastic measures as they are determined to disclaim responsibility for their absolute disregard of capitulations and I believe nothing short of actual force which obviously the United States are not in a position to exert would adequately meet the situation. Suggest you inform belligerent nations and mission boards of this.

‘Capitulations’ refers to the centuries-old practice of Ottoman contracts with European powers which granted trading rights and protected religious minorities within the empire. As Morgenthau notes, there is little the United States can do to protect the Armenians directly. He has already tried advancing American aid to them, but Turkish authorities insist on receiving any relief directly, and Morgenthau is sure that any funds put in their hands will only disappear into the maelstrom of constant corruption and wartime emergency. Indeed, he remembers only too well what happened the first time he broached the subject with Turkish Interior Minister Talaat Pasha:

I began to talk about the Armenians at Konia. I had hardly started when Talaat’s attitude became even more belligerent. His eyes lighted up, he brought his jaws together, leaned over toward me, and snapped out:

The implications of this question were hardly diplomatic; it was merely a way of telling me that the matter was none of my business. In a moment Talaat said this in so many words.”The Armenians are not to be trusted,” he said, “besides, what we do with them does not concern the United States.”

I replied that I regarded myself as the friend of the Armenians and was shocked at the way they were being treated. But he shook his head and refused to discuss the matter.

Born to a large Jewish family in Germany, Morgenthau immigrated to the US when he was ten years old, and has fully internalized his adoptive country’s values — including political influence, which he has spent decades developing the old-fashioned way. After meeting Woodrow Wilson in 1911, Morgenthau took an active part in his campaign for the presidency, expecting a cabinet post for the trouble but receiving the ambassadorship to Turkey instead. A man of his time whose convictions are deepening, Wilson’s genteel prejudice led him to believe that a Jew would somehow make the best advocate for America in the Ottoman Empire. But Morgenthau’s humanitarian concern mystifies his interlocutor:

“You are a Jew; these people are Christians. The [Muslims] and the Jews always get on harmoniously.We are treating the Jews here all right. What have you to complain of? Why can’t you let us do with these Christians as we please?”…

“You don’t seem to realize,” I replied, “that I am not here as a Jew but as American ambassador. My country contains something more than 97,000,000 Christians and something less than 3,000,000 Jews. So, at least in my ambassadorial capacity, I am 97 percent Christian. But after all, that is not the point. I do not appeal to you in the name of any race or any religion, but merely as a human being. You have told me many times that you want to make Turkey a part of the modern progressive world. The way you are treating the Armenians will not help you to realize that ambition; it puts you in the class of backward, reactionary peoples.”

“We treat the Americans all right, too,” said Talaat. “I don’t see why you should complain.”

“But Americans are outraged by your persecutions of the Armenians,” I replied. “You must base your principles on humanitarianism, not racial discrimination, or the United States will not regard you as a friend and an equal. And you should understand the great changes that are taking place among Christians all over the world. They are forgetting their differences and all sects are coming together as one. You look down on American missionaries, but don’t forget that it is the best element in America that supports their religious work, as well as their educational institutions. Americans are not mere materialists, always chasing money—they are broadly humanitarian, and interested in the spread of justice and civilization throughout the world. After this war is over you will face a new situation. You say that, if victorious, you can defy the world, but you are wrong. You will have to meet public opinion everywhere, especially in the United States. Our people will never forget these massacres. They will always resent the wholesale destruction of Christians in Turkey. They will look upon it as nothing but wilful murder and will seriously condemn all the men who are responsible for it. You will not be able to protect yourself under your political status and say that you acted as Minister of the Interior and not as Talaat. You are defying all ideas of justice as we understand the term in our country.”

Strangely enough, these remarks did not offend Talaat, but they did not shake his determination. I might as well have been talking to a stone wall. From my abstractions he immediately came down to something definite.

“These people,” he said, “refused to disarm when we told them to. They opposed us at Van and at Zeitoun, and they helped the Russians. There is only one way in which we can defend ourselves against them in the future, and that is just to deport them.”

“Suppose a few Armenians did betray you,” I said. “Is that a reason for destroying a whole race? Is that an excuse for making innocent women and children suffer?”

“Those things are inevitable,” he replied.

This remark to me was not quite so illuminating as one which Talaat made subsequently to a reporter of the Berliner Tageblatt, who asked him the same question. “We have been reproached,” he said, according to this interviewer, “for making no distinction between the innocent Armenians and the guilty; but that was utterly impossible, in view of the fact that those who were innocent to-day might be guilty to-morrow!”

As humans, we all find it easier to identify with someone we know — or think we know — than with masses of people. They are undifferentiated others with whom we have no bond. Nameless, traceless, one and a half million Armenians are turning to mere dust in the wind while America does nothing. Having helped win the war and set the terms of peace, America will still do nothing about the ‘Armenian question.’ When the war in Europe has been over for years, the destruction of Armenians will still be underway, and America will still do nothing.

To our great shame as a nation, America has still never taken any measure to even censor the modern Turkish state. 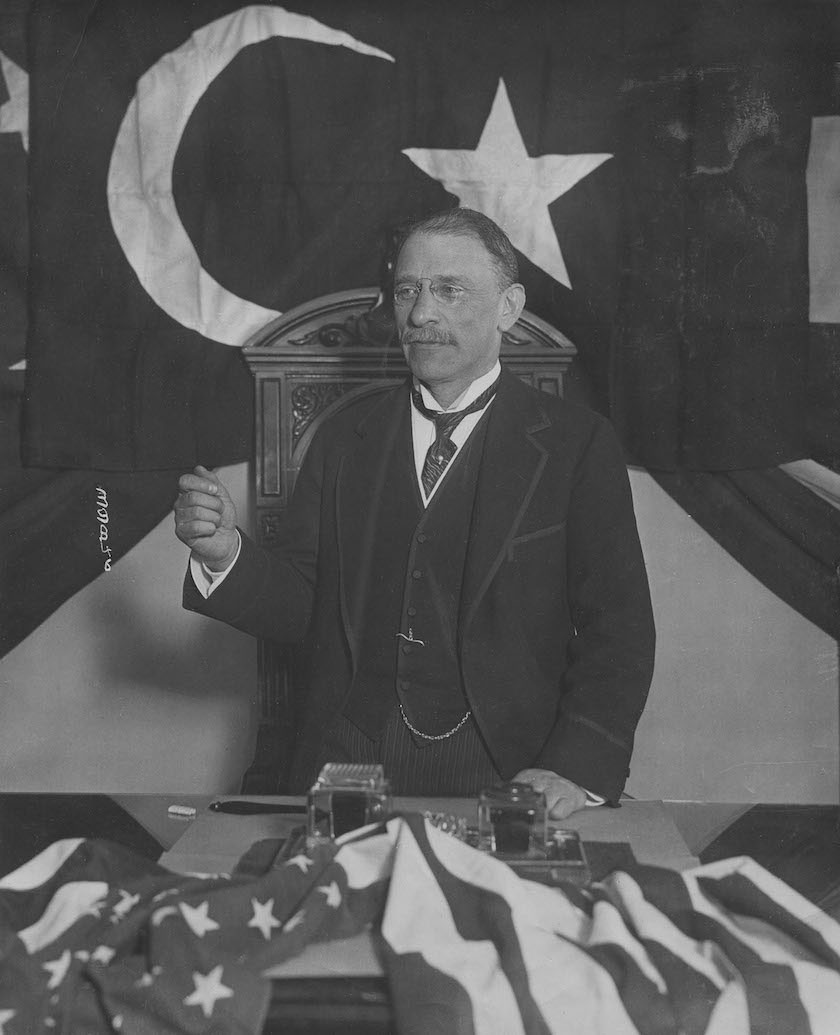 Henry Morgenthau, Sr. speaking to Americans about the situation in Turkey ca. 1918 as part of Wilson’s war effort. Morgenthau’s progeny will have consequential careers: his namesake son will be Secretary of the Treasury during a second war, while his granddaughter Barbara Tuchman will write The Guns of August, the definitive history of the war’s opening weeks