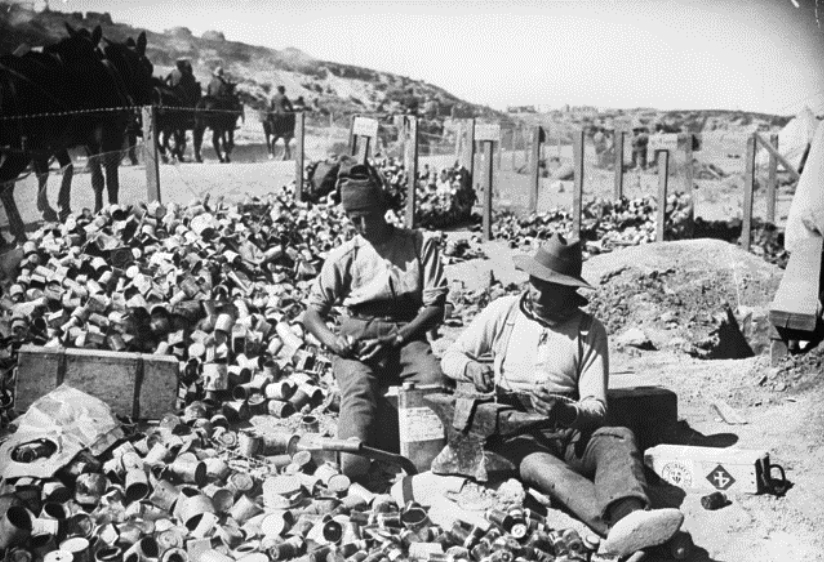 One week after a disastrous uphill push that put one-fifth of his force out of the fight, General Sir Ian Hamilton, the commander of the allied expeditionary force operating on the Gallipoli Peninsula, meets with his subordinate commanders today to develop a new battle plan using fresh troops already en route.

11th June, 1915. Imbros. Sailed over to Anzac with [my Chief of Staff Walter] Braithwaite. Took [ANZAC commander William] Birdwood’s views upon the outline of our plan (which originated between him and Skeen) for entering the New Army against the Turks. To do his share…he wants three new Brigades; with them he engages to go through from bottom to top of Sari Bair. Well, I will give him four; perhaps five! Our whole scheme hinges on these crests of Sari Bair which dominate Anzac and Maidos; the Dardanelles and the Aegean. The destroyers next took us to Cape Helles where I held a pow wow at Army Headquarters, Generals Hunter-Weston and [French component commander Henri] Gouraud being present as well as Birdwood and Braithwaite. Everyone keen and sanguine. Many minor suggestions; warm approval of the broad lines of the scheme. Afterwards I brought Birdie back to Anzac and then returned to Imbros. A good day’s work. Half the battle to find that my Corps Commanders are so keen. They are all sworn to the closest secrecy; have been told that our lives depend upon their discretion. I have shown them my M.F. 300 of the 7th June so as to let them understand they are being trusted with a plan which is too much under the seal to be sent over the cables even to the highest.

Every General I met to-day spoke of the shortage of bombs and grenades. The Anzacs are very much depressed to hear they are to get no more bombs for their six Japanese trench mortars. We told Ordnance some days ago to put this very strongly to the War Office. After all, bombs and grenades are easy things to make if the tails of the manufacturers are well twisted.

Indeed, Braithwaite also sends another telegram to the War Office today urging them to hurry up and send more grenades. The expeditionary force needs about ten thousand of them every week, he says, but is receiving nowhere near that number, impacting both offensive and defensive operations. To make up the shortfall, Australian and New Zealand troops hand-manufacture ‘jam tin’ grenades from cast-off food cans (see above), producing unreliable weapons of highly-varied explosive potential at a far slower rate than a proper factory. Contrary to Hamilton’s understanding, the dearth of hand grenades cannot be resolved by twisting arms, for the Empire faces severe material limits that hold back production. 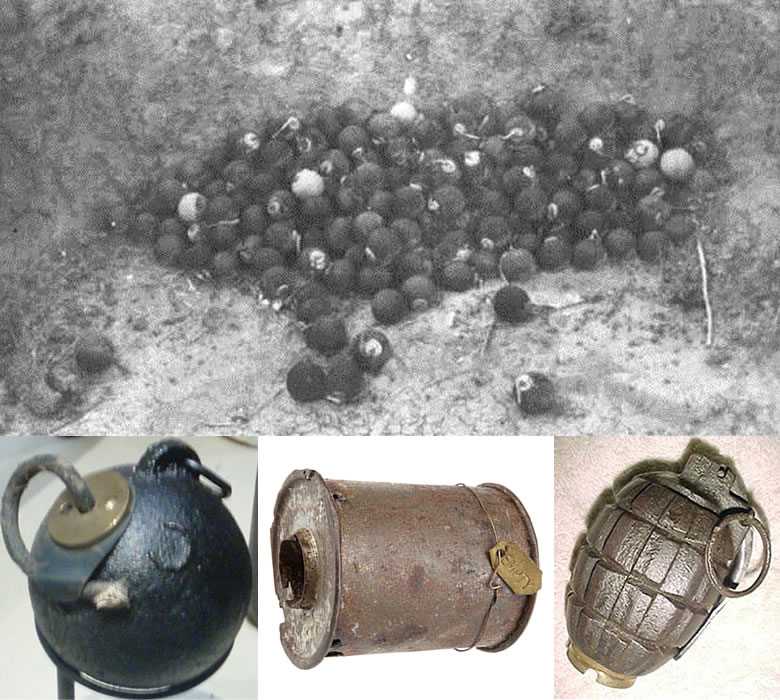 Whereas the British Empire cannot deliver enough hand grenades to its troops at Gallipoli, the Turks have plenty of 73 millimeter ‘cricket ball’ grenades. Every man carrying them is issued an abrasive ignition device — similar to the friction strip on a book of matches — and trained to strike the matchhead on the end of the five-second fuse before throwing each grenade. Originally issued with ten second fuses, the time was cut in half after allied troops threw a few too many of these weapons back at the Turks who had sent them. But even this field-expedient solution of cutting down fuses is much easier and less time-consuming than the allies’ improvised solution, which produces grenades that do not roll into trenches and fighting positions quite as well as a round bomb does.

What a disadvantage we were under with our bombs, as compared to the Turks. Ours were made of tins, with a small bag of ammonal as the charge in the centre of it –packed all round with .303 cartridges with the bullet stripped off flush with the brass – the bullets themselves inverted and packed in between the cartridges – the Turkish shrapnel, razor blades, or anything at all put in to make up – the lid of the fuse projecting through it. It was a very clumsy thing and very hard to throw accurately, or any distance, but very effective. The Turks had a manufactured bomb, just the size of a cricket ball – a beautiful thing to throw accurately and lit by pulling off a brass cap, with a flint and steel ignition for the fuse. Ours had to be lit by a match. We had fatigue parties collecting shrapnel from the ground where it had lain after being thrown from Turkish shells – what a state of affairs, having to collect our enemy’s lead to make bombs for ourselves. Up to August, I didn’t see a manufactured bomb at Anzac.

Yet it is to the credit of the men put in these circumstances that they make do with what they have. If only Hamilton could present half the improvisational skills of the ANZACs, the Gallipoli Campaign might yet be salvaged. But on June 13th, Hamilton shares his ‘new’ plans with the War Office, and they are not a radical departure from anything he has already tried and failed to do.

From the outset I have fully realized that the question of cutting off forces defending the Peninsula lay at the heart of my problem. […] I still consider, as indicated therein, that the best and most practicable method of stopping enemy’s communications is to push forward to the south-east from Australian and New Zealand Army Corps.

The attempt to stop Bulair communications further North than the Australian and New Zealand Army Corps position would give the Turks too much room to pass our guns. An advance of little more than two miles in a south-eastern direction would enable us to command the land communications between Bulair and Kilid Bahr. This, in turn, would render Ak Bashi Liman useless to the enemy as a port of disembarkation for either Chanak or Constantinople. It would enable us, moreover, to co-operate effectively with the Navy in stopping communication with the Asiatic shore, since Kilia Liman and Maidos would be under fire from our land guns.

It was these considerations which decided me originally to land at Australian and New Zealand Army Corps position, and in spite of the difficulties of advancing thence, I see no reason to expect that a new point of departure would make the task any easier. I have recently been obliged by circumstances to concentrate my main efforts on pushing forward towards Achi Baba so as to clear my main port of disembarkation of shell fire. I only await the promised reinforcements, however, to enable me to take the next step in the prosecution of my main plan from the Australian and New Zealand Army Corps.

I cannot extend the present Australian position until they arrive.

Ending today at his headquarters on the island of Imbros instead of the actual battlefield, Hamilton is merely reinforcing his failures and throwing fresh meat into the grinder. Lieutenant General Hunter-Weston, commander of the 29th Division, has experienced a steep learning-curve and will receive intense criticism for his lack of imagination, but he is at least present for the disasters that he perpetrates. On his way to becoming a national hero, General Henri Gouraud will be severely wounded leading France’s expeditionary force in person. Even Birdwood and Braithwaite will survive and thrive after the Gallipoli Campaign. But having failed to ever reach the top of Achi Baba, the mountain stronghold which overlooks his beachheads, Hamilton will be recalled to London in disgrace.

By then, Britain will have solved their grenade procurement problems, but it is also too late for the quarter million allied casualties being incurred by this fiasco, much less Hamilton’s career. 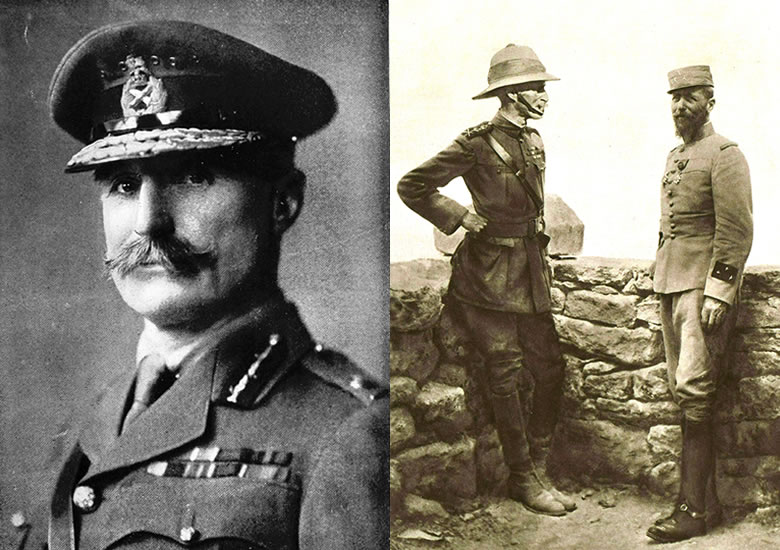