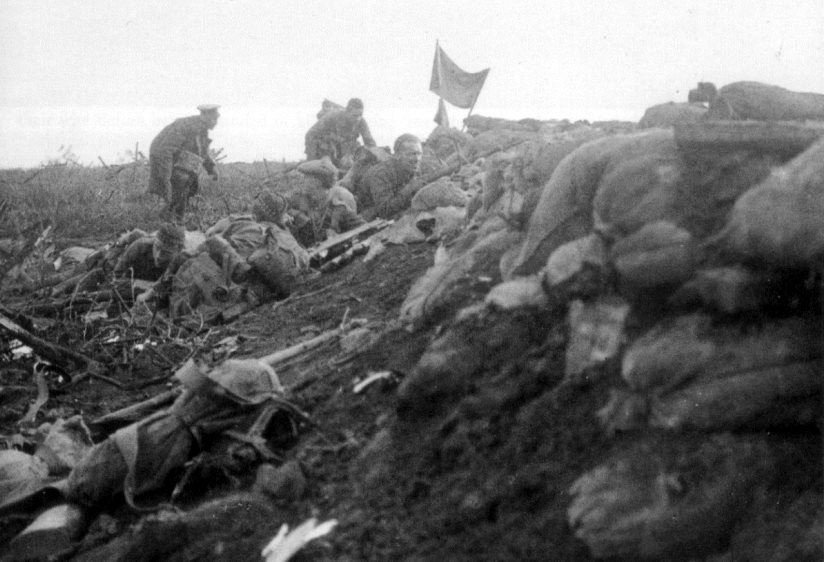 Battle is chaos. Military leadership mainly consists of managing people and weapons within a state of chaos. Oxymorons like “fragmentary order” and “military intelligence” contain the difficult, unstable, uncertain nature of what warriors do in a battle; murder is the clarifying act, but modern militaries are creatures of extreme complexity. Take the above photograph, which shows men of the Liverpool Scottish, a Territorial (Reserve) Army unit, during an attack on Bellewaarde Farm today. It was taken near Objective Y13, a position marked in the map below, by a wounded soldier with a forbidden camera.

The banner those men are holding is a signal to British artillery spotters that they have secured the objective behind another attacking unit that, in turn, is prepared to take its next objective. The guns will now shift their barrage to another objective, hopefully avoiding ‘friendly fire’ casualties during the assault of the position that they have just bombarded. Known as ‘leapfrogging,’ it is the emerging British tactical order of movement on the Western Front.

When the Second Battle of Ypres ended, the British-held salient was greatly reduced, and there were a few dents left in it. One of these lies in the angle of two roads, where a bulge in the German line is centered on a now-destroyed farm and a small lake. Beyond the German lines, Bellewaard Ridge provides overwatch of British positions in the salient, leaving any men in the open vulnerable to artillery fire during daylight hours. Sir John French is restricting offensive operations to conserve lives and store up a reserve of shells, but deems the reduction of the Bellewaarde Salient worthwhile, and moreover he must support his French allies by pinning down German reserves if he can.

To this end, troops have buried redundant telephone lines, laid up forward stores of ammunition, and built support trenches for the last ten days. Shortly before 3 AM, an intense eighty-minute bombardment with three deceptive pauses precedes the 9th Brigade going over the top in the predawn darkness, followed by the 7th. British artillery fire is very accurate today, reflecting improved training and weapons, but there are still not enough heavy guns in the British Army, and too many of them are engaged in battles elsewhere down the line. The 4th Royal Fusiliers attack from Y16 to Y17; the 1st Royal Scots Fusiliers and 1st Northumberland Fusiliers attack between Y15 and Y16, pressing on towards Y17. 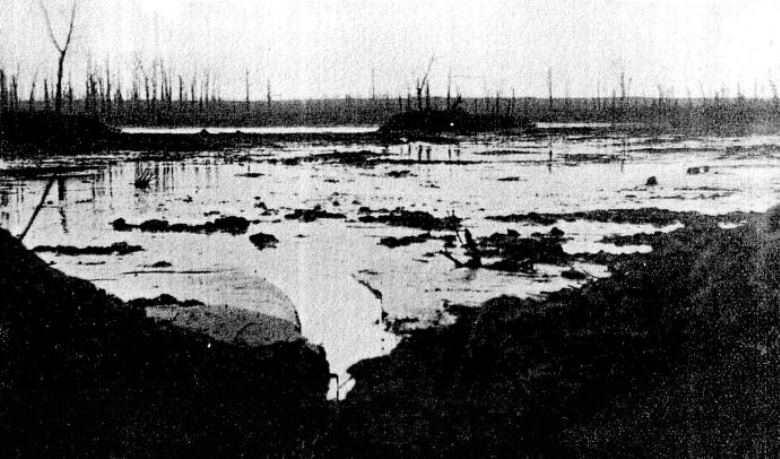 Bellewaarde Lake was really a pond at the bottom of the shallow valley below Bellewaarde Ridge. Note the stripped vegetation

But as the methodical battle-plan unfolds into the late morning, German counterfire is already incurring casualties in the advance, and a lack of experience in new units is showing. By noon, the ‘Y Wood’ between Y16 and Y17 is a jammed mess of men taking cover from the shellfire, with not enough room for all, so the troops dig more trenches rather than retreat. By mid-afternoon, German chlorine gas shells are falling on their positions along with shrapnel and high explosives. In his book Sanctuary Wood and Hooge, historian Nigel Cave records the testimony of a Private Clapham as he braved the dangers of the battle to take a look around and noted the effects of chlorine on the vegetation around him.

Since the morning most of the branches of the trees in the wood had gone, and many of the trunks had become mere splintered poles. Something else had changed also, and for a time I could not make out what it was. Then it suddenly flashed across my mind that the thick hedge at the back of the trench had entirely disappeared. It was right in the path of the storm of gas shells and they had carried it away.

As they are equipped with rudimentary defensive measures, the gas does not kill very many British soldiers, but does add to the confusion and claustrophobia and general horror. At 5 PM, the 42nd Brigade retires on Ypres rather than moving up in turn, for the roads and support trenches are too congested by the traffic of four thousand casualties being transported to the rear as anxious reservists line the ways, awaiting orders to advance. The German bombardment intensifies with the approaching evening, peaking at ninety shells per minute by 8 PM.

The day does end with some progress, for the first and second objectives are taken, while German counterattacks are all beaten back. The 7th Brigade war diary records a gain of 250 yards along an 800-yard front, an area of about 41 acres, at a cost of 25% casualties — the same as other units which attack today — while killing less than one thousand Germans, who defend their front lines only sparingly. An acute shortage of grenades is greatly compounding the shortage of shells by limiting ‘bombing parties’ as they clear their objectives. 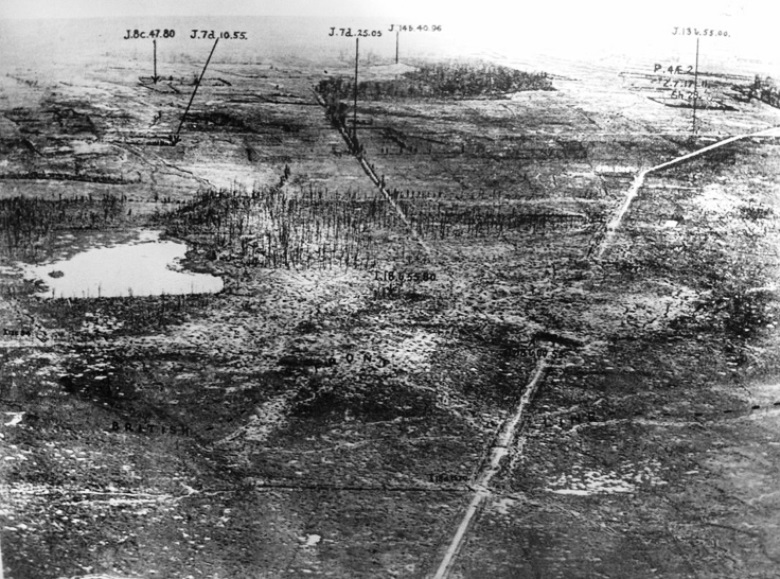 An overhead view from above the Menin Road. Bellewaarde Ridge is in the background and Y Ridge is visible below the lake