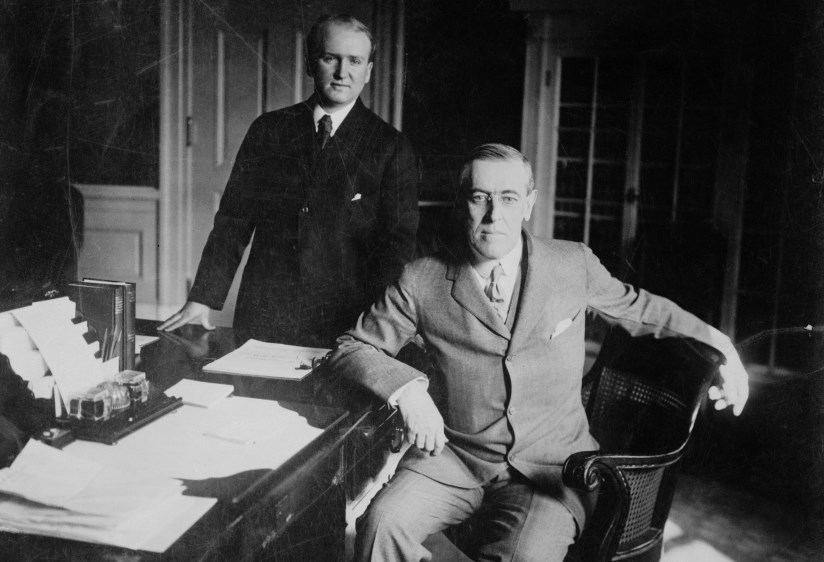 The day after Britain’s state of war became official, United States Secretary of State William Jennings Bryan asked the belligerents to agree to the laws of naval warfare as laid down in the 1909 Declaration of London, one of many prewar international conferences convened to limit the impact of war on soldier and civilian alike. While the Central Powers quickly agreed, the Entente allies refused. Instead, the British Foreign Office was quickly appointed to organize the systematic blockade of German and Austrian shipping, and the British Admiralty asserted the right to interdict contraband cargoes on neutral ships. Since then, the list of prohibited items — like the lengths to which the allies are willing to go in enforcing it — has only grown, and is becoming more expansive all the time.

Asserting America’s traditional views on international law and the rights of neutral nations, Bryan began to write a diplomatic letter in protest of these actions, but President Wilson’s adviser Edward M. House lobbied him to tone down the communication, and Undersecretary of State Robert Lansing was instead appointed to lobby London to modify their restrictions, tacitly accepting the validity of the allied blockade. Speaking by telephone via transatlantic cable, House and Foreign Minister Sir Edward Grey predicted a Lusitania-like tragedy would result from the German U-boat blockade of the allies, and the sinking of the doomed passenger liner in May further reduced Bryan’s already-attenuated influence in the Wilson cabinet.

When diplomatic correspondence regarding the incident grew heated in June, Bryan resigned, letting Undersecretary Lansing take his place. The move has helped reveal the true structures of power and information flow in Wilson’s administration; for instance, the most important person in the White House is Joseph Patrick Tumulty, the president’s personal secretary (see above) who helps his boss filter a paper river of diplomatic and open sources of intelligence on the situation in Mexico, and whose position will eventually evolve into the modern-day Chief of Staff. In the immediate wake of the Lusitania‘s sinking, it was Tumulty who spoke for Wilson in the press, not Bryan. 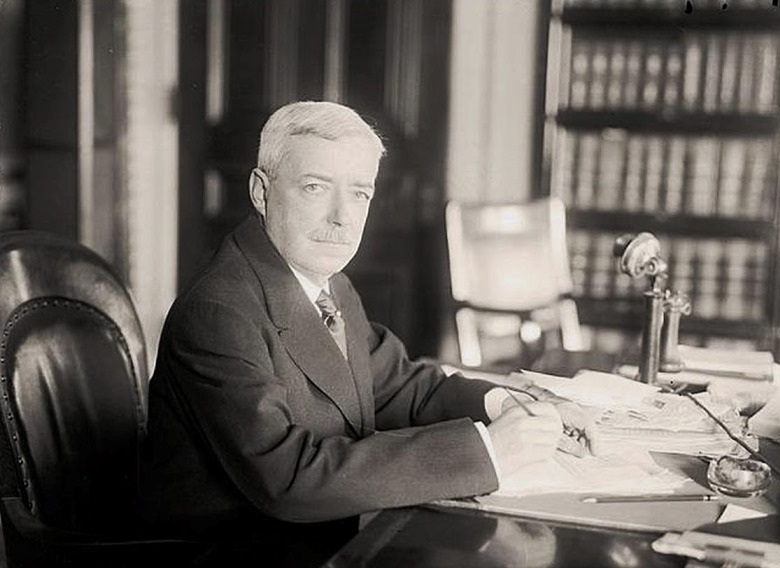 Robert Lansing in his office. Note the busy staging of his desk blotter, the ashtray, and the telephone

Today, the United States publishes the third diplomatic note to Germany in reference to the Lusitania. Responding to the most recent German note, which accused Wilson of being too provocative and un-neutral, Lansing rejects the contention of the Kaiser’s government that the passenger liner was secretly armed, insisting that American customs officials inspected the ship properly.

Whatever may be the contentions of the Imperial German Government regarding the carriage of contraband of war on board the Lusitania or regarding the explosion of that material by the torpedo, it need only be said that in the view of this Government these contentions are irrelevant to the question of the legality of the methods used by the German naval authorities in sinking the vessel.

But the sinking of passenger ships involves principles of humanity which throw into the background any special circumstances of detail that may be thought to affect the cases, principles which lift it, as the Imperial German Government will no doubt be quick to recognize and acknowledge, out of the class of ordinary subjects of diplomatic discussion or of international controversy.

Whatever be the other facts regarding the Lusitania, the principal fact is that a great steamer, primarily and chiefly a conveyance for passengers, and carrying more than a thousand souls who had no part or lot in the conduct of the war, was torpedoed and sunk without so much as a challenge or a warning, and that men, women, and children were sent to their death in circumstances unparalleled in modern warfare.

A subtle shift is taking place in Wilson’s policy. Although he is hardly eager to take America to war, the president surely understands the stakes, and is re-conceiving the country’s neutrality in such a way that German policy increasingly stands in direct conflict with it. This shift reflects Wilson’s growing awareness of clandestine German activities aimed at destabilizing Mexico and conducting sabotage in North America. The Kaiser’s eventual decision to cancel unrestricted U-boat warfare will put the brakes on this process for a while, but his reversal in 1917 will finally bring the United States into the war.

An international lawyer, Lansing would seem to be the ideal replacement for Secretary of State. But Wilson largely restricts his role to writing diplomatic correspondence, instead taking personal charge of most foreign policy decisions and letting House act as his personal representative for the most sensitive negotiations with foreign states. Meanwhile, a new player is rising within the White House, and her presence will change everything.

Uniquely among American presidents, Wilson is a widower; his wife Ellen died of kidney failure the day after London’s declaration of war became official. This January, he met a woman named Edith Galt, and their romance has been such a whirlwind that Tumulty and the White House staff have taken pains to keep it out of the public eye so a scandal doesn’t erupt over perceptions of an inappropriately-short mourning period. Displaying the anti-Catholic bigotry of her racist southern upbringing as well as a measure of elitist snobbery, Edith dislikes Tumulty, and even before marrying Wilson in December she lobbies for the private secretary’s dismissal. Although these moves have little effect on the conduct of the Wilson administration yet, the internal war for power featuring Lansing, Tumulty, House, and Mrs. Wilson will have significant impact on the postwar peace process. 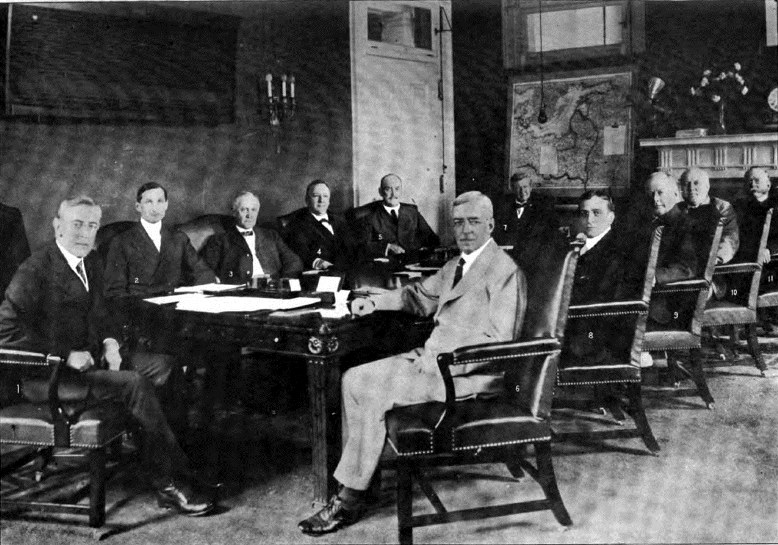 Robert Lansing in Wilson’s wartime cabinet, seated in the exact same spot where Bryan was recorded for posterity in 1913