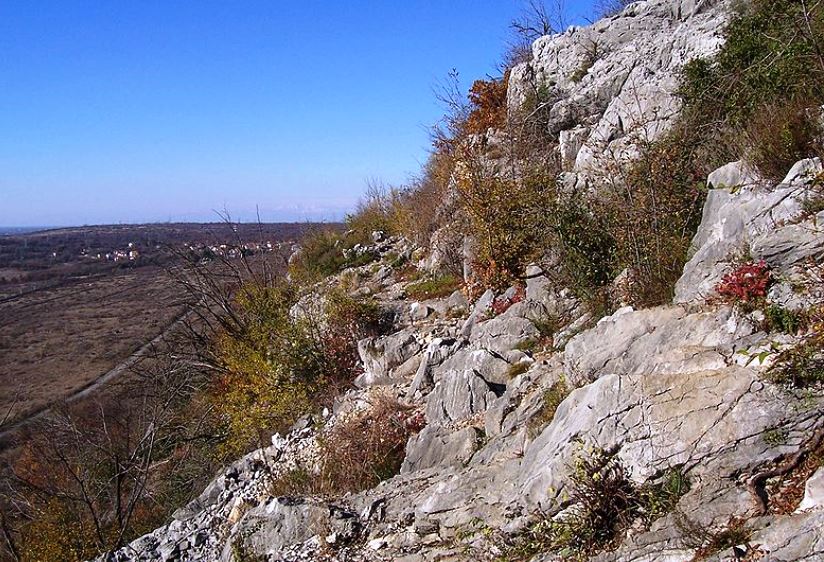 After four weeks of cautious forward progress known incongruously as the Primo Sbalzo, or ‘first rush,’ the Italian Army began serious attacks against well-prepared Austrian defenses along the Isonzo River with seven days of preparatory bombardment. On June 30th, fifteen Italian divisions started the assault along a 21-mile front, but they quickly found the extensive artillery fire was inadequate, and despite outnumbering the defenders two to one, the Italians only managed to gain a single bridgehead.

Today, two more Italian divisions begin an assault on the Carso Plateau, a cave-riddled plain which rises from the eastern bank of the Isonzo at the southern end of the line. This is followed by a general assault all the way to Podgorica in the north, with the Italians enjoying a six-to-one manpower advantage along some portions of the front. Yet gains are quite limited: the Italians win Mount San Michele on the plateau’s western edge, Mount Nero, and a foothold on the Carso, but nowhere do they advance more than one mile from their starting position by July 7th. In fact, by then the Austro-Hungarian troops have actually pushed the enemy out of the hills overlooking the city of Gorizia.

Italy entered the war expecting to rapidly swing the advantage to their new allies, but the opposite is happening. While Austro-Hungarian casualties are proportionally higher, the three-to-two loss ratio is still in their favor, as fifteen thousand Italians have died for almost no gain. 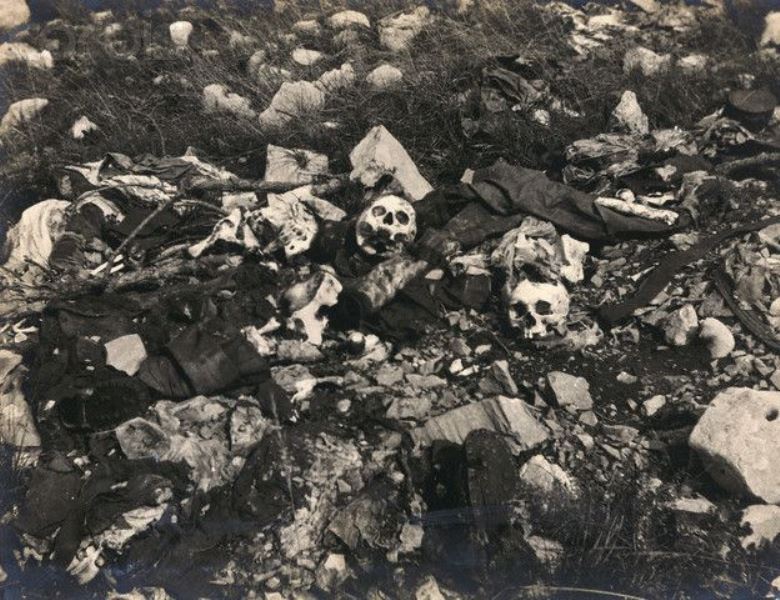 Grisly reminders of the First Battle of the Isonzo: desiccated skeletons cover the stony ground of the Carso Plateau

Two hundred Italian guns have failed to dislodge the Hapsburgs’ army. Commanding the defense, Croatian-born General Svetozar Boroević von Bojna has decided not to fall back from Slovenia as advised by the General Staff, withdrawing only to the eastern side of the Isonzo instead. He is one of the greatest defensive theorists of the conflict, and the advanced state of the Imperial and Royal Army’s trenches and fighting positions is testament to his skill. Reinforcements from two additional divisions pour into the line all the time, digging ever-deeper, while Italians try to cross the river and climb the steep, muddy banks under fire, winning only two small bridgeheads at Adgrado and Redipuglia.

The Italian commander, Luigi Cadorna, has apparently learned nothing from the experiences of his allies on the Western Front. His massed infantry attacks lack artillery support, and his insistence on simultaneous operations against the mountain fortress of the Trentino and at Gorizia wind up drawing his strength away from his main objectives. His two hundred guns are insufficient for a breakthrough, and fail to destroy the barbed wire entanglements which Boroević’s men have laid out so thoroughly, because their fire is spread over such a broad front.

Cadorna’s failure to push the Austrians off the high ground west of Tolmino will have particularly dire consequences later on, for the area eventually provides a launch pad for the dangerous Caporetto Offensive by the Central Powers. At the town of Podgora, which has been turned into a defensive bastion to protect Gorizia, there is vicious street-to-street fighting as two crack Italian brigades get within sight of their objective only to get beaten back. Halting in the face of such small success, Cadorna sets out to plan a new attack, but his strategy will not evolve much at all.

And like their allies, the Italians are soon suffering from a shortage of artillery ammunition, especially high explosive shells. Despite the undoubted courage of the Italian soldiers, their incompetent commander and their country’s shell shortage will continue to stifle victory for years to come. 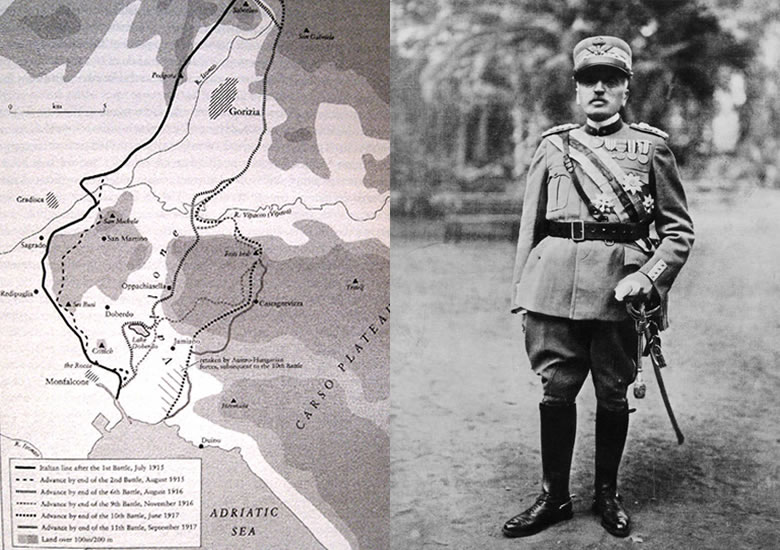 Left: the Isonzo campaign theater. Right: Field Marshall Luigi Cardona is one of the Great War’s most hidebound commanders