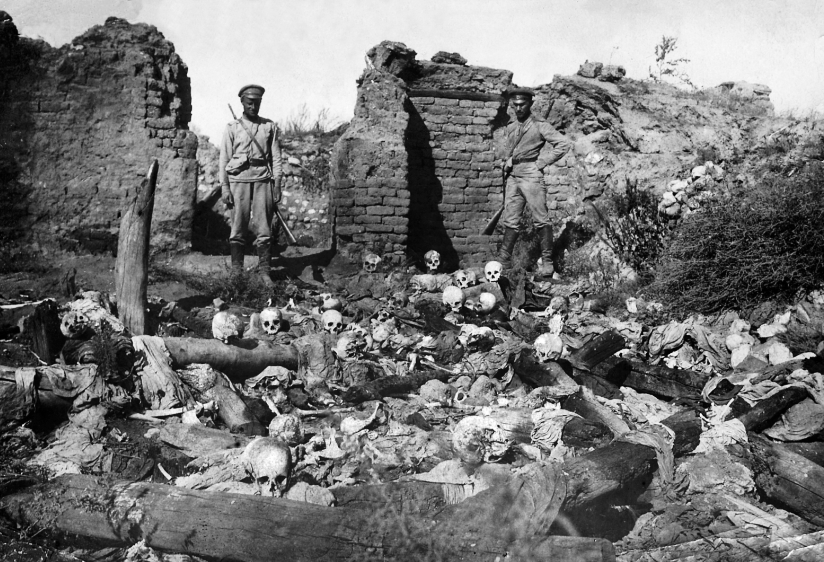 As Russian troops gather in the vicinity of Van, they take photographs of the remnants of a months-long genocide that has unfolded in the surrounding villages (see above). The world’s press is already reporting atrocities in the collapsing Ottoman Empire, and American missionaries are primary sources in that narrative. Yesterday, the United States Department of State received the following joint telegram from the French, British, and Russian governments using America’s ‘good offices’ to communicate a threat to the Young Turks who run the Sublime Porte.

For about a month the Kurd and Turkish populations of Armenia have been massacring Armenians with the connivance and often assistance of Ottoman authorities. Such massacres took place in middle April at Erzerum, Dertchun, Eguine, Akn, Bitlis, Mush, Sassun, Zeitun, and throughout Cilicia. Inhabitants of about one hundred villages near Van were all murdered. In that city Armenian quarter is besieged by Kurds. At the same time in Constantinople Ottoman Government ill-treats inoffensive Armenian population. In view of those new crimes of Turkey against humanity and civilization, the Allied governments announce publicly to the Sublime-Porte that they will hold personally responsible [for] these crimes all members of the Ottoman government and those of their agents who are implicated in such massacres.

It is the first known use of the phrase “crimes against humanity” in a diplomatic statement. Today, the New York Times publishes the joint cable, but without the words “new crimes of Turkey against humanity and civilization,” substituting “these fresh crimes committed by Turkey.” Does this alteration suggest the influence of President Woodrow Wilson — specifically, his interpretation of the ‘Martens Clause’ adopted by the 1899 Hague Peace Conference? I think so.

Until a more complete code of the laws of war is issued, the High Contracting Parties think it right to declare that in cases not included in the Regulations adopted by them, populations and belligerents remain under the protection and empire of the principles of international law, as they result from the usages established between civilized nations, from the laws of humanity and the requirements of the public conscience.

When he introduced this language, Professor Friedrich Martens was trying to resolve a dispute over so-called francs-tireurs, a form of civilian resistance during the Franco-Prussian War of 1871 that still haunts German occupation authorities and explains much about the Imperial German Army’s early atrocities in, and enduring harsh occupation of, Belgium. Known as the ‘Marten’s Clause,’ the compromise language is still active international law today, though interpretations vary. For instance, one school of thought is that the Martens Clause ought to apply to atrocities and crimes committed upon civilian populations within national borders. Another school holds that the Clause only applies to such acts committed within occupied foreign territory, as codified in the 1907 Hague Regulations, and not to the abuses of governments against their own ‘legitimate’ subjects.

Wilson, it will turn out in the fullness of time, belongs to the latter academy. 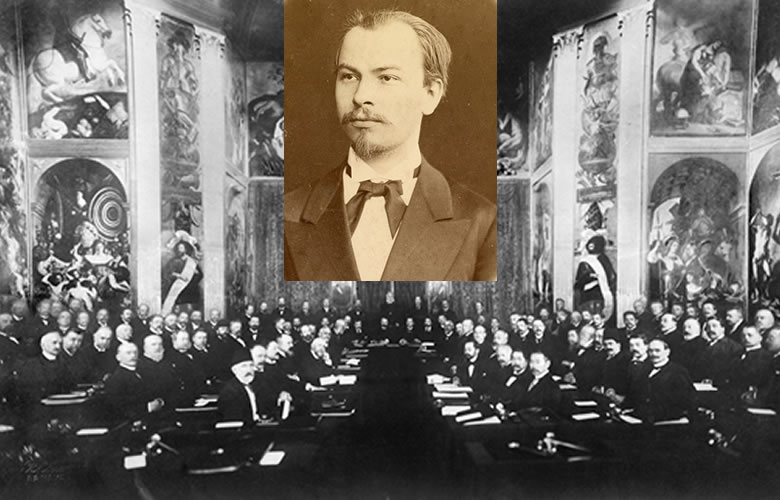 The 1899 Hague Convention. Inset: Friedrich Fromhold Martens, Russian diplomat and professor. Located in the neutral Netherlands, The Hague remained an active center of the international peace movement during the war — and still does today

Martens also uses the word ’empire’ in his Clause, which is interesting because it recognizes how complex the world of 1915 really was. ‘Empires’ were fundamentally real things — more than just legal fictions or commercial interests, they were vital aristocratic forces presented in a combination of ancestral and national bunting, and they had genuine impact on the lives of hundreds of millions of people. Wilson presides over an American imperial republic, and though the United States is loath to wear the name, the American flag is already planted in the Philippines, Hawaii, and elsewhere. As with current Wilsonian policy in Mexico, which reflects an interpretation of the Monroe Doctrine emphasizing economic exploitation over political subjugation or experimentation, a kind of benevolent racial paternalism is already visible. It later emerges in Article 22 of the Covenant of a weakling League of Nations:

To those colonies and territories which as a consequence of the late war have ceased to be under the sovereignty of the States which formerly governed them and which are inhabited by peoples not yet able to stand by themselves under the strenuous conditions of the modern world, there should be applied the principle that the well-being and development of such peoples form a sacred trust of civilisation and that securities for the performance of this trust should be embodied in this Covenant.

The best method of giving practical effect to this principle is that the tutelage of such peoples should be entrusted to advanced nations who by reason of their resources, their experience or their geographical position can best undertake this responsibility, and who are willing to accept it, and that this tutelage should be exercised by them as Mandatories on behalf of the League.

The character of the mandate must differ according to the stage of the development of the people, the geographical situation of the territory, its economic conditions and other similar circumstances.

Certain communities formerly belonging to the Turkish Empire have reached a stage of development where their existence as independent nations can be provisionally recognized subject to the rendering of administrative advice and assistance by a Mandatory until such time as they are able to stand alone. The wishes of these communities must be a principal consideration in the selection of the Mandatory.

Other peoples, especially those of Central Africa, are at such a stage that the Mandatory must be responsible for the administration of the territory under conditions which will guarantee freedom of conscience and religion, subject only to the maintenance of public order and morals, the prohibition of abuses such as the slave trade, the arms traffic and the liquor traffic, and the prevention of the establishment of fortifications or military and naval bases and of military training of the natives for other than police purposes and the defence of territory, and will also secure equal opportunities for the trade and commerce of other Members of the League.

There are territories, such as South-West Africa and certain of the South Pacific Islands, which, owing to the sparseness of their population, or their small size, or their remoteness from the centres of civilisation, or their geographical contiguity to the territory of the Mandatory, and other circumstances, can be best administered under the laws of the Mandatory as integral portions of its territory, subject to the safeguards above mentioned in the interests of the indigenous population.

It is largely due to Wilson’s influence that the postwar peace process will not punish the leaders of Turkey after all. Secretary of State William Jennings Bryan is on his way out, and the incoming Secretary, Robert Lansing, declares it is “more or less justifiable” that the Young Turks are deporting Christian minorities from combat zones. While Lansing admits the Armenian deportations are one of “the blackest pages in history,” even justifying American intervention by 1917, his diplomatic policy will never interpret the Martens Clause as a legal basis for war crimes trials of high-ranking Turks.

Indeed, at American instigation the Commission on the Responsibility of the Authors of the War and on Enforcement of Penalties will reject Marten’s phrase “principles of humanity” as ground for prosecutions of Turks, and as a result the Treaty of Versailles makes no mention of “crimes against humanity” in Articles 227 to 230, which establish a basis for a criminal court to try the German Kaiser. But by then, he has taken refuge in Dutch abdication, and the Netherlands are unwilling to extradite him. The embarrassing spectacle forestalls further attempts at justice for the most unforgivable horrors of the Great War. 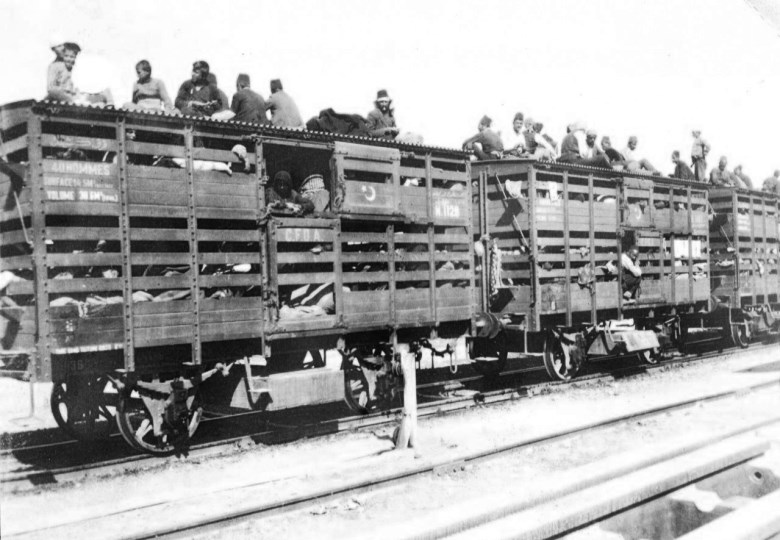 The luckiest Armenians being forcibly deported by rail; most refugees were forced from their homes on foot in mid-Winter