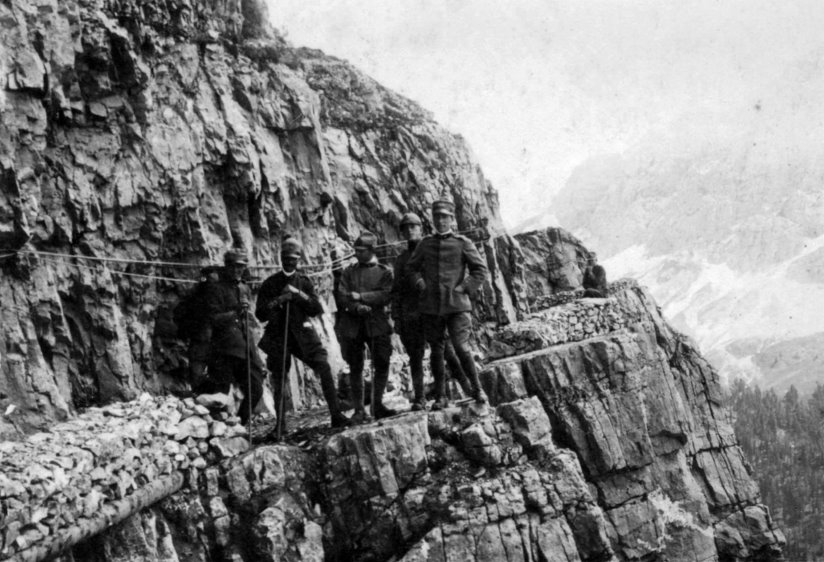 Last night, small groups of Italian mountaineering troops (Alpinis) advanced all across the frontier of the Austro-Hungarian Empire from the Stelvio Pass to the Isonzo River. Snowy here even in the late Spring, the weather turned to sleet and freezing rain along the Trentino boundary as they marched in single file through the dead, dark of night. Climbing steep, narrow paths, the advance elements of the Italian invasion arrived at their first Austrian positions with the dawn, finding many of them abandoned, for the Viennese defensive plan is to defend their forward positions as lightly as possible. But there were over a hundred skirmishes in the darkness, and both sides’ press releases are picturesque, if not grotesque.

To punctuate the point, with the broad light of day the thunder of Austrian guns shattered the icy quiet, announcing what will come to be known as ‘The White War.’ Most of the 480-mile long boundary zone is impossible terrain for operations by large forces; only the far eastern end, between Pontebbo and the Adriatic Sea, is suitable for any large-scale battles. While the new front being created in these early days of apparent Italian success will see its grisliest scenes around Caporetto and the Isonzo, the fighting along the great curve of the Trentino Salient will be the most legendary, and on the first day the Austrians have artillery superiority. The heaviest Italian guns are far behind these troops, for hauling howitzers up mountains is not an easy task at all. 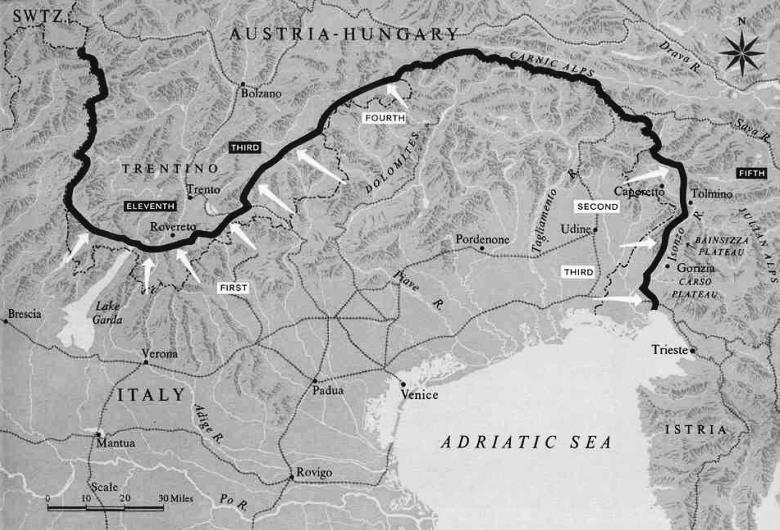 A map of Italian offensive efforts during 1915. Note how all the fighting takes place where railroads can support mobilization. Trentino is a natural fortress with mountain walls on all three sides

On paper today, the Italian Army has a strength of 1.2 million men, but in reality has only about 750,000 rifles with which to equip them, and only about 700,000 are capable of front line service. When the Italian government first began making contingency plans for war with Austria last September, its military had still not replaced the weapons and material used up during their 1911 invasion of Libya, while much of the remaining supplies and ammunition had been allowed to deteriorate to uselessness. Production and procurement have been drastically ramped up in the last months, particularly since Italy struck a bargain with her new allies to attack Austria in exchange for financial support and promises of an Adriatic empire; nevertheless, the Hapsburgs still have a months-long head start in converting their economy to wartime organization.

And Italy only goes to war with Austria. Sharing no border with Germany, Rome decides not to invoke the Kaisers’ military alliance upon themselves in hopes of making cooperation between the Central Powers more difficult. It will be more than a year before these de facto belligerents formalize their relationship. Instead, Prime Minister Antonio Salandra and German Chancellor Bethmann-Hollweg indulge in dramatic public recriminations, each blaming the other for the breakdown of Rome’s former alliance with Vienna and Potsdam. 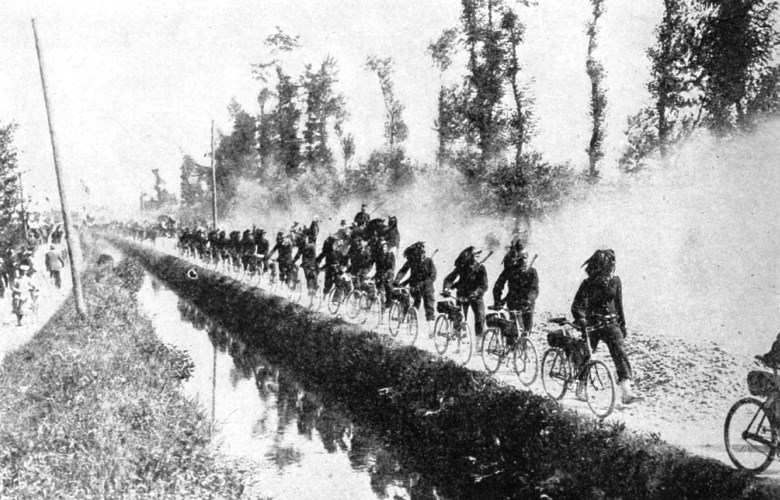 Despite fighting uphill against prepared defenders, the Italians do score early victories, and wartime enthusiasm peaks. Today, Italians read glowing coverage of the capture of Montozzo Pass, a height nearly two miles above sea level, objectives seized by infantry on bicycles, and rapid advances through numerous Dolomite valleys. Episodes of savage fighting at close quarters feed operatic sensibilities and war fever. Defying national stereotypes, the Italians who engage in these first days of the Great War are professional, competent, and even successful in addition to being audacious. Italian pilots display aggression, daring, and improvisation.

As Field Marshall Luigi Cardorna, the Italian Chief of Staff, marches his armies through ‘redeemed’ towns and villages as far as the Torre River that welcome their ‘liberation’ from the multilingual Empire, the Italian national dream seams to have blazed into waking reality. It is a heady time of false optimism and limited casualties that will give way to sober remonstrance with the rains that swell the Isonzo Valley, where the Austrians have not left Cadorna a single intact bridge to cross. The illusion of speed will soon be dissipated by the reality of modern battle; the Italian state has expanded the war along a new front, but they have not changed the nature of the conflict. 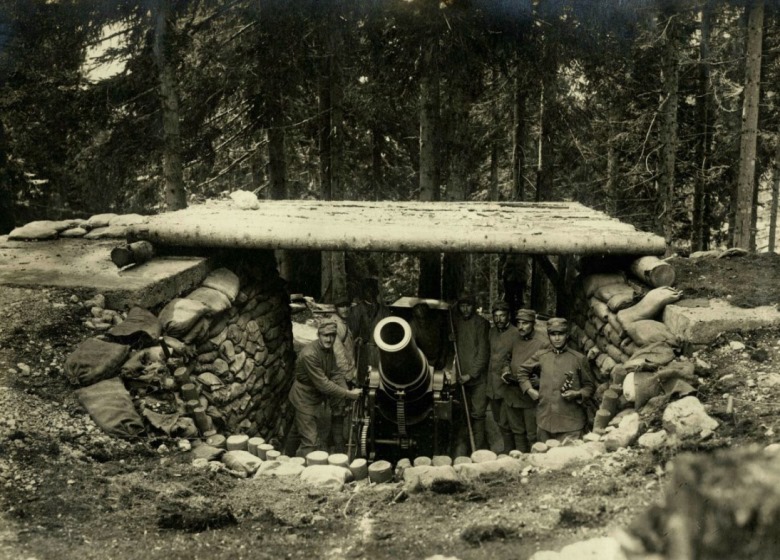 An Italian 210 mm mortar in a fighting position. Note the use of overhead cover against counterbattery shrapnel fire, a concrete shelter, and retaining/drainage features, all of which would be perfectly appropriate on the Western Front