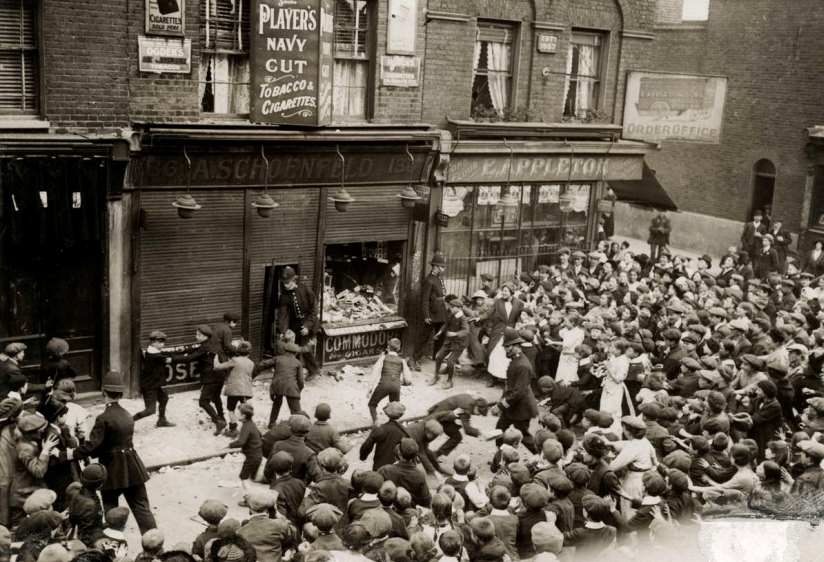 Three days have passed since a German torpedo sank the RMS Lusitania. By voicing their pain, the bereaved families of lost crew members have inspired a simmering anger in the diverse city of Liverpool, where the resulting violence has grown steadily worse with each passing day.

The trouble started in the North End the morning after the sinking when a raging mob of English subjects smashed the windows of a Walton Lane grocer and threw the food from the shelves into the street. Dimler’s, a store on County Road, was attacked shortly thereafter. Even as police attempted to break up the crowd, the riot doubled in size and moved on to Spellow Station, where three more shops were damaged. The front of Deeg’s, a shop on Fountains Road, was torn off and destroyed. That evening, nineteen people were arrested for smashing a pork butcher’s shop on Robson Street.

Nor did the anger abate overnight, especially in the North End. Dimler’s was attacked again yesterday morning; afterwards, the violence spread to Heyworth Street, Fox Street, Richmond Row, Juvenal Street, and Mile End. On Scotland Road, a pork shop was “entirely looted.” Police made another 48 arrests, but today’s crowd is the largest yet, and they are in no mood for obedience. Two thousand people descend on the Mill Street neighborhood, overwhelming the police presence and wrecking every pork butcher in the city whether it is German-owned or not.

Contrary to our latter-day impression of the Great War as a conflict sparked by nationalism, distrust, and hatred, the war is actually creating those feelings where they never existed beforehand. Whereas more than fifty thousand Germans lived and worked in Britain prior to the outbreak of fighting, with many thousands becoming naturalized citizens, anti-German feelings now run so strong that the victims of mob violence must be interned for their safety. Ironically, just three months ago the growing anti-British anger and vitriol of German public discourse was considered a ripe subject for British humorists. 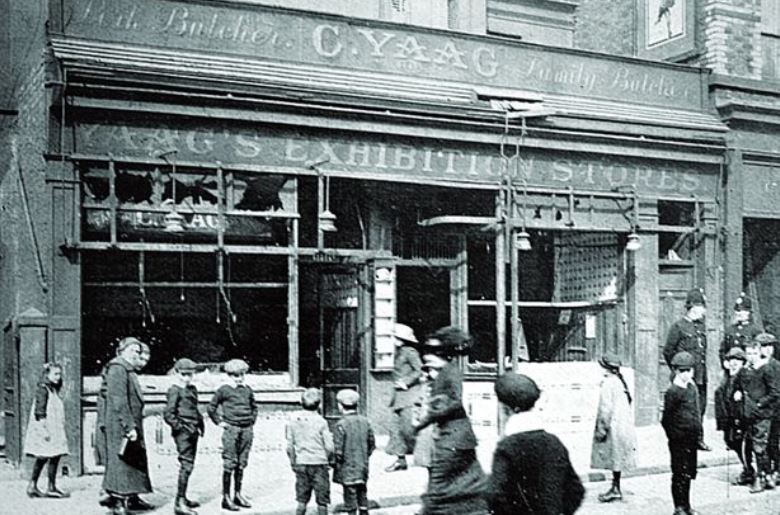 Christian Yaag’s store destroyed and looted in Liverpool. Two of his nephews were already serving in the British Army

This morning, the Liverpool riots spread to Manchester, where  a crowd of women starts jeering the occupants of another  pork butcher shop in the Groton neighborhood. Police manage to control the crowd into the afternoon, but when a mob estimated at ten thousand gathers in the afternoon and attacks two Openshaw butcheries owned by a naturalized German citizen named Leonard Lambert, law enforcement can do little to stop them.

By 7 PM, the riot has spread to Salford, where one pork shop is menaced and another is looted. Hard-pressed, the police are able to keep the crowd from attacking a pork butchery owned by a native-born child of German parents, but unable to stop people from throwing stones to smash the windows. As patrol vans arrive with more police, the crowd moves on to the Trafford Hotel, and order is not restored until 2 AM.

The violence in Manchester is even worse tomorrow. As if smashing and looting are not enough, by 10 PM a crowd of thousands once again surrounds the Lambert family in their upstairs apartment, assaulting them and putting Lambert’s friend in the hospital before setting the building on fire. Meanwhile, in Liverpool and London the riots are no longer specifically anti-German: by the fourth day, Russian, Chinese, and English-owned shops are all under attack as rumors run wild in the street.

Meanwhile, today the first 67 Liverpudlian rioters to be arrested appear before the Dale Street Police Court, where a judge sentences them to days or weeks in jail. Fulfilling a threat publicized in the newspapers, tomorrow, the same judge passes even harsher sentences on the rioters who are arrested today. These measures seem to work as the violence finally sputters out in the next two days. A few defendants try to claim relationships to the sunken vessel, but none of their stories check out. 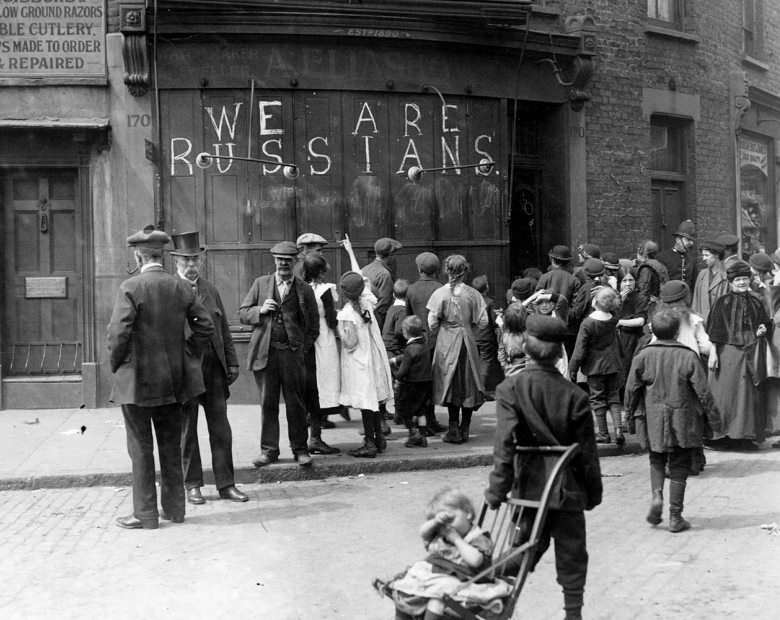 A chalk message on a shop in London’s east end. The Lusitania riots quickly morphed from anti-German to anti-foreigner

Altogether, Liverpool will receive more than five hundred damage claims totaling about £50,000,000 in today’s money, but will pay none of them. Instead, the victims of the violence are all embarked by train to camps in Hawick, Scotland, where most of them will spend the rest of the war. None of them are ever compensated.

The conservative press frames the riots as a justified response to what is only the most recent horrific act by Germany. For in addition to the sinking of the Lusitania, less than three weeks have passed since Germany first used poison gas on the battlefield, and in just the last few days British papers have carried stories of the German defenders fouling wells in Southwest Africa. In fact, these are not the first anti-German riots of the war: when a Sunderland court set aside the treason conviction of Adolf Ahlers last December just two days after a German naval raid had killed or injured hundreds of civilians nearby, it sparked a daylong rampage against German-owned businesses in the area. Nor will this be the last anti-German riot: a Zeppelin raid on the night of June 6th will spark another two days of riots in London.

Rather than spur the British government to protect its German subjects, these events result in oppressive laws, internment, and forced repatriation. By the end of the war, the ethnic German community in England will be less than half the size it was when the conflict began. 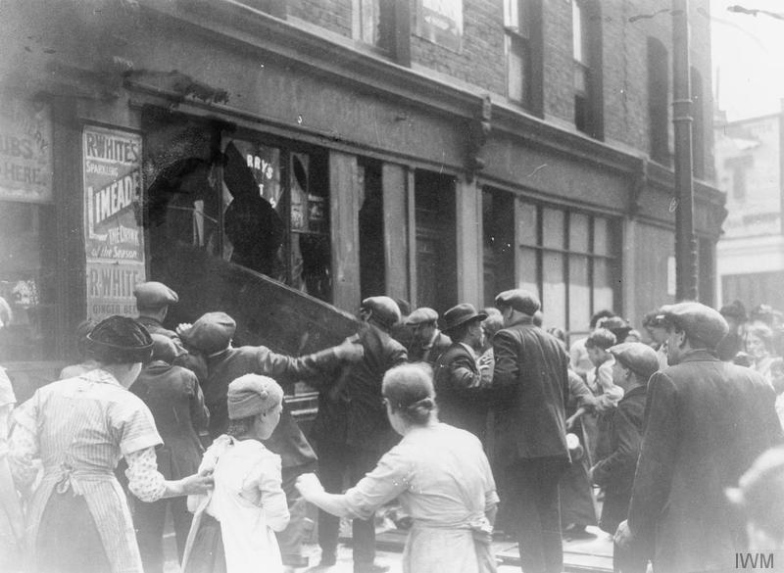 A store on Deptford High Street in southeast London being attacked by an angry mob. Via the Imperial War Museum

Share on FacebookShare on TwitterShare on Google+
Britain, newspapers, propaganda, social change
11 - May Flowers, 1915 - Old World In Ruins
Posted on May 10, 2015