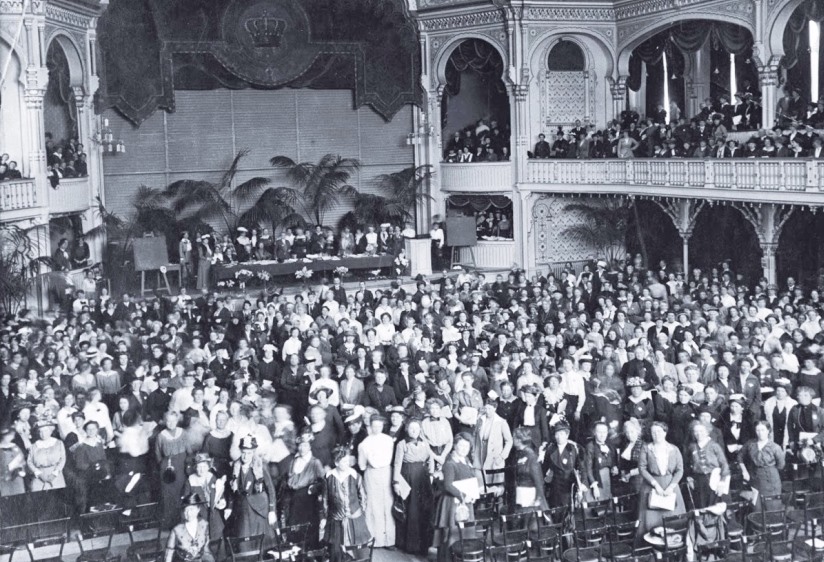 It is the final day of the the Women’s Peace Congress at The Hague (see above), a gathering of 1,136 women from twelve different countries belonging to member organizations of the International Woman Suffrage Alliance (IWSA). With American Jane Addams presiding, the conference adopts a manifesto calling for international cooperation to end the war, disarm the nations, internationalize the seas, promote peaceable national self-determination, and create an international court as well as a ‘Society of Nations’ to prevent another global conflagration.

Establishing an International Committee of Women for Permanent Peace, the congress chooses a delegation of thirty women to meet with officials of the combatant nations and plead their cause over the next two months. While these efforts fail to halt the conflict, their proposal for ‘continuous mediation’ to defuse international tensions will survive the war, and many of the proposals of the congress will become the standard template for global diplomacy aimed at reducing hostility and armed conflict. Woodrow Wilson’s Fourteen Points are suffused with suffragists’ suggestions. In a very real way, the present-day diplomatic order of nations was conceived and nurtured in the Netherlands a century ago today.

The organization birthed at the confab will eventually rename itself the Women’s International League for Peace and Freedom (WILPF), which still exists in Geneva. Jane Addams, future Nobel prizewinner and co-founder of the Chicago social service organization Hull House, is elected to lead it. One of the most powerful figures of the Progressive Era, Addams is credited with inventing the American social work profession, and will go on to help start the American Civil Liberties Union. For Addams, this conference has been a baptism of fire; if there were any remaining questions about her breathtaking brilliance and powers of organization, the last three days of the congress have surely put them to rest. 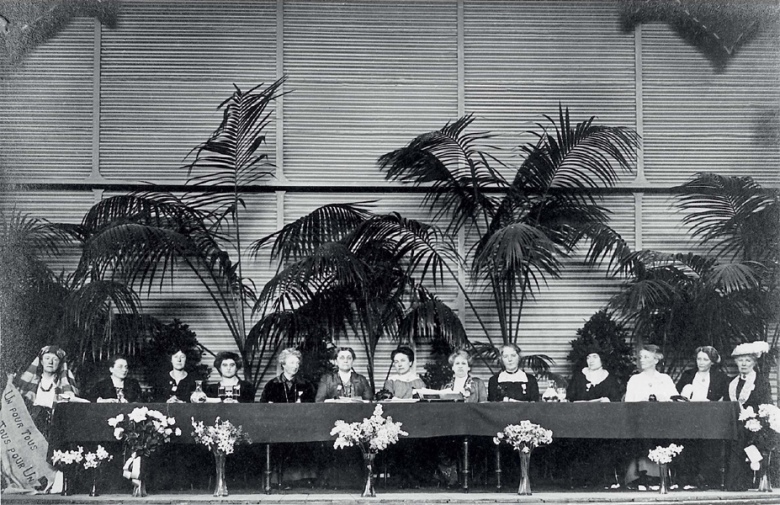 Seated in the sixth chair from the left, Addams presides over a plenary session of the Women’s Peace Congress at the Hague

Responding to the invitation of Dutch suffragist Aletta Jacobs after the scheduled Berlin conference of 1915 was cancelled by the outbreak of war, almost 1,500 women originally tried to attend the congress, but not all of them could make it. The belligerent nations have all taken measures to squelch such pacifistic endeavors by their citizens: Britain first refused to issue passports to some participants, then suspended commercial ferry service between the British port of Folkestone and the neutral Dutch port of Flushing, thus blocking most of the 180 British women who tried to go. Indeed, the Royal Navy would not let Addams’ own boat, the Noordam, pass through the English Channel until the congress had very nearly started. And London’s ‘peace blockade’ has been outdone by their allies: the governments of Russia, Serbia and Japan have refused to let any delegates travel to the neutral Netherlands, while the leaders of French feminist organizations actually send a communique to the congress demanding that the 28-woman German delegation repudiate their nation’s aggressive war.

Have they disavowed the political and civil crimes committed by their government? Have they protested against the violation of Belgian neutrality? Against the attacks on human rights? Against the crimes of their army and navy? If their voices have been raised, it was too weakly to be heard even faintly in our violated and devastated lands. We cannot renew our collaboration until, for them as for us, respect of the law will be the foundation of all social action.

Given the barriers thrown up before them, it is actually amazing that Austrian, Hungarian, Italian, Polish, and Belgian suffrage organizations have all sent representatives to the congress, and that so many have actually arrived. Convinced that women can rid the world of war with the power of the ballot, and ionized by international socialism, the participants are all stepping outside the normal bounds of mainstream acceptability. Also missing is the British National Union of Women’s Suffrage Societies (NUWSS), one hundred thousand strong, which has endorsed the war effort. The congress thus represents a splintering in the movement for universal voting rights, with mainstream suffragists marching behind patriotic banners while radical and pacifist elements adopt the banner of peace and world unity. In the United States, where pacifism has heretofore been the civic domain of conservatives and industrialists, the Women’s Peace Congress represents a whole new kind of peace movement.

Addams is interested in ‘direct action’ — primarily organized protests, such as the August 29, 1914 silent peace parade in Manhattan. As the head of the Woman’s Peace Party, whose genesis took place in January through the efforts of parade coordinators, Addams has brought the best and brightest American women she could find. Economist and future Nobel Peace Prize laureate Emily Green Balch, a Quaker who will lose her Wellesley College professorship in 1917 for refusing to support the war, has attended; so has pathologist and investigator Alice Hamilton, who will go on to become the first female professor at Harvard University in 1919. It is little wonder they are able to access and influence President Wilson, an effort which does eventually bear some fruit in the postwar peace process. 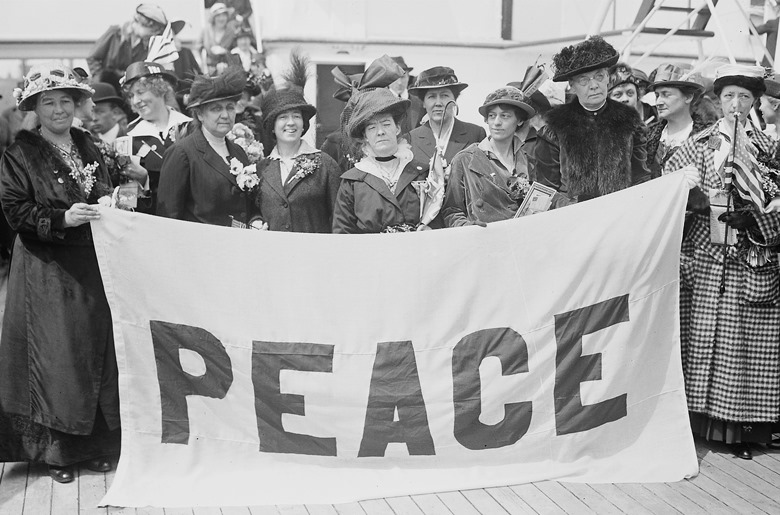 Standing above the P, Addams and fellow Americans hold the Noordam‘s flag. The woman above the E may be Alice Hamilton