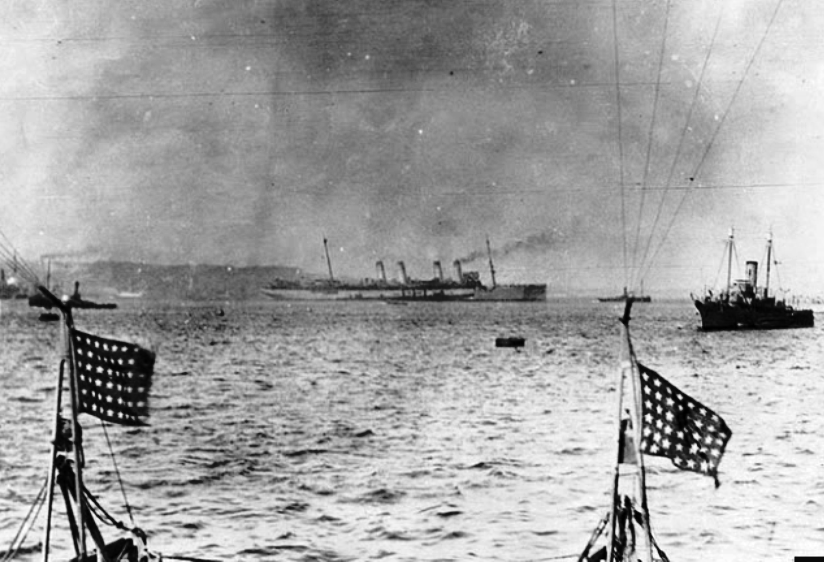 Above: the interned Prinz Eitel Friedrich in 1917, after conversion into the American troopship SS Baron von Steuben

Today, Count Johann Heinrich Graf von Bernstorff, the German ambassador to the United States and Mexico, publishes a diplomatic memorandum in American newspapers. Thanks to Bernstorff’s public relations savvy, America’s newspapers have already buzzed about the document for three days without publishing the full text. It is a complaint from His Majesty’s government accusing America of false neutrality and favoritism, rejecting President Woodrow Wilson’s efforts to change British blockade policy. And as Bernstorff surely knows, the memorandum coincides with a redoubled campaign of secret sabotage against the United States.

Both the memorandum and its publication have been driven by the interning of two German auxiliary cruisers. Korvettenkapitän Max Therichens finally surrendered the Prinz Eitel Friedrich at Newport News three days ago; the Kronprinz Wilhelm sails into Virginia waters today to capitulate, her crew out supplies and suffering from malnutrition. Throughout the crisis, Berlin has been in touch with Bernstorff and both ships by radio. Nothing about this affair is a coincidence. 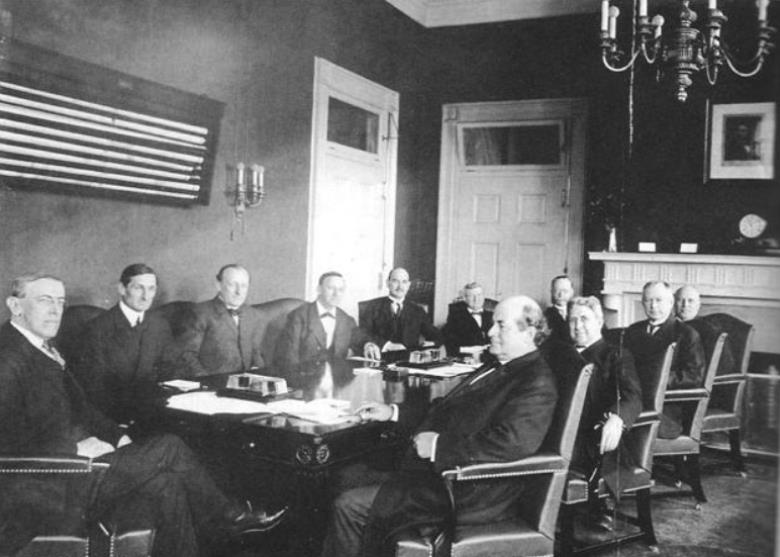 Wilson (left) and his cabinet in 1915. Secretary of State William Jennings Bryan sits first on the right side of the table

The Kaiser is particularly angry that Wilson won’t do more to insist on America’s right to deliver food to Germany, where rationing is already an unwelcome new way of life. His government has no suggestions how to achieve this breakthrough, given Britain’s absolute dominance of all seaborne trade routes to Germany. Charging that Wilson’s government has surrendered on principle and “accepted England’s violations of international law,” the memorandum also points out that American munitions are flowing to allied ports and killing Germans. Underlining this perceived hypocrisy, it even quotes Wilson’s August 1913 announcement of an arms embargo on neighboring Mexico, then in the throes of civil war:

I shall follow the best practice of nations in the matter of neutrality by forbidding the exportation of arms of munitions of war of any kind from the United States to any part of the Republic of Mexico — a policy suggested by several increasing precedents and certainly dictated by many manifest considerations of practical expediency. We cannot in the circumstances be partisans of either party to the contest that now distracts Mexico, nor constitute ourselves the virtual umpire between them.

In that speech, Wilson was responding to a law which predated his administration, but this point is elided from Germany’s complaint. Moreover, it is not the only time Bernstorff will manipulate the American press for maximum psychological impact. On May 1st, he also publishes a warning for Americans to avoid sailing on British ocean liners, specifically naming the Lusitania. With Germany’s surface threat to commerce practically evaporated, the true purpose of today’s manipulative memorandum is to justify the Imperial German Navy’s two-month old policy of unrestricted U-boat warfare against allied and neutral shipping. There will be blood.

Below: film of Wilson and Bryan in happier times.

Despite Bernstorff’s open opposition to his country’s use of unrestricted submarine warfare, his public relations efforts annoy columnists and editors across America — and corrode public opinion right along with them. Given Bernstorff’s role in oversight of German espionage and covert activities in the United States, including plans to drag America into a war with Mexico, this may well have been the intended outcome. Of course, diplomatic protocols normally aren’t so public, either, as the American Spectator points out this month in denouncing the memorandum’s “insulting” tone.

Count Bernstorff, with his superb talent for bungling, has met the indignation he has aroused by explaining that his strictures were unexceptionable since they were contained in a “Memorandum” and not in a “Note.” As though one should say that an insult was not an insult if it were written on a postcard and not in a letter.

Secretary of State William Jennings Bryan is already at work on America’s diplomatic reply, but he feels increasingly hemmed-in by competing and irreconcilable demands. Due to Britain’s naval power, domination of financial and insurance markets, and America’s lack of a merchant marine, President Wilson is unwilling to challenge British policy in any meaningful way, and the nation’s fragile economic recovery would end if it were cut off from British markets and resources. Yet Germany’s increasing belligerence, especially among her U-boat captains, is putting the upstart empire on a collision course with Washington, DC. 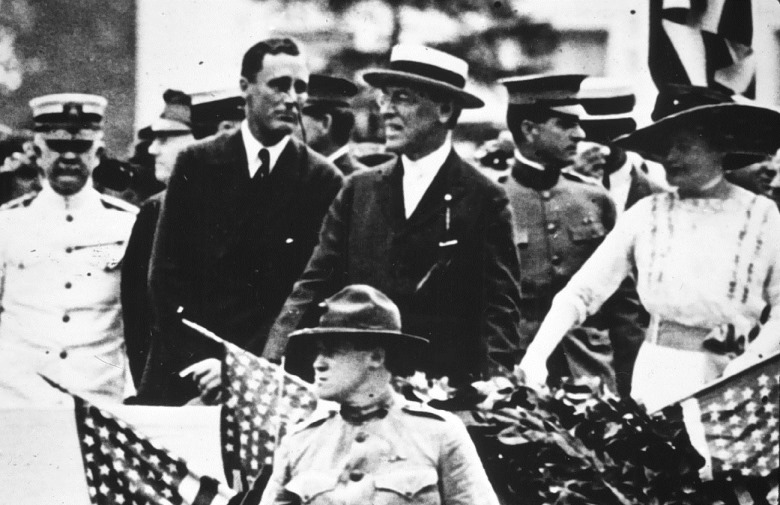