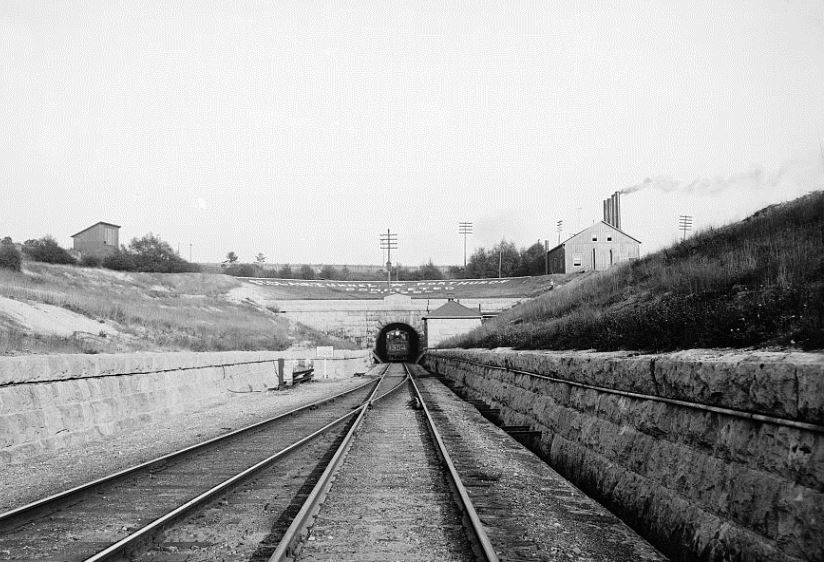 As seen above from the American side, the St. Clair railroad tunnel is one of the busiest border crossings in North America in 1915, carrying almost ninety percent of total traffic on the Grand Trunk line between Toronto and Chicago. As much as half the Canadian nation’s war material passes through the St. Clair Tunnel, and the only other way to get goods across the Detroit River to Windsor is by car ferry. So it is little wonder that Albert Carl Kaltschmidt, a German-born man connected to spymaster Franz von Papen, is hatching a plan to attack this strategic target by using a dynamite charge strapped to a board that is fixed to a pair of roller skates, lighting the fuse and letting the steep slope of the rails carry his bomb deep into the tunnel. It is just one of many ideas Kaltschmidt has examined to prosecute Germany’s secret war against the allied war effort in the United States.

While there have been many false reports and cases of frayed nerves, at least nine proven violent pro-German acts will be plotted or executed in North America before the end of 1915. Tonight, Kaltschmidt has other targets in mind for his two operatives. The first is Charles Respa, a German immigrant who failed to complete his required military service before coming to America and therefore faces arrest and imprisonment if he returns home. Promising Respa that he can escape this penalty by aiding Germany’s covert war in North America, Kaltschmidt sends him across the border tonight with William Lefler, the night watchman at the Peabody Overall Factory in Windsor, Ontario. Together with Respa’s sister, they place two bombs: one at Lefler’s workplace, and another at the nearby Windsor Armory, where hundreds of servicemen sleep tonight.

Respa, who has worked with electrical components in factories for years, designs and assembles the detonators for Kaltschmidt. But after Respa departs the scene, Lefler’s conscience gets the best of him, so he disarms the bomb at the Armory, which may actually cause casualties. Only the unoccupied Peabody plant takes any damage when the dynamite charge explodes at 3:15 AM. Already on high alert for acts of sabotage and terrorism, Ontario police immediately assume a hostile enemy action is responsible. Hundreds of police and military personnel form a dragnet, finding more than sixty sticks of dynamite hidden in various locations around the city: at a factory selling trucks to Britain, outside a worker residence for Ford City employees, in a factory being converted to munitions production, and at the Tate Electrical company where Kaltschmidt once worked with Lefler and Respa.

Hoping to throw investigators off his trail, Lefler “discovers” the latter bundle of dynamite himself. Safely out of reach in the United States, Kaltschmidt reads an account of Lefler’s “discovery” in the newspapers. A German national and businessman who was expelled from Canada at the beginning of the war, and remains angry at the loss of his employment, Kaltschmidt withholds the $200 he promised to Lefler, and gives Respa only $110 of the promised amount to disappear. Their motivations are nationalistic, but Kaltschmidt’s miserliness will be his eventual undoing, for his every move is already under close observation. 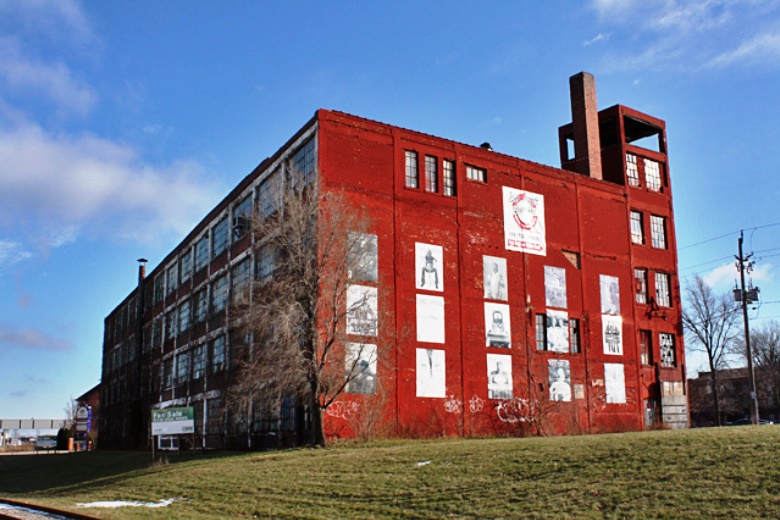 A Pinkerton detective named Francis Dimaio is immediately suspicious of Lefler’s narrative. A veteran of the South American pursuit of Butch Cassidy and Harry Alonzo Longabaugh, better known as the Sundance Kid, his high-profile successes have included prosecutions of ‘Black Hand’ extortion and kidnapping rings operating in American immigrant communities, and his investigation of the assassination of New Orleans Police Chief David Hennessy in an undercover prison sting is the stuff from which thrillers are made. Dimaio’s involvement in the investigation is an example of the Pinkerton Agency’s wartime role in Canadian and British intelligence operations: uniquely positioned to provide the sort of cross-border investigatory skills that uniformed Canadian law enforcement cannot exercise, and unrestricted by the constitutional or jurisdictional niceties that bedevil America’s infant counterintelligence efforts, Dimaio and the Detroit office of the Pinkerton Agency develop Kaltschmidt as a subject of interest within hours of the blast.

Under persistent questioning, Lefler eventually confesses, and is convicted at trial on the 29th of July. Revelation of his last-minute betrayal at the Armory infuriates Kaltschmidt, whose name soon leaks to the Detroit News. Information Lefler provides to Dimaio leads to Respa, who lives with the sister of one Carl Schmidt, a man already sitting in a Canadian prison for plotting to destroy the Canadian Pacific Railway bridge at Nipigon, Ontario. Inserting a Pinkerton agent into the Detroit Ford Motors plant to work with Respa, board with his family, and ingratiate himself deeply in their affections, the agency arranges an elaborate ruse in order to trick Respa into visiting a Canadian island in the international waterway on August 29th. Even then, the Pinkertons’ investigation does not end, for they thwart Respa’s elaborate efforts to arrange an alibi from jail while legal delays carry his trial into 1916.

An organizer of the Detroit chapter of the international pro-German Deutcherbund organization, Kaltschmidt continues his public recruitment and propaganda activities even as detectives and agents monitor his movements and gather information, including the Pinkerton files. In fact, he continues accepting large sums of money from Papen, eventually collecting $32,000 in all. The US Department of Justice is quite aware of him, but lacks a law to enforce against his activities until declaring war in 1917; he is finally indicted by the United States in May of 1917. At trial that December, his sister — who was supposed to procure the roller skates for the tunnel bomb — is tried with him, and sentenced to three years in the Detroit City Jail. Before he is sentenced to four years in Leavenworth, Kaltschmidt’s stinginess comes back to haunt and embarrass him as Respa and Lefler testify to his leadership in the plot. Kaltschmidt’s brother-in-law, and another conspiracy participant named Carl Schmidt, are also each sentenced to two years in prison. 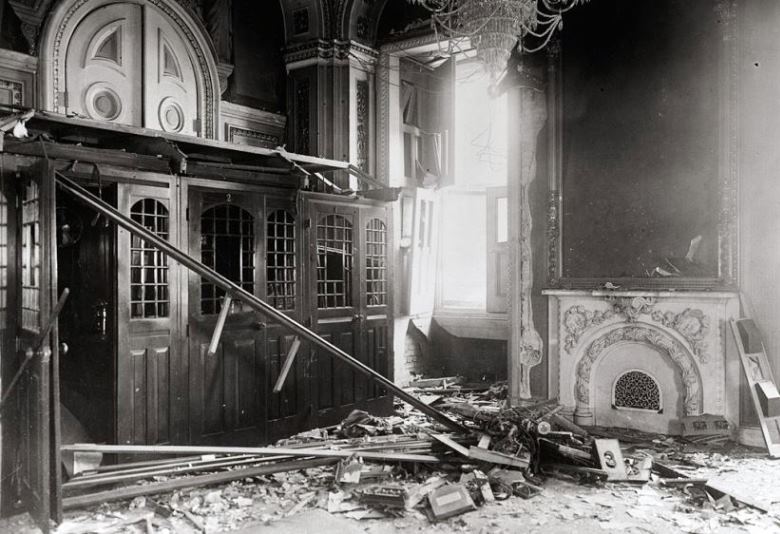 The US Senate Reception Room damaged by Muenter’s bomb

Pro-German violence in North America is not restricted to Canada, or even to those under the direct or indirect influence of German agents. On July 2, a former Harvard professor of German language named Eric Muenter leaves three sticks of dynamite and a timer in the Senate Reception Room in Washington, DC. Exploding twenty minutes before midnight, the bomb does some damage but kills no one. Muenter, who has been on the lam for years since trying to poison his pregnant wife, then places a bomb on board the SS Minnehaha in New York Harbor, a ship loaded with munitions bound for Europe, and sends a letter to the Washington Star to explain his actions.

Sorry, I had to use explosives (for the last time I trust). [The ship] is of the export kind, and ought to make enough noise to be heard above the voices that clamor for war and blood money. This explosion is the exclamation point to my appeal for peace.

After mailing his pseudonymous letter, Muenter tries to assassinate financial titan J.P. Morgan, Jr. for lending money to the allies. Shooting his victim twice in the groin with a pistol, Muenter manages to inflict little real injury, and is subdued by a servant holding a lump of coal as a weapon. Influenced as much by anarchist ideals as his pro-German feelings, Muenter will commit suicide in jail on July 5th; his bomb will detonate two days later, starting a fire but causing very little damage.