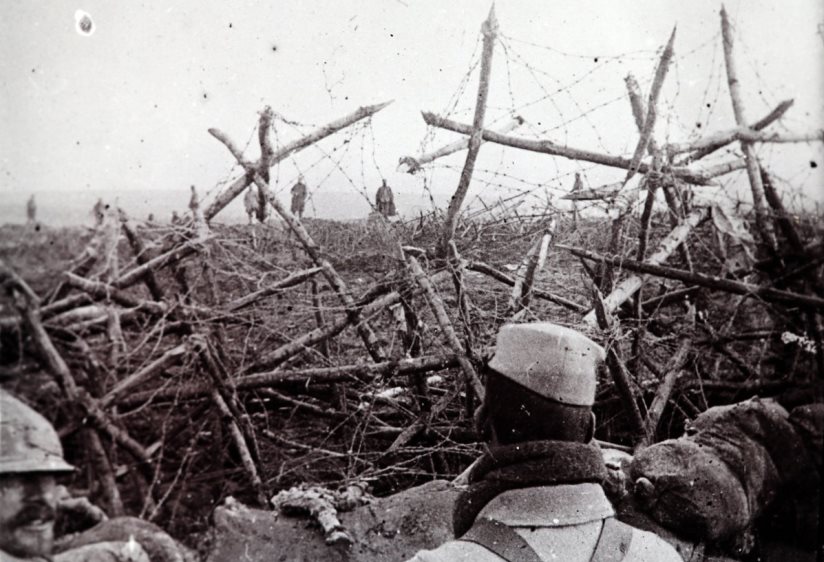 Above: through the wire, French troops observe Germans trying to surrender in 1915.

General Auguste Dubail was a newly-minted military school graduate when the last war between France and Germany began. Following a doctrine of entrenched defense with breech-loading rifles and already-obsolete mitrailleuse guns, the French Army was defeated and embarrassed by Prussia’s Maxim guns and superior numbers. The shame has deeply affected the French military establishment, which has adopted some German innovations, such as the use of a centralized General Staff, while entirely rejecting the defensive as a means to win victories. 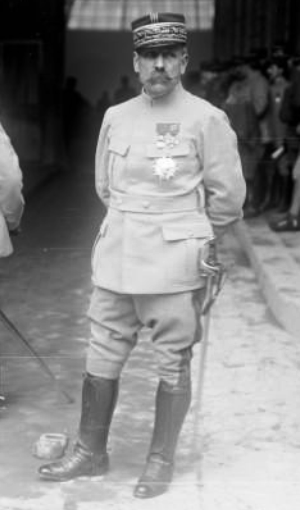 Gen. Dubail being honored in Paris

Despite the high casualty rates which have led French supreme commander Joseph Joffre to cancel his offensive in Champagne Province, limited French attacks continue all along the Western Front rather than surrender any occupied portion of France to the hated enemy. Fulfilling his orders to ‘attack, always attack‘ today, Gen. Dubail sends three corps into a pitched battle at Woëvre along the right bank of the Meuse River in Lorraine. Quickly overrunning their objectives at Fromezey, Gussaniville and l’Hopital Farm, the attacking wave nevertheless crests against massive German barbed wire obstacles in no man’s land. Rather than destroy the wire, Dubail’s high explosive artillery shells have been swallowed up by the muddy ground, leaving the deadly wire intact.

The battle then follows a bloody, familiar script as German machine guns and artillery smash the French assault. Dubail will press his command into the wire for the next seventeen days, gaining little ground in exchange for thousands of casualties — and losing it all to German counterattacks in May. Whereas French doctrine called for a ‘wall of fire’ (feu de bataillon) that French weapons could not support in 1870, forty-five years later French generals keep throwing their divisions into exactly that tempest, losing thousands a day in the process. And the biggest killer of all isn’t the shrapnel or the machine guns, it’s the wire which channels men into killing zones and entangles them in the open where the guns can butcher them. 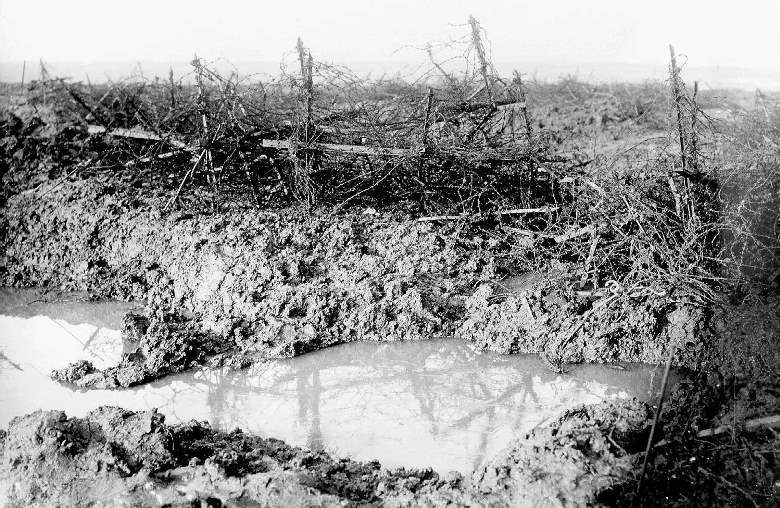 Whenever the ground was wet, high explosives had remarkably little impact on barbed wire obstacles, and attacking waves of infantry would immediately bog down. The churn of battle often mixed the wire with mud, forming steel canebrakes

Invented by an American rancher in 1874, barbed wire is simple to create in large quantities. Already in widespread use by European farmers, barbed wire appeared on the battlefield very early, usually in the form of fences used to protect trenches and deny the enemy an easy approach. With the emerging trench warfare tactics of raiding and infiltration, no man’s land is now turning into a barbed wire landscape meant to stop small teams as well as large attacks. Working by night with rubber mallets and blankets to muffle the sound, construction gangs from opposite sides sometimes blunder into one another in the darkness while erecting these forests of wire.

Offensively, everyone tries a number of tactical and technological solutions to the problem of barbed wire during 1915. Men throw their bodies across it, allowing comrades to walk across them; men throw rubber mats over the wire; gloves and uniforms are made with tougher fabrics; so-called ‘Bangalore Torpedoes’ are designed to blow a path through wire; wire-cutters become standard kit in all armies. Soon, a night-battle develops in no man’s land, with both sides constantly trying to cut the fresh wire their enemy has just erected or protect the wire they have just spent hours installing. 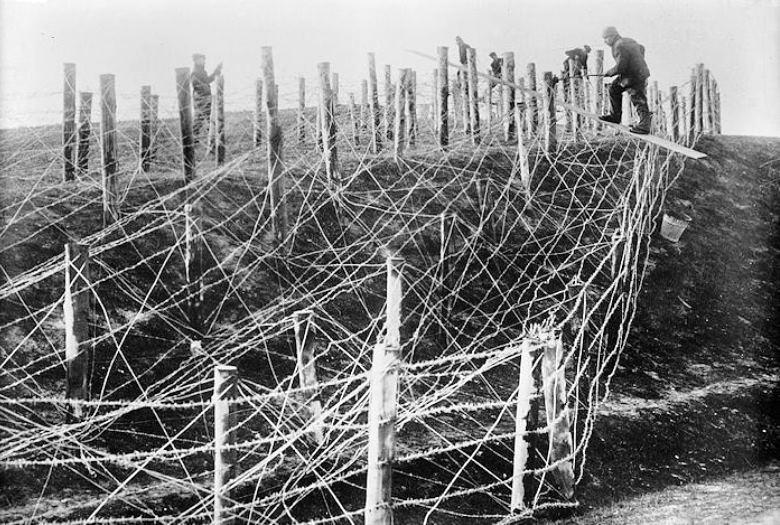 Germans complete another barbed wire obstacle. Vast fields of wire proliferated between the front lines in the Spring of 1915

Wire thus becomes one more aspect of the material battle between the allies of the Triple Entente and the Central Powers. The United States will export more than a million tons of barbed wire to France, Russia, Italy, Belgium, and Britain by the end of the war. Germans will invent concertina wire, also known as razor-wire, an improvement in cruelty that will become the standard for military-grade wire obstacles. Austria, which began the war with significant barbed wire defenses in Galicia, struggles to keep up with demand. Although the words ‘barbed wire’ do not appear in the Oxford English Dictionary in 1914, it has already become noun, adjective, and verb in 1915, reflecting its ubiquity on the battlefield.

Ultimately, allied generals on the Western Front respond to the challenge by giving up the element of surprise to have their artillery guns fire preparatory bombardments against enemy positions for days at a time before an assault. Some of the grisliest moments of the Great War result from the inevitable failures of this tactic, which usually leaves the battlefield a churning mass of mud and wire that still slows the speed of attacks to a crawl. Because a single machine gun crew can hold a field of barbed wire all day long against thousands of men, willpower and morale are no longer enough to succeed in the attack.

Thus the deadlock of the Great War solidifies in its ninth month. By the end of the war’s first year, tens of thousands of acres will be covered in barbed wire, forming a deadly barrier to all operations — and creating the immobile war of attrition as we remember it. 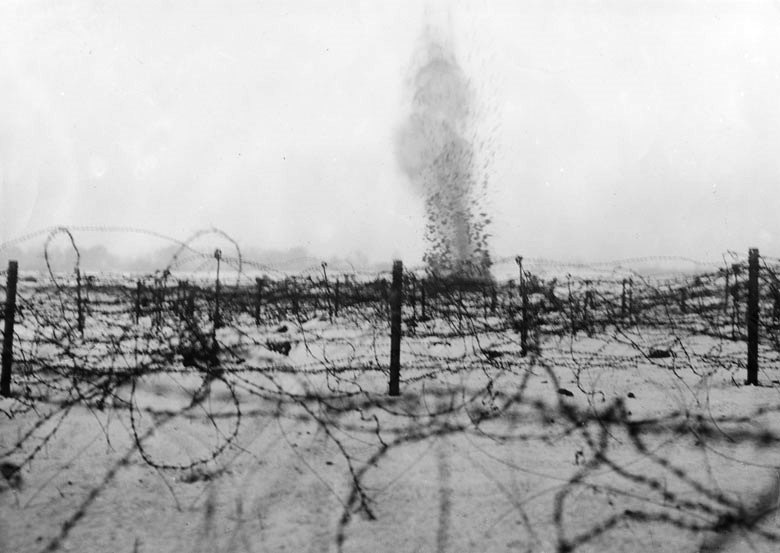 A high explosive shell bursts in a field of barbed wire. Rather than destroy the obstacles, these blasts tended to lift the wire and then drop it on the ground, forming a tangled mess that was not any easier for infantry to negotiate