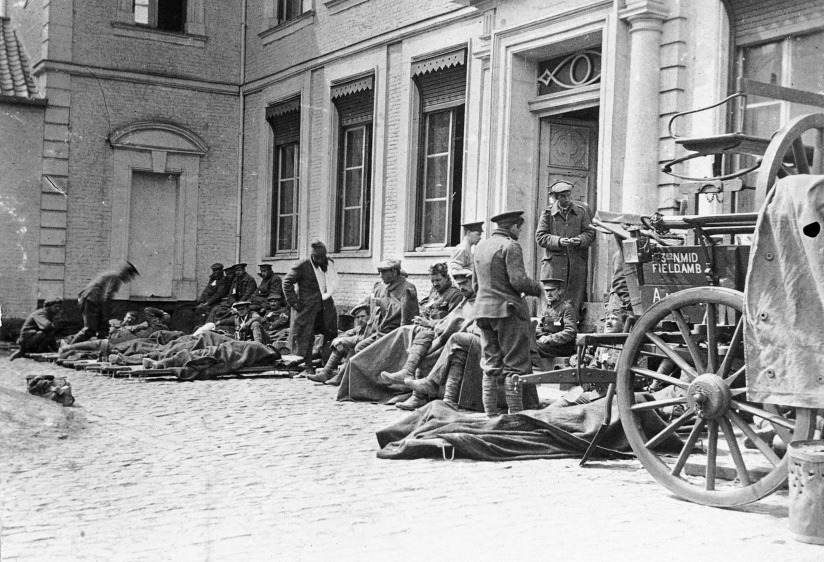 Above: wounded British soldiers being treated at the town of Ypres in October or November 1914.

Twenty-eight year old Private Louis Champromis was wounded five days ago while fighting in the Argonne. Alive but unable to move, he lay in the open for four days without food, water, or bandages while waiting for rescue. Finally recovered by a stretcher team today, Champromis is evacuated to the aid post at La Chalade, where he dies while receiving treatment for his injuries. He is buried in the nearest French military cemetery.

Trench warfare has plenty of horrors to offer, but the most pitiable of these is the plight of wounded men in no man’s land, where rescue is often impossible. Unlike previous wars, when the wounded could be picked up in the wake of armies as they moved across the land, the Great War has produced a death ground between static front lines — a belt of disease-ridden mud that is lousy with barbed wire and swept by machine guns and sniper fire. Champromis fell in a place where no one could retrieve him quickly enough to save his life from a survivable wound.

Today’s military medics refer to the first sixty minutes after wounding — the time period in which evacuation and treatment are most likely to save a soldier’s life — as the ‘golden hour.’ Even with modern technology, it is not always possible to remove a casualty from the scene of combat to a medical facility within that hour, so it is easy to understand why this was such a challenge to people living a century ago. Just like the weapons which cause the wounds, the demands of military medicine will provide a severe test for national limits of production, transportation, and scientific expertise. 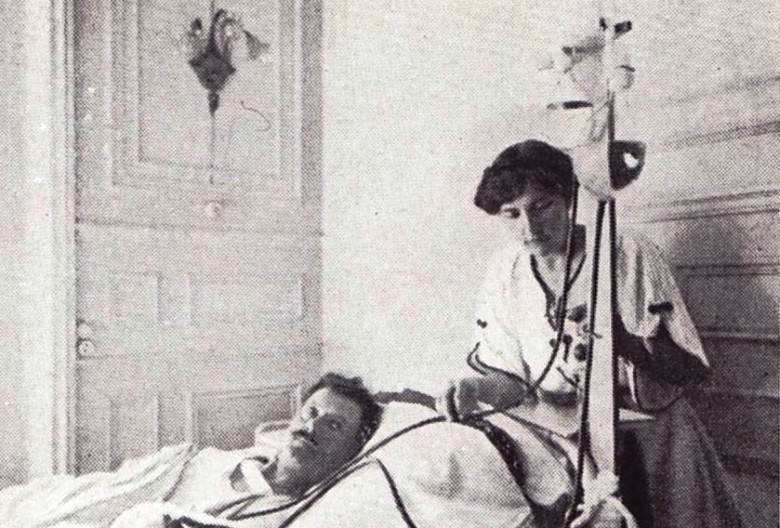 The Carrel-Dakin method in use. Antisepsis was critical for saving lives from wounds that were almost always infected, so the Great War saw the first engineering and widespread use of standardized, mass-produced chemicals and equipment

For the worst wounds, there are six stages to casualty treatment during the Great War. As the case of Private Champromis shows, the first stage — evacuation to an aid station — is usually the most dangerous and time-consuming, and almost always conducted by stretcher. Casualties are triaged at the aid station, with the most urgent cases being sent first. On the Western Front, motor ambulances have already begun to dominate this stage, although horse-drawn ambulances remain in use on all fronts. From the regimental aid stations, the wounded are taken to casualty clearing stations located far behind the front lines. From there, hospital trains — and for the British soldiers, boats — carry the wounded to base hospitals en masse.

For injured Russian soldiers, this last stage often becomes the most gruesome. The Tsar’s railroads are creaking under the strain of total war, and his hospital trains often receive lower priority than the resupply and reinforcements going in the other direction. As a result, cars filled with wounded men may wait on rail sidings for days, often without proper care, food, or or nursing available. The Tsarina has opened the hospital in the imperial village to ease the overflow in St. Petersburg’s medical facilities, and even attends surgeries herself, but she cannot hope to save men who expire on the 800 mile journey to her care.

The average casualty transit time is 36 to 48 hours on the Western Front — far too long, by today’s standards — but it is even longer for Russians on the Eastern Front. And there are fewer people to help care for the wounded, as the Russian Army prefers to keep the Red Cross and other medical and sanitary aid organizations farther back from their front lines than either the western allies or the Central Powers. 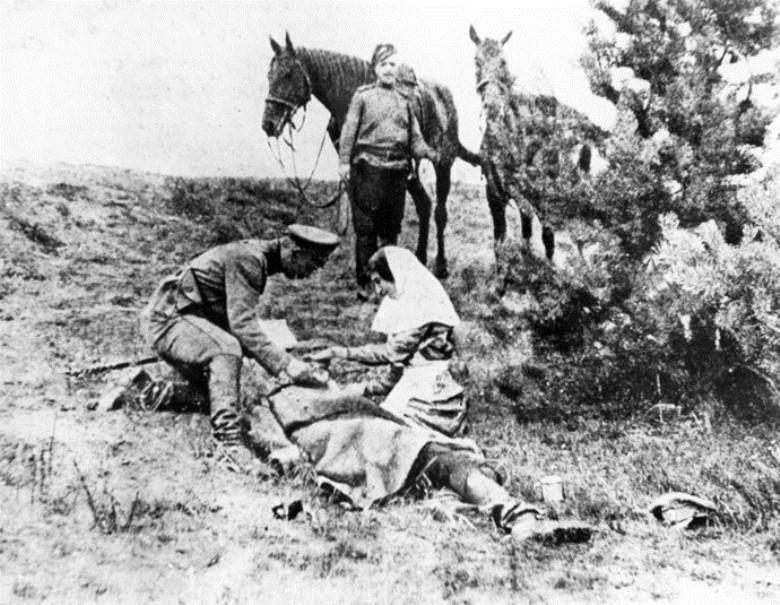 Even a rapid evacuation cannot stop the unseen threat of infection. Trench warfare is dirty, muddy, and usually infested with vermin; virtually every wound becomes infected in the very same moment that it is inflicted. The infamous manure-rich soil of Flanders causes gas gangrene in open wounds, and of course antibiotics are decades away from development. Yet there has already been progress against infection, for British and French medical personnel are now irrigating wounds with a solution devised by English chemist Henry Dakin using an apparatus designed by French surgeon Dr. Alexis Carrel — the so-called Carrel-Dakin method. When the war began, French surgeons amputated eighty percent of all wounded limbs; by the war’s end, that number will be reversed.

Germans invent a similar system for use by the Central Powers. In fact, there is a great deal of parallel development between the German Army’s independent medical service (Sanitätswesen) and the western allies as the combatants cope with the casualty rates of attrition warfare. By the end of the conflict, there are 314 medical companies (Sanitäts-Kompagnie), 72 military hospitals (Kriegslazaretten-Abteilungen), and hundreds of field hospitals operating in the Imperial German Army; altogether, they have treated 4.2 million casualties.

The war of attrition is changing medicine in ways that are still profoundly relevant for us today. The first blood banks, standardized equipment, and x-ray machines appear during this conflict; so do the disciplines of orthopedics, neurosurgery, and psychiatry. Poor Private Champromis died a terrible death, but every hospital in the world today is a functioning legacy of the Great War that killed him. 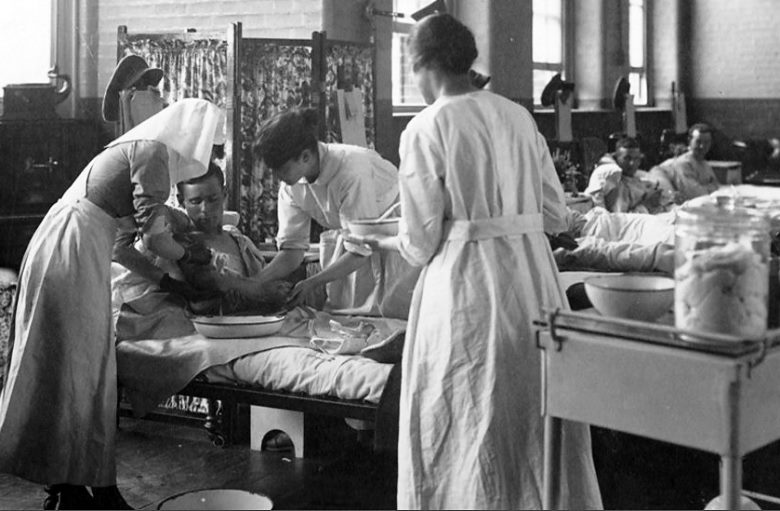 Nurses treat a wounded man at a British military hospital. Survival rates at this stage were excellent — the problem was getting here