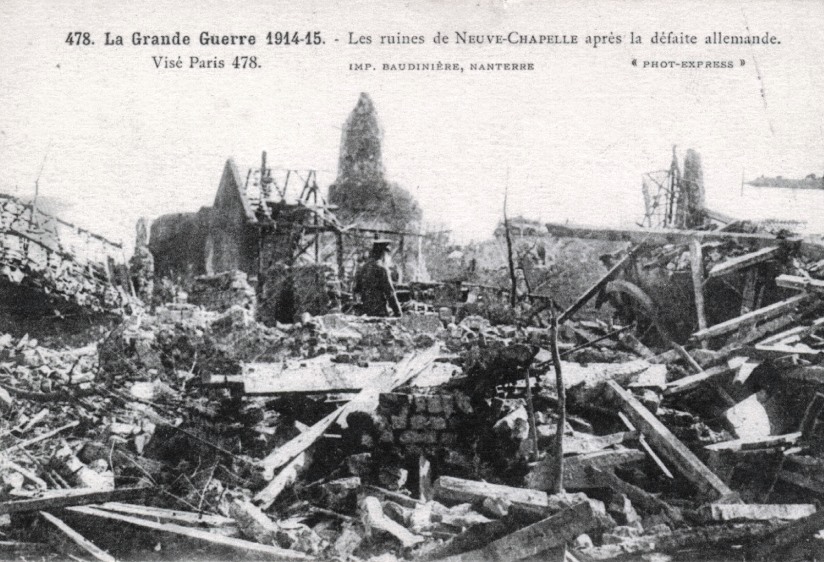 It is the third day of Britain’s first deliberate attack since the Western Front closed in October, and almost nothing has gone according to plan. Worried that the static nature of trench warfare is killing his troops’ morale, Field Marshall Sir John French has chosen a limited objective — the village of Neuve Chapelle in French Flanders — in hopes of at least threatening the German-held railways behind it, as well as Aubers Ridge, a height which allows German artillery spotters to dominate the battlefield. Having liberated about one square mile of French territory over two days, today his forces fend off a massive counterattack by twenty German battalions. 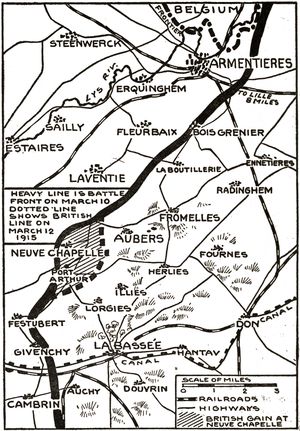 The operation began with much promise. After a thirty-five minute bombardment by 342 guns shattered the German front line and the barbed wire obstacles in no man’s land, 40,000 men of the Indian Expeditionary Force and the British IV Corps attacked along a front three kilometers wide, making good progress at first. But then the Garhwal Rifles veered off course in their assault, attacking an untouched section of the German line to the south and taking horrendous losses. Due to poor preparation, the massive bombardment also failed to damage the northern end of the line, so the 2nd Scottish Rifles had to force their way through intact barbed wire under murderous machine gun fire. Losing cohesion over the next few hours, the attack failed to reach Aubers Ridge or any of its secondary objectives, grinding to a halt by nightfall. The village and 1,700 German prisoners were in British hands, and the German response had been held back by a pre-planned screening barrage as well as aerial bombing, but the breakthrough could not be exploited.

There are many reasons for this failure, chief among them the limits of communication technology at the time. Telephone lines are supremely vulnerable to shellfire and the accidents of a chaotic battlefield, so upon taking their objectives, units are unable to communicate with commanders behind them in real-time. At his headquarters, Sir John French is completely cut off from the information necessary to send reserves forward and exploit success. Instead, local commanders send reinforcements against the centers of resistance they encounter, thus reinforcing failures at great cost. On the second day, attacks towards Aubers, the German position at Pietre, the bridges over Des Layes, and the Bois du Biez all failed for inadequate artillery support. A planned cavalry charge was canceled when the enemy position was found to be completely intact. Meanwhile, German reinforcements were streaming into the sector from multiple directions to launch counterattacks, so the troops dug in rather than advance. 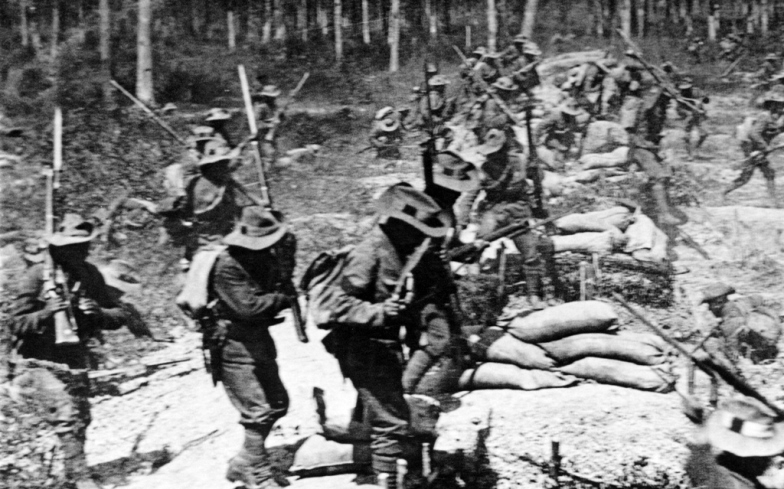 Men of the 2nd Gurkha Rifles training for the attack on Neuve Chapelle. Detailed planning and preparation were essential for success in breaking an enemy position, but they could not make up for the insufficient communications technology of 1915

Today’s fighting is brutal, but neither side is able to budge the other. Having achieved tactical surprise on the first day, allied troops no longer enjoy that advantage; the British 7th Division spends all day attacking at Pietre Mill, with the 20th Brigade taking objective after objective only to lose them to counterattacks against which they are unable to direct artillery support due to the communication gap. The Germans, who regard the British Army with contempt, find that their enemies have dug in deep and are not so very easy to break. This evening, French orders his subordinate commander General Douglas Haig to cease attacking and consolidate the ground he has gained. Seven thousand British soldiers and 4,200 Indian troops have been killed or wounded taking one small town in an area perhaps 10,000 feet wide and 6,000 feet deep, claiming perhaps as many German killed and wounded — a loss ratio that German generals find quite acceptable, given their much larger forces.

It is a taste of things to come. Difficulties exploiting the breakthrough, communicating with commanders, allocating reserves, and directing artillery fire will continue to plague British operations well into 1917. Convinced that their preliminary bombardment was insufficient, British generals will plan days-long preparatory fire campaigns that give their enemy plenty of warning and lose the element of surprise. But the biggest problem is that the supply of shells, especially high explosive rounds, is inadequate thanks to continuing production challenges. In just three days, Sir John French’s guns have shot off as much ammunition as the British Army used during the entire Second Boer War — the equivalent of 17 days’ worth of British manufacturing. No offensive can be sustained at such a high rate of depletion. 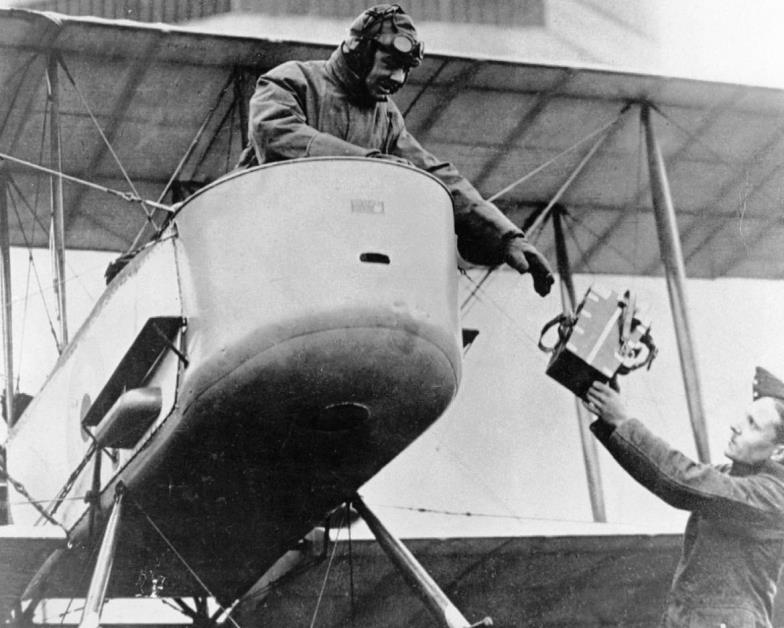 An observer prepares for his photographic reconnaissance flight in a Vickers biplane. British airmen mapped the battlefield in detail, achieved air supremacy on the first day, and corrected artillery fire by radio throughout the engagement

But the Battle of Neuve Chapelle does have a salubrious effect on Britain’s French allies. Supreme Commander Joseph Joffre has been worried about the British Army’s will to fight since the first battles of August, and although he sees the strategic failure of the battle, declaring “Mais ce fut un succès sans lendemain” (But it was a success which led to nothing), his opinion of British Army is improved by their willingness to face the bloody sacrifices of offensive operations. His officers begin coordinating with their British counterparts more closely afterwards, and the two commands are soon cooperating on joint endeavors.

The Germans also have a newfound respect for their enemy. Whereas they had expected the British Army to merely hold the line and free up French troops for offensive operations, placing fewer soldiers opposite British positions in order to maximize their manpower against the French, they must redistribute their forces now to meet the unexpected threat. 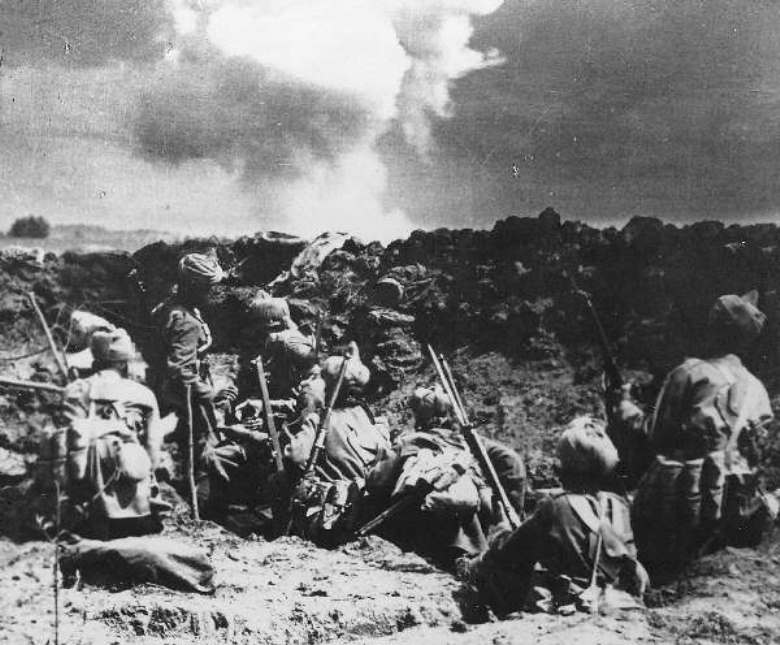 Indian troops of the Garhwal Brigade, Meerut Division watch the bombardment on the morning of the 10th before advancing