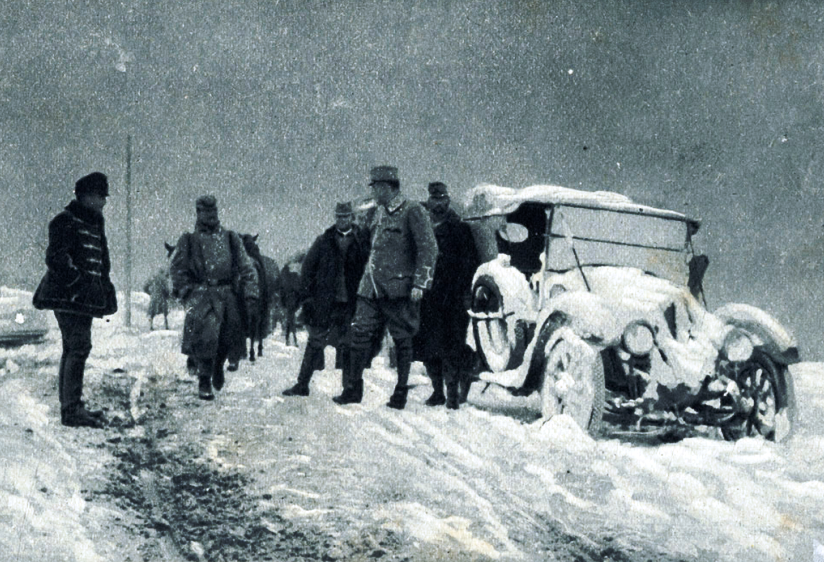 In his eighty-fifth year as a prince and his sixty-seventh year as Emperor of the Austrians and Hungarians, Franz Joseph seems very unworried about the apparent weakness of his military. The kaiserliche und königliche (‘Imperial and Royal’ – KUK) Army is currently wasting tens of thousands of lives attacking in the frostbitten hell of the Carpathian passes to intimidate the Romanians and Italians from joining his enemies, but Russian victories in these battles is instead convincing Italian Foreign Minister Sidney Sonnino of the Dual Monarchy’s vulnerability, leading him to make ultimatums regarding territorial concessions in the Alps. 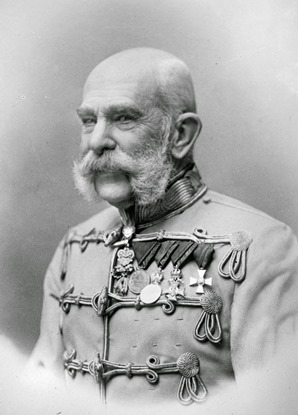 Today in council, Emperor Joseph accepts the idea of land transfers — in principle, at least — under Article VII of the Triple Alliance treaty with Germany and Italy. His acquiescence is not a sign of serious consideration, for Joseph is unwilling to surrender more than a few token acres to mollify his southern neighbors, who have their own imperial vision for the Balkans. Instead, the move is a delaying tactic inspired by German pressure. Wilhelm II is already diluting his own military strength to cover Austrian weakness on the Eastern Front and desperately wants to avoid the formation of a new, third front in the south that would drain away even more manpower.

But even fighting at a 3-2 disadvantage against the larger Russian Army, all is certainly not yet lost. Attacking towards Baligród today despite Winter weather (see above), the 4th Army of the KUK pins down a Russian force of equal size, while in Bukovina, at the extreme left wing of the Russian Army, the Austrians even enjoy limited local superiority. But these bloody attacks are uncoordinated, and while their commanders would rather delay operations during these days of subfreezing temperatures and blizzard conditions, Joseph’s supreme commander Generalfeldmarschall Conrad von Hötzendorf is unmoved by such niggling material limitations and accepts no excuses. The besieged fortress-city of Przemysl simply must be relieved, at any cost, for the sake of Hapsburg prestige.

The Great War began with a blow to Hapsburg pride, and the blows have kept coming in the form of battlefield defeats. The diverse peoples of the Hapsburgs’ empire are already required to bleed, freeze, burn, and starve in order to soothe the hurt for Joseph and his fellow aristocrats; now their lives are being thrown away to spare the monarchy further embarrassments, both diplomatic and military, but the sacrifice will be for naught.

The butchery and starving have just begun. 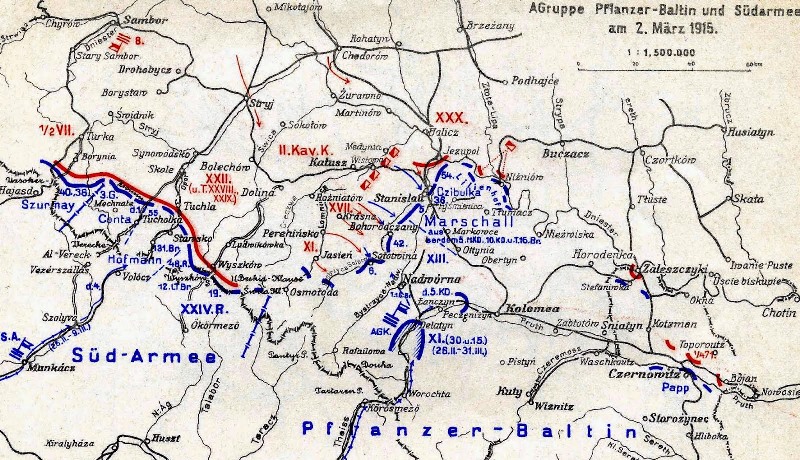 Four days ago Marquis Guglielmo Imperiali di Francavilla, Italy’s ambassador to London, secretly presented British Foreign Minister Sir Edward Grey with a memorandum describing the conditions and goals of a potential Italian intervention in the Great War. It will form the basis of negotiations leading to the Treaty of London in April, bringing a fourth member into the Triple Entente. Meanwhile, Italy continues an almost pro forma diplomatic process with Austria. This dual-track approach mirrors the prewar diplomacy of Austria’s Count Berchtold, who visibly exhausted all peaceful avenues for the sake of appearances while privately lobbying for an immediate attack on Serbia. Just as his efforts merely created a fateful delay which allowed the Tsar of Russia to grow bold and intervene, Italy’s simultaneous quest for diplomatic cover and preparations for war are creating an important gap in military operations. By the time Italy is ready for open conflict, the nature of the battle on the Eastern Front will have changed dramatically.

Prince Bernhard von Bülow, Germany’s special ambassador to Rome, has been hard at work trying to prevent catastrophe for months now. A former Chamberlain to the Kaiser, Bülow has the ear of former Liberal Prime Minister Giovanni Giolitti, and he is married to a prominent woman of Italian ancestry, but his charm offensive is still failing. The century-old dream of Italian reunification (Risorgimento) is close to fulfillment, with only the unredeemed lands (terre irredente) of the Italian-speaking Alpine regions left to ‘liberate’ from the ailing Austro-Hungarian Empire. Thanks in part to the efforts of warmongers like Benito Mussolini, the Italian people are growing more and more polarized, with a popular consensus in favor of war coalescing in the streets. 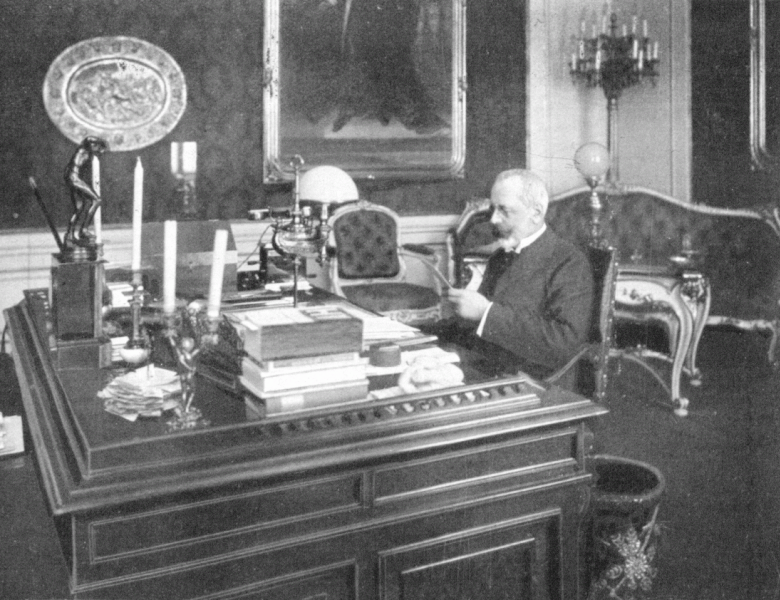 Whereas Britain and France are eager to offer Rome whatever bits of Austria-Hungary might strike their fancy, the man who succeeded Count Berchtold is adamantly opposed to any concessions of land, even at the price of war. Already instrumental in bringing the Ottoman Empire into the war, Stephan Burián will further antagonize his German allies by disputing the future of Poland and opposing unrestricted U-boat warfare. Burián is enlarging the conflict: his office has produced a proxy war in Kosovo, and his policy is wooing a receptive Bulgarian kingdom into the war. He opposes giving German General August von Mackensen too much part in any future operations against Serbia, holding out to build a clear Austrian victory; this annoys Hindenburg and Ludendorff, who resent Burián’s proposal for a peace process that gives up German gains in the west to advance both countries’ interests in the east.

Long before the Great War began, the Ottoman Empire was known as ‘the sick man of Europe’ for feeble government, embarrassed armies, and stultifying oppression; Russia, Britain, and France have begun to settle on a policy of euthanizing the ‘sick man,’ regarding him as a terminal patient too weak to endure. Like the Young Turks, the Hapsburgs are making an all-or-nothing gamble to avoid being carved up by neighboring empires — and aim to enlarge upon their victory.

The Dual Monarchy is as much of an anachronism as the emperor’s uniform. Austria-Hungary is too much of a confederation to fully unite, even in wartime: Burián’s appointment is a sop to the powerful Hungarian Prime Minister, Count Istvan Tisza de Boros-Jeno, who has closed his nation’s food markets to the rest of the ’empire.’ Practically the only completely-shared institution in the land is the army that the Emperor keeps throwing into the fire in a bid to keep his creaking empire alive.