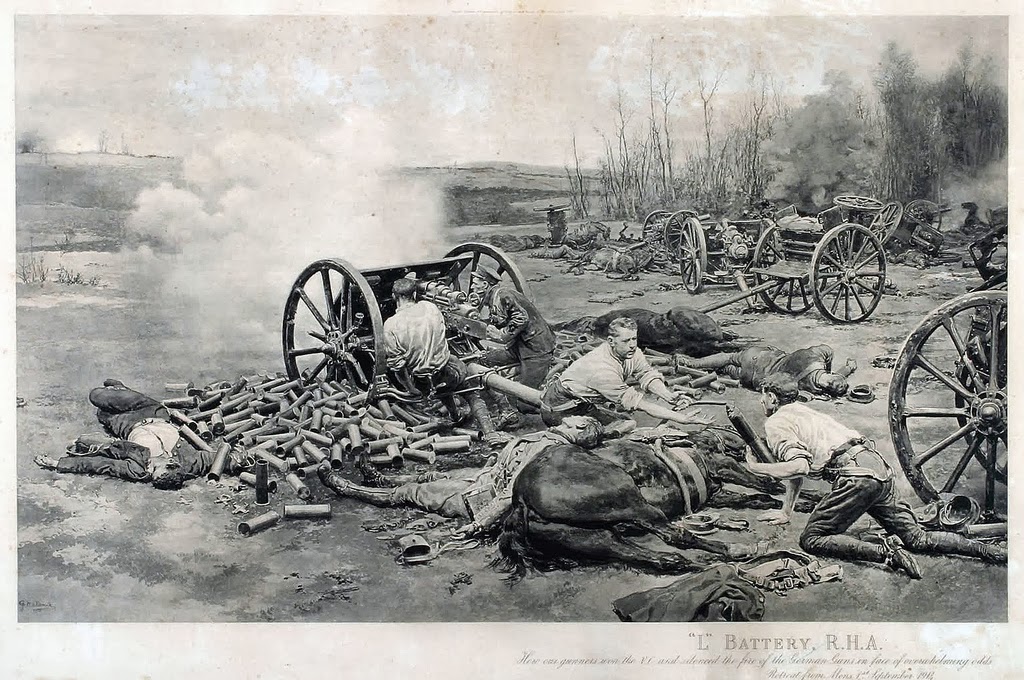 A sharp fight between two cavalry units, one British and one German, began this morning at Néry north of Paris. This skirmish creates one of the most enduring heroic images of the war when L Battery keeps its last gun firing against an entire German battery for two hours (see above). But in a telling sign of things to come that all combatants ignore, both sides do almost all their fighting dismounted.

Their horses are completely flagged from long weeks of daily marching at the limits of their endurance. In The Guns of August, Barbara Tuchman records one French eyewitness account of German infantry collapsing at their billets, unable to do more than gasp “forty kilometers!” before falling asleep. An infantry unit will outmarch a cavalry unit over three days, so we must imagine the horses — who need care, forage, and provender — are doing even worse. For example, horseshoe nails have worn loose, leaving hooves in need of care and attention that the armies’ marching pace makes impossible. Incredibly, there are no veterinarians riding in either army.

We tend to think of the armored knight’s joust as the definitive cavalryman’s role prior to this war, but in the vast sweep of history, the equestrian branch of arms has mostly been used to run down enemies on foot as they fled from battle. When this German attack fails, some mounted British dragoons do take prisoners, with the result that everyone learns the wrong lessons from this engagement. 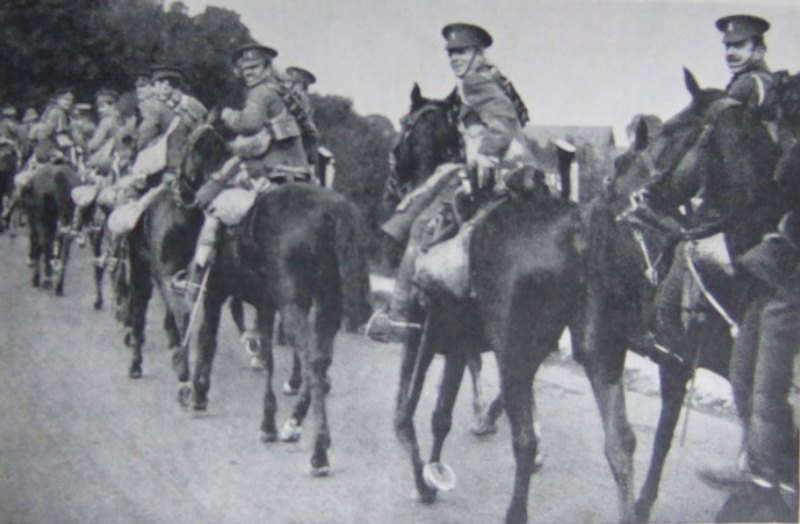 British dragoons in 1914. Note the swords hanging at their sides which are perfect for fighting at Waterloo

None of the combatants ever quite gives up on cavalry on the Western Front, and actions like Néry in these early weeks of the war are the reason why mounted divisions wait behind every trench offensive in hopes of exploiting a breakthrough that never comes. Already armed with rifles, many units do end up fighting dismounted as infantry, but they have other uses. Just as horses are used for crowd control today, cavalrymen are often given prisoner escort duties on the presumption that one horseman can control a hundred prisoners, which is why so many post-battle propaganda photographs from all combatants show cavalrymen with lances guarding their wards as they march to captivity.

Prodding disarmed men is practically the only useful role for the lance, a spear-like weapon that has stubbornly refused obsolescence for a half-century since the invention of smokeless gunpowder. Nevertheless, men will carry lances on horseback in European armies until 1940. Other technological innovations affect the role of cavalry in unexpected ways. For example, barbed wire has already come into widespread agricultural use before the war to protect fields from marauding livestock. Now those wire fences are halting charges — and all the combatants are making use of it for hasty defenses.

When the war of movement has settled into stalemate, the ‘No Man’s Land’ between the trenches will be thick with the cruel wire, providing some of the most gruesome images of the war. Charging on foot through such a landscape is impossible for a human and no easier for a horse. 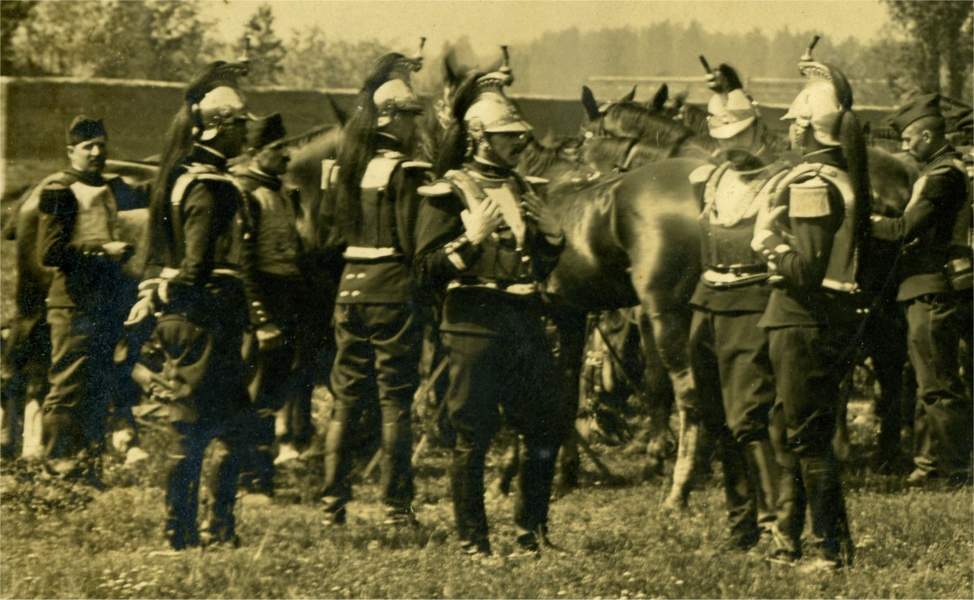 1914: French cuirassiers in the same style of armor their forefathers wore at Waterloo 99 years ago

Today marks the middle of a two-week allied retreat from the disastrous battles along the Sambre and Meuse rivers. Both sides are exhausted when the engagement ends; the British 1st Cavalry Brigade retires to resume the long retreat, while the German 4th Cavalry Division is left combat-ineffective and unable to pursue. The problem isn’t that too many men have been killed or wounded or captured; rather, it is clear that a unit of men on horses simply can no longer win the kind of fight for which their formations were designed.

Adaptation begins immediately as the bright, colorful piping disappears from uniforms. By the end of the war, brass helmets are replaced with steel and cloth caps have disappeared. Uniformity and utility replace pageantry as the desperate need for a breakthrough occupies all the combatants. A host of new technologies, such as gas masks for horses, are developed to keep the ‘prince of battle’ ready for its hour…which largely never comes. 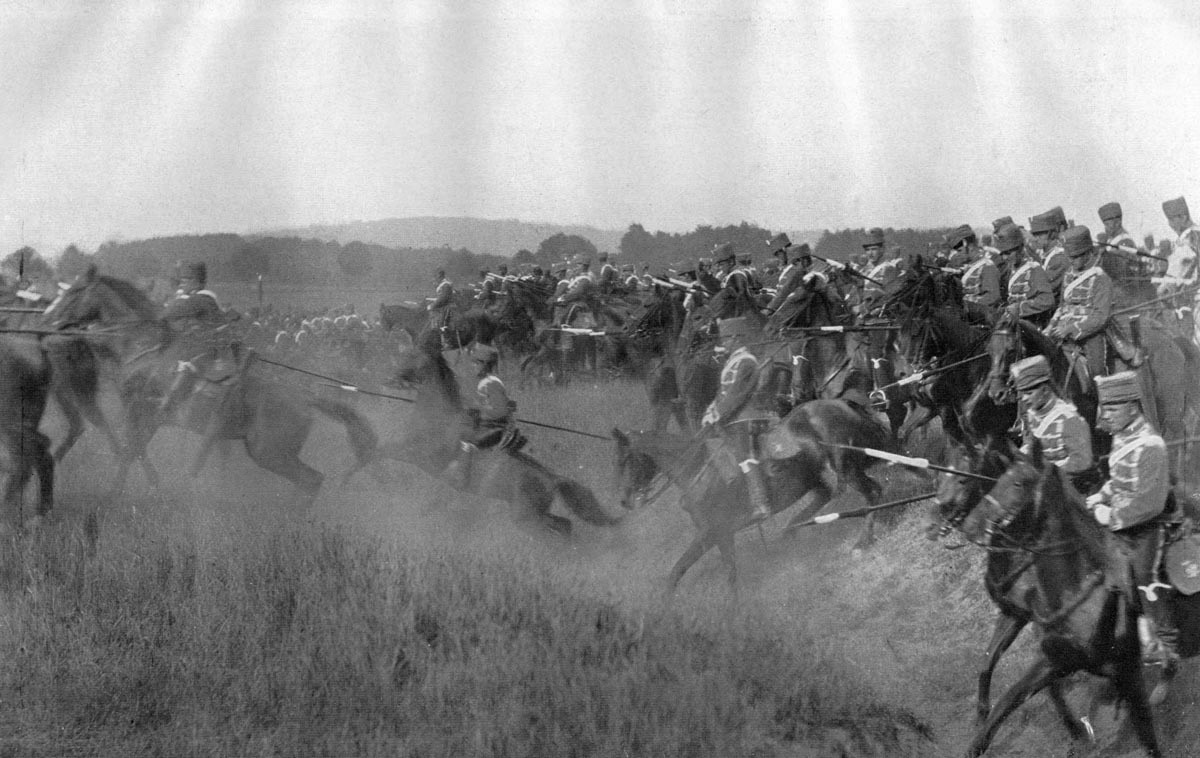 German hussars like those who attacked at Néry today. Note the parade-ready uniform that makes an excellent target for riflemen; such ornamentation was in fact a manly invitation to ‘take your best shot’

Having ostensibly won the skirmish at Néry, Britain eventually turns to technology in an effort to replicate the former shock-value of cavalry charges on the Western Front. Inspiration already exists in the armored car, a weapon system that Britain is presently using in her colonies with great success. In these same early weeks, Belgian armored cars also meet with success, suggesting an idea: replace tires with continuous tracks like those already invented for agriculture, and use the armored crawlers to cross ground where men and horses would get hung up and die.

For Germany, which designs but hardly deploys its own ‘tank,’ the problem soon becomes an acute shortage of horses. Every division, infantry or cavalry, is supposed to have five thousand horses in its complement. As they die on shattered fields and from the stress of overloaded, inhumane timetables, every German division is already running short on horses. The British blockade will make it impossible for the Kaiser to replenish his herds from the Americas, where Britain and France will provide a brisk business for ranchers. The resulting demand for new horseflesh means the German government must requisition them from its farms, adding to productivity woes in an under-industrialized agricultural sector, leading in turn to hunger.

Man and horse have fought and died together for 4,000 years; one little firefight just cannot overturn that much tradition all by itself. The European military climate is not afraid to adapt, but change is always hard. Not only is monarchy greatly reduced in Europe after this war, so is the equestrian class divide within its military cultures. As the noble steed passes out of use, nobility goes out of style.

The Belgian Minerva armored car helped point the way towards tank development by defending Antwerp. Note the squad’s bicycles mounted on the rear and the captured German pickelhaube helmet