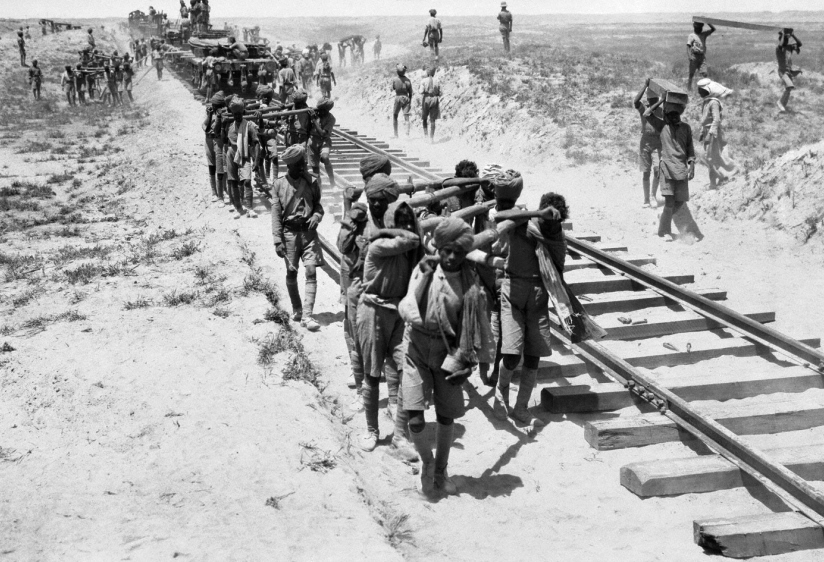 At the farthest eastern edge of Ottoman dominion lies the ancient, proud nation of Persia (modern-day Iran), now sadly divided into competing spheres of influence among three empires. Britain has encroached on anemic Turkish authority in the Persian Gulf for decades, but particularly in the six years since the Anglo-Persian Oil Company began pumping black gold out of wells in Iran’s border regions. Russia’s sphere of influence in northern Persia has already been threatened in January, when the withdrawal of troops from Tabriz — a move calculated to defeat the Turkish threat at Sarikamish in Asia Minor — left the Persian city open to a small Turkish army which had to be routed out at the beginning of February.

During the Great War, the Persian theatre is seen as mere sideshow in Britain — secondary even to the adjacent Mesopotamian theatre, where British troops have advanced out of Basra and now threaten Baghdad. As seen above, the existing railways are inadequate to support a large occupying force in what will become the capital of modern-day Iraq, for they only go as far as the edge of the southern marshes. To take and hold the center of the Tigris and Euphrates Valley, the British Empire must expend considerable time and effort extending its logistical reach.

In the meantime, German and Ottoman agents are giving them plenty of work to do. 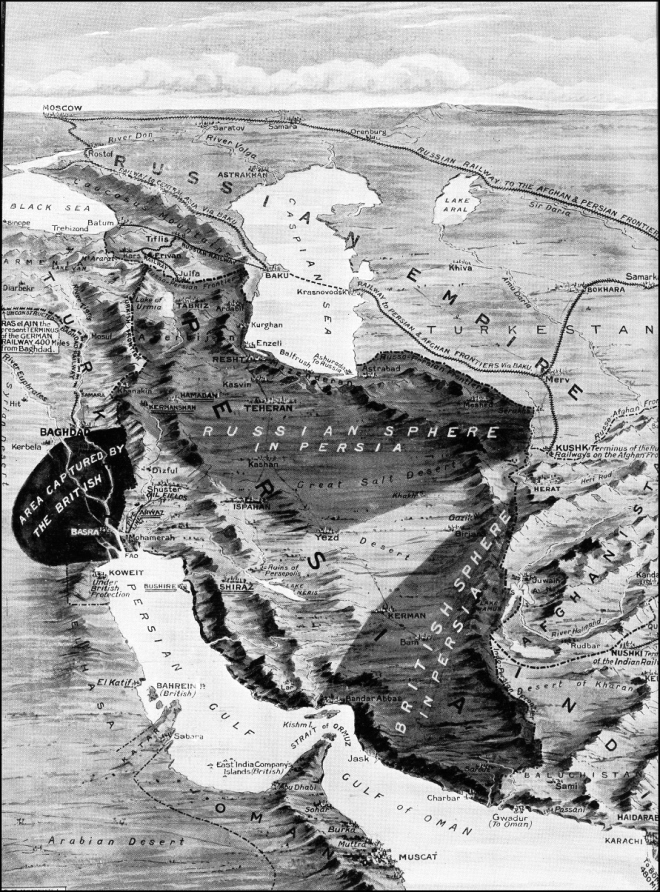 The Peril of Persia in The World War (from The Graphic, November 20, 1915) — once the scene of Russia and Britain’s ‘Great Game’ in South Asia, Persia was dismissed as a mere sideshow during the Great War

The Central Powers have clear strategic goals in Persia. By inciting resistance to the Russian and British empires, they hope to threaten the Tsar’s oilfields at Baku and the Anglo-Persian facilities which supply a growing fraction of Britain’s Indian Ocean naval strength with fuel oil. By sponsoring a series of uprisings in South Asia, the Kaiser aims to upset the British Empire’s control of India. The officially-neutral buffer states of Persia and Afghanistan are therefore becoming scenes of intrigue and adventure worthy of an ‘Indiana Jones’ movie.

Wilhelm Wassmuss, better known as Wassmuss of Persia, is fast becoming a real nuisance. Ever since he dropped his diplomatic cover, adopted native garb, and began pressing gold in the palms of tribesmen, the restive Arabs of southwestern Iran and southern Iraq have become a threat to the wellheads near Shustar as well as the pipeline to Abadan. Early this morning, Brigadier General C.T. Robinson leads a force of barely 1,000 Indian troops, thirty white officers and enlisted men, two field guns, and two mountain guns from the town of Ahwaz to attack a force eight times their size at Ghadir.

Robinson expects his artillery to scatter the enemy quickly when he opens fire after dawn. Indeed, his tactics speak to inexperience, for the General has been on the frontier since the war began. He has not been to the Western Front, nor has he been updated on the details of the near-destruction of Lt. Col. René Laverdure’s command while undertaking a similar offensive in Morocco nearly four months ago. Trusting far too much in his superior weapons, Gen. Robinson is dismayed when the Arabs swarm from their camp and quickly begin to surround him. 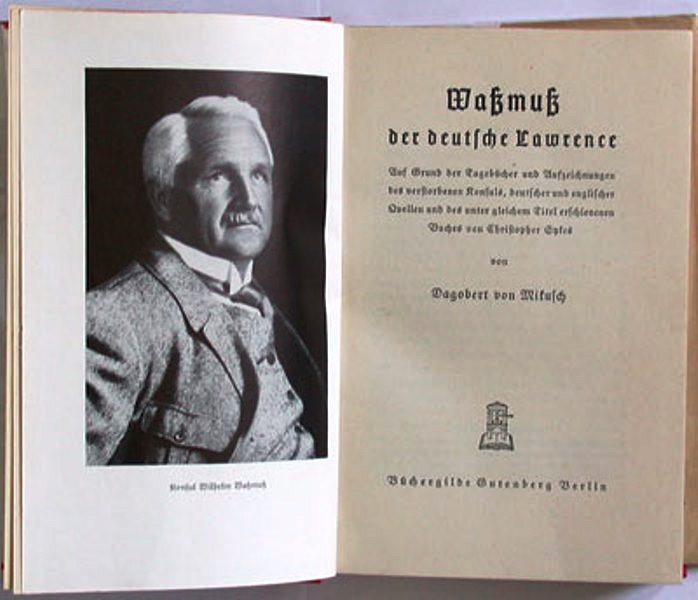 Unexpectedly forced to make a fighting withdrawal, both field guns are soon lost, with one even turned around and used against Robinson’s men, though thankfully to little effect. Just like the insurgents of Oman who rose against the British-backed sultan in January, these tribesmen are also equipped with modern rifles, but lack any consistent training, so their fire is wildly inaccurate. Under fire, drivers abandon the expedition’s baggage carts, but this actually delays the Arab pursuit as the swarm stops to loot them. Luckily, Robinson’s cavalry units tirelessly outflank and force the enemy back again and again throughout the day, preventing total disaster.

Halfway back to Ahwaz, Robinson encounters Arabs waiting for him on a ridge; still in command of a column moving in good order, he orders his cavalry to sweep behind the ridge while his men charge uphill with bayonets. The insurgents vanish, leaving Robinson free to order his reserves forward and limp home with 62 men killed and 127 wounded. As many as a thousand Arabs have been killed or wounded.

Characterized by small forces and the inattention of the British public, the Persian sideshow is nonetheless a perfectly modern theatre of war. Though these battles are hardly even remarked upon in the Western press, British victory in Persia will play a key role in our violent century of oil, religion, and politics.