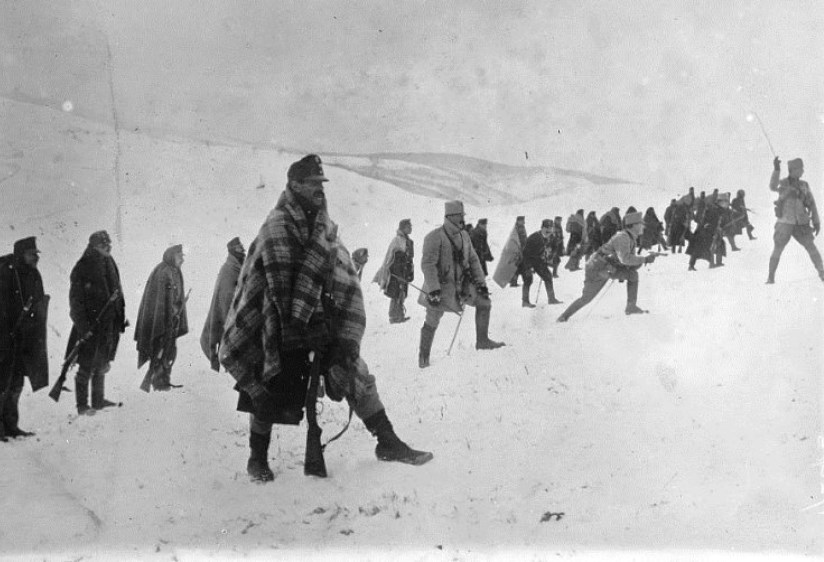 In mountain warfare, the greatest moment of danger does not come at the top of the pass, but while descending from its heights while the defender is able to attack from three sides. The Carpathian range has proven to be a formidable barrier to both the Russians, who have been unable to force their way down the passes into Hungary, and for the Austrian armies which have been trying to fight their way through and relieve Przemysl since January.

Today, the second of three Austrian Winter offensives is sputtering to a frozen, bloody halt. In his war diary, Colonel Veith of Third Army writes: “Fog and heavy snow falls, we have lost all sense of direction; entire regiments are getting lost, resulting in catastrophic losses.” In the last two days, Habsburg archduke Joseph August, the commander of VII Corps, has watched as his crack Honvéd Division “suffered terrible losses; its effective force numbers less than 2,000…and tomorrow, despite the casualties, we have to attack again. My corps losses since 1 March: 12 officers, 1,121 men killed, 46 officers and 2,121 men wounded, 2 officers and 685 men missing. This is really terrible.”

Weather has been the most prolific killer in the Carpathians. When cold rain isn’t turning the region’s few roads into impassable muck, heavy snowfall is driving men from the heights and burying the frozen tracks which they depend on for food, fuel, and ammunition, draining their strength as they are forced to dig themselves out. Lightly-wounded men are forced to creep slowly over treacherous ground; badly wounded men usually freeze to death — or worse, can be heard screaming in the night as they are discovered and eaten by ‘wolves’ (actually feral dogs). During the Winter of 1914-1915, the Carpathians are easily the most haunted sector of any front. 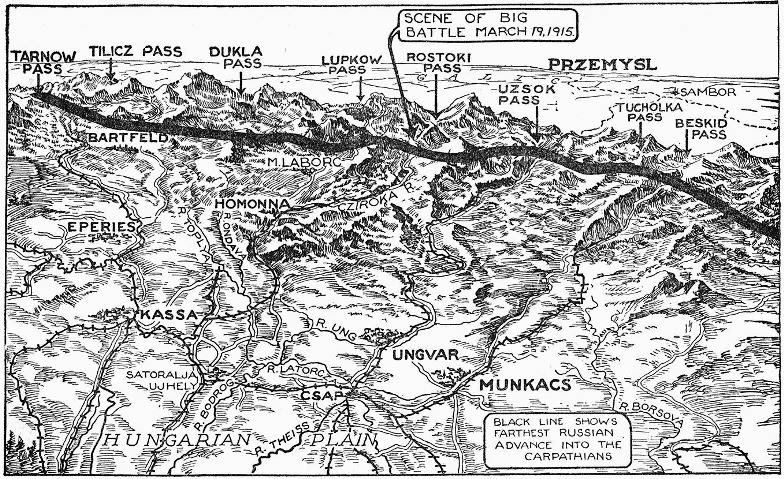 A view of the Carpathian front from Hungary. Note the railroads running through the valleys and climbing the passes

It is also the sector which best resembles our latter-day stereotype of incompetent, distant commanders sending men to their deaths with inhuman detachment.

Soldiers are force-marched through the slush wearing boots with cardboard soles; there is no Winter clothing available; respiratory diseases burn through the ranks; tens of thousands of horses die delivering food that arrives completely frozen; deployed in the open without shelter, troops succumb to frostbite and freeze to death in the howling winds. Forced to choose between a sentence of death for desertion, or death at the enemy’s hands, some men deliberately expose themselves to Russian fire. Thousands more attempt to shirk battle in the miserable conditions by wounding themselves.

Artillery support is much more difficult in mountainous terrain. To find level ground, guns must generally be sited in valleys, where they face ballistic challenges trying to reach enemy positions on the far side of a slope. Devastated by losses in Galicia, the Austrian artillery officer corps is so deficient at these challenges as to be nearly useless. Infantry attacks are launched without coordination, decimating units that must fight with unsupported flanks and bleeding away their defensive strength. Russian officers soon detect an unchanging rhythm to their enemy’s assaults and counterattack at the moments when Austrian units are weakest. The malaise even strikes commanders, who ignore direct orders to cooperate with one another.

Generalfeldmarschall Conrad von Hötzendorf accepts no excuses for failure, and never addresses these problems — he merely orders his armies to attack, attack, attack. Once so overconfident that he regularly proposed aggressive wars against Serbia and Italy, now Conrad remains blissfully immune to the realities of the war far from his headquarters. By draining his country’s strength away for no gain, Conrad leaves Austria ever-more dependent on their German allies. 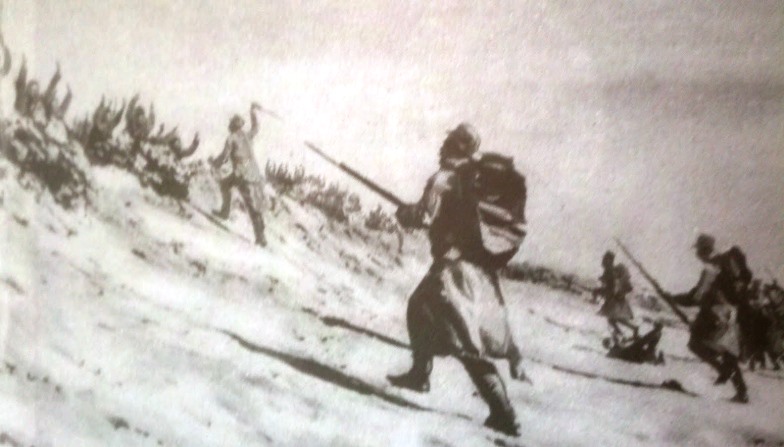 Pure propaganda: this art has been created for public consumption well away from any actual fighting. Note the big, heavy packs these men are supposedly asked to carry in an uphill ‘charge’ against disarmed men behind a sword-waving officer

But the biggest mistake the Hapsburgs make is their failure to create a reserve army. The Dual Monarchy is in fact the only major power in the Great War that does not have one, and fails to even propose putting one together until it is far too late. New companies are inducted and trained at a regimental barracks by home companies; once dispatched to the front, these new companies are expected to serve on the front lines until killed, wounded, or captured. There is no relief, no R&R, no regular rotation out of the battle. By contrast, Russian units are regularly taken out of the front lines to recuperate and restore their strength, maintaining a critical edge in morale.

Yet the Carpathian front is also becoming a huge drain on Russian resources. Despite having the world’s largest land army, shortages of reinforcements are leading to Austrian successes further south in Bokovina, while shortages of artillery ammunition and rifles are forcing generals in Poland to resort to human wave attacks with bayonets in hand. In trying to force the passes and threaten Hungary, the Stavka (General Staff) positions an ever-increasing number of troops in a region of severely limited mobility. Three Austrian offensives will fail to dislodge them, but they will also leave Russian Poland open to attack from the south. 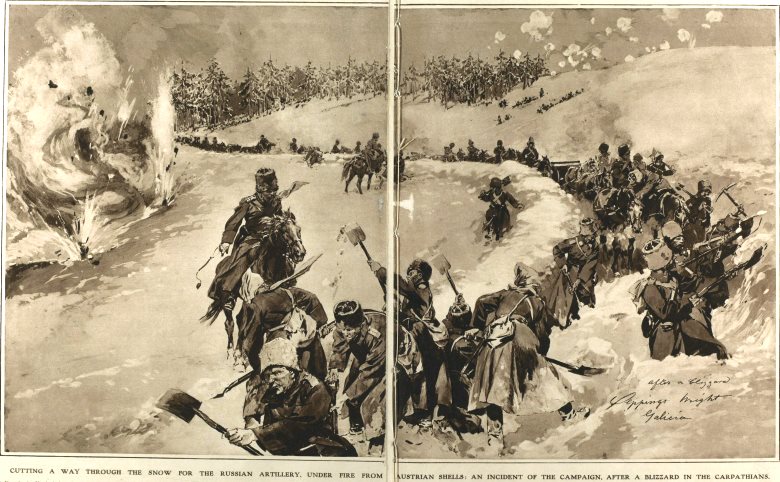