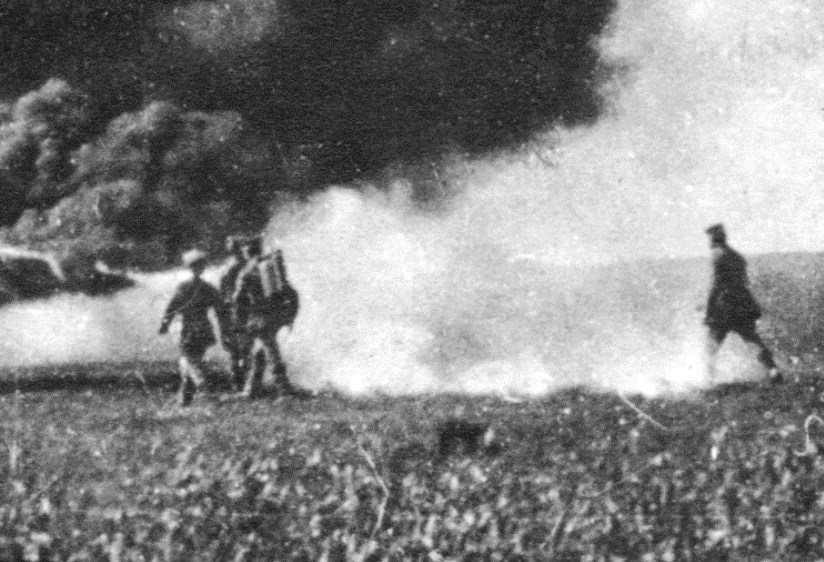 Fire is a constant handmaiden to war. Fire lets man cook food, which produces large human populations to predate on one another’s resources and territory. Fire gives man hardened spearpoints, a means to signal great distances, warmth against the watch, a way to burn out enemies, and eases the disposal of corpses. Without fire, there would be no chemical sciences or combustion-driven war machines. Like the wheel, fire is a background technology in almost any war narrative — a thing we see and read about without remarking on its presence, for we intuitively understand it belongs there.

Germany’s Flammenwerfer program began in 1901, when an engineer named Richard Fiedler first approached the Imperial German Army with his invention. In 1908, an experimental Engineer Test Company put his first models though their paces. Although the results were satisfactory, the Army did not seriously regard flamethrowers as front-line weapons until trench warfare set in during the last two months of 1914. In January, the first section of 48 pioneers were assigned to drill with both available Fiedler models under Captain Hermann Redemann, a former firefighter from Leipzig, to develop tactics for trench fighting. His first student class passes their trial by fire today at the Bois de Malancourt, a northern point on the Verdun perimeter.

Unlike both France and Britain, which will develop their own flamethrower systems in the course of the war, Germany puts its flamethrower teams into the ‘first wave’ of their attacks — and calls them ‘storm troopers’ to reflect their elite status. On the 28th of July, 1916, the Kaiser even authorizes the Guard Reserve Pioneer Regiment to wear the coveted Prussian ‘Death’s Head’ on their sleeves. 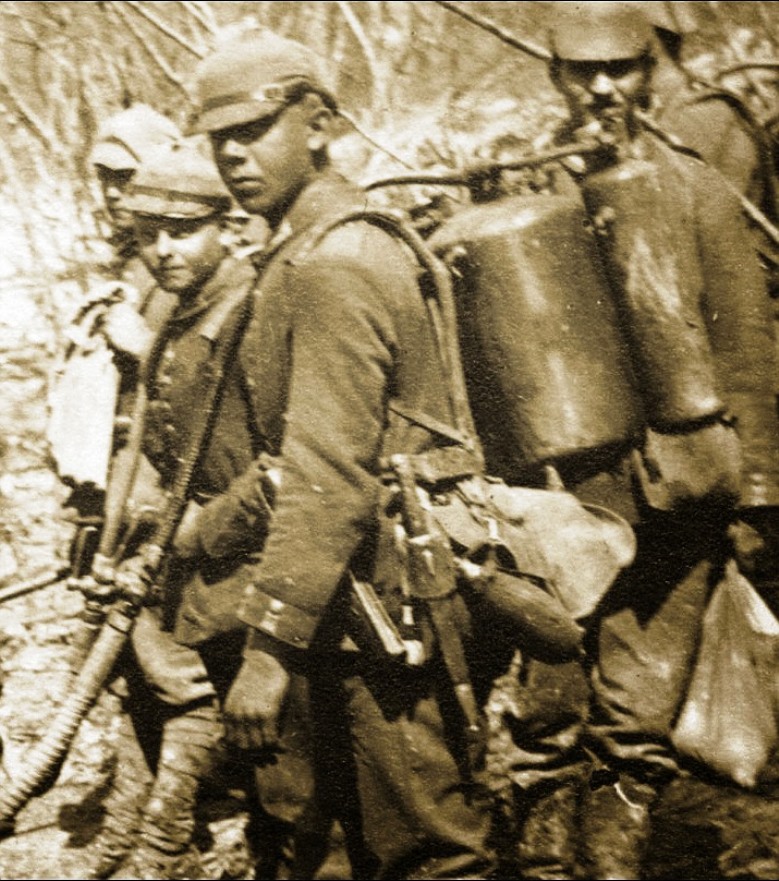 A heartbreakingly-young flamethrower team on the Italian front near Isonzo during the Summer of 1916. Contrary to popular myth, these weapons did not spontaneously explode when hit by bullets and their crews usually were not killed upon capture

Like machine guns or artillery, the man-portable Kleinflammenwerfer (‘kleif,’ for short) is a crew-served weapon. Today’s teams consist of five men armed with pistols — a team leader, an operator, and two men tasked to carry and throw grenades while the assistant operator lights the flame and turns the valves. The lance tube has two small openings, one for heavy oil and another for gas propellant; the tanks carry about ten minutes’ worth of fuel.

Today’s tactical success convinces the German high command to expand their pioneer battalion to 800 men, putting them to use during the Second Battle of Ypres in July. Both France and Britain react to the appearance of flamethrowers on the battlefield with outrage, of course, but they soon turn to developing their own flame weapons with varying degrees of success. In June of 1916, the French Army will field 1,400 Schilt flamethrowers, Model No. 3, which uses mixed gasoline and naptha, but the French Army only deploys them in the second and third waves of an attack.

Like France, the British Army never appreciates the full potential of flamethrowers. Britain sends Z Company, Special Brigade to France in July 1916 armed with the Hall Projector, a doughnut-shaped tank with a 4-gallon fuel load and a range of about ninety feet, but London will largely eschew man-portable models for static machines like the Livens Large Gallery Flame Projector, a 56-foot long, 2.5 ton monster used during the Battle of the Somme. 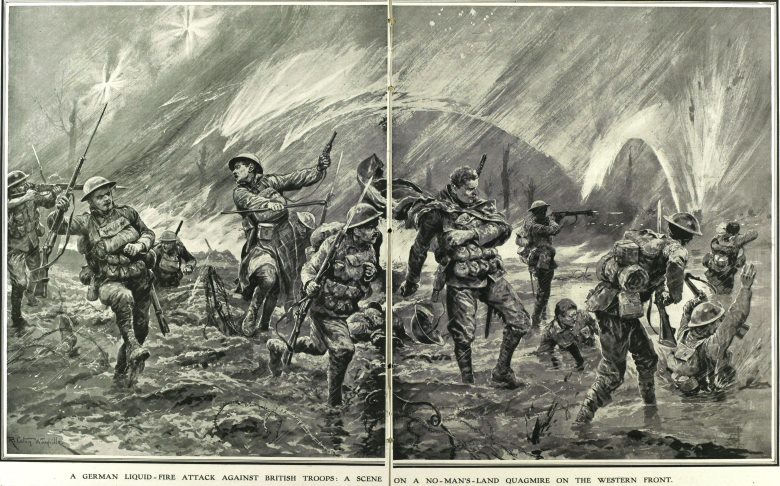 Germany will continue to train thousands of flamethrower crews during the war, expanding their teams to include as many as seven men. Austrians build their own copies of the 1915 German system to deploy in Galicia, the Balkans, and their alpine battles against Italy, which soon borrows and manufactures the French Schilt No. 3 design in response. While both sides use flamethrowers on every European front, the story is more one-sided on the Eastern Front: although Russian armorers surely understand the scientific principles involved in constructing Flammenwerfers, they prove to be just one more mass production-item — like gas masks or artillery shells — that Russian industries simply cannot provide in sufficient quantity due to shortages of skilled labor and raw materials.

Now absent from the modern battlefield, the flamethrower is an iconic weapon in both world wars, but it performs particularly well in trench combat. Encountering a sharp bend in the trench meant to limit attackers, a Kleif operator can send his fire over the top — or even bounce it off the trench wall — to force defenders to retreat. Postwar estimates show that more than four out of five German flamethrower assaults has succeeded, suggesting that the German Army’s only fault is in not producing enough of these weapons. 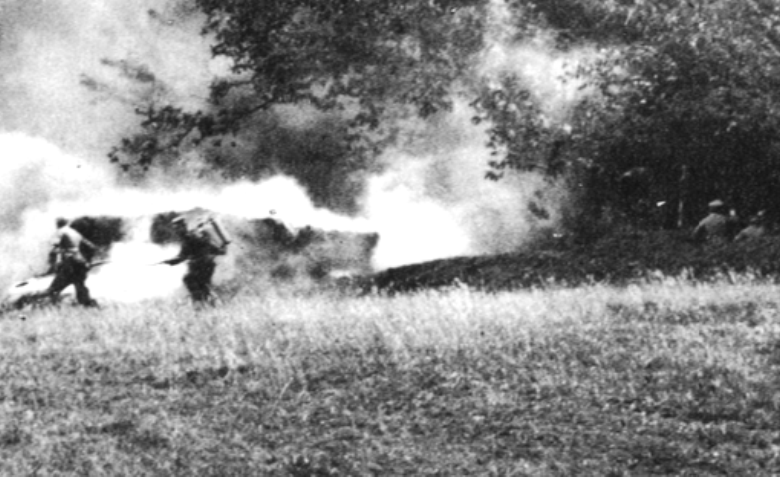 A ‘Kleif squad’ spearheads an assault on a hard point in British defenses ca. July, 1915