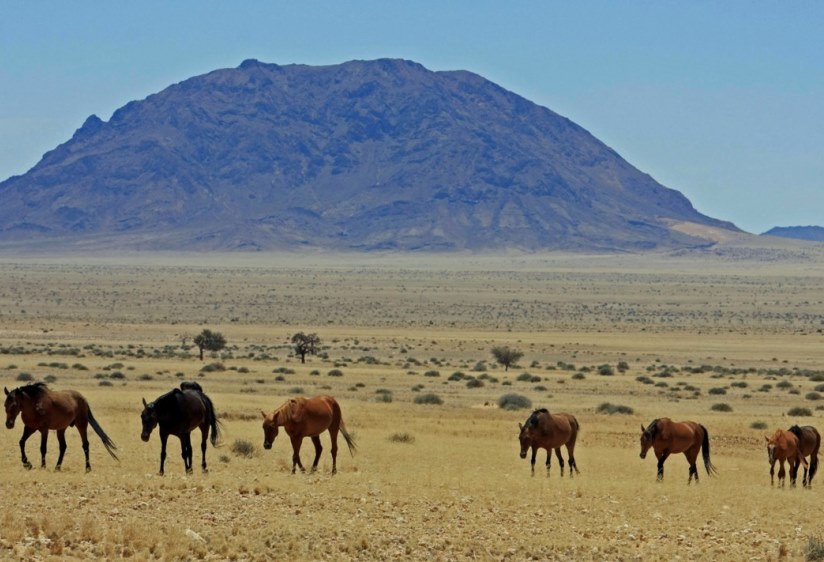 Laid in 1873, South Africa’s first railroad tracks were three and a half feet apart. Anticipating a possible future rail connection with their neighbor, the Kaiser’s engineers chose the same ‘narrow gauge’ of forty-two inches when they began laying track in 1894. That link has finally come to pass, but not as a friendly economic tie. Instead, soldiers and hired laborers of the Union of South Africa are laying ‘Cape Gauge’ railroad tracks to support Prime Minister Louis Botha’s methodical, meticulously-planned invasion of German Southwest Africa (Namibia).

Today, Union cavalry troops move into Garub, a watering hole about halfway along the central rail line between the coastal city of Swakopmund and the interior capital at Windhoek. Much of this railway was torn up by the defenders, but Botha’s efficient organization and planning have already restored the damage in just a few weeks. Garub itself is little more than a borehole that provides a watering station for steam locomotives, but the position is strategically important enough that ten thousand men and six thousand horses will be deployed through here by mid-March.

Intended as a mere preliminary move for operations in March, when 60,000 South African troops will attack the country in force, today’s event will nevertheless leave a lasting biological legacy. On March 27th, Austro-Hungarian pilot Paul Fiedler buzzes the Garub camp in his Roland Biplane, dropping a few small hand-bombs to scatter a grazing herd. By the end of the Great War, a small population of feral horses has established a permanent home here in the scrub and desert. Seen above, as many as two hundred animals still run free today; they are the only wild herd of horses in all of Africa. 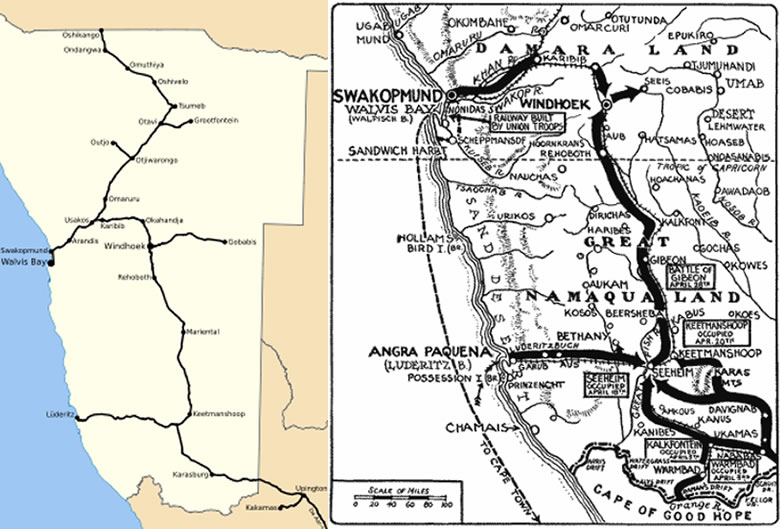 A modern war in Africa 100 years ago? Left: a map of the modern Namibian rail system. Right: a campaign map of central and southern Namibia shows that most of the maneuvering and fighting of 1915 took place along the rail lines and associated roads

With its still-unfenced deserts, Southwest Africa is a much better environment for cavalry action than Europe. But even with the severe decline of the cavalry branch due to the machine guns and barbed wire that are characteristic of trench warfare, horsepower is still an important strategic consideration in 1915, for horses pull most of the artillery, supply carts, and field kitchens for all the European combatants. And whereas France and Britain can replenish their livestock from the Americas, the German government is eventually forced to requisition horses from the country’s farms, worsening the agricultural productivity shortfalls that will lead to hunger, famine — and eventual defeat.

The war in Africa is not taking place in a technological backwater. Aus, which is currently the center of Germany’s colonial defenses, has a radio transmitter capable of reaching Berlin, an airbase, machine guns, field artillery, and other modern conveniences of war. Though they lack factories to resupply ammunition and cannot receive reinforcements from home, the Schutztruppen are a proud modern force in 1915; so is the Army of the South African Union, which seized Swakopmund in January and Lüderitz Bay in September to cut their enemies off from logistical support.

A desert blockhouse in Southwest Africa. Note the use of barbed wire to deter infantry assault — just like on the Western Front

Indeed, Botha’s combined arms approach receives praise from students of military history even today. New and old service branches look after one another instead of competing for attention or resources; horsemen secure the railways so that trains can deliver fresh horses and provender; armored cars use the supporting road infrastructure to spoil raids and prevent sabotage, while slower motorized support columns depend on cavalry protection. Horse, car, and train all support the infantry, which does the vital work of repairing and improving and guarding the water and rail infrastructure to support their invasion.

Within two weeks, Garub has become the main launching point for Botha’s northern forces to attack Aus, whose defenders retreat in the face of the overwhelming force they were powerless to prevent from gathering here. Their radio transmitter goes silent two days before the final push on March 30th, which finds the town and its wells abandoned. Poisoned or damaged water sources are quickly replaced or repaired, enabling the large force to make rapid progress against the demoralized defense. As the main body of Botha’s army marches from south to north during April, German colonial troops are unable to halt their progress for more than a day’s battle. The wild horses of Garub are a fitting legacy for a successful campaign of maneuver. 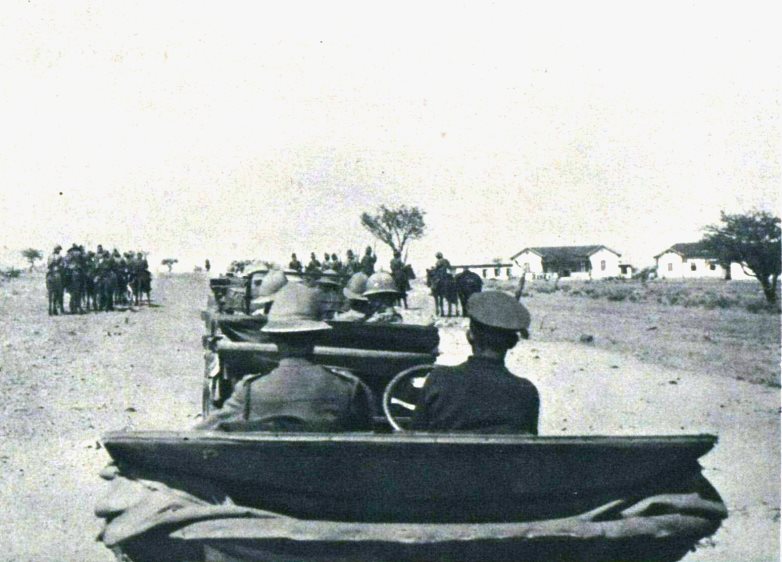 A motorized column waits for the surrender of Windhoek before they proceed. Note the ‘flying columns’ of cavalry on either flank