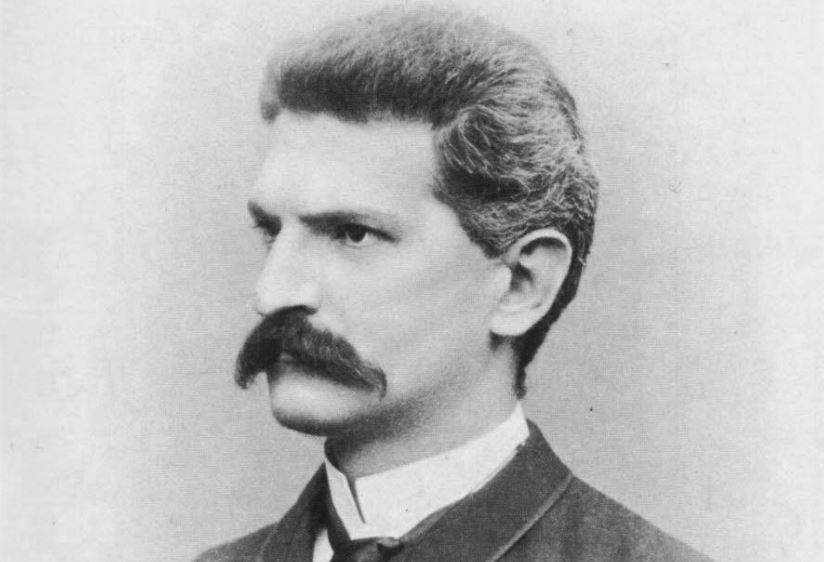 Until recently, Sidney Sonnino favored maintaining Italy’s neutrality in the Great War. All other things being equal, the man Prime Minister Antonio Salandra appointed as Foreign Minister in December (see above) was more apt to reinstate Italy’s prewar alliance with Austria and Germany, declaring war on France and Britain, than turn against former allies. But Austrian ambitions in the Balkans threaten Italian ambitions in the Balkans, and Vienna is unwilling to discuss giving up any of its Italian-speaking territories in exchange for Italian patience. Born of Hapsburg pride and Roman scheming, this diplomatic crisis is leading straight to war.

Today, Sonnino forbids the Austrians from any further military operations in the Balkans until there is an agreement on ‘compensations’ for continued Italian neutrality. He does not inform his interlocutors that he has already sent a courier to London five days ago to find out what sort of deal France, Russia, and Britain are willing to offer for Italian belligerence against the Central Powers.

Though Kaiser Franz Joseph is already aware of this development, his pride still forbids any land swap in accordance with Article VII of the treaty. Instead, he makes a play for time. On March 9th, ambassador Baron Karl von Macchio agrees in principle to Sonnino’s demand. The decision not to attack Serbia is easy enough to make right now: not only has the Dual Monarchy suffered three crippling defeats in its previous invasions, but the land is now burning with Typhus, and today Austrian divisions are bleeding in the snow and ice of the Carpathian passes in a seemingly-vain effort to stop the Russian ‘steamroller.’

In part, the Hapsburgs launched their current counteroffensive to intimidate Italy, but upon seeing the Austrians crushed in the passes of Dukla, Wyzskow, and Lupkow during these weeks, the Italian government becomes even more confident that their army can turn the tide of war decisively. Yet by the time Italy formally renounces their old treaty and declares war on Vienna, the Austrians’ lowest ebb has already passed, Russia is in retreat, and Rome has missed their moment of opportunity. 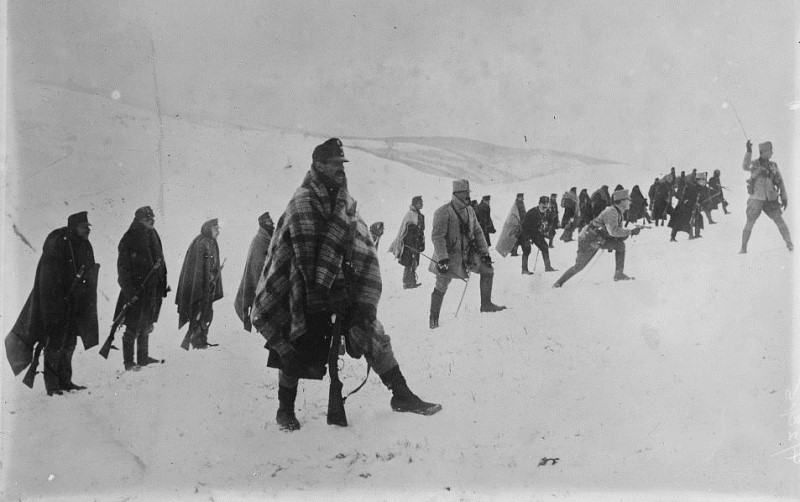 Austrian soldiers prepare to charge a Russian position in the Carpathians, December 1914. Note the blankets and officers’ swords

Italy’s official demands, delivered on April 8th, call for the surrender of Trentino, Rovereto, Trent, and Bozen; the extension of the Italian borders around Tolmino, Goriza, Gradisca, and Montelfalcone along the Isonzo River, and a quitclaim for the Aegean islands on the Dalmation coast. Trieste is also to become an autonomous free city, and Austria must let Italy have its way in Albania. In rejecting almost every point, Emperor Joseph refuses to surrender anything like what Britain, France, and Russia can promise Italy for joining their alliance, and moreover he would delay any such transaction until the war is finished. Germany tries to backstop the process by offering to ensure Austrian territorial concessions upon the end of the conflict, but these promises ring hollow in Rome.

As reported by Italian anti-fascist writer and historian Gaetano Salvemini, Sonnino’s negotiations with the allies seem like a case of sheer expansionary avarice.

Sonnino demanded, as his price for intervention, that the Triple Entente guarantee him, at the expense of Austria: the Italian Trentino, the German Upper Adige, Venezia Giulia as far as Longatico, in one direction, and as far as the boundaries of Fiume in the other; Dalmatia as far as the Narenta; and virtually all the islands of the Adriatic.

It was the scheme imported into Italy by the agents of the shipping interests in Trieste around mid-September, 1914, just after the Battle of the Marne; and it had been blindly adopted by our Nationalist Party and by the General Staff of the Italian Navy. Of the Navy and not of the Army! (Chief of Staff Luigi) Cadorna was opposed to any annexations by Italy on the Dalmatian mainland. Sonnino, however, never consulted Cadorna on this subject. Nor did he consult the Italian Legation at Belgrade as to the effect such stipulations might have in Serbia. The negotiations expounded in the “Green Book” would convince our neutralists that war could not possibly be avoided! Acceptance by the Entente of the Nationalist program would compensate the nation for the sacrifices it would be called on to make!

The governments of the Entente found Sonnino’s demands excessive. In March and in April, 1915, he had a foretaste of what the Peace Congress itself would be like four years later. The bickering went on for a month and a half. Not a rock, not a hummock, not a rabbit hole, not an ant hill, but was bitterly and tenaciously contested. Around the insignificant peninsula of Sabbioncello raged a battle comparable to the struggle of the Trojans and the Achaeans for the corpse of Achilles. Sonnino, moreover, had not been very well informed by his friends in the Navy department. In the “Green Book” he asked for the cession of the “Curzolari,” supposing this to be the name of the Islands in the central Adriatic, whereas it belongs to the group farther south which comprises Leanto. The Pact of London itself demands two uninhabited rocks, Palazzuolo and Gruica. It calls for a “Canidola,” without distinguishing between the larger and smaller island of that name. It makes no mention whatever of Sansego, which is an island of 1,500 inhabitants with an important base for navigation. Following these stipulations, Italy would have acquired the shoals of Sansego, while the island itself would have been left to Austria! Furthermore there was a demand for the Pervichio Shoal but not for the Shoal of Saint Mark, which is an important administrative boundary. Similarly Toblach Pass became “Mount Toblach.”

The resulting Treaty of London is supposed to remain secret until the war ends, but the French disclose the arrangement just three weeks afterwards. Meanwhile, tensions between Italy and Serbia will detract from both countries’ attention to their mutual foe. Sonnino was little more than a conservative agrarian yes-man when he was appointed, and in the course of the war his diplomatic efforts will prove consistently disastrous. His assumption of a speedy victory leads Sonnino to make terrible recommendations about how much Italy should borrow and build. Sonnino will prove to be one of the most consequentially-inept diplomats of the Great War. 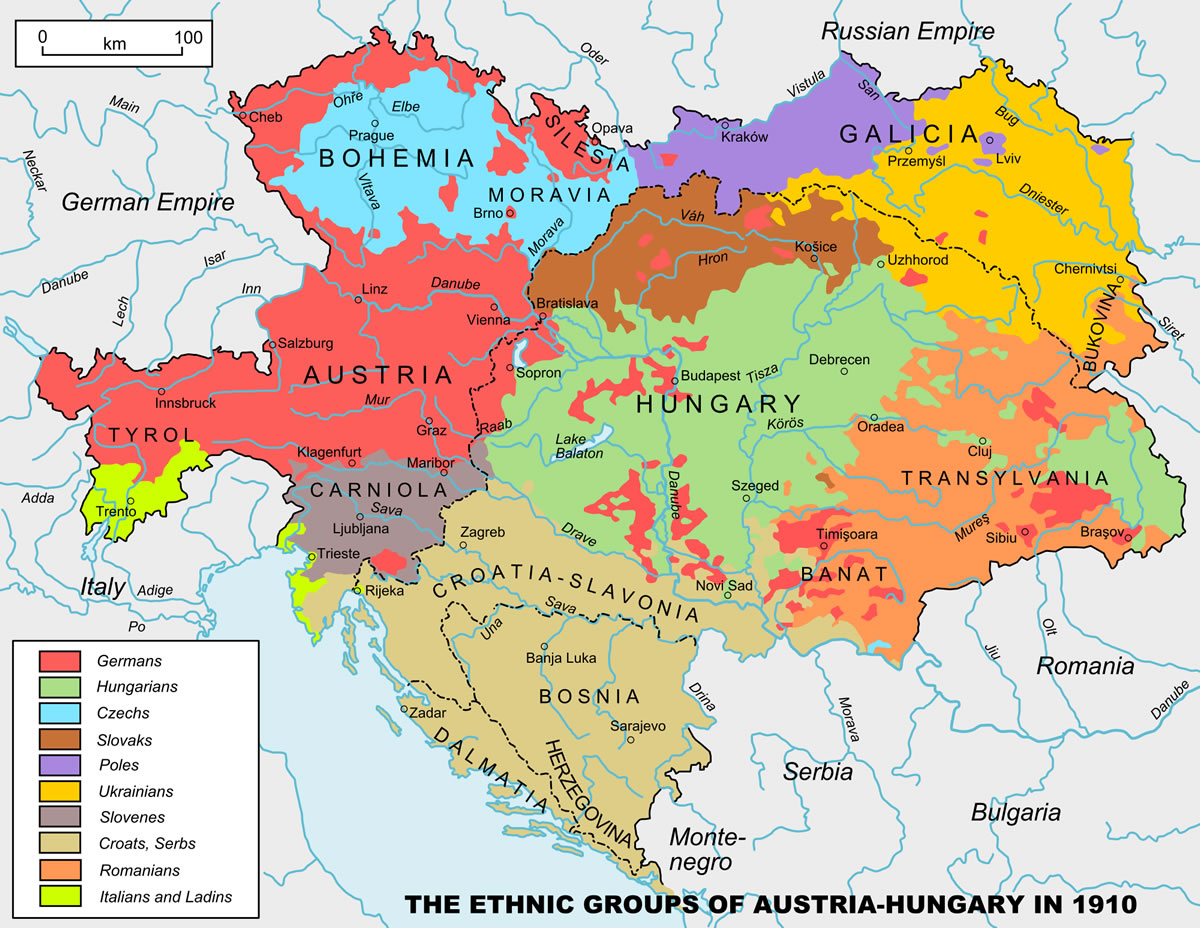 The ethnic makeup of the Austro-Hungarian Empire in 1910. Though small, the Italian-speaking Alpine and coastal provinces were near and dear to Vienna, which had very limited access to the sea. Click image to embiggen