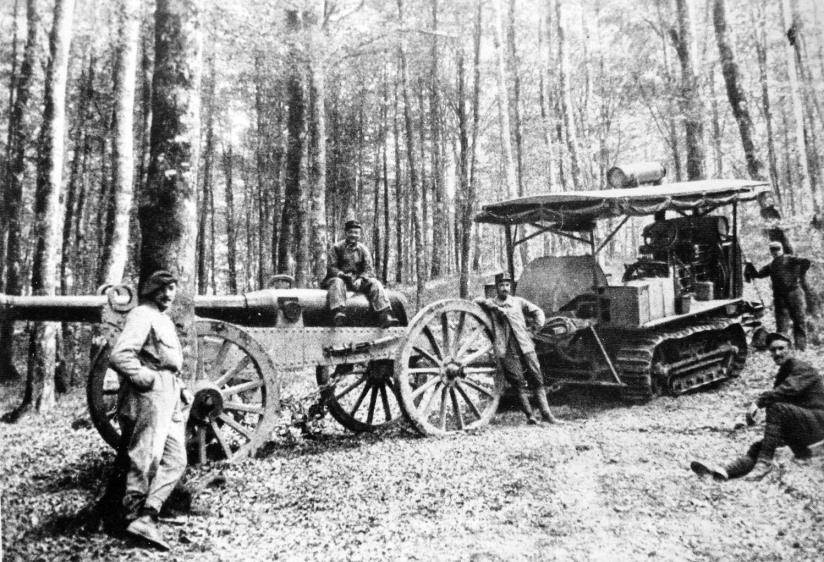 A century ago today, Winston Churchill orders the formation of a Landships Committee to be chaired by E.H.T. d’Eyncourt, Director of Naval Construction. This decision is instigated by Flight Lieutenant T.G. Hetherington, who first proposed a three-wheeled armored vehicle armed with 12-inch naval guns to Commodore M. Sueter, Director of the Admiralty Air Department, in November. Churchill received plans for a scaled-down revision in January featuring three 40-foot wheels supporting three turrets, each housing two 4-inch guns — and weighing around 300 tons.

Not surprisingly, Admiral Sir Percy Scott turned this monster down when Churchill forwarded Hetherington’s proposal to the Admiralty. But Hetherington pressed the idea of a large-wheeled land vehicle at dinner with Churchill six days ago, and d’Eyncourt is not opposed to the idea in principle, only in its present form. Meanwhile, Sueter has an idea of his own for a 25-ton vehicle armed with a 12-pound gun and riding on Pedrails, the only type of track built in England. B.J. Diplock, the inventor of Pedrails, is his collaborator.

Both projects are soon being pursued under the auspices of the Landships Committee. Colonel Rooks Crompton, an experienced engineer brought in to consult on fabrication, is soon at work on a version of Hetherington’s design that can carry fifty men, straddle a trench, and drop troops into the fight. But even though these fantasy steampunk designs have been anticipated in The Land Ironclads, a short story published by H.G. Wells in 1903, none of them will prove feasible in the real world. 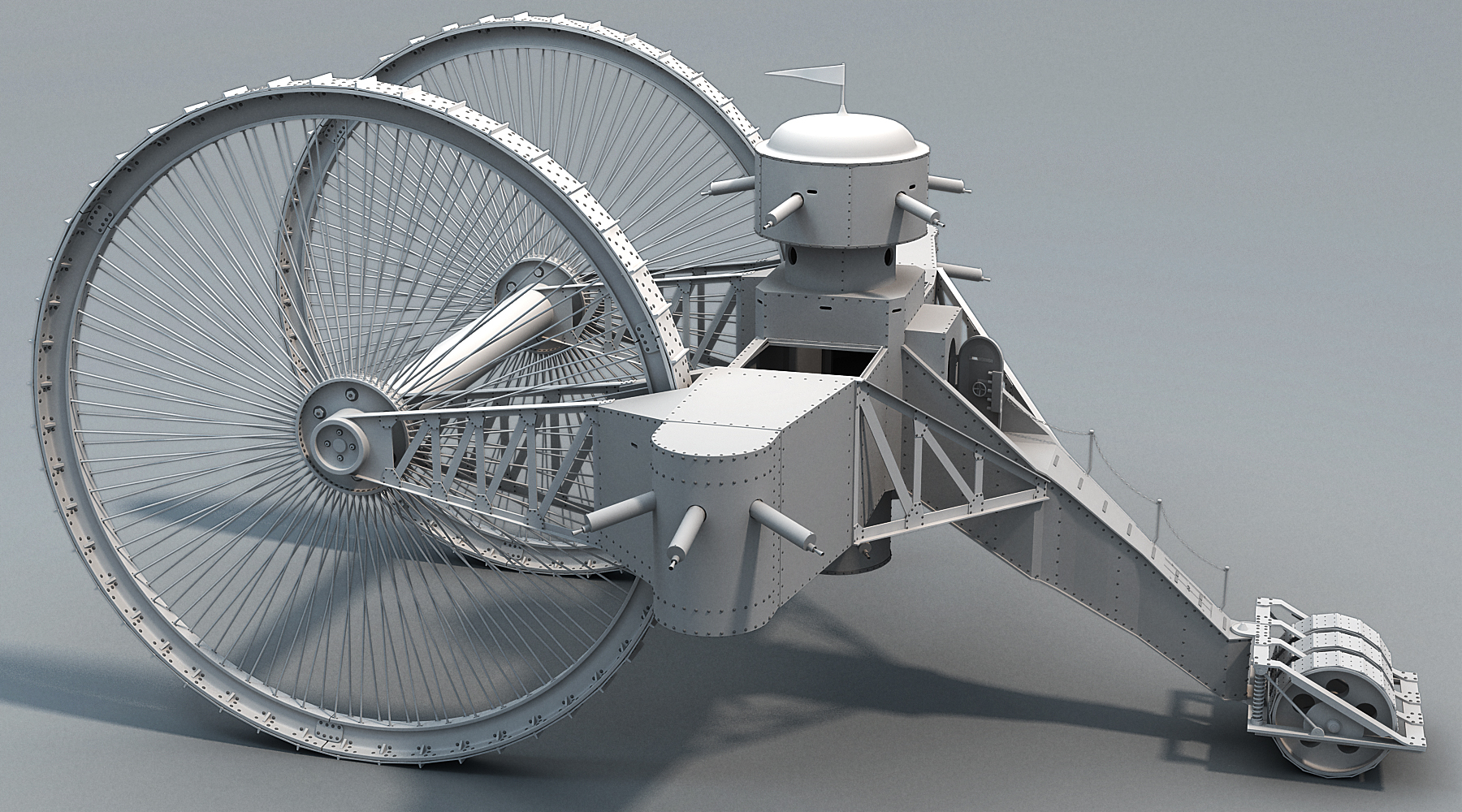 A computer rendering of the ‘Tsar Tank,’ a design similar to Hetherington’s that was developed simultaneously in Russia

In a classic case of parallel development, all three major allied powers are trying to invent their way through the same technological challenges at the same time: barbed wire, machine guns, and shrapnel fire are killing millions of men on all fronts when they try to attack. Germany also designs its own ‘landship,’ though only a few can ever be built due to shortages of raw materials.

For Britain, the key breakthrough in tank development comes after Colonel Edward Swinton writes three memorandums advising the Landships Committee to consider using an armored car on an American-built agricultural tractor. Calling it a “machine gun destroyer,” he is persuasive. By May, it has become quite clear that large-wheel and Pedrail designs are too unwieldy, so the Committee orders two ‘Creeping Grip’ tractors from the Bullock Tractor Company of Chicago. Like the Holt tractor (see photo at top), which British and French troops are using to haul artillery through the mud and inspired Swinton to make his suggestion, the ‘Creeping Grip’ is potentially capable of crawling through the quagmire of mud and wire.

The Victorian Colonel Crompton also orders a lighter tractor from the Killen Strait company and uses it in June for the first successful demonstration of a tracked vehicle’s ability to cross barbed wire. When he mounts an armored car on top of it, he has created the world’s first…what? The project names vary, but Swinton eventually settles on ‘tank.’ Crompton’s experiment with an ‘articulated’ design using two armored sections on the Bullock tracks is a failure; he is dismissed as consulting engineer in July. 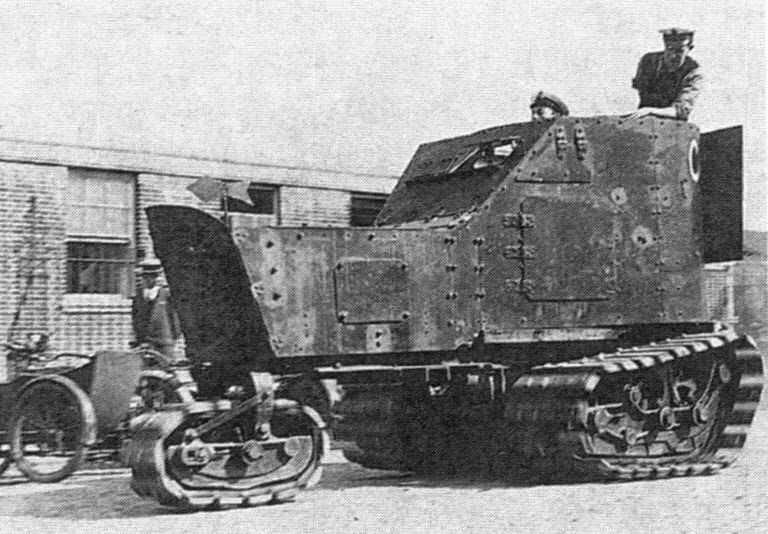 Proof of concept: the Killen Strait tractor with a Delaunay-Belleville armored car mounted on top

Finally, on July 29th the William Foster Company receives an order for a vehicle built in one body on two extended tracks. Dubbed ‘Little Willie,’ it is the world’s first true tank. After it swiftly passes a series of proving tests, a second, larger design is ordered in September. The first ‘Big Willie’ will be delivered in January of 1916. It will then take seven months to produce enough working tanks, and train enough crews, for Britain to use them in battle. Designed to destroy heavily-armed strong points, these weapons will quickly follow the way of aircraft to assume responsibility for finding and destroying one another. Crews will learn how to fight and win, but only at the cost of lives in trial and error.

Like German factories, British mass production centers are held back by imposed material shortages and production challenges. But unlike Berlin, London is not starved for motor fuel. Thus, one of the most iconic weapons of the Great War is also a study in conflict-induced scarcity holding back technological adaptation to the conditions of the conflict in the trenches. We cannot blame hidebound leaders or old ways of thinking for the outcome of this arms race, in which Britain will produce the most familiar tank while France produces the best.

Little Willie could pass for a modern light armored vehicle. The towed axle was supposed to enhance stability

The story of the tank is about ‘production’ and its challenges. Only the Materialschlact — a combined function of manufacturing, national resource limitations, and public financing — makes it possible to deploy tanks on a large battlefield. Mass production woes are already a state interest in 1915, and even today, the Materialschlacht provides the rationale for all the industrial-corporate state activities that peace activists are apt to call the ‘war machine.’ Many, if not most, mental conceptions and visualizations of said war machine involve tanks.

Thus the tank is an inherently political phenomenon, not just a story of materials or engineering or tactics. 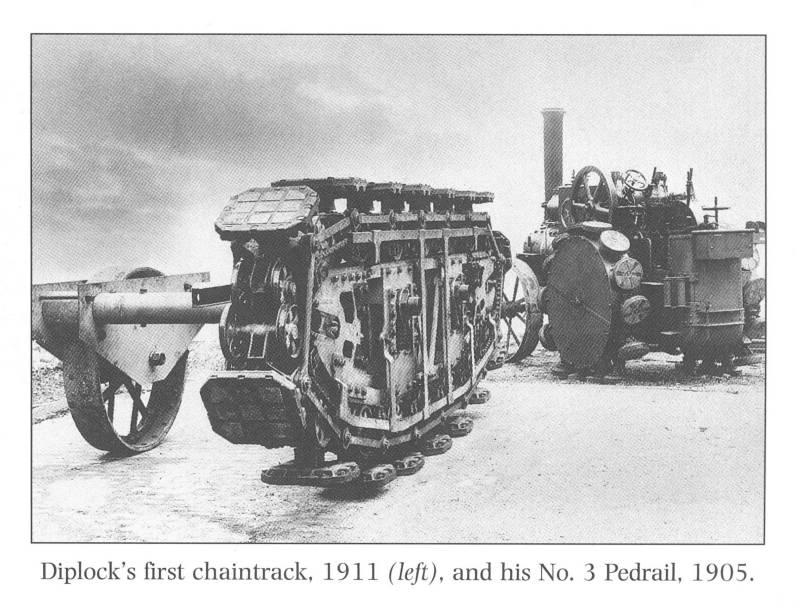