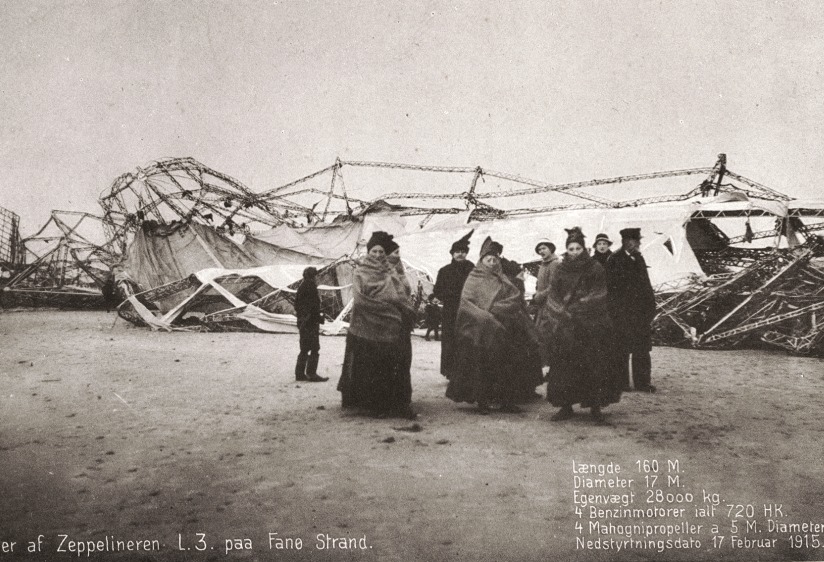 Before the Great War began, Britain used to issue weather reports by wireless to ships at sea, providing critical warnings during volatile seasons. But at the Admiralty’s request, that practice has been discontinued during the conflict, with the result that two of the Kaiser’s Zeppelins are unaware of a rapid drop in barometric pressure over the North Sea this afternoon. A violent, icy winter storm is forming on the open water and rushing straight for the coast of neutral Denmark with L3 and L4 directly in its path.

Both aircraft recently undertook the German Imperial Navy’s first Zeppelin raid on the British mainland. Caught now in high winds and freezing rain, the airships are soon losing altitude from the added weight of ice and struggle to make emergency landings while their engines fail, for neither ship is equipped with enough fuel to fight the storm. A little after 6 PM, the L3 crashes on the beach at Fanø, in Vesterstrand, whereupon her crew of sixteen immediately bails out. Kapitänleutnant Hans Fritz then sets the hydrogen-filled gasbags on fire “to prevent her from being blown further ashore and imperiling lives and the adjacent buildings.”

The next day, curious locals turn out to see the wreck for themselves, taking still and moving pictures of the beached leviathan. Helmsman Kurt Schönherr, one of the interned crew, will sit out the war to become a civilian airship crewman in peacetime — and then survive the fiery death of the Hindenburg in 1937. Though visually iconic, these extravagant machines are unready for peacetime flying, much less combat aviation.

Flying farther north, the L4 runs into fog, then sleet and snow. When two motors have failed, she becomes impossible to steer in the high winds. Descending over the surf at Boermose on the west coast of Jutland, eleven crewmen jump to safety — but one and two at a time, causing the ship to regain altitude with others still aboard. The last man to jump waits too long, breaking both legs upon landing. The Zeppelin is carried off by the storm with four men still aboard; her derelict shape will be spotted this evening off the Oscoe Lighthouse, but none of their bodies will be recovered.

Ordering the still-fit survivors to carry their injured companions, Kapitanleutnant Count Magnus von Platen-Hallermund leads his band to the nearby coastguard station, where he absurdly tries to claim they should be treated as shipwreck victims instead of belligerents. The deception fails, and all of them are interned until the end of the war in accordance with the laws of neutrality. 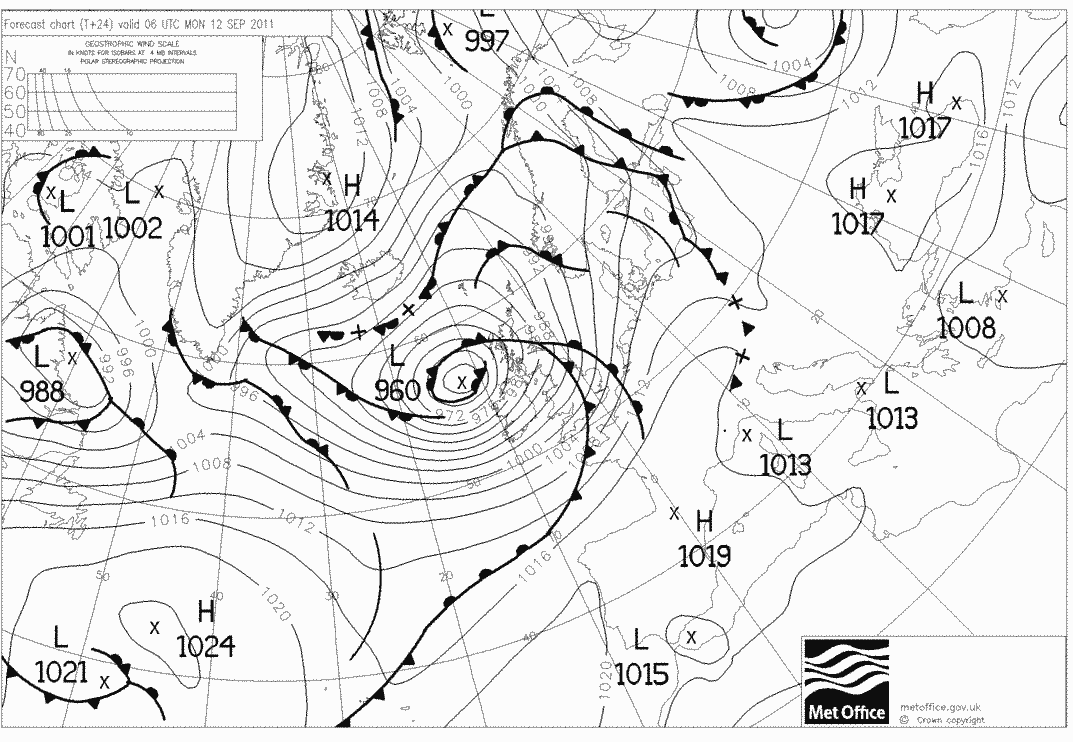 A synoptic weather chart. This standard templating format, showing low and high pressure systems as well as warm and cold fronts in motion, becomes standard during the Great War as the frontal theory of weather forecasting wins universal acceptance

Although the Kaiser’s Zeppelins will have little impact on the war, they nonetheless provide an important, if unintentional, insight. Ernest Gold, the great British meteorologist who has put on a uniform to build Britain’s very first military weather bureau, notices that the commanders of a 1917 flight of Zeppelins have failed “to allow for the effect of a warm air mass to the west in turning a weak southerly wind at low levels into a strong northerly wind at very great heights” — in other words, they have been blown off-course by high-altitude winds that were undetected from the ground. Weather observation is thus transformed into a three-dimensional science.

While the Germans created their own weather services to support air operations at the outbreak of war, the Meteorological Section Royal Engineers (better known as Meteor R.E.) has been slower to find acceptance in the chain of command. Many pilots still think they need only look outside to know what the conditions are, but this is rapidly changing as weather-related accidents claim lives. There is also a growing awareness of the importance of real-time weather knowledge for accurate artillery fire. But the technology which makes meteorology essential — prompting all armies to install weather stations that use telephones and wireless signals to send back increasingly-detailed reports, day and night — is poison gas. Awareness of the winds is crucial both for using gas offensively and for preparing defenders to expect it.

In 1914, meteorology was just three decades old in its modern form, while forecasts were very limited in scope and accuracy. By 1918, meteorology will become an essential science for all military operations — in the air, on land, and at sea — with consequent improvements in forecasting that would not have occurred otherwise. Indeed, we still use the term ‘weather front’ today because of this formative time in the history of weather science. 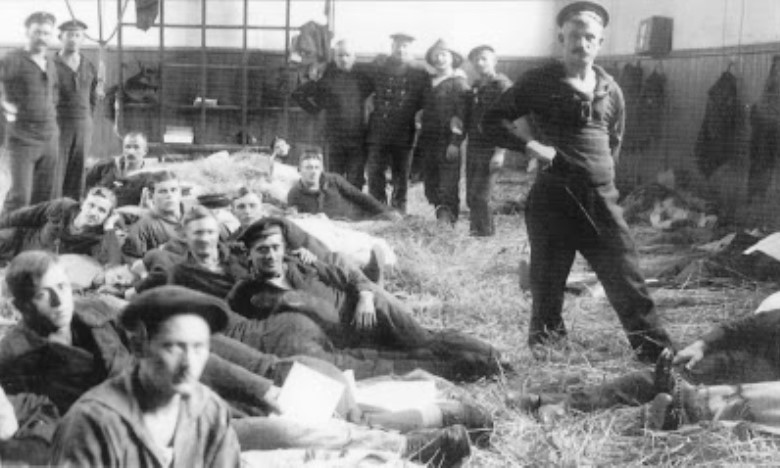 The crew of the L3 interned in Denmark. The sailor standing at right is believed to be Kurt Schönherr