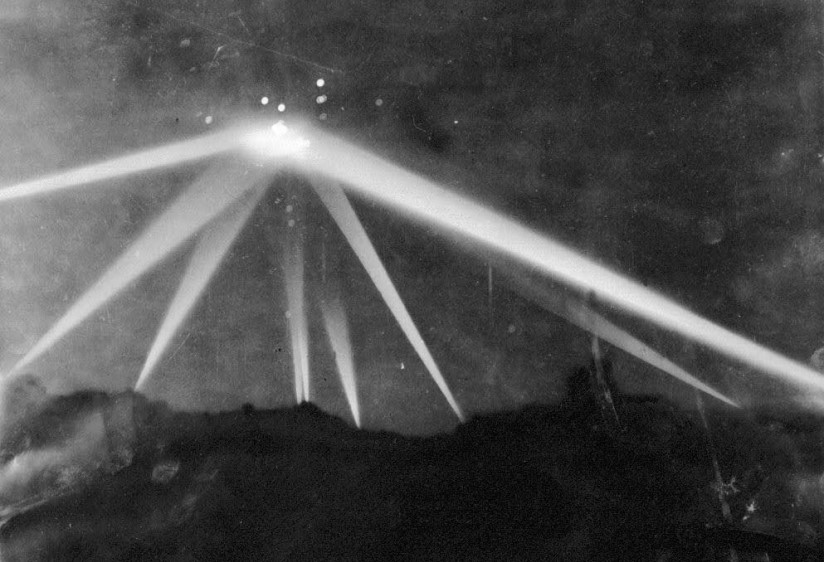 The above photograph was taken in 1942 during an incident that is sarcastically known as the ‘Battle of Los Angeles.’ Less than three months after the Pearl Harbor attack, and just one day after Japanese submarine I-17 surfaced off Santa Barbara to lob a few shells at fuel storage tanks, the city’s air defense crews were on high alert when someone reported a balloon carrying a red flare. A radar contact, and reports of aircraft engines, had put everyone on edge for hours beforehand. Spotlights then illuminated what was probably just a small, dense bit of cloud peaceably floating at low altitude on a cold February night, and the first gun crews opened fire just after 3 AM. Their flak added smoke to the brilliantly-lit mirage, and soon other crews began pouring their own fire into the glowing target that had been created. Over 1,400 rounds of ammunition were expended in a frenzy of frayed nerves; no evidence of a balloon or an aircraft was ever discovered.

War is inherently stressful, and all humans can be dumb, panicky, dangerous animals in wartime. There has already been a similar incident during the Great War in December, when the guns of Dover fired for half an hour at an imaginary U-boat armada. Although there is no gunfire tonight in 1915, another wartime panic takes place in Canada. Like the ‘Battle’ of 1942, this false alarm will be transformed into a flying saucer hoax by professional fabricators decades later.

We say that ‘war is a lie,’ but humans consistently tell their biggest fibs after the fighting is done. 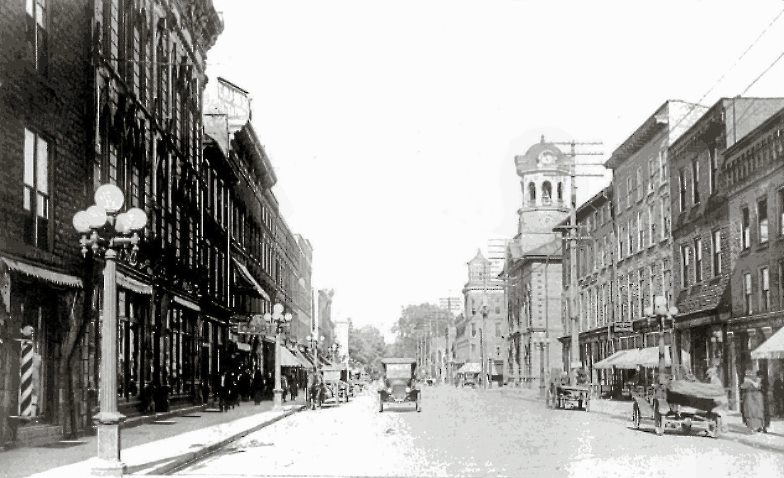 Submitted for your approval: Brockville, a bustling port city across the St. Lawrence River from Morristown, New York, in 1915

Paranoia has unsettled Canada since the beginning of the conflict, when talk of a German incursion stirred passions at the very moment Canadians were mobilizing to fight in Europe. Describing a vast army of German-Americans supposedly drilling in the still-neutral United States, a hoax letter landed on Prime Minister Sir Robert Borden’s desk in August. Just twelve days ago, a German expatriate bombed the Canadian Pacific Railroad bridge at the American border, raising fears that further attacks or acts of sabotage will follow. Sadly, these events have led to anti-German violence and social ostracism. It is a very tense time in Ottawa.

As residents of Brockville, Ontario leave late church services this evening, they see “at least three” lights apparently flying overhead in a sky full of low clouds and rain. Three constables confirm the sighting, and the mayor telephones the Prime Minister at about 10:30 to inform him that the mysterious objects are dropping “fireballs or light balls” and shining a spotlight on the town as they fly towards the Canadian capital. While mass hysteria breaks out in Brockville, sixty miles away in Ottawa, the nation’s highest-ranking police officer orders Parliament Hill and the Royal Mint blacked out. Lights dim at the Governor-General’s home and other buildings shortly thereafter, and the blackout spreads until most of the city is dark after midnight.

Headlines the next day project a delighted, sublime terror: Ottawa feels first thrill of war. Ottawa in darkness awaits airplane raid. Parliament and the city council draw their blinds, and a city alderman climbs the tower of city hall to keep a lookout, but business is otherwise conducted as normal. The news is wired to England, which has recently experienced its first Zeppelin raids. That afternoon, the House of Commons roars with laughter when a momentary electrical failure inspires William Crooks, Labour MP for Woolwich, to joke: “Hello, they’re here!” 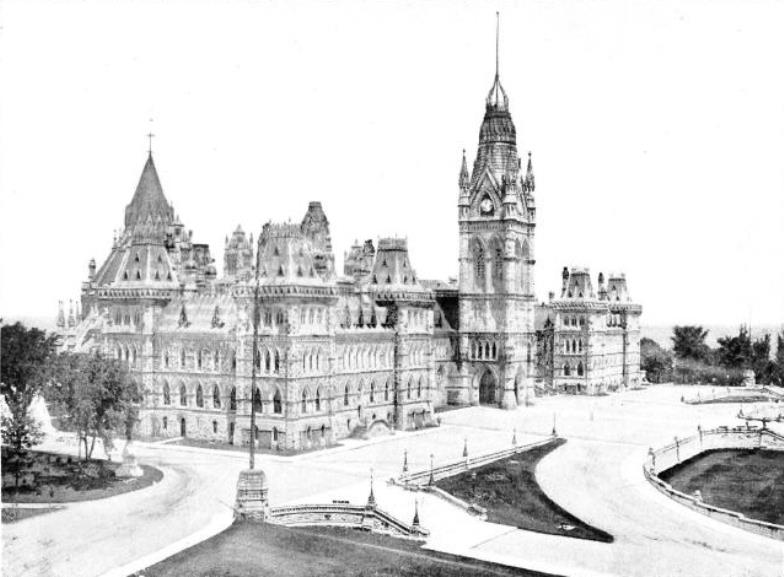 Parliament Hill in 1914, when a small town’s police chief could still telephone the Prime Minister

It is actually not the first phantom air raid to strike terror in the heart of Canada during the Great War — or the last. Reports of unidentified flying objects peaked in the early weeks of the war when mobilization fever was at its height, and return whenever local events renew those public fears: after the 1917 Halifax explosion, a disastrous accident which kills 1,500 people, witnesses swear they have seen airplanes or Zeppelins bombing the harbor. We should therefore consider these incidents nothing more than examples of perfectly-human wartime hysteria.

In fact, tonight’s incident is traced to a balloon flight launched by some boys on the American side of the border to commemorate the end of the War of 1812. Not only do the culprits admit their acts, the balloons are discovered on the river ice where they fell at the end of their short flights. The falling ‘fireballs’ were probably just the candles slipping their amateur moorings and falling from the balloons, while the ‘searchlight’ was likely just a flash of lightning in the foul weather.

Having experienced their first ‘thrill of war,’ Borden’s government refuses to accept this explanation at first. Indeed, the immediate public reaction is disappointment and denial that their ‘thrill’ could be a mere prank; no one likes to be the fool. As a result, events tonight will eventually take on a whole new character in the retelling.

During the 1950s, another conflict — a Cold War characterized by fears of nuclear Armageddon — is stirring Americans to paranoia when a rash of ‘unidentified flying object’ (UFO) sightings collectively forms into the ‘flying saucer’ phenomenon. As the mythology of UFOs becomes a cottage industry, cranks and creative souls look to history for past examples of illusory skyborne phenomena, rewriting events to fit a new narrative of alien contact. 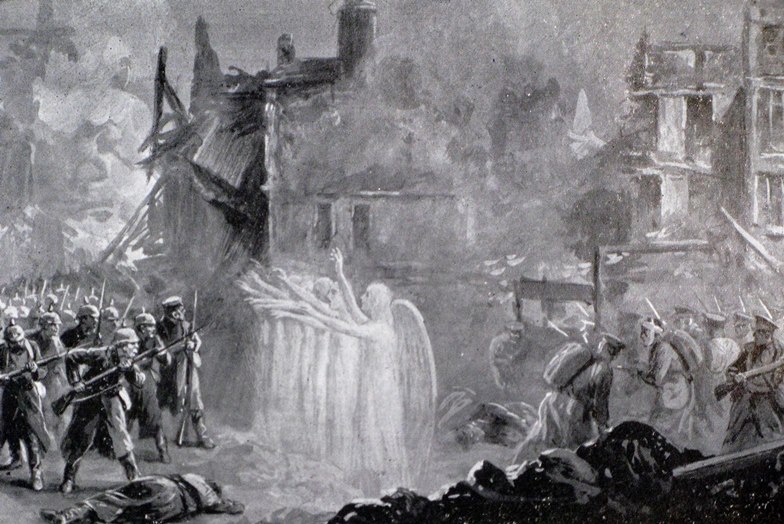 Still invoked as a true story by Christian evangelists, the so-called Angels of Mons are an urban legend inspired by a short story. The legend resists debunking, demonstrating our human willingness to see whatever we want to see — especially in wartime