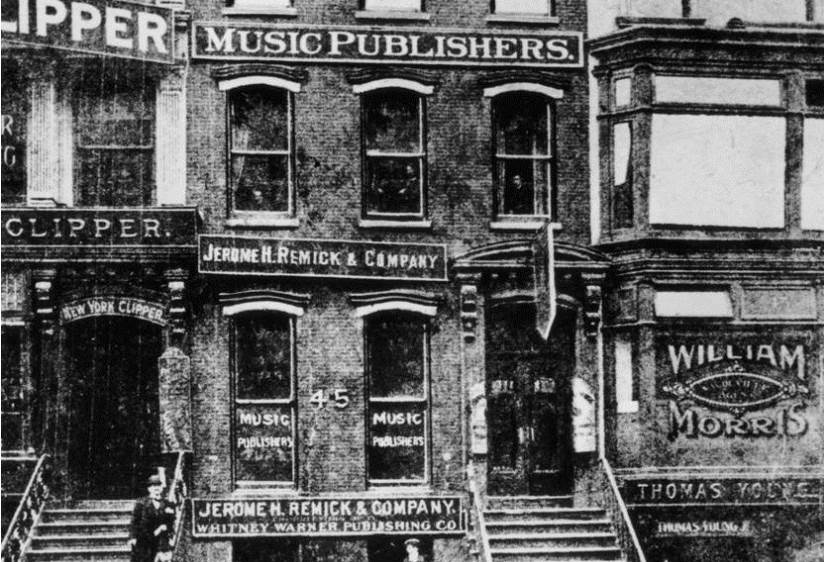 In 1915, Thomas Edison stops producing original music for wax phonograph cylinders, which were overtaken in popularity by discs in 1910. This transition between media formats mirrors a transition of themes, for while Europe burns and starves, its musicians press only patriotic songs anymore. But America is still neutral, and her musicians are thriving thanks to the Copyright Act of 1909, which has updated American laws to make them appropriate for the recording revolution.

Seen above, Tin Pan Alley is the center of the American music industry in 1915. At a nearby hotel in New York City, composer Victor Herbert founds the American Society of Composers, Authors and Publishers (ASCAP) today, bringing the best-known musicians in the country together under a single umbrella organization which can collect music royalties and distribute them to the artists. By freeing them of responsibility for copyright enforcement and collection, ASCAP gives musicians free time and energy to make more music — and all of us will be enriched by the new arrangement.

Also unlike Europe, there are antiwar songs playing on American phonographs. This year, ASCAP founding member Irving Berlin produces Stay Down Here Where You Belong, a comic record which imagines the Devil warning his son of humanity’s perfidious warmongering:

To please their kings they’ve all gone out to war

Kings up there are bigger devils than your dad

But American public opinion is evolving over time, and the song will become something of an embarrassment to Berlin in 1917, when the United States enters the war and he is drafted to write patriotic songs for the Army. Twenty years after starring in his patriotic Broadway hit Yip Yip Yahank, Berlin will resurrect a song that he rejected for the production, giving us the immortal God Bless America.

As a former conductor of the Presidential Marine Band and the author of dozens of marches, including this year’s Pathfinder of Panama, ASCAP founding member John Philip Sousa is a natural choice for those seeking a patriotic flourish. In 1917, he will be commissioned by the US Navy, yet because of his large personal income from royalties he proudly donates his salary to the Sailors’ and Marines’ Relief Fund. Known for wearing flashy, military-style costumes before the war, when the conflict ends Souza will continue wearing his Navy uniform as he returns to leading his own band.

When Souza dies in 1932, ASCAP has enlarged its royalty collection to cover a whole new medium: commercial radio broadcasting. Although ‘wireless’ technology has already proven its strategic value in 1915, there is no civilian market for radio receivers yet. Nevertheless, the world’s first commercially-successful ‘pop recording,’ St. Louis Blues, was already published last September by future Army band leader W.C. Handy, so by the time household radio sets are ready for American consumers the demand for ‘popular music’ has already been firmly established. Another Handy song, Memphis Blues, will feature the world’s very first jazz break.

James Weldon Johnson, another African American songwriter as well as a newspaper editor and former American consul in Nicaragua, makes history today as one of the founding members of ASCAP. Although he will not serve in uniform, Johnson will become a leading anti-lynching activist. These activities win him the position of executive secretary for the National Association for the Advancement of Colored People (NAACP) in 1920. His best-known song, Lift Every Voice and Sing, is also called “the Negro national anthem.”

This is not a fallow time for artists and culture. On the contrary, the Great War is turning into one of the most formative and important moments in the history of human creative expression. Not only are the creators thriving like never before as new technologies spread their messages around the world, they are engaged in acts of musical liberation that will echo down throughout the ages. Every single time we enjoy a work of recorded music, we are affected by their legacy.