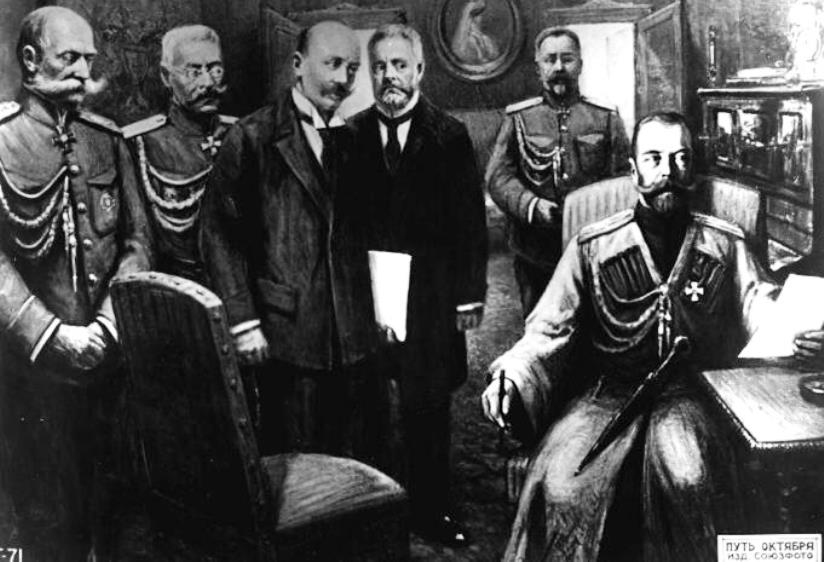 Today in Russia, weeks of rumor are finally confirmed by a news bulletin from Grand Duke Nicholas: Colonel Sergei Nikolaevich Myasoyedov, former counterintelligence officer and wartime interpreter for the 10th Army in northern Poland, was hanged on March 10th after a one-day trial in which the Warsaw Court Martial determined that he had transmitted information about Russian troop movements to the German General Staff. Some of Myasoyedov’s accomplices are already in custody, and of course “investigations continue.” It seems as if Alexander Guchkov’s public warnings of pro-German conspiracy within the country’s highest circles of power have been confirmed. 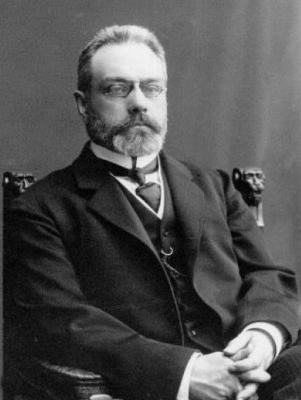 Alexander Guchkov, key figure in the Myasoyedov trial, the Tsar’s abdication (see illustration at top), and the 1917 Provisional Government

As usual, French Ambassador Maurice Paléologue was aware of the situation long before it became public — in fact, he knew about the affair four days before the trial, and has received special access to high-level discussions of the matter. On March 20th, his memoir of wartime in Petrograd reports:

I have been shown in confidence a letter which the “Labour-Socialist” deputy, [Alexander] Kerensky, recently wrote to President Rodzianko asking him to secure an immediate session of the Duma with a view to questions being put about the Miassoyedov affair:

“The centre of all this treachery,” he wrote, “is the Ministry of the Interior. . . . Russian society knows well enough that those in charge of that department are bent solely on the restoration, at the earliest possible moment, of those old and close relations with the Prussian monarchy which were an indispensable support to our reactionary forces at home. The Duma must protect the country against these stabs in the back. In the name of my constituents I beg you, Mr. President, to insist upon an immediate meeting of the Duma so that it may perform its duty of bringing the Executive to book at so grave a moment.”

Myasoyedov is also close to Vladimir Sukhomlinov, the Minister of War, having served on his staff and allegedly carried on an affair with his wife. Paléologue distrusts and detests Sukhomlinov, whose “whole personality breathes physical exhaustion and defeat;” he holds the Minister responsible for Russia’s glacial development of ammunition manufacturing capacity, a material shortage that has resulted in battlefield reversals on the Eastern Front. Already under bureaucratic siege, Sukhomlinov will be forced out of office in June and later be jailed at the Fortress of Peter and Paul in St. Petersburg.

But what seems like an open-and-shut case of treason to Paléologue at the time is not so clear in retrospect. There is scant evidence that Myasoyedov gave the Germans any information, and the alleged treason is less plausible than known facts about recent Russian defeats. In fact, the closer we look at the charges and the accusers, the more Colonel Myasoyedov’s execution appears to have been an injustice — a purely political intrigue in an atmosphere of wartime scapegoating. It is not for nothing that Alexei Polivanov, the man who replaces Sukhomlinov as Minister of War, later admits the trial and hanging were “judicial murder.” 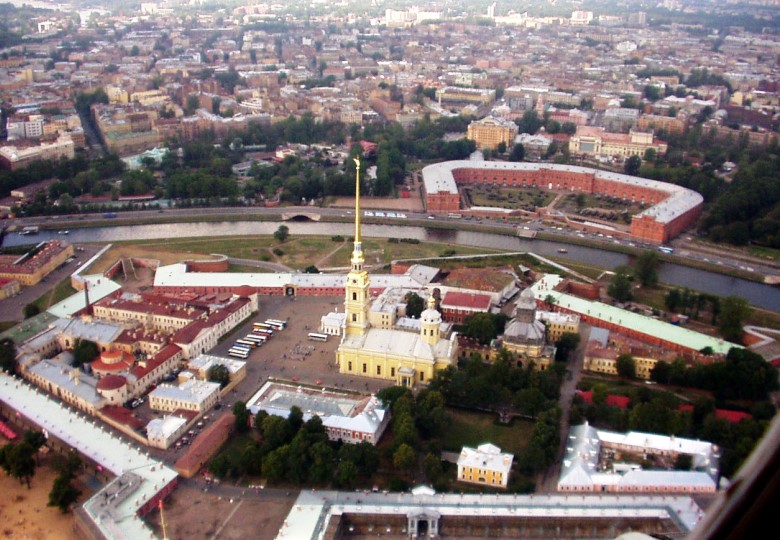 In 1907, Myasoyedov was an officer in the Railway Gendarme Commission working in the Polish borderlands. This job necessarily brought him into contact with German and Austrian colleagues who thought well of him, but it also brought him into direct collision with the Okhrana, the Tsar’s state security apparatus. That year, Myasoyedov testified in the court case of some petty smugglers on whom the Okhrana had planted revolutionary literature. According to one version of events, his truth-telling under oath earned the enmity of the organization, resulting in his firing.

Myasoyedov resurfaced in 1912 as Sukhomlinov’s special agent investigating the political reliability of officers. While investigating leaks from the Russian War Ministry to the Austro-Hungarians, he accused Polivanov of the treason. Alexander Guchkov, Polivanov’s powerful patron in the Duma — who made his political reputation opposing Sukhomlinov in the Army Committee, and who secretly organizes networks of anti-dynastic officers in the Army — contrarily accused Myasoyedov of responsibility for the leaks, and arranged for a friendly newspaper publisher to run the story on his front page. Angered by the bourgeois stain on his honor, Myasoyedov sued the publisher.

Accounts differ as to whether Myasoyedov or Guchkov was first to make the challenge, but we do know they ended up fighting a duel with pistols at fifteen paces. Myasoyedov missed his shot; Guchkov then fired into the air, symbolically asserting that his opponent was unworthy of the honor by walking away without shaking hands. Asked by friends to explain his actions, Guchkov reportedly quipped: “I didn’t want to interfere in his natural death by hanging.” 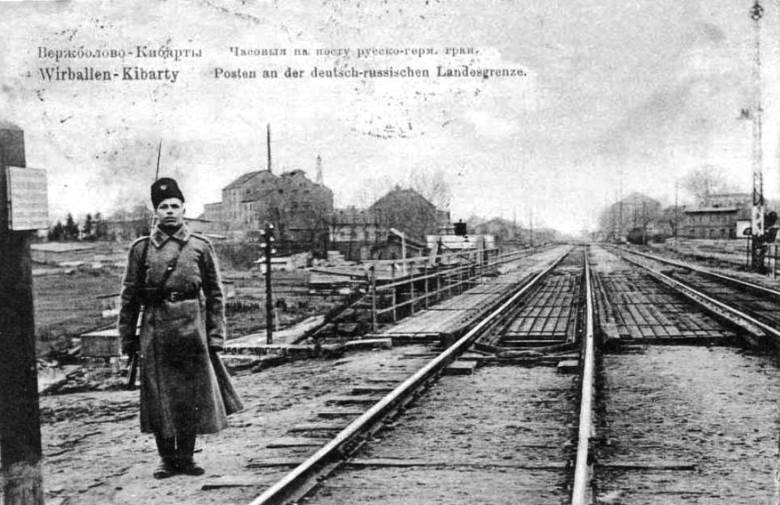 A prewar postcard of the border crossing at Verjbolovo, where Masoyedov served in the gendarmes. Via DelCampe.net

These old vendettas inform the Myasoyedov affair. Myasoyedov’s accusers tell a different story, of course: they say that he was a traitor, and that his death had nothing to do with his role as Sukhomlinov’s political officer within the Russian Army. They say that Myasoyedov had pilots dropping Russian secrets in enemy territory. A pilot is even arrested, but military pilots understand that this scenario is actually difficult to execute in a combat zone once, let alone on a regular basis. Another accusation has Myasoyedov communicating with German agents through neutral Sweden by way of a Petrograd merchant sending coded telegrams, but this is also never proven.

In fact, poor radio discipline and slow production explain the recent defeat and continued failure of the Tenth Army; there is no documentary evidence whatsoever that Germany has a high-level informant in the Russian War Ministry in 1915.

The charge of treason stands on three shaky legs. The first is what appears to be Myasoyedov’s name on a captured German document in France. The second is a paroled Russian prisoner, Lt. Kolakovsky, who supposedly offered his services as a double-agent to the Germans and was given Myasoyedov’s name as a contact, only to betray him upon his return; in fact, Kolakovsky is kept under observation and considered an unreliable source. The final prop is Mikhail Dmitriyevich Bonch-Bruyevich, zealous commissar and chief of staff of the Tenth Army. Known for deporting Jews and oppressing ‘undesirables,’ Bonch-Bruyevich dislikes Myasoyedov for protecting a Jewish-owned company with royal connections that is engaged in wartime smuggling. He claims to have sent two secret agents to Myasoyedov; masquerading as a chauffeur and a mechanic, these men supposedly accompanied the busy Colonel to a meeting with a German farmer, where they watched him pass secret documents. Neither alleged witness is ever named or makes a statement themselves.

Nevertheless, this fantastical charging instrument was good enough for Grand Duke Nicholas, who gave warrant for the Colonel’s arrest and subsequent execution. None of it fits with proper counterintelligence doctrine, however: if Kolakovsky was at all reliable, he should have been sent to meet Myasoyedov in order to confirm his treason. Meanwhile, Bonch-Bruyevich’s brother Vladimir is the personal secretary to Vladimir Lenin, who currently resides in Switzerland. (In fact, Lenin’s friend Grigory Zinoviev prints documents from the Tenth Army in the Bolshevik magazine Sbornik Sotsial-Demokrata.) As reward for his services, Bonch-Bruyevich is made Chief of Staff of the Sixth Army, becoming the highest-ranking counterintelligence officer in Petrograd despite his revolutionary connections. He will work with Okhrana agents, reorganize the Army’s counterintelligence service, and turn Bolshevik in the Spring of 1917, specializing in forgery. Future War Minister Polivanov will also later join the Bolsheviks.

Alexander Guchkov, however, will end his days in self-imposed exile. Despite his industrial and military reforms, and his success in maneuvering both the Grand Duke and the Tsar from their offices, he ends up on the wrong side of revolution.