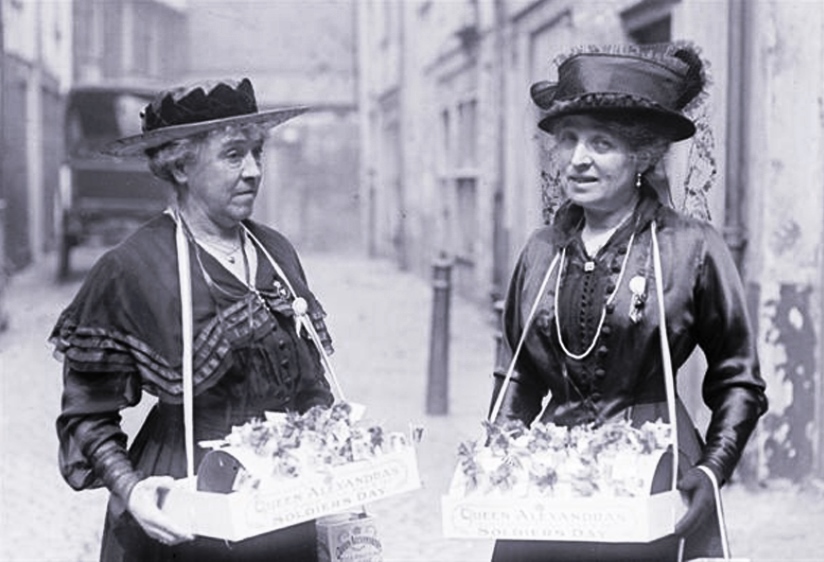 In Britain, the Great War is a people’s war — one led by the working class. Their mass participation in the war effort, not merely as volunteers to fight but also to serve those who fight, gives us metrics of public enthusiasm: around 1.2 million British women and 400,000 British men will work for charitable causes on a regular basis during the conflict, often sacrificing holidays and weekends to support the men at the front. Street collections, such as the women selling penny flags during the 1917 Flag Day event depicted in the above photograph, will raise £268,736 to answer wartime needs by the fourth year of the war, then bring in £391,864 in 1918, and peak at £416,640 in 1919 as troops return home. That is just one of thousands of examples.

In 1914, there were 35,000 private charities in Britain; by 1918, there will be more than 53,000, large and small, local and national. Although estimates vary, total wartime charitable fundraising in the United Kingdom is thought be more than £75 million and as much as £150 million — figures which do not include the £20-30 million value of donated items and goods. The Great War will cost Britain an estimated £3,251,000,000, which makes charitable fundraising a critical element of victory in the age of ‘total war.’ Altogether too many wounded men will need prosthetic limbs, masks to replace their faces, and the means to look after their families, yet Britons will meet these challenges with a stiff upper lip.

If we accept the syndicalist theory of the so-called ‘Christmas truces‘ as spontaneous outbreaks of humanity’s supposed innately pacifist class-consciousness, then what are we to make of communities which send regiments to the fight, then turn out to support their men by donating bedding and linen to the unit hospital, or by filling the unit store with cigarettes and canned goods, or buying trinkets to support the families of POWs? What are we to make of the way the British people respond to the tragic, awful casualty lists by redoubling their efforts? If a relative few men holding tense meetings in no man’s land for a few hours count as peace breaking out, then what should we think about the enormous, extraordinary efforts by civilians to meet their country’s hour of need in wartime? 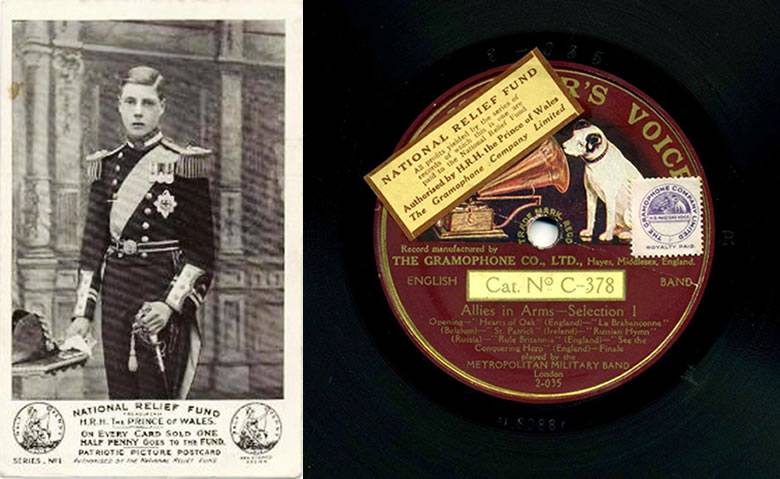 The necessity of charitable social responses was clear from the beginning as wage-earners were called up from the reserves, putting their families in severe hardship. Some markets collapsed immediately, putting other wage-earners out of work. Appointed War Minister and tasked with raising the largest armies Britain has ever seen, Lord Kitchener immediately understood that men would not volunteer to fight while their families starved at home. Four days after parliament voted to declare war on Germany, Prince Edward set up the National Relief Fund to aid those suffering from “industrial distress” as a result of the conflict, stating: “At such a moment we all stand by one another, and it is to the heart of the British people that I confidently make this earnest appeal.”

In its first week, the NRF took in £1 million. During its first year of operations, the organization will raise £5 million, setting the pace for everyone. Today, the Chorley Guardian and Leyland Hundred Advertiser reports on a meeting of the Adlington and District War Distress Committee that was held earlier this week. Note the use of screening processes in the awarding of relief:

The Secretary reported that 17 sacks of potatoes had been received, and the Treasurer reported the week’s subscriptions amounted to £1 15s. 4d, making a grand total of £697 8s. 10d. The Hon. Treasurer also reported that contributions from Ellerbeck Colliery employees would not, in future, be paid in to the National Relief Fund, as a committee was being formed to utilise the funds which would still be collected, for the provision of relief for the dependants of colliery men who had joined the colours. The total amount collected from the employees of the Ellerbeck Colliery Co. was £188 16s. 2d, making an average of £8 11s. 9d. for 22 weeks. There were six applications for assistance, and four were granted.

In September, a new office of the Director General of Voluntary Organizations (DGVO) brings thousands of voluntary associations together to guide and coordinate their efforts: for example, needlework groups need exact instructions on military uniform regulations so that regiments aren’t dressed in mismatched clothing. But the explosive growth of charitable giving inevitably leads to some fraud, so in 1916 parliament passes the War Charities Act, mandating registration and licensing. For historians, the result is a treasure trove of data on British society’s response to war. 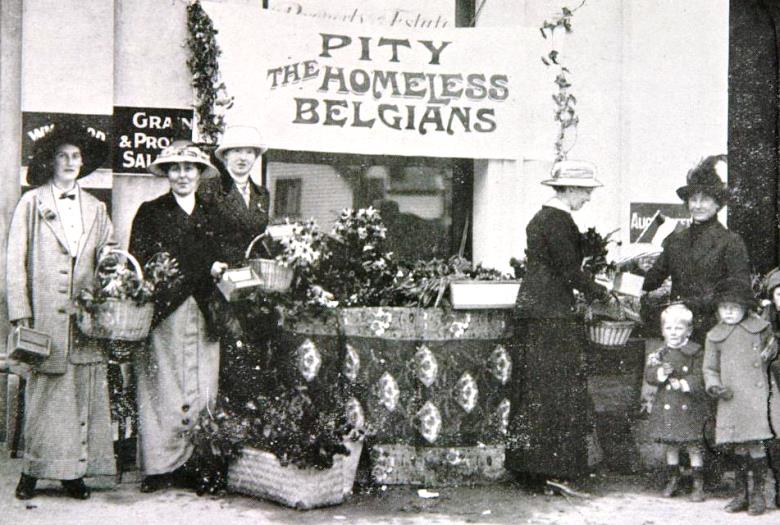 A Belgian Relief event in New Zealand. Women played the primary role in leading and undertaking these events

All of this has a huge effect on British women. Their social service organizations were already booming before the Austrian ultimatum, but their value was rarely recognized. Turning out right away in their tens of thousands to raise money, run charities, knit and sew, dig gardens, and organize relief — usually before any prompting by government or press — British women are already broadly recognized as essential volunteers to the war effort. Now officials extol the virtues of their civic commitment and leadership on a regular basis. Personal liberation becomes a common reaction; suffragists pounce on the opportunity to advance their argument for political equality. In August, Millicent Garrett Fawcett, President of the National Union of Women’s Suffrage Societies, called on women to “prove ourselves worthy of citizenship.”

The Great War will see more than six million refugees internally displaced in Russia, hundreds of thousands of Serbs uprooted from their land, and millions of Armenians forcibly relocated. Publicly-regulated private charities will try to answer all of these challenges. Britain already hosts more than a quarter million Belgians, while the American-based Committee for the Relief of Belgium has already pulled off a miracle just by preventing famine in the low country this Winter.

The social effects of the conflict are already reaching far beyond London to Paris and New York, stirring the nationalism and solidarity of ethnic minorities along with the equality dreams of women. For example, nine days ago the great Jewish civil rights lawyer Louis Marshall gave this passionate quote to the New York Times regarding his community’s response to atrocities on the Eastern Front:

“In the world today there are about 13,000,000 Jews, of whom more than 6,000,000 are in the very heart of the war zone: Jews whose lives are at stake and who today are subjected to every manner of suffering and sorrow, and the great American Jewish community is not doing its duty toward these sufferers. In the United States there are between 2,000,000 and 3,000,000 Jews, nearly all able to do something and yet, after months of work, we have not raised more than $300,000. In New York there are more than 1,000,000 Jews, some of them persons of great affluence, but many of them seem to think if they give a few hundred dollars they have done their duty.

“We hear of the pogroms in Russia, in Poland, in Galicia, and yet we sit indifferent. In Palestine starvation stalks through the land. Shall we selfishly enjoy ourselves and say we would like to, but cannot help because of hard times, and think we are doing our duty? No. The time has come from every man and woman and child to do his duty, and we must fulfill that duty quickly or it may be too late in hundreds of thousands of cases.”

Flag Day, a brand-new tradition, was invented in Scotland last September by Agnes Morrison, who sold out her entire stock of Union Jack flags in an hour. Many British wartime charities still exist to this day, including the British Limbless Ex-Service Men’s Association (BLESMA). But the most visible remaining artifact of this era is the lapel poppy, that ubiquitous symbol of the Great War’s remembrance. First sold on the streets of London by the Royal Legion, no war memorial is possible in England today without them.