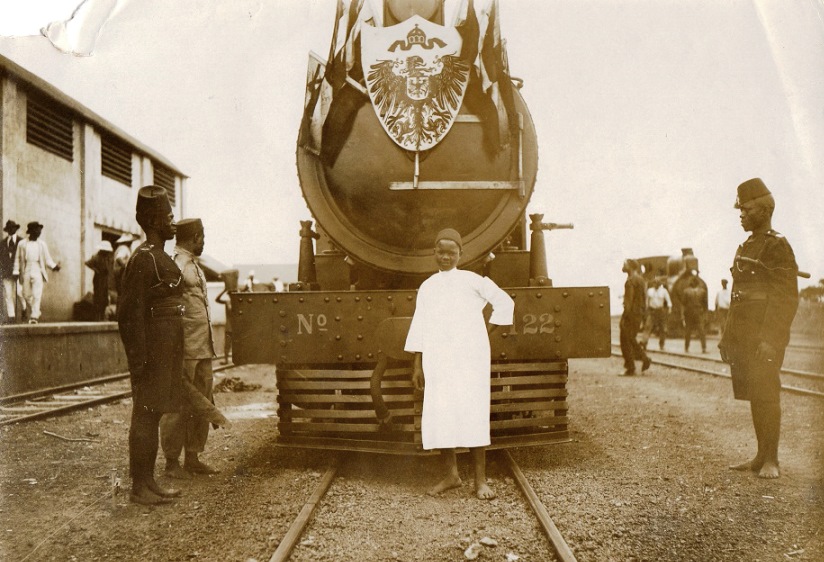 The holiday season has not been peaceful in Africa. In fact, a British column set out on Christmas Day to surround and take the sandbag-fortress at Dschang two days ago. General Charles Dobell judged the location too far from Duala, the port city of Kamerun, to support an occupation, so his troops destroyed it before decamping. Perhaps sensing weakness and opportunity, Major Carl Zimmerman attacks the town of Edea today as well as the town of Kopongo, twenty miles farther inland. Defenders are alerted to the operation when their telegraph line goes dead, cut by elephant riders.

Sitting at the highest navigable point of the Sanaga River, Edea is also the terminus of the Kamerun colony’s central railway line. The allies have occupied this crossroads of the German colonial plantation economy since October, cutting off many of the Kaiser’s loyal defenders from their homes and property or any access to relief and resupply. Out of a prewar population of perhaps 1,400 white male colonists of fighting age, more than nine hundred have already been killed, taken prisoner, or interned. Zimmerman’s 1,200-man force is mostly native Schutztruppen trained to take commands in Pidgin English. His opponent, Colonel Mayer, commands a force of several hundred Senegalese Tiralleurs.

Thus, most of the fighters today are nonwhites obeying orders to kill white men. Although it will take decades yet for the full process of decolonization to unfold, the Great War is forever sundering the mythical foundations of white European supremacy on the African continent. 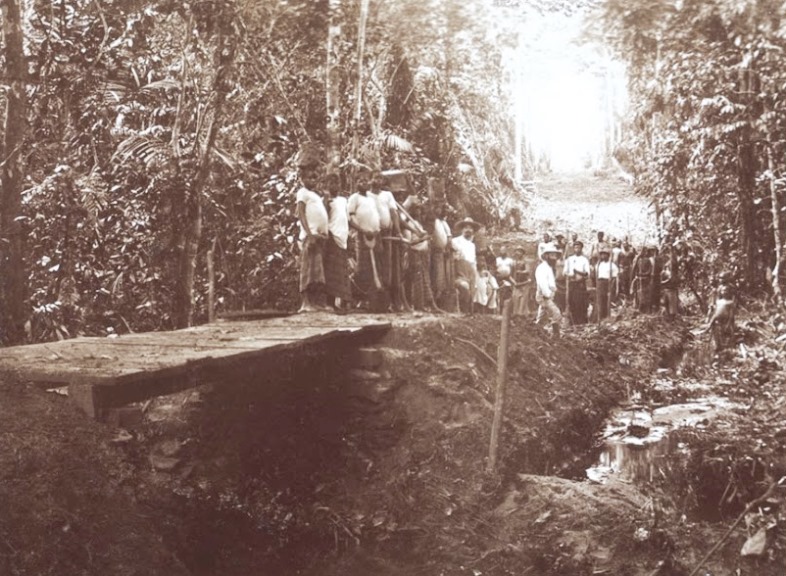 A bridge on the road from Sakbajeme to Edea under construction in 1909. Note the narrow track and limited sightlines that make ambushes effective against infantry columns strung out in double or single file

Colonel Mayer’s Tiralleurs have prepared devilishly-clever defenses. Rather than dig a continuous wall or ring, their fighting positions cover the town approaches — and each other — with well-planned crossfires in zones that have been cleared of cover. A blockhouse has even been constructed at the Kopongo outpost, against which Zimmerman commits a reduced company. Germany actually has more machine guns in the theater than the allies do, but just as in Europe, those crew-served weapons prove much easier to use in defense than the attack, and Zimmerman has no artillery support to deal with bastions or defenses.

Mayer’s native troops are crack shots. Zimmerman’s assaults are thrown back all day long from both objectives with an ease that borders on contempt; he is forced to leave behind more than two hundred dead and wounded men lying in the open, along with one of his machine guns. Only four defenders have been killed at the cost of twenty more Europeans whose leadership and participation are so essential to the German ‘bush war’ strategy. A long day ends with Zimmerman’s columns in retreat towards the German redoubt at Yaunde, the modern-day capital of Cameroon, conserving his precious, limited manpower.

Unlike altogether too many German generals, Zimmerman does not attempt to reinforce his failure. He chooses instead to regroup and march to where he is not expected, attacking Dobell’s command at Nkongsamba and pressing him back into trenches at Bare, the terminus of the northern railway. General Dobell’s wise decision not to leave his force extended along vulnerable jungle trails has left him in a better position to concentrate against such an attack. With German sabotage repaired, the Kaiser’s railroads provide him excellent tactical and logistical mobility, ammunition and reinforcements. He wants many more men if he is to ‘clear and hold’ the rest of the colony.

Despairing of hard losses and unable to make his enemy budge, Zimmerman slips away again for Yaunde. He does not want a pitched battle of competing entrenchments, for he has no reinforcements or factories to feed an attrition battle. He would keep his enemies from linking up to surround him, and so he spends January attacking all of them in turn. 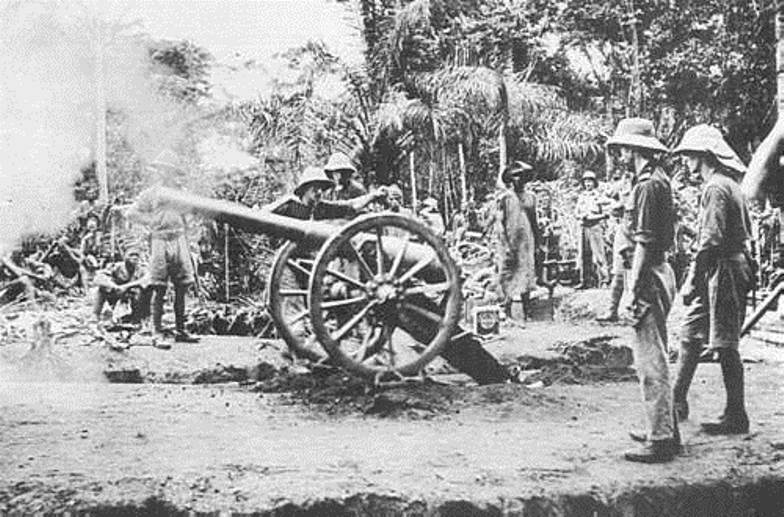 A British 12-pounder field gun in action at Dschang. Note the hole dug under the tow end to reach a higher angle of fire

Three French columns attack from east, north, and south, converging at Bania on the Upper Sanga River and taking Bertua, a town 175 miles from Yaunde. Zimmerman meets the combined force, led by three colonels, at Dume, knocking them back; he sends a second column south-east for N’Zimu, a town on the Sanga River, thus straddling his enemy’s primary line of communication to the south. There, the allies lack the armed river steamers that provided excellent fire support in the taking of Edea last October. Dug in, the N’Zimu contingent will maintain a stubborn resistance until Belgian troops march out of the Congo to dislodge them in a bloody three-day attack during February.

Despite having only one clear victory to his credit, Zimmerman has succeeded in being everywhere at once, keeping his enemies at bay for a while longer. He need only hold out until the rainy season to win a months-long respite. Yet without a German victory in Europe, his defeat is inevitable: machine guns need ammunition. Wounded and sick men need medicine. The allies have time on their side, they have him surrounded, and they have no lack of reinforcement or resupply. 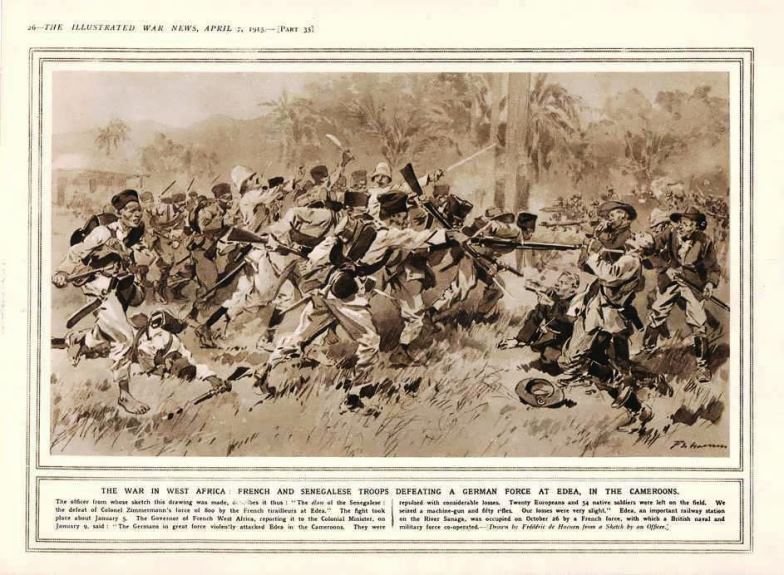 Illustrated War News, a publication of the Bureau of Propaganda, printed this rather fanciful visualization of the battle