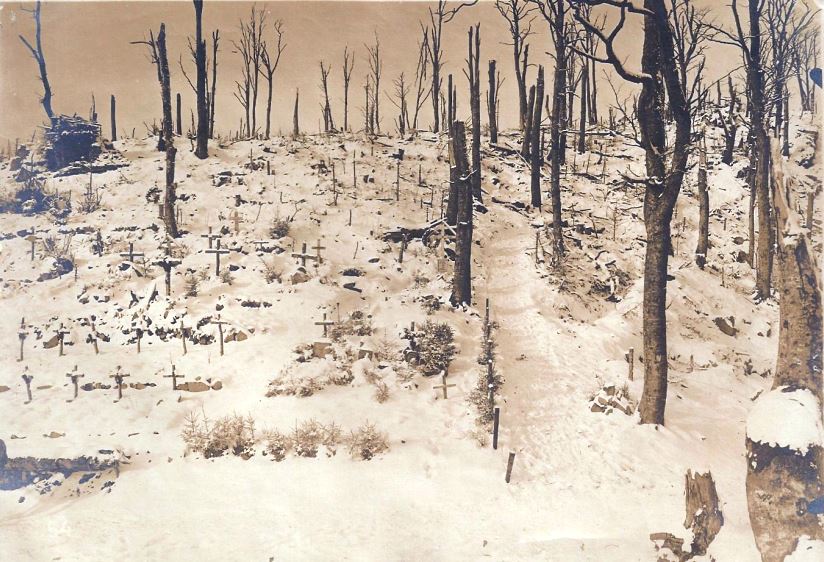 Supreme commander Joseph Joffre is pressing forward with the first major allied offensive since November, a series of limited attacks collectively known as the First Battle of Champagne, so there were no truces or soccer games in the Vosges Mountains on Christmas Eve. Instead, French troops stormed the peak of la Tête des Faux, taking heavy casualties to secure the observation point from which German artillery spotters had destroyed a French command post some weeks before. After successfully beating back counterattacks, the mountain has become a bastion of the French left flank facing the Fecht River Valley. The peak of Hartmannswillerkopf (also called le Vieil Armand) anchors the French right. Both mountaintops have been the object of German attacks ever since.

At a little before 11 AM today, German artillery begins pounding the defenders at the top of Hartmannswillerkopf, a peak south of Steinbach where 2nd Lieutenant Canavy commands a detached company of the 28th Light Infantry Battalion. After more than two hours of bombardment, an entire battalion of the 123rd Landwehr (reserve) Infantry Regiment attacks up the steep slopes, quickly discovering that the low-angle shrapnel and high explosives have had little effect. Dismissively called ‘tree monkeys’ (baumaffen), French snipers in the trees take a heavy toll on the ranks advancing uphill. The attack is abandoned before dark.

Due to the close cover of trees and rocks as well as the relative inactivity of this zone between September and November, the Vosges has not become a tangled web of trenches and barbed wire. With today’s attack repulsed and reinforcements bringing him to full strength, Lt. Canavy improves his defenses in a ring around the mountain peak, establishing a command post and supply points. He has nine days to prepare before the Germans return with crack troops — and a better plan. 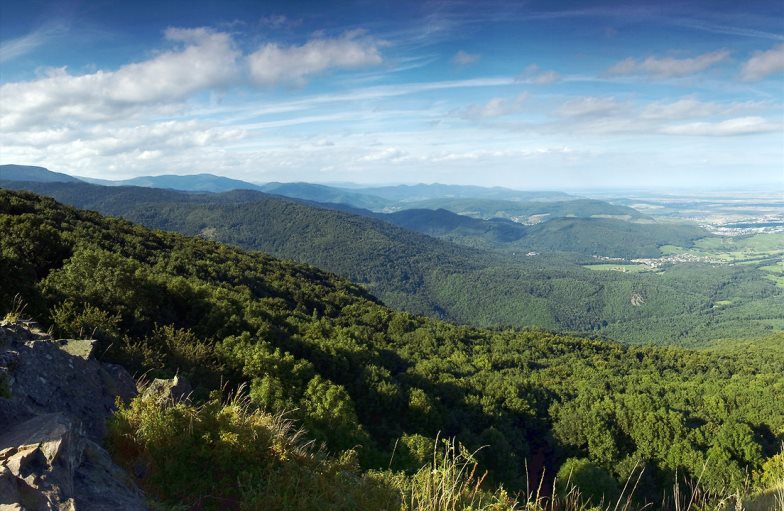 When they return, the Germans occupy both sides of the mountain and lay siege to the peak. Barbed wire and a Minenwerfer (7.8 cm two-wheeled mortar) throw back multiple attempts to relieve and reinforce 1 Company, 28th Battalion over three days. Turning the mortar’s high-angle fire against the mountaintop, they kill Lt. Canavy and wreck the defenses, but then the follow-up assault is repulsed with the last of the defenders’ ammunition. Down to just a third of their full strength, cut off from food and resupply, the Frenchmen surrender the next day.  The Germans, who have thrown all or some part of ten different units into their operations, are stunned to learn just how small the defending force has been all this time. Each side has lost more than a thousand men.

Now in control of the peak, the Imperial German Army sets out to fortify their position. Both sides will construct elaborate approaches, with access roads and first aid stations and shelters cut into the rock. Limited by a high command that wants French troops to remain on the offensive, the French Army never perfects its defenses here, but the Germans use hundreds of laborers to set up two cable cars for hauling food and supplies to the top, including the concrete necessary to build blockhouses and a parapet. Hartmannswillerkopf thus becomes the setting of some of the most elaborate defensive works of the Western Front in 1915; this mountain will overlook some of the fiercest fights as a sixty-mile curtain of fortifications grows up along the frontier.

Meanwhile, the mountainsides become host to a growing number of graveyards. Small, improvised wooden crosses are eventually replaced with monuments and memorials, but for the duration of the war most of the men who bleed to death in these valleys, ridges, and draws cannot expect better than a barely-marked, nameless, shallow hole in the ground. 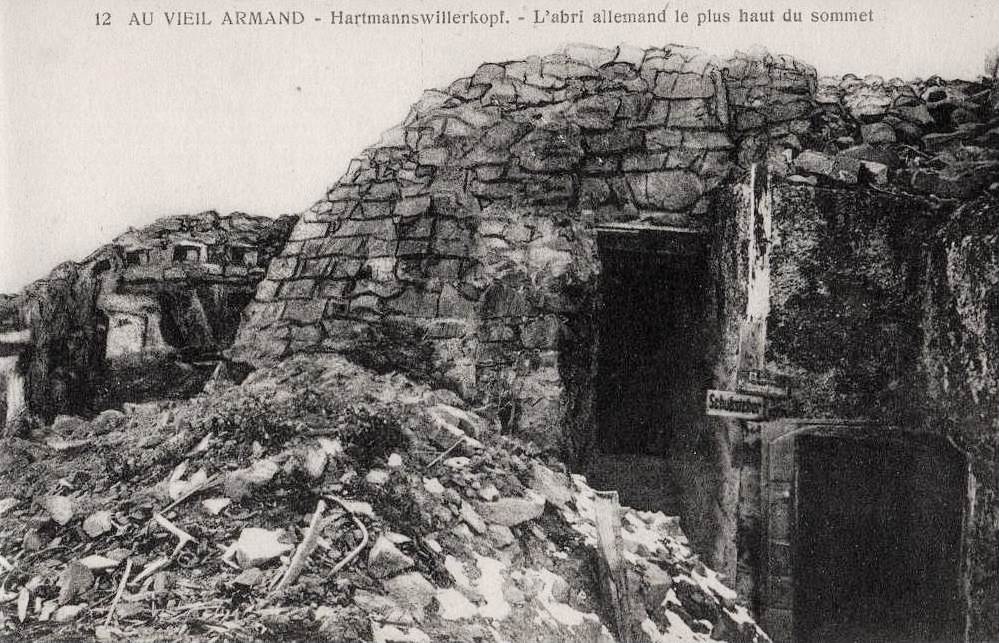 A postcard photo of German bunkers on the peak of Hartmannswillerkopf. Via DelCampe.net

Battles flare up at Reichackerkopf, Vallée de Metzeral, Sillackerckopf, Anlasswasen, Hilsenfirst, and other points throughout the Spring and Summer while observers watch from this peak, which occasionally burns from French bombardment. There is a learning curve to mountain warfare, and it is almost as steep as the mountains themselves. Operations in this terrain take twice as long, for a man may walk a mile up- and downhill in order to travel the same distance ‘as the bird flies.’

Shrapnel is almost useless in close tree cover, while the heaviest high explosives are ineffective without a high angle of fire. Both sides are critically short of high-angle ‘mountain guns’ useful in this terrain, and while the Germans have Minenwerfers along the Western Front, they don’t have enough of them here. Troops also appear on the battlefield wearing skis this month. Contrary to the popular image of the Great War as a conflict between hidebound commanders, it is a time of intense change and constant innovation. 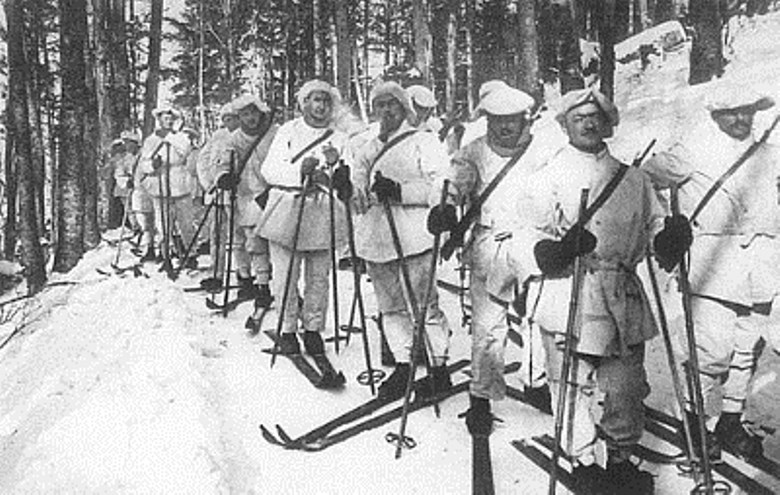