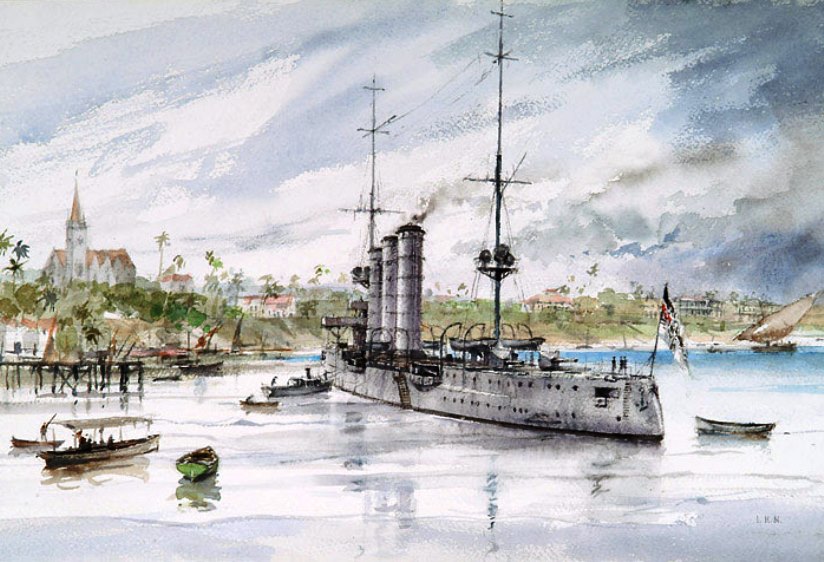 Of the Kaiser’s six overseas colonies, three — the Bismarck Archipelago of the Central Pacific, the Chinese port of Tsingtao, and Togoland in West Africa — fell before the end of 1914. Southwest Africa (Namibia) is cut off and soon to be invaded by the Union of South Africa, falling before the end of the year. Kamerun is besieged and their port city occupied; cut off, her defenders will surrender in 1916. But German East Africa, a territory that includes modern-day Burundi, Rwanda, and Tanzania, will be the last to fall with the Armistice. During this conflict, it is the House of War in Africa, the final colony that was never conquered.

The old battleship Goliath and the aged armored cruiser Fox hit Dar es Salaam, the capital of German East Africa, with shellfire today. It is not their first visit. First, the HMS Pegasus shelled the wireless station on August 8th, obtaining Governor Heinrich Schnee’s word to consider all ships in the harbor British prizes before moving on in search of the cruiser Königsberg. Chivalry and gentleman’s agreements quickly died, however, when the Königsberg sank the Pegasus in a one-sided engagement at nearby Zanzibar after being supplied coal out of the port. British ships returned in search of the German warship, firing on one of the boats in the harbor and demanding its wireless antenna be struck immediately.

The British Navy wanted to disable the engines of the interned boats. That mission, conducted in small craft launched from the Goliath on November 28th, resulted in an ambush by rifle fire and the death or capture of the shore party. Commander Henry Peel Ritchie will be awarded the Victoria Cross for guiding his launch to safety despite eight wounds during that debacle. Slow to recover from his grievous injuries, Ritchie will be invalided out of the Navy. The white flags which flew over the town during the entire incident were the final insult to British honor in East Africa. 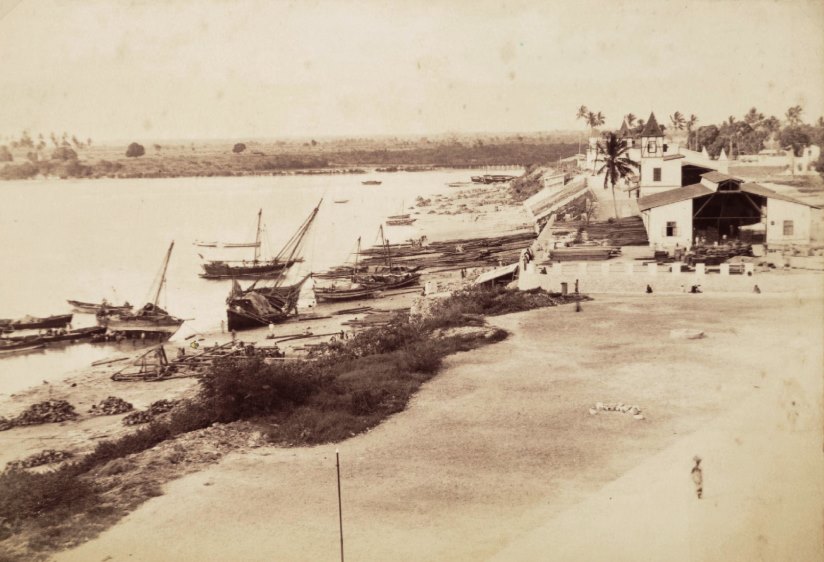 Today’s visit is therefore very different from previous British calls on the port. Beginning with the bombardment of boats in the harbor mouth from standoff range, the fire shifts to the town itself. It is worth noting that the crews and officers of the Goliath and Fox are surely aware of the recent outrage at Scarborough, where German cruisers indiscriminately shelled British civilians along a sixty-mile stretch of North Yorkshire coastline, and so this attack belongs to the new era of deepened hatreds and hardened hearts. Ostensibly aiming for ‘harbor defenses,’ they hit the railway station and tracks, the houses and workshops, and the streets.

Small craft enter the harbor with armed crews, taking fourteen European and ten African mariners prisoner. Any signs of resistance from the shore are answered with a chatter of rifle and machine gun fire. Upon disabling tall the engines of the seagoing ships, the sailors depart without any parley; they have delivered their message. One week later, the British Navy occupies Mafia Island. Lying across from the mouth of the Rufiji Delta, where the Königsberg is bottled up, possession of the island allows them to establish air supremacy over the Delta with an improvised airstrip and officially declare the East Africa colony under blockade.

The Goliath‘s big guns have forced Captain Max Looff back into the Delta out of their range, but those guns are needed elsewhere now. Freed up from her duties on station against the Königsberg, the old battleship will soon depart for the Dardanelles, where she and her crew will meet their own fate during the fiasco at Gallipoli. Recovering in England, Commander Ritchie experiences the unique guilt of survivors. 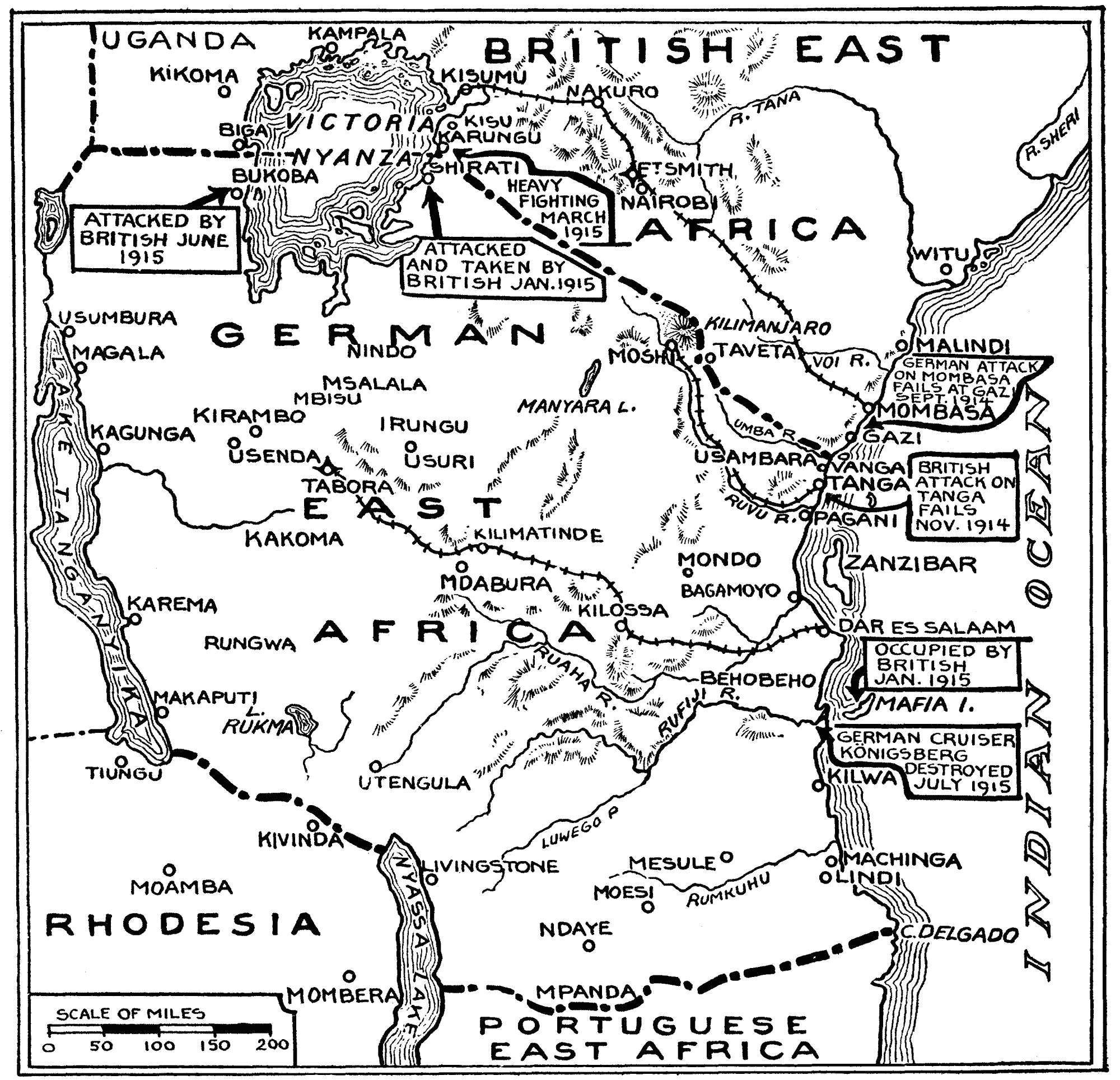 Map of the East India campaign to August 1915. Click to see larger version

There are two railroads across the German colony. The southern line begins at Dar es Salaam, crossing the middle of the territory all the way to Ujiji on the northern end of Lake Tanganyika, stopping at the central city of Tabora. Beginning at Tanga, the port city at the northern end of the colony’s 620-mile coastline, the other rail line hugs the bank of the Ruvu River to Moshi. These modern railways follow both of the ancient slave trade routes that once carried so much misery to Zanzibar and the Indian Ocean; they will be a prominent factor in the sustained resistance of the colonists and their native troops.

Both coastal cities are therefore natural targets for attack. Tanga has already been the scene of one abortive amphibious operation, and Colonel Paul von Lettow-Vorbeck, the man who commanded the victory, has won a power struggle with Schnee. The entire colonial population thus becomes even more determined to fight on as a result of today’s operation, which fails to ‘break the will’ of resistance. Lettow-Vorbeck plans a guerrilla campaign to avoid pitched battles, using his mobility to meet the enemy in strength as it suits him.

Yet the resistance of the Kaiser’s East Africa colony has as much to do with the remoteness of the location as any other factor. Dar es Salaam is a gateway to the farthest-flung theater of battle in the Great War; the city will fight on until 1916, but this is at least in part because the British Army lacks the troops and weapons at hand to do anything about Lettow-Vorbeck, his colonial volunteers, or his Askari mercenaries. Lettow-Vorbeck’s personal myth is built on his success at keeping a large British force pinned down in East Africa rather than the Western Front, but that force remains to even be built yet. For now, the British Navy is content to cut him off from relief with a blockade. 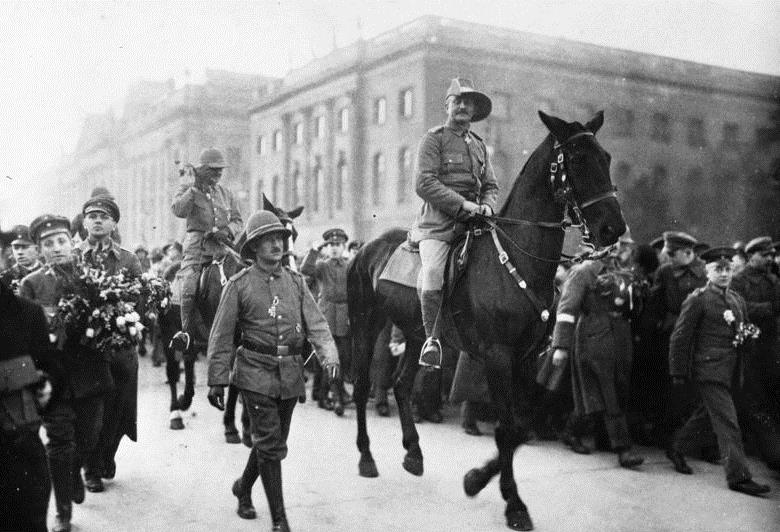