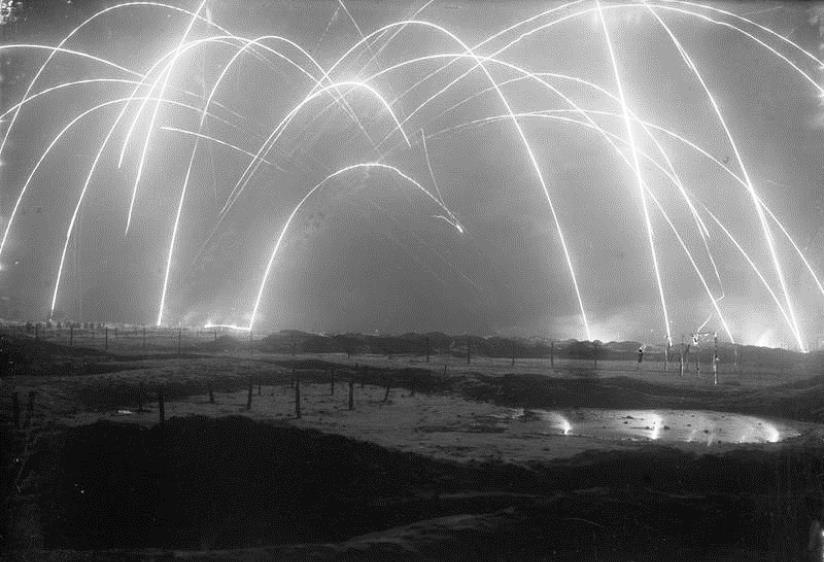 On the 151st day of the Great War, unit diaries record artillery duels all along the Western Front. Especially at the town of St. Georges, where Belgian and French troops have made gains in the last week, at Roye in the Somme River valley, around La Bassée in the bend of the German lines north of Paris, in the vicinity of the western fortress of Verdun, and in the Alsace region where France has won back ground in recent days, the year 1914 ends in a grand daylong symphony of counterbattery fire. On the Eastern front, there are artillery duels at Przemysl and in Poland, where the Central Powers are being pressed hard. A Russian victory in an artillery duel has even played a key role in recent fighting near Erdohan in the Caucasus.

During the first allied offensive since the Western Front became a single, continuous stream of death from the Swiss border to the English Channel, the guns of December have been the true Christmas bells of 1914. Their celebratory thunder drowns out any word of peace. It is the 1915 Overture, the crowning of a new King of Battle in the fire and blood of our modern world’s birth. Mars is ascendant, and the rhythm of guns has replaced the war-drum. These fireworks are not made to be pretty or holy, just patriotic, and they are responsible for at least three out of every five battlefield casualties of the Great War.

The artillery branch began the conflict subordinated to the infantry, lining up wheel-to-shoulder with them and suffering tremendous losses in direct-fire engagements. Everyone has since moved their guns behind the lines, where they have found their true calling as indirect fire weapons. A new nervous condition called ‘shell shock’ is emerging from the first battles of trench warfare, as minds are warped by the endurance of sustained terror inflicted by enemies they cannot see or retaliate against. Unable to answer nature’s call to flee or fight, some men are cracking under the strain. Many of these are dying before firing squads for desertion, an indication of artillery’s success at ‘breaking the enemy’s will to fight.’ 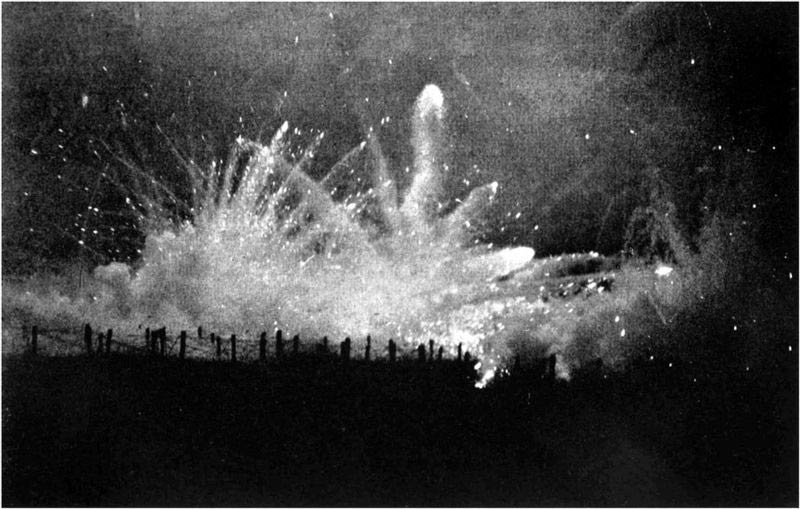 A German night barrage during Second Ypres. Enemy barbed wire obstacles were often targeted in support of an attack

Ten days ago, International Herald Tribune reported on a successful use of counterbattery fire in support of an attack: “In front of Arras the French artillery threw such a rain of shells into the enemy’s lines that no fewer than thirty-six cannon were silenced.” Finding enemy guns has become a primary intelligence mission. Every army adopts camouflage and artifice and digging to protect their guns.

Flash-ranging techniques dominate the night-fight: men learn to note the direction of muzzle flashes and the sonic time differential to triangulate and target enemy batteries — for shrapnel against crews, or high explosives to destroy the guns. Intelligence officers are already using balloons, airplanes, and the world’s first aerial reconnaissance photographs to locate the enemy’s artillery for suppression with artillery. These revolutions are by no means complete, but they have been in progress since October for all combatants, and the cumulative effect now shows.

With the heavier guns of August more prolific than ever despite the ongoing crisis of shell production, accurate field artillery has rapidly gained recognition as the most crucial element of battlefield success on all fronts. New and heavier guns have debuted on the field to support trench warfare with higher angles of fire and heavier payloads. The artillery branch is thus both perpetrator and victim of the very attrition battles and material crises that it has created — and the primary example of the Great War as a continuous churn of technological change amid the challenges of mass-production. 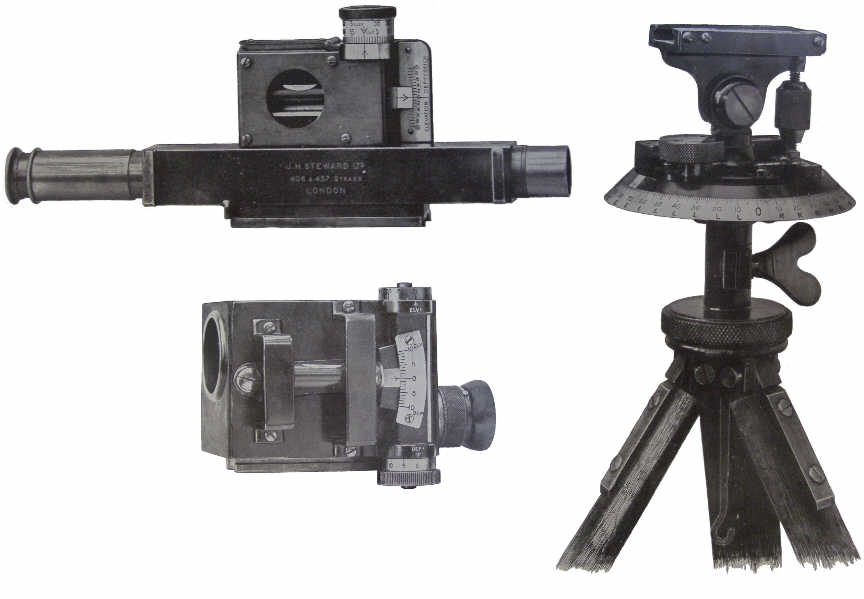 Issued in late 1915, the Number 4 Artillery Director incorporated many lessons of the first trench battles in its design

Indirect fire is virtually impossible without accurate maps. A variety of maps are being surveyed, proofed, and printed at various scales for all kinds of tactical planning in all the armies. As the initial improvisations and hand-sketches give way to best practices and best materials, the modern command center, where fire control, intelligence, and decision-makers are co-located around all the standardized maps necessary to conduct high-tech operations, is beginning to take shape.

But it is hardly an even revolution or an easy one. Britain’s army began the war without any tactical maps of France, forcing its generals to use bicycle and motorcar touring maps to navigate their way to their first battles. These were of course poorly detailed, and hardly useful for precision calculations, so the British Ordnance Survey has looked at French grid maps for their artillery. Unfortunately, the French maps are off from magnetic north by a half-degree — a fact that will not be understood until 1918, when a British magnetic survey of the Western Front reveals the discrepancy. These French maps show terrain elevations at ten meters, an interval that is woefully inadequate for tactical use. Belgian military maps are better, but do not extend into France. Royal Engineers have thus embarked on an immediate, crash re-survey of the entire British front, which includes parts of both nations, since November. Today is the early fruit of that labor, which drafted surveyors from the artillery corps to establish the basis for ‘map shooting.’

There are similar stories elsewhere. On the Eastern Front, where countermarches and combat often happened in a near-total absence of decent maps at first, there was an untold waste of shells during the transition to indirect fire. Yet the largest sources of shell waste are the shell factories themselves, which have severe quality-control problems from rapid production capacity increases. New workers are inexperienced, and new processes must be perfected and streamlined. Duds have been distressingly common at times, compounding the shortages that already affect operations on every level.

Solving the artillery crisis is a national imperative for every combatant; failure to meet these challenges will topple governments and inaugurate revolutions. The historical period of the 20th Century thus begins with this celebration for a new King of Battle. Princes and prime ministers will be crushed underneath his boots like so many tin soldiers. 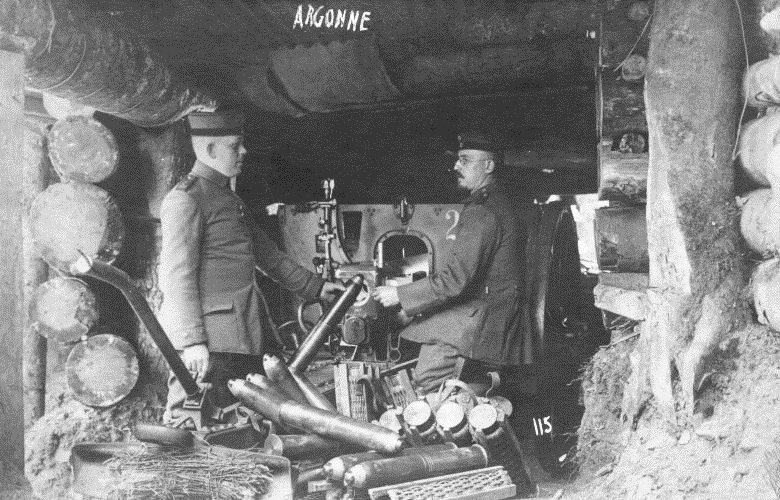