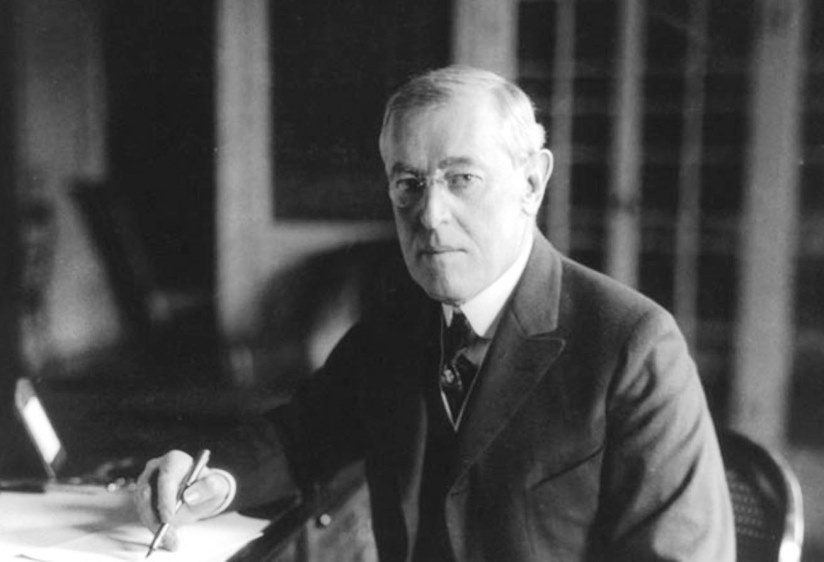 Today’s American newspapers report that the United States has presented a diplomatic letter to Sir Edward Grey, the Foreign Minister of Great Britain. Headlining the government-to-government missive as a “vigorous protest,” the press reports that President Woodrow Wilson personally “revised its phraseology with minute care.” In fact, his wording has turned the letter into diplomatic milquetoast. Populist firebrand William Jennings Bryan’s Department of State has been lobbying the White House to lodge a formal protest for months because London’s only response to Wilson’s informal complaints has been to further extend the list of contraband items.

The global economic shock of 1914 has hit the American economy hard. Even with the war over in most of the world’s oceans, the British Navy has nonetheless turned two of the world’s most profitable trade routes — through the North Sea into the Baltic, and across the Mediterranean — into blockade zones, inhibiting America’s business recovery. Wilson is not eager to anger his country’s largest trading partner, but she is strangling America’s trade with neutrals, not just belligerents. Ever since the British Admiralty declared the North Sea a militarized zone, requiring neutral commercial ships to stop in British ports for inspection, the British have seized an increasing amount and variety of cargo.

America’s last war with Great Britain ended just 99 years ago, and it has only been a half century since Britain came close to taking sides in the American Civil War over Abraham Lincoln’s blockade. Although Wilson is an Anglophile, there are still currents of anti-British sentiment in the United States, and he does not want to tear apart the country’s cosmopolitan social fabric by taking sides. America went to war with its parent nation in 1812 over causes very much like the ones in this diplomatic letter, but the core American values of free navigation and trade are running up against another bedrock American tradition: staying the hell out of European wars. 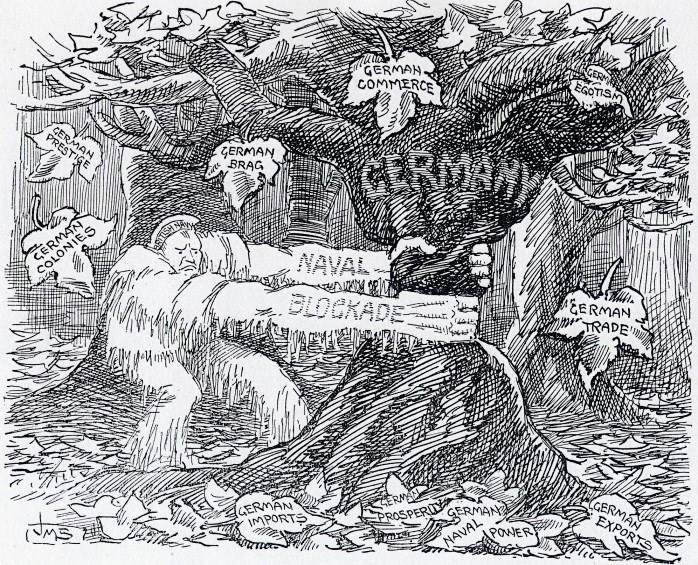 In the Grip of Jack Frost, a November 11 political cartoon referring to Churchill’s public statements about the blockade

Somewhat surprisingly, Wilson’s revised note is addressed to precisely the right person. The blockade is not being run out of the Admiralty, but the Foreign Office; Sir Edward Grey does not wear a uniform, but he is nonetheless in charge of Britain’s most decisive weapon of the Great War. Since late August, Winston Churchill and Sir Grey have invoked the rule of ‘continuous voyage,’ asserting the right to confiscate any cargo whose ultimate destination is Germany or Austria. Critically, this includes foodstuffs, and Britain alone gets to decide what the ultimate destination is.

Wilson wants London to do more than reimburse shippers for seized cargo. American transportation companies have already tried to follow the suggestions of Grey’s government by consigning shipments to ultimate end consumers at the point of sale, obtaining consular certificates, and trusting the British government’s good word, but cargo detentions have only become more common. Grey’s cold objective is to starve the Germans into submission; business interests must take a back seat.

One section of his wartime Foreign Office studies the economies of neutral countries that trade with Germany, determining how much of a given good the blockade can safely allow them to receive without permitting a surplus for Germany to buy. Another section uses Britain’s economic muscle to monopolize commodities; for example, Norway is estimated to need just fifteen percent of its fish catch for domestic consumption, so British commercial agents buy up all the rest. Coffee growers in South America still willing to export to the Central Powers soon discover the supply of Indian jute thread mysteriously cut off, leaving them unable to bag their beans. Grey’s most secretive section deals in espionage, with local agents identifying ships and shipments for interdiction.

It is a vast undertaking, and in the course of the war it will be the most decisive campaign of all, which is why the German Navy counters with their own blockade. 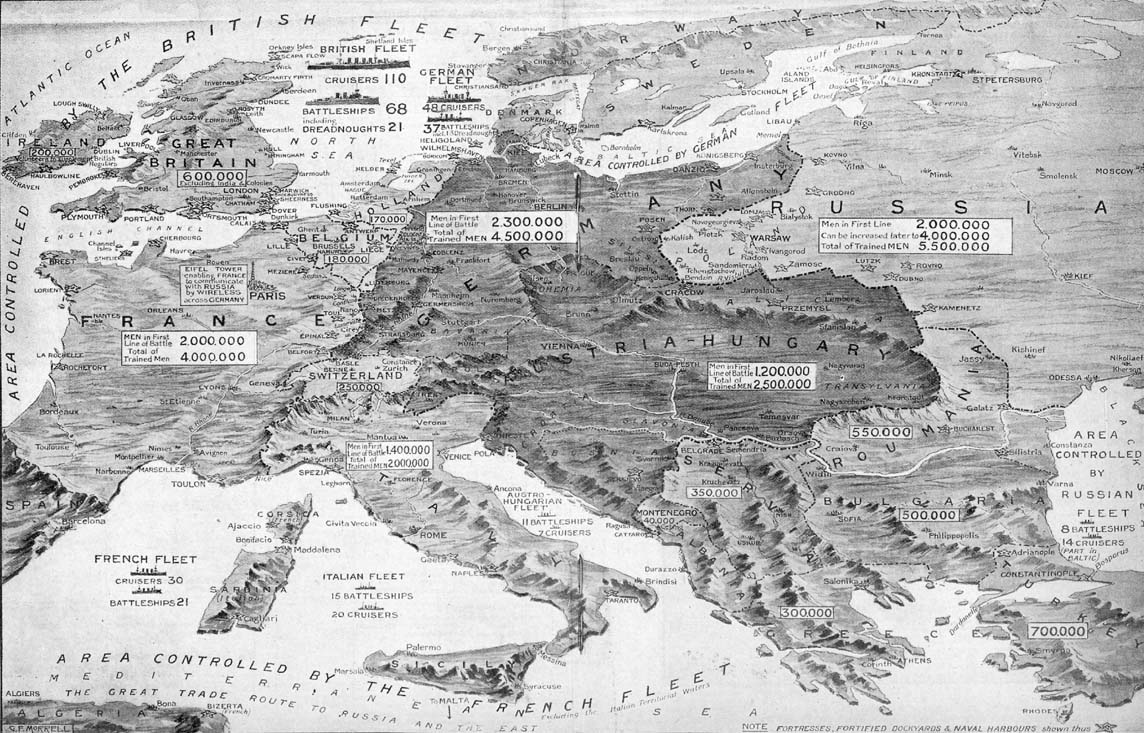 An attrition map of the Great War. Victory was understood in London as a mathematical function of population, calories, and production. In practical terms, Russia was also blockaded in the Baltic and Black Seas

Germany, which has fewer commercial or financial ties in America than England does, would love for neutral countries to complain loudly about Britain’s blockade. The Asquith government has made the Kaiser’s invasion of neutral Belgium its primary moral justification for the war, yet the effects of the blockade are already being felt by way of restraints on neutral trade. Direct trade soon ended with the declaration of war: Germany had developed Europe’s second largest merchant fleet in 1914, but by now all German commercial ships outside of the Baltic Sea are either captured, sunk, or trying to wait out the war in neutral harbors.

Although Germany has only been an empire for three decades, the nation had nonetheless become dependent on imports when the war began. Three quarters of the nation’s inbound shipping was raw materials for factories and fertilizer for fields. Only about five percent of German imports were finished goods; the rest was mostly food products and fodder. Germans will learn to do without many of these things, or else live with rationing and inadequate substitutes as they become strictly controlled by the state. The two most critical prewar military imports were cordite and saltpeter, the primary ingredients of explosives and ammunition.

In response, February will see the first wave of indiscriminate U-boat attacks on British shipping. Germany has her own networks, and the calls for retributive justice grow louder with each season of bad harvests and reduced calories. But by waging his own blockade on Britain with mines and torpedoes, the Kaiser very nearly brings the United States into the conflict, and in 1917 Wilson asks Congress for a declaration of war just weeks after Germany’s resumption of unrestricted U-boat warfare. The disparity of America’s responses to the two blockades has always been a source of discontent and controversy. Wilson’s insistence that seized cargoes are bad, but drowned passengers and torpedoed crews are worse, does not satisfy all historians. It certainly doesn’t satisfy the German government: as 1914 ends, all the essential elements of their defeat are already in place.