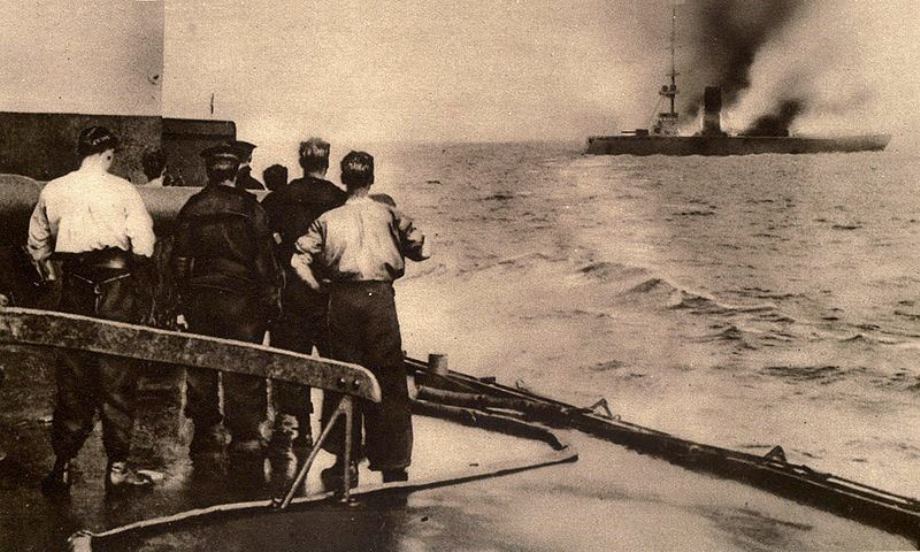 On land, these are actually the bloodiest days of the Great War. We tend to think of later trench warfare as the meat-grinder of this conflict, but in fact the trenches are dug by armies of men who are trying to escape shellfire, whereas the early battles are characterized by large units of men who willingly maneuver into position in the open field and then blast each other to pieces with machine guns and high explosives.

The war at sea has no trenches, but it does have ships full of men who willingly maneuver their vessels into position and then blast each other to pieces with the largest guns on the planet. The fact that this hardly ever actually happens during the Great War at all, let alone in these early weeks of the war, is an enormous frustration for sailors on both sides. Brits gripe that their enemy won’t come out to die like men, while the Germans chafe at being ordered to stay safe in port at Wilhelmshaven, in Heligoland Bight.

Few prewar tensions have exceeded this rivalry between an old empire and a new one. The British navy has centuries of proud tradition, and in recent years the nation has spent a quarter of its total budget on the world’s largest and most modern ships.  In fact, the Grand Fleet is so big that it needs the largest defensible anchorage in the British Isles at Scapa Flow just to park all together in one place. And Admiral Alfred von Tirpitz has enjoyed great success at convincing the Kaiser to fund an expensive peacetime expansion of the empire’s surface fleet, but the deep drafts of his battleships keep them in port during low tide.

Denied their great showdown, both sides will try to turn the situation to their advantage; today is the British navy’s turn. 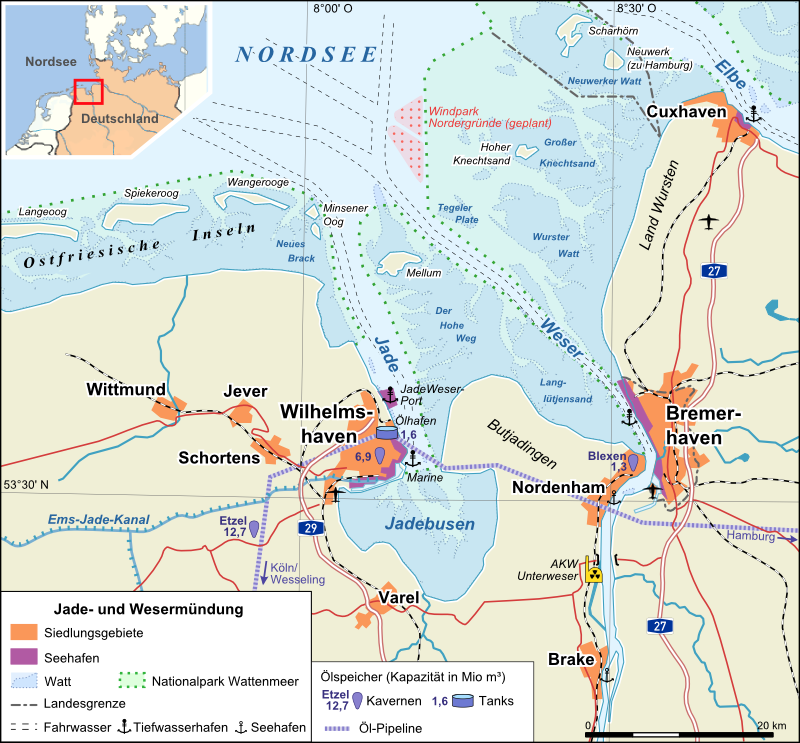 A bight is a curving shoreline; Heligoland is an island on the northern end of the Bight, near Denmark. This map shows modern shipping channels that were too shallow for the Kaiser’s battlewagons at low tide

But when Admiral Jellicoe finds out about the plan, he insists that armored battlecruisers be sent as insurance under Admiral David Beatty. News of this decision only reaches the plan’s author, Commodore Reginald Tyrwhitt, when he is already on his way to the fight; the submarines which have been chosen to bait German ships out into the sea actually fire on Beatty’s ships when they arrive just after noon, thankfully missing targets that they have mistaken for Germans.

Jellicoe’s instinct has been correct: Tyrwhitt, whose flagship limps home listing badly at the end of the day, needs rescue. The German ships are outnumbered and outsized, but their crews are disciplined, and their gunnery is frighteningly accurate.

The Frauenlob, a German light cruiser damaged during the battle

The action begins at 7 in the morning after the Germans spot the British submarines as planned and send eight cruisers to respond over the next three hours. Ships of the era don’t start quickly; they must heat up their boilers before they can move. The response is therefore uncoordinated, leading to a series of actions instead of a single battle. This works to the advantage of the British task force.

At 8 o’clock, the Frauenlob and Stettin engage the attackers when suddenly, all but one of Tyrwhitt’s guns aboard the Arethusa jam. It is not the only shortcoming revealed by this battle: some British fuses fail to explode, nullifying good gunnery. Nevertheless, the Frauenlob retreats after its command deck takes a direct hit, killing the captain and 37 crew.

Then five German destroyers arrive from patrol. Tyrwhitt’s task force traps one and sinks her, but abandons the rescue of survivors when the Stettin reappears. In a notably gallant episode, British submarine E-4 surfaces shortly thereafter to rescue the stranded British sailors, take three German officers captive “as a sample,” and give the remaining German sailors a map and compass so they can get to shore. 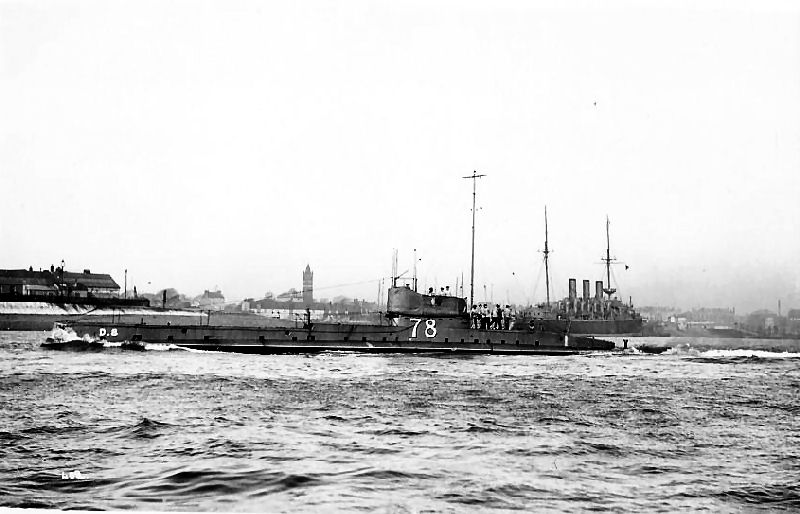 Though not a factor, both sides had submarines in Heligoland Bight that day

Then the German Mainz charges at the British destroyers, damaging three in a whirlwind of accurate gunnery before her propulsion takes a torpedo hit and she becomes a sitting duck. Tyrwhitt’s ships pour fire into her, turning her into a smoldering wreck (see top photograph). When it is clear that the Mainz is done for, they send boats to rescue the survivors, including Admiral Tirpitz’s son. After ten o’clock, three more German cruisers are spotted approaching, and Tyrwhitt finally radios Beatty to come to his rescue with the battlecruisers. They arrive and pour fire on the Koln, sinking her with only one survivor.

With the tide coming in, the task force finally retires. The Kaiser has lost three light cruisers and a destroyer; the British ships are damaged, but only 35 British sailors are dead compared to more than seven hundred Germans. In reaction to these losses, the Kaiser orders the fleet to avoid any action in which it does not expect a high chance of victory. Disheartened by the order, and by their inability to respond to the British challenge on their doorstep, his sailors’ morale begins a long decline. At the war’s end, they are the ones whose revolt finally pushes the Kaiser to abdicate his throne.

This surface battle has one more important, and even perverse, effect: for the duration of the war, submarines will be Germany’s primary naval weapon, used to duplicate Britain’s blockade of their seagoing commerce. Present for this battle, they are not a factor in it, but it is safe to say that their part in the war will prove far more consequential than either surface fleet. 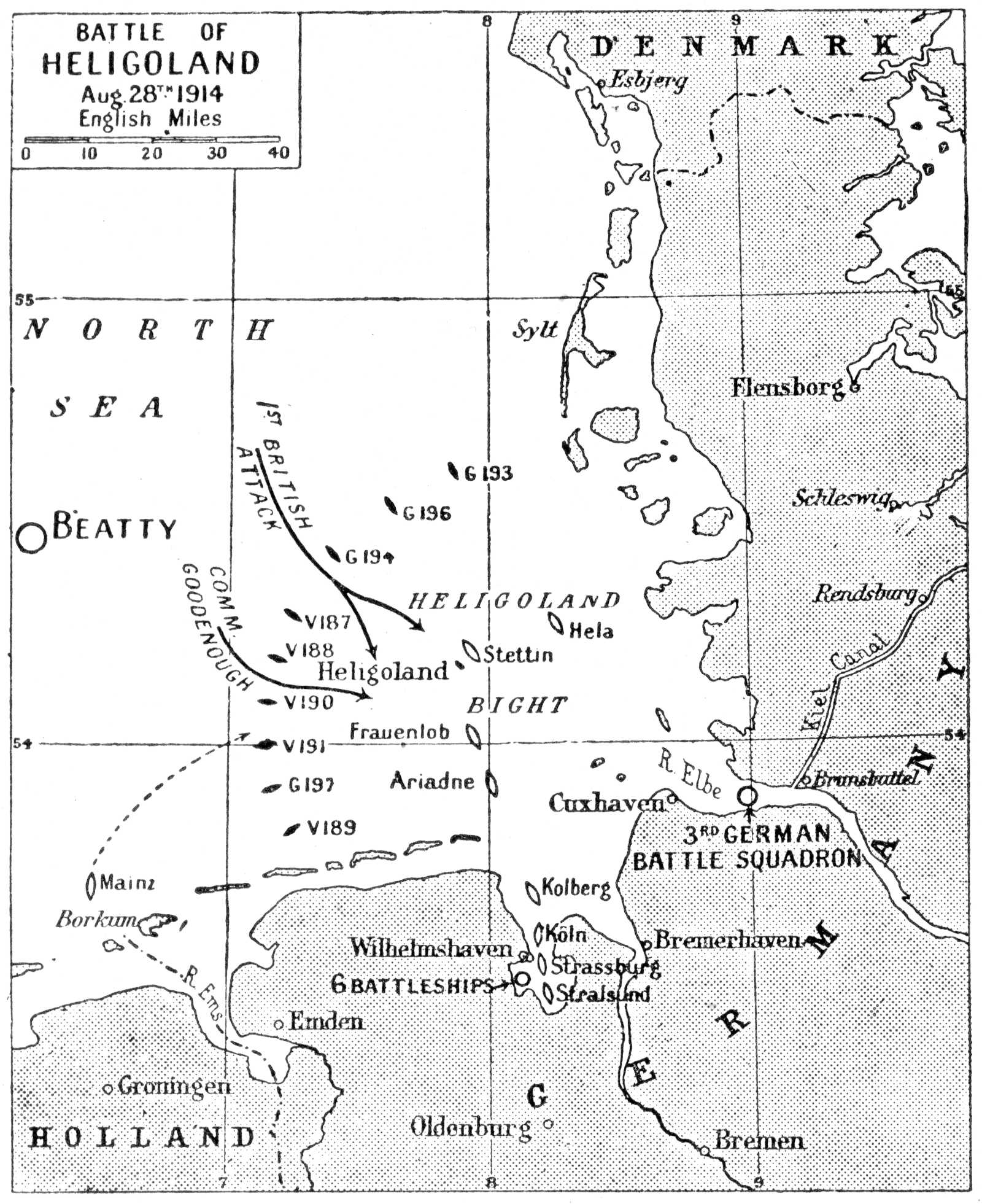 Map of the Battle of Heligoland Bight. Via Probert Encyclopedia