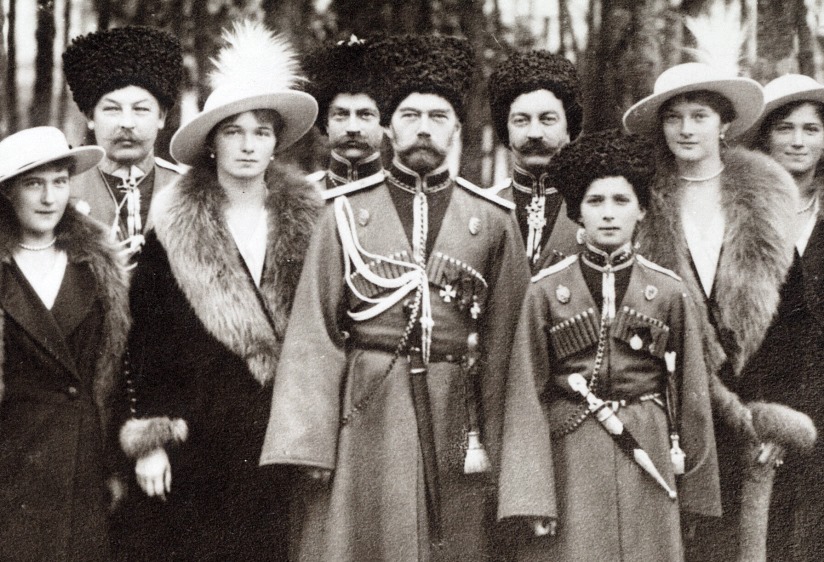 During their first two battles in East Prussia, the Russian Army consumed 1.5 million rounds of ammunition, a rate that would inevitably outstrip Russian production and transportation capacity in a matter of weeks. All the powers at war are experiencing shell shortages from the same strategic error: having planned a short, victorious war, none of them are able to meet the demands of a long one. The French ambassador to Petrograd, Maurice Paléologue, had warning of the shell crisis from French supreme commander Joseph Joffre three months ago, and passed it on to Minister of War Vladimir Sukhomlinov.

“General Sukhomlinov has assured me a dozen times,” I said, “that all precautions had been taken to secure that the Russian artillery should always have an abundant supply of ammunition… I have emphasized to him the enormous consumption which has become the normal scale of battles. He has vowed that he was in a position to satisfy all requirements and meet all eventualities. He even gave me written proof. Please mention the matter on my behalf to the Emperor.”

Tomorrow, Paléologue visits Mikhail Beliaev, the Army Chief of Staff at the Ministry for War, and finally gets his alarming answers.

Our losses in men have been colossal, though if it were merely a matter of replacing wastage we could soon do so as we have more than 800,000 men in our depots. But we’re short of rifles to arm and train these men. Our original reserve was 5,600,000 rifles; at least we thought so. The Grand Duke Nicholas thought so; I thought so myself. We have been criminally deceived: our magazines are nearly empty. Forgive me for giving no further explanation of a very painful matter. To make good the deficit we are about to purchase a million rifles in Japan and America and we hope to arrive at an output of one hundred thousand a month in our own factories. Perhaps France and England could also let us have a few hundred thousand. The position is hardly less difficult as regards gun ammunition. The consumption has surpassed all our calculations and anticipations. At the beginning of the war we had 5,200,000 rounds of 76 mm. shrapnel in our arsenal. Our entire reserve is exhausted. The armies need 45,000 rounds per day. Our maximum daily output is 13,000: we hope it will reach 20,000 about February 15. Until that date the situation of our armies will not only be difficult but dangerous. In March the deliveries on orders we have placed abroad will begin to arrive; I presume we shall thus have 27,000 rounds a day about April 15 and 40,000 after May 15… . That is all I can tell you, Monsieur l’Ambassadeur. I have kept nothing from you.

Beliaev himself is an example of the prewar corruption and regime mismanagement that are only now being exposed by the Great War. A favorite of the Tsaritsa, he is too weak-willed to lie to Paléologue like Sukhomlinov, but too fawning in his adoration for the royal family to be dismissed for incompetence and lack of spine. Tsar Nicholas II is quite aware of these material and personnel problems, but makes no move to fix them himself. Paléologue must urge him to fire Sukhomlinov, and even then the problem remains unsolved.

Russia is an autocracy, and the autocrat seems blissfully disconnected from his greatest crisis. 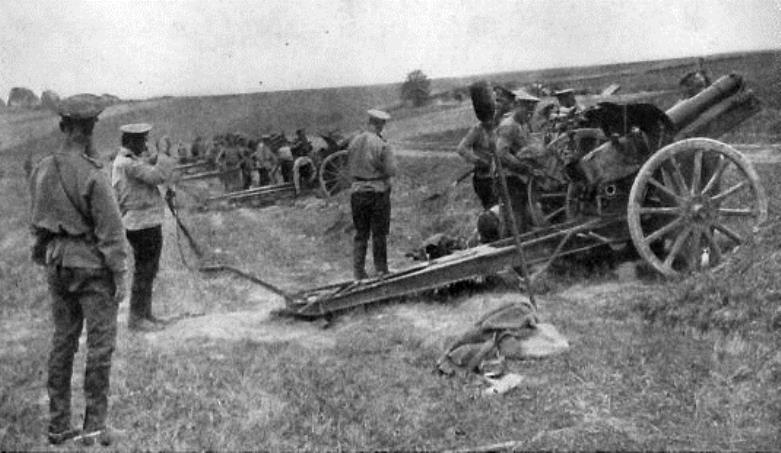 Russian field guns in Galicia. Note they are sited on a reverse slope, using indirect fire — telltale signs that professional gunnery officers are in command. Russian artillery had no shortage of training, but lacked ammunition

Russian expectation of foreign shell and bullet supply faces three key limits. One is the Winter ice that encloses the port of Murmansk. The second is that Russia’s Baltic ports are cut off by the German Navy. Finally, the allies are all suffering the same shortages and limiting factors; the words ‘per diem,’ which allow British gun crews just six shells a day, then eight, then ten, have equivalents in every language now at war. The day after his interview with Beliaev, Paléologue buttonholes Prime Minister Ivan Goremykin at the Tsar’s birthday party, and he seems perfectly aware of these limits:

“But there’s the same shortage of munitions in France and England as well! Yet your industries are far better equipped than ours and your machine-tool industry is on a far higher level! And how could anyone anticipate such a prodigal expenditure of ammunition?”

Russian expectations of support are unrealistic. French and British factories are unwilling to take orders for some time, and charge a premium when they finally do. Not that Britain and France aren’t trying to help: preparatory operations for the disastrous Gallipoli campaign have already begun, and the shell crisis is just one primary material motivation behind it. To supply Russia with the means for total war, they need access to a Russian port that does not close for Winter. 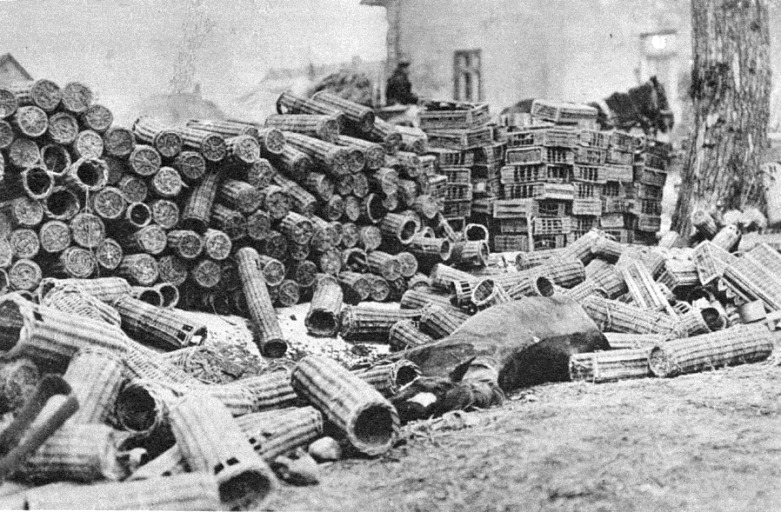 Stacked ammunition baskets left behind in a Russian retreat. Seemingly-limitless supplies of horses and men were not enough to overcome the shortages created by bad policy and worse strategy

In the decade since the war with Japan caught the Russian Army unprepared, Nicholas has failed to answer the challenges of incomplete industrialization, abysmal organization, frustrating incompetence, and endemic corruption that plagued his military at the time. Now the same issues are manifesting again in a country that is ill-prepared for prolonged conflict. Despite the delivery of 1.2 million shells to Murmansk in 1915, Russian railroads and rail engines are inadequate to the task of hauling them to the front in time to affect outcomes.

Rather than address these problems in an effective or systematic way, Nicholas insists that a ‘new energy’ is all that his country needs. To that end, he has shut down the state vodka monopoly, ensuring the sobriety of workers and soldiers. The results are disastrous, for he not only stirs public resentment with unfair enforcement, but also puts an enormous dent in state revenues at exactly the moment that he must finance a war driven by factories. It will take a year for Russian production to ease the shell crisis, and during that time hundreds of thousands of Russians will die in battle, many without ever having been armed to fight back. 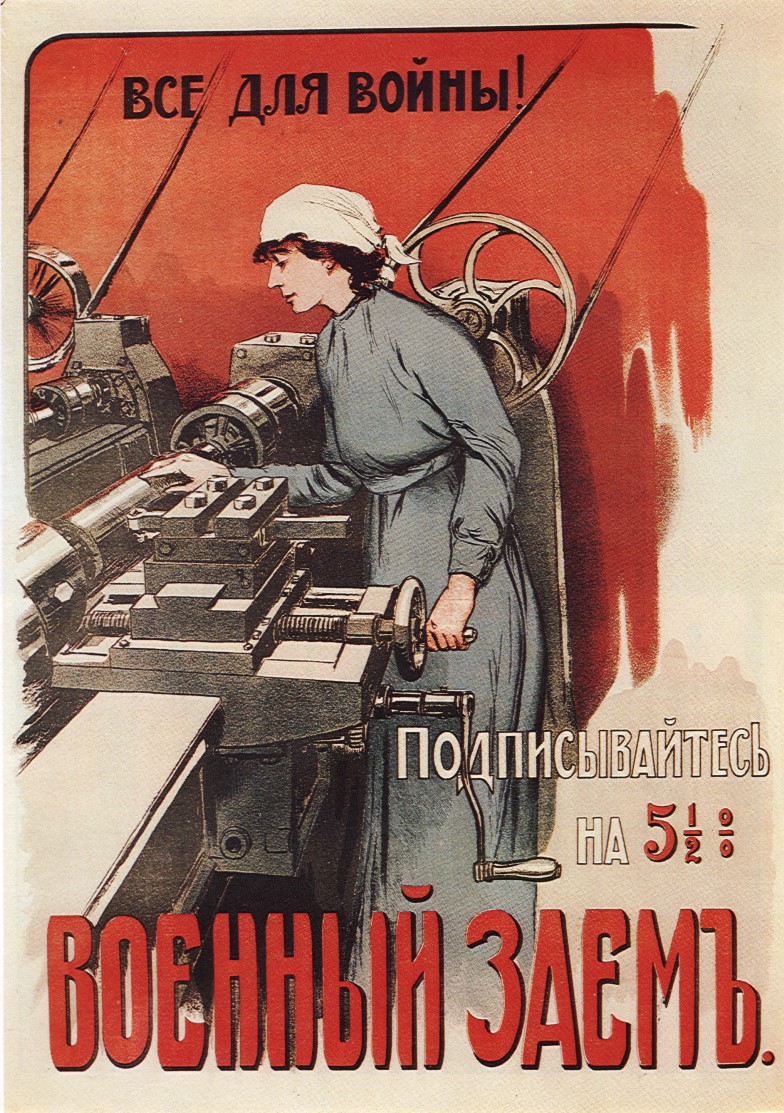 A Russian War Bonds poster. Note that themes of social and industrial progress are not exclusive to the West