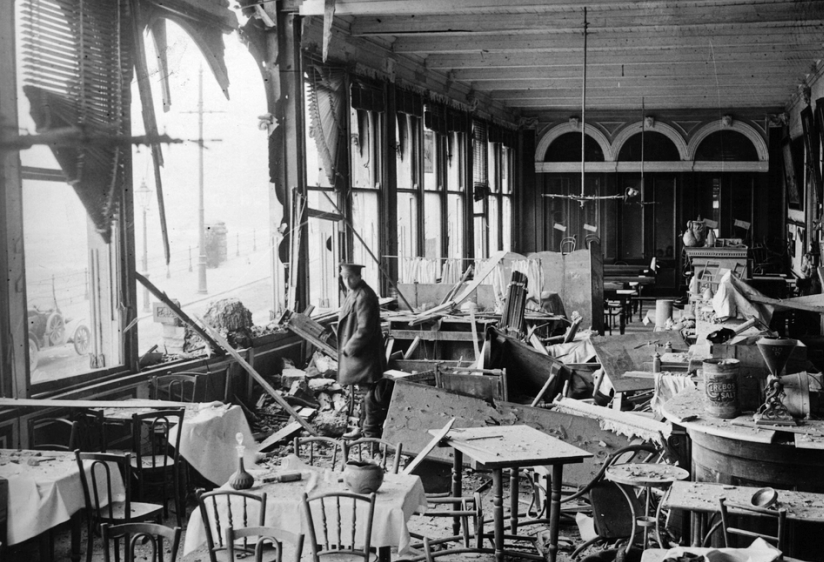 The sleepy harbor town of Scarborough is very old, but has flourished as a resort during the last half-century of Victorian economic growth. Town residents are awakened just after 8:00 this morning by a series of blasts that sunder the rainy, gray sky and shatter the calm breakfast hour. Vice Admiral Franz Hipper’s cruisers pass back and forth three times, firing more than 500 shells. The coastguard station on Castle Hill is destroyed, but only one round aimed at the wireless station lands anywhere near its target. The rest of them fly on into the town, shattering buildings and churches and shops and the town hall. Then the flotilla moves north to bombard the seaside town of Whitby.

They are one squadron of the twenty-seven German vessels now attacking four towns along a sixty mile stretch of shoreline. Interviewed later by the Independent, teenage apprentice Norman Collins recalls “a tremendous explosion rocked the house followed by an inferno of noise and the reek of high explosives.” Running outside, he is “amazed to see three huge, grey battle-cruisers which looked to be only a few hundred yards from the end of the breakwater. Their massive guns were firing broadsides and in the dull light of a winter’s morning it was like looking into a furnace.”

Hipper’s first raid on Yarmouth six weeks ago killed no civilians, but today’s operations will leave 137 dead and more than 450 injured. Although his ships fire thousands of shells during the ninety minute raid, they do remarkably little damage to legitimate military targets. The Scarborough Mercury reports of the attack on Whitby:

The great majority of the shots had passed over the East Cliff, and fell half a mile further on in the region of the railway station, where nearly all of the material damage was done. Here, in the Fishburn Park district, houses were wrecked right and left, and here it was that the second fatality occurred. Wiliam H. Tunmore, a railwayman employed on the North-eastern Railway, was the victim. He was driving a horse and cart at the Bagdale crossing near the railway station when a small shell struck him and killed him on the spot, though the horse was absolutely uninjured. He was sixty-one years of age, and a married man, his home being in Grey Street. The only other case was that of an invalid lady, Mrs Miller, of Springhill-terrace, who was hit in the side by a piece of shell while she was lying in bed.

The shock sends panic-stricken people fleeing into the country, sparks a surge of volunteers at recruiting stations across Britain, and stirs the British propaganda machine to its shrillest rhetorical heights. While the German government defends the raid as a justifiable act of war, it is arguably one of the greatest strategic blunders of 1914. Indeed, this day is filled with blundering from end to end. The war has turned nasty, for chivalry has given way to rage and hate and fear, and in their desperation to end the conflict quickly, the men who make the big plans are also making big mistakes. 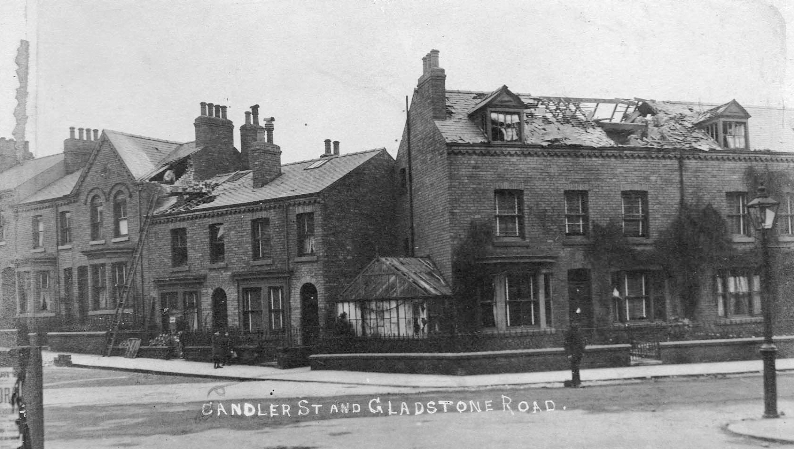 Shell damage to civilian homes in Scarborough. Hundreds of houses were damaged

The raid is an attempt to draw the British Navy out of its ports and into an ambush set by the battlewagons of the Kaiser’s High Seas Fleet. As he turns his command out to sea and beats for home, Hipper does not know that Admiral Friedrich von Ingenohl has already withdrawn four hours ago in the mistaken belief that a smaller force of British battleships approaching him was the vanguard of the entire Grand Fleet. Caught between the Kaiser’s orders on the one hand to avoid any battle in which he does not have a decisive advantage, and a mission profile that requires risk on the other hand, Ingenohl has defaulted to the safest option and missed his chance to greatly alter the balance of naval power in the North Sea.

The British press also criticizes the Navy for not preventing the raid — a charge that is more valid than they know. Only after the war will the British people learn that ‘Room 40,’ the cryptanalysis unit at Whitehall, was able to intercept and decode fleet signals to Hipper before his ships left Heligoland Bight. Rather than try to intercept Hipper, the Admiralty chose to position its own battlecruisers to entrap the German cruisers and destroyers in the channels between their minefields after the raid. But the very limited visibility of foul Winter weather on the North Sea leads to further missed opportunities as neither group manages to actually find the enemy. Furthermore, Room 40 never hears the High Seas Fleet making for Dogger Bank, either, so the Admiralty is completely unaware of the near-disaster their heaviest flotilla almost suffers.

Shore batteries do return fire with some effect, forcing the armored cruiser Blücher to pass behind the lighthouse. Ships do sortie against the attacking vessels, but for little gain: the light cruiser HMS Patrol is forced aground after taking damage from two shells, while the submarine C9 gets out of harbor by diving under fire — only to find the enemy already gone when Captain Bruce comes back up to use his periscope. The Admiralty intercepts a radio transmission from Ingenohl’s ships as they return to Heligoland, but interprets it as the High Seas Fleet coming out rather than coming home; as a result, Admiral Jellicoe spends all of the next day fruitlessly seeking a major battle in the North Sea. 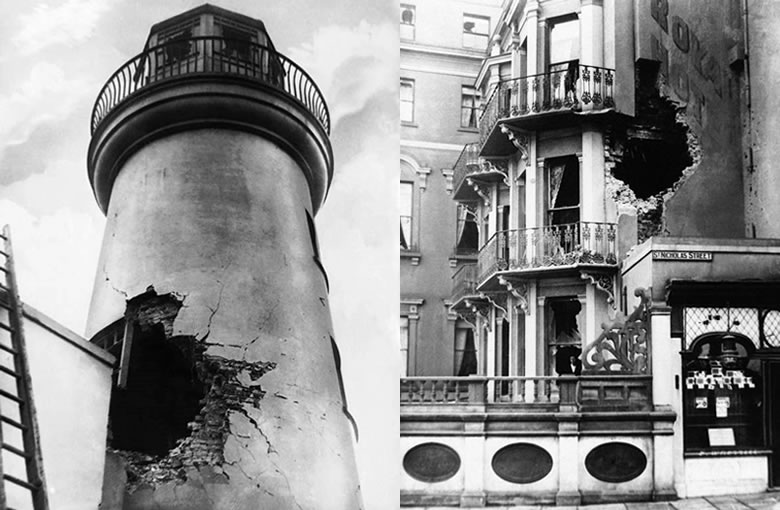 Left: shell damage to the lighthouse. Right: the exterior of the Royal Scarborough Hotel

It is the beginning of the age of total war.  Today’s attack is denounced as an act of terrorism, and indeed German military planners suppose they can demoralize the people of Britain by making them feel vulnerable. Writing to a relative at the end of the month, Captain Walter Freiherr von Keyserlinck of the SMS Lothringen speaks to this view in demanding an unrestricted U-boat campaign against British commerce: “Unless war is made something real for the Englishman in his own country, this robber and murderer will not recognize what it means for other people.”

This turns out to be a terribly misguided approach. Instead of cowing people, the words “Remember Scarborough” will appear on countless recruiting posters, and Winston Churchill will immediately capitalize on the deaths of children by taunting the Germans as “baby-killers” — a phrase that will be repeated by the press throughout the war. Whereas few Britons bore Germany any real ill will in August, by December there is genuine conviction in most hearts that Germans deserve to suffer for their crimes, and that their cities ought to burn as well. 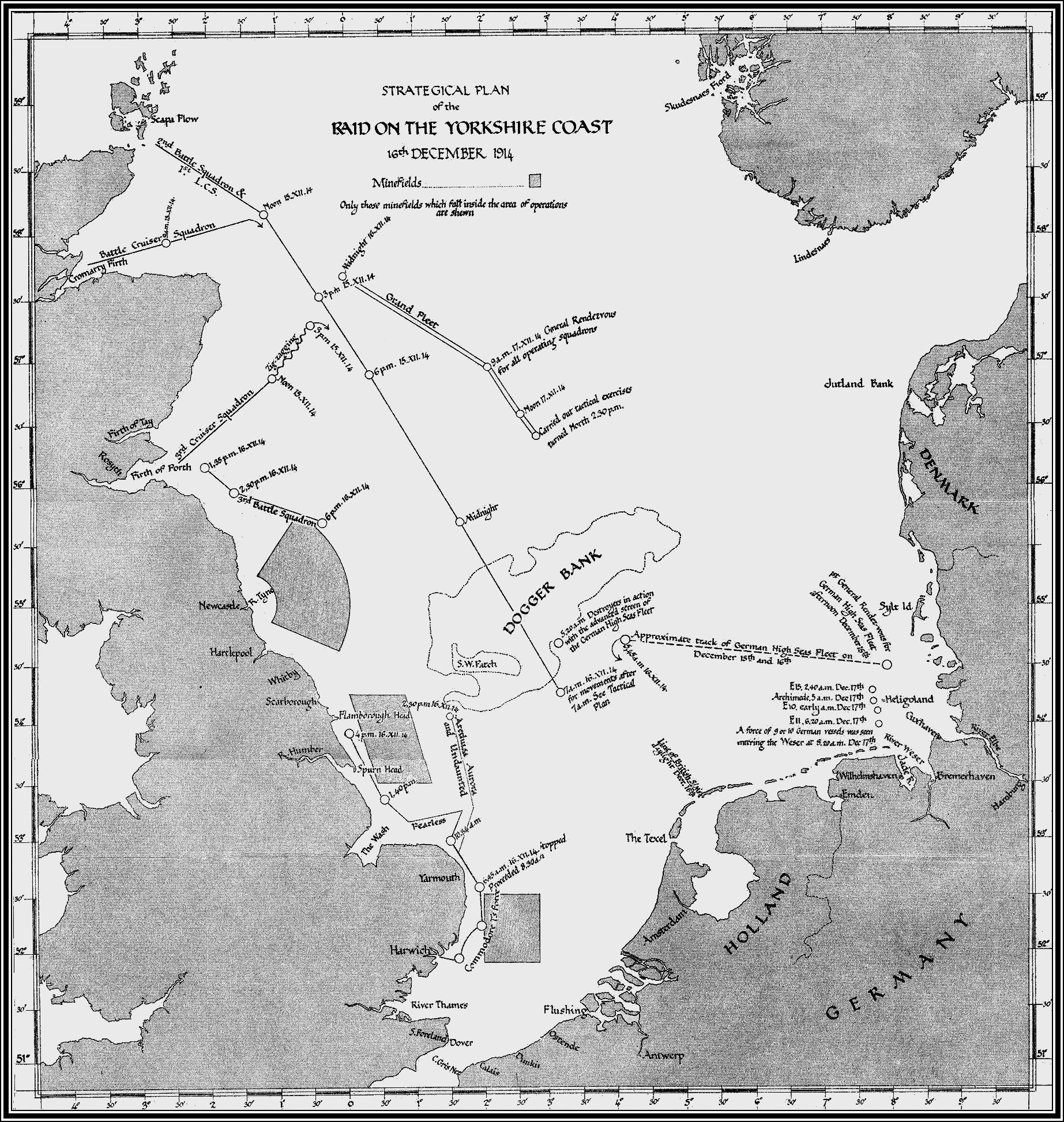 A map of the day’s operations from the British point of view. Click to enlarge