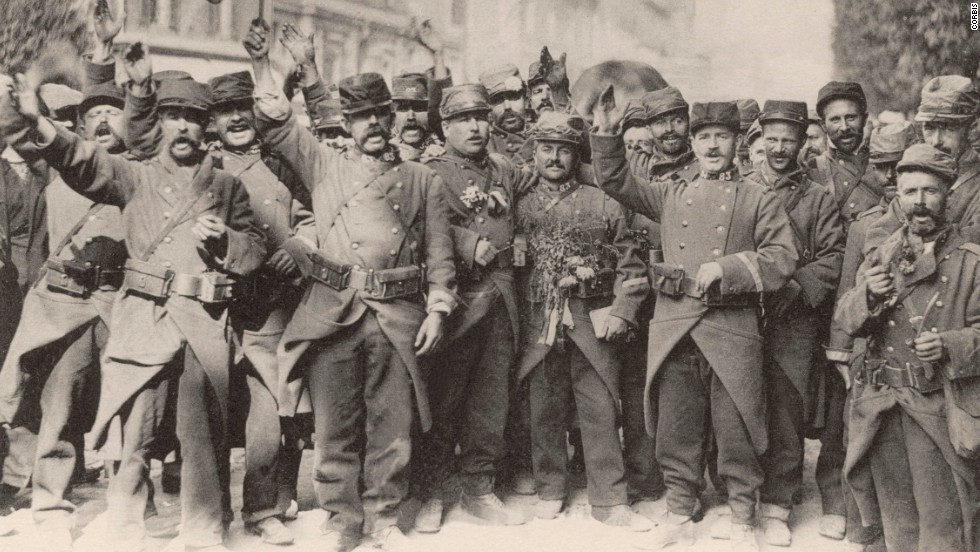 Near the Belgian town of Casteau stands a marker commemorating the spot where Corporal Ernest Edward Thomas became the first British soldier to fire a shot in the European war today. Across the road stands a restaurant with a plaque commemorating the spot where Canadian troops halted their advance on the day of the Armistice. These are the benchmarks by which we might judge the sacrifice of thousands of French soldiers who die today in one of their country’s most infamous defeats: it will take four years, and millions more deaths, just to regain what is lost here, with what seems like the entire world’s help.

France’s 17th Army are all men of Toulouse and its neighboring provinces. Dressed in red wool pants and blue jackets, they have marched a long morning in sweltering Summer heat under heavy packs when they encounter the enemy at Bertrix. Despite skirmishes along the line of the River Sambre yesterday and a pitched battle due west at Charleroi, both sides are surprised by the early-afternoon encounter.

In fact, the first men of the 33rd Infantry Division are still in march formation and stretched out along a narrow forest road when the rearguard comes under fire from Germans holding the ridge between Bertrix and Ochamps. At almost the same time, the vanguard emerges before the Germans defending the town and comes under murderous fire from artillery and machine guns. The advancing column is quickly decimated. 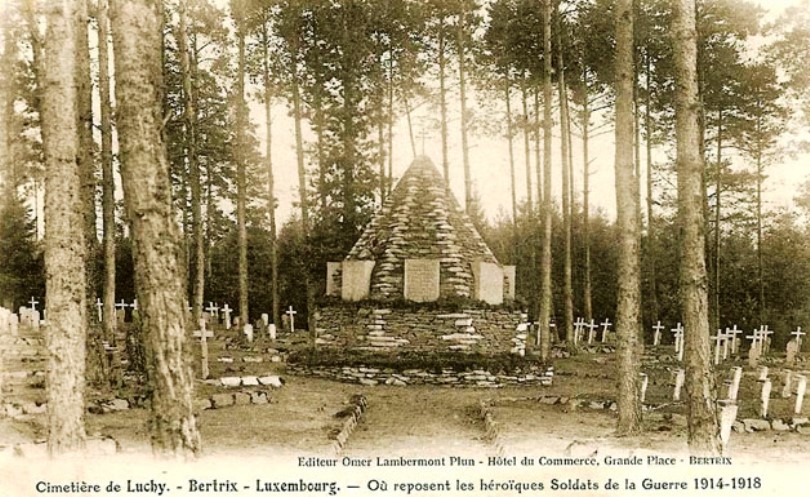 In a sign of how little reconnaissance everyone was doing in August 1914, the commanding general and lead elements of the French 33rd Division have no idea the Germans have already occupied Ochamps and are cutting them off at the rear via a secondary road through the Forêt de Luchy. The Germans aren’t aware of these developments either, but adapt more quickly than the French. Hammered by German counterbattery fire, the 33rd’s field artillery batteries are never in position throughout the entire battle, and unable to give the advancing infantry any covering fire. The division’s batteries lose all but 9 of their 36 guns today; the rest are destroyed or captured.

Regrouping from the forest road disaster, the remnants of the 1st Battalion link up with three more that have not met the enemy yet, and advance on Ochamps from the Southwest. Although they are able to approach the town through terrain that masks their movement, the German 87th Infantry Regiment stops them with withering fire from six machine guns and two artillery pieces whose crews quickly move into position and fire over their open sights at the attacking French.

To make matters worse, a farmer has divided the field with barbed wire that slows up the infantry’s advance, a preview of the slaughters to come in ‘no man’s land.’

Forced to retreat, many of the division’s regiments suffer 50% casualties and are left unable to fight. 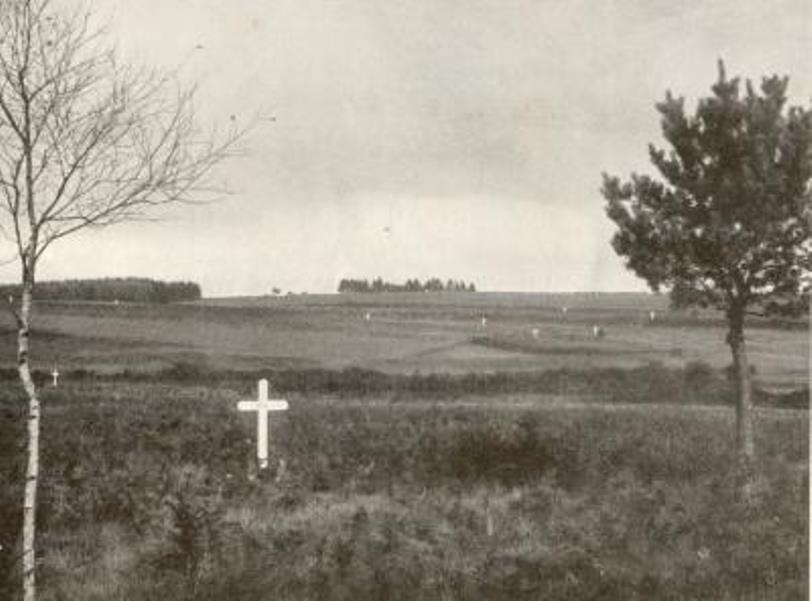 Ironically, General Ernst von Oven has no idea that he has won an impressive victory, and merely counts himself lucky to have fought off the French attack, because all he can see are the wounded German soldiers passing him on their way to the aid stations. Rumors of French victory abound in the ranks even though the five-hour fight has ended with their enemy’s retreat.

Only the French truly understand what has happened tomorrow morning — when they take roll call and discover just how painfully large the gaps in the 33rd Division are. The amazing courage and élan (spirit) of French soldiers has not produced victory, but has rather led them into a meat-grinder. One of the first effects of their panicked retreat is the shedding of dead weight from their 90-lb packs; advancing Germans discover piles of abandoned equipment. 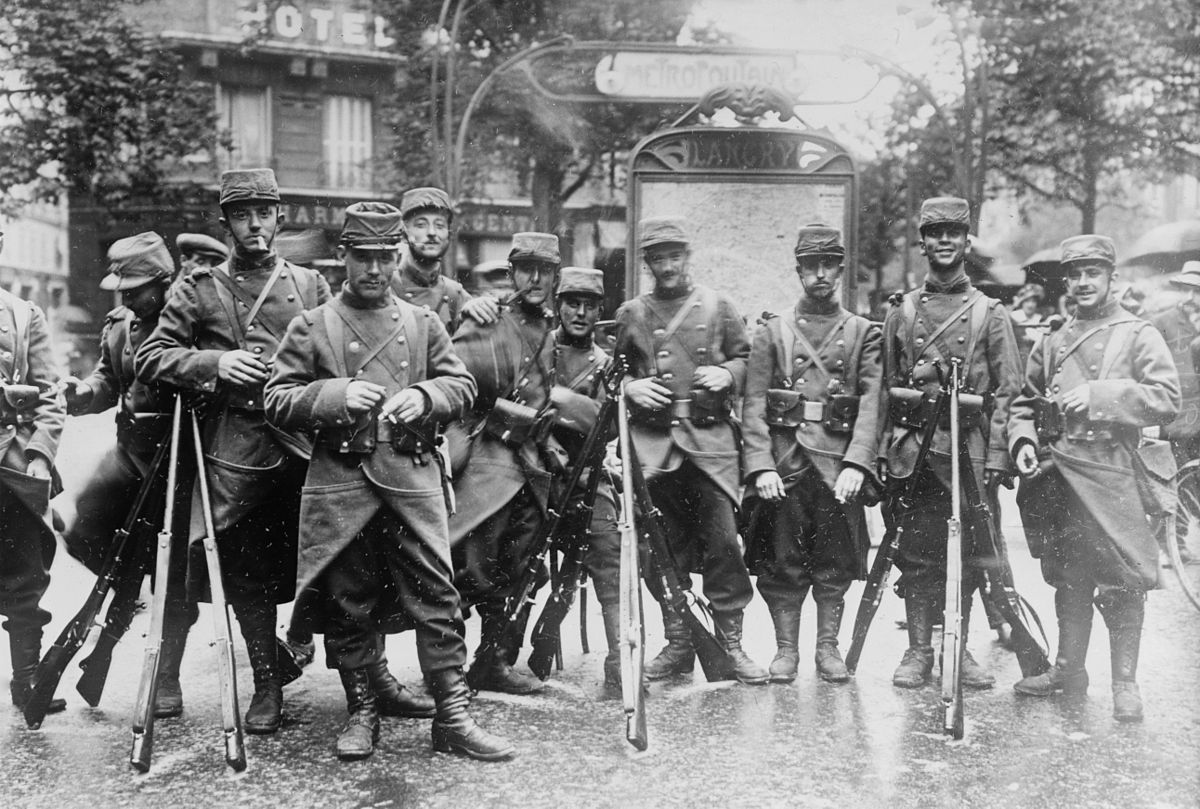 French soldiers are overloaded and kitted for Winter during a hot August campaign. Though courageous, they suffer their bloodiest defeats of the war in these early battles as generals fail to conduct sufficient reconnaissance before ordering them to advance. Forty thousand die in three days

Meanwhile, similar disasters have unfolded at Neufchateau to the east and Charleroi to the west. These early battles are a bloody lesson in planning and preparation: soldiers should not be asked to fight at the end of a long march under a heavy pack, and their artillery support should always be in place while they move through any area where they may encounter the enemy. Reconnaissance is as essential as the weapons men carry — and much else that they carry is dead weight.

All the combatants have overloaded their troops with an excess of baggage on the assumption that they will be marching ahead of their supply lines, and so may need every sort of material item in the field. Rather than speed them along, instead it actually slows them all down greatly. This was already a long-running problem in 1914, and incredibly it is still a common problem for modern soldiers.

In his seminal monograph The Soldier’s Load, American General S.L.A. Marshall recalls Prussian General Scharnhorst’s rather amazing statement a century before this battle that “the infantryman should carry an axe in case he has to break down a door.”

Scharnhorst did not lack for company. You cannot read far into war without noting that among the great leaders of the past there has been a besetting blindness toward this subject. Either they have not deemed it worth mentioning among the vital principles of command, or their thoughts about it were badly confused.

Take Marshal Maurice de Saxe for example since his grasp of moral problems was on the whole profound.

About training he wrote eloquent truths like this one, “All the mystery of combat is in the legs and it is to the legs that we should apply ourselves.” But when de Saxe turned his thoughts to the problem of man’s powers on the battlefield, he said: “It is needless to fear overloading the infantry Soldier with arms. This will make him more steady.”

Making all allowances for the more limited movements during battle and the short killing range of all weapons during the wars of de Saxe’s times, it must still be conceded that on this point he sounds like an ass. Overloading has never steadied any man or made him more courageous. And such dictum runs directly counter to the principles of war and the sound leading of Soldiers. But the words are dangerous, if only because de Saxe uttered them. We too often ascribe to successful men a godlike infallibility, instead of weighing all things in the light of reason. What the Great Captains thought, succeeding generations find it difficult to forget and challenge reluctantly despite an ever-broadening human experience.

Finally, commanders of all these armies must learn to stop reinforcing failure. After the lead brigade had been slaughtered by German fire, the second should never have been ordered to charge the same gap. Reinforcements should be used to exploit success, or to plug holes in the line and avoid defeat. They must never be sent into an ongoing disaster. This seemingly-simple lesson will prove a hard one for all these armies to learn.

Share on FacebookShare on TwitterShare on Google+
Battle of the Frontiers, France, Germany, mobilization
02 - Guns of August, 1914 - War Breaks Out, Western Front
Posted on August 22, 2014