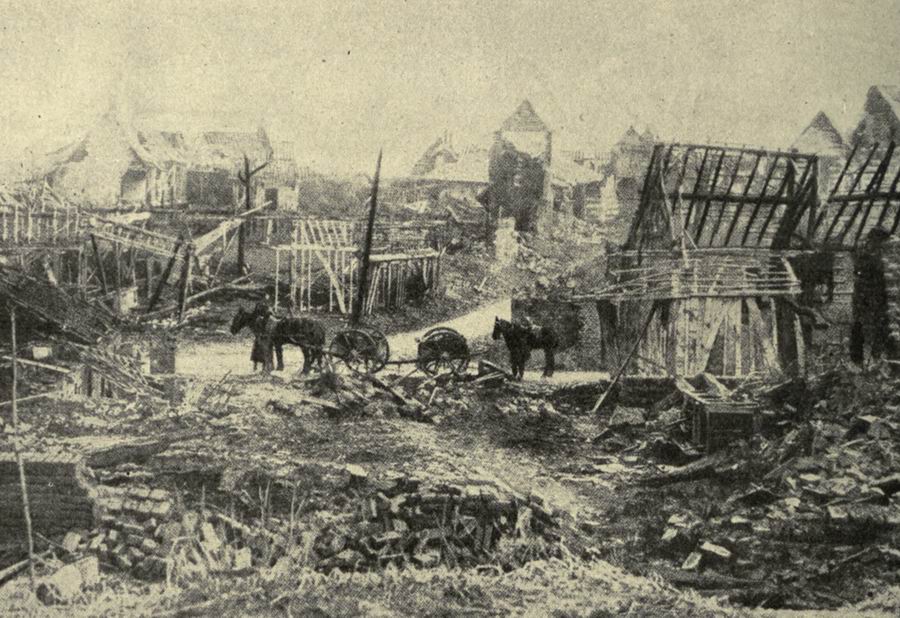 Today the Belgian capital city of Brussels capitulates to the advancing Germans without a fight. Belgian resistance may be collapsing, but French troops have crossed the frontier to meet the invader, and today at Charleroi — a crossroads and river junction that has seen its share of armies clash throughout the ages — everyone learns just what kind of war this really is.

French General Joseph Joffre thinks that it will be a war of French élan, or spirit, versus German tenacity, and that he can win if he meets Germany on the offensive, with bayonets fixed. He has fired generals whose movements he deemed too slow or cautious, not comprehending that the murderously indecisive battles in his southern sector will be repeated in the north.

Joffre’s relentlessness is dictated by Plan XVII, which depends on this army to find the enemy and charge right at him in overwhelming force. Unaware of the true size of the German force in Belgium, Joffre wrongly believes that he can break the German flank here before attacking in the Ardennes. 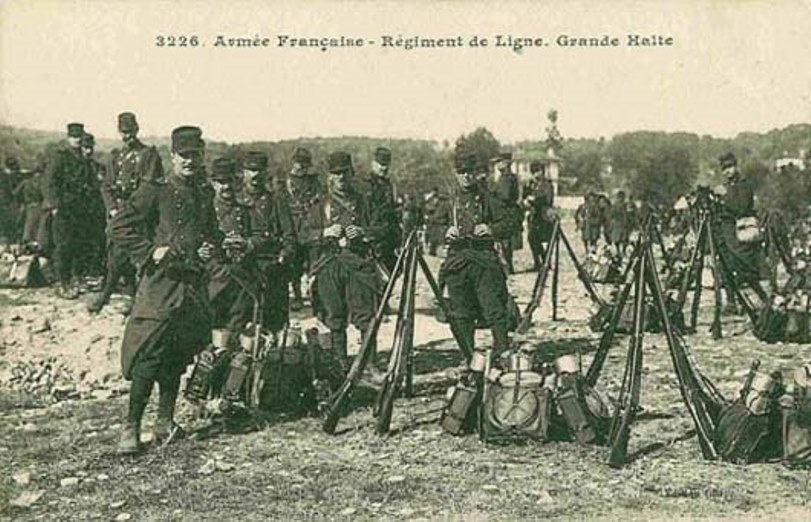 General Charles Lanrezac commands the 5th Army on France’s strategic left, moving to secure a twenty-five mile-wide front between the Belgian fortress of Namur and his British ally’s right flank, when his troops encounter Germans dug into the Northern bank of the Sambre River today. Their opponents are commanded by Karl von Bülow and Max von Hausen, who meet the human tide with machine gun fire and preregistered artillery.

The result of today’s encounter battle is slaughter. On both Eastern and Western fronts, it is immediately apparent to the objective observer that a prepared defender holds tremendous advantages against an enemy attacking in the open. Tacticians and inventors will spend the next four years attempting to solve this problem. 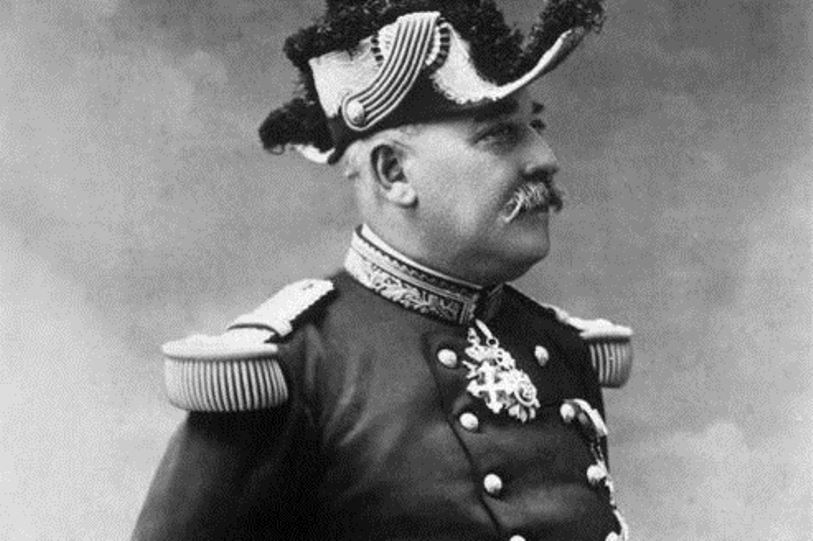 Like artillery, machine guns are crew-served weapons, which is why you can sometimes find the teams listed as artillery batteries in colonial orders of battle from the prewar period. These crews have always found prepared defense an easier task than the hasty attack, which requires moving and aiming their limbered gun carriages under fire. This will prove to be a major problem in trench warfare, spurring the invention of lighter machine guns and trench mortars that troops can use to support their attacks.

It is a commonplace of military procurement that armies spend their peacetime resources training and equipping for their most recent war rather than the next one. So it is with France, which has widely deployed 75 millimeter field artillery pieces that would easily have dominated the battlefields of 1871. German field artillery is more diverse than France’s, but proves just as well-drilled, and often longer-ranged while throwing heavier calibers.

And whereas the Imperial German Army is dressed in verdigris that matches the countryside nicely, the serried ranks of Frenchmen stand out in their pretty blue jackets and red pants, making them perfect targets for German riflemen. 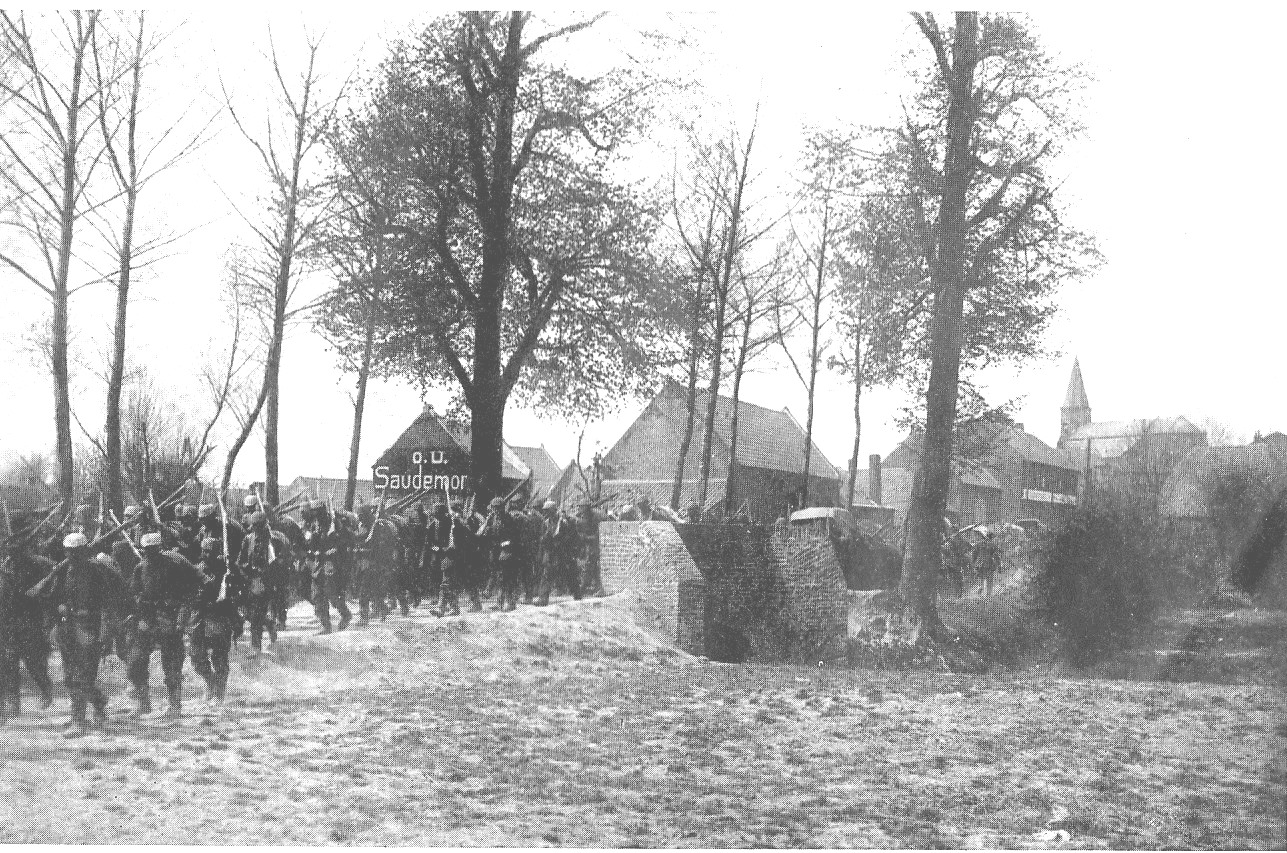 As German troops marched through Belgium, their lines of supply grew longer — and so did their marches. These factors would slow and stall the German advance more than any defender’s resistance

Von Bulow crosses the Sambre River in force tomorrow. Though the Germans sustain thousands of casualties, the French guns are out of position and unable to stop their advance. After a destructive, day-long fight in the streets, French troops are pushed out of Charleroi by repeated infantry attacks — and then slaughtered by German artillery as they rally in the open.

Two days of fighting leave thirty thousand Frenchmen dead on this battlefield, nearly triple the enemy’s losses. While the sacrifices of “brave little Belgium” are later celebrated for temporarily slowing the German steamroller, in fact the Kaiser’s troops are still on the Schlieffen Plan timetable, and France has shown no sign of being able to slow them down.

Indeed, fatigue and lengthening supply lines, not enemy armies, are what finally drag the German offensive to a halt.

Lanrezac is arguably a hero in this battle. Long before Joffre, he understands the danger presented by the number of Germans being encountered, and withdraws rather than be enveloped and destroyed. He even explains this to Joffre, but it takes his superior two more days of disaster at Bertrix and Neufchateu to order his armies to fall back and form a new defensive line. Lanrezac’s caution rankles both Joffre and the British commander, Field Marshall French. Despite having saved their armies from senseless destruction, Lanrezac is fired for his lack of élan at the beginning of September. 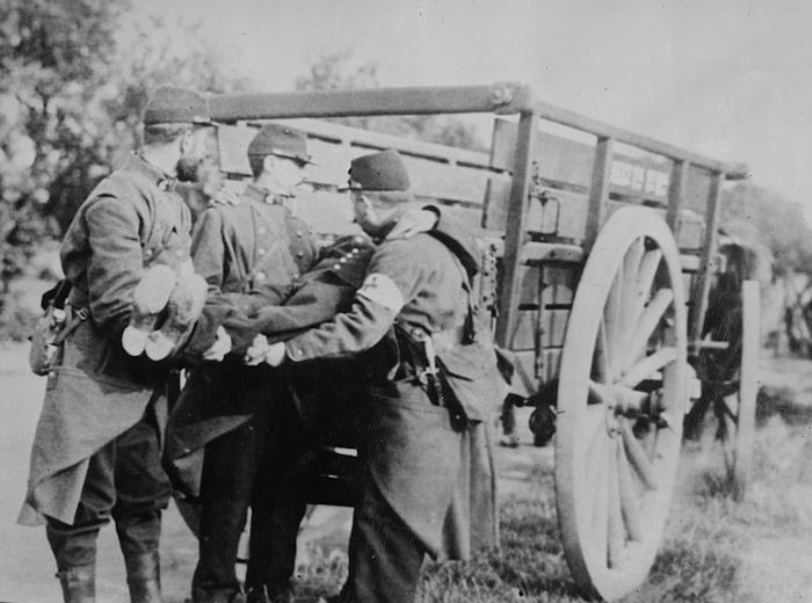 French soldiers removing wounded from the battlefield in a horse-drawn cart. The odds of surviving a day or more in these ambulances were slim; patients were usually untreated and left exposed to the elements

The Germans are not done killing. Unfortunate residents of a small Belgian town named Tamines, situated in the middle of the battlefront, are huddled in their cellars tonight to escape the shelling. Tomorrow they will emerge to find angry German troops arresting the men of fighting age and setting fire to their homes. After herding four hundred civilians into a churchyard, the Germans massacre them with rifles and machine guns. “Brave little Belgium” is paying a terrible price for being in the Kaiser’s way.

Share on FacebookShare on TwitterShare on Google+
atrocity, Battle of Charleroi, Battle of the Frontiers, Belgium, France, Germany, mobilization
02 - Guns of August, 1914 - War Breaks Out, Western Front
Posted on August 21, 2014